French president Emmanuel Macron and his wife Brigitte were at the centre of an astonishing security scare when furious anti-government swarmed towards them in a Paris park.

‘Macron Resign’ was the chant as the 42-year-old head of state and the first lady, who is 67, were approached in the Tuileries Garden, close to the Elysée Palace, where they live, on Tuesday afternoon.

They were walking hand in hand at the end of Bastille Day – the July 14 French national holiday, but this did not deter the demonstrators. 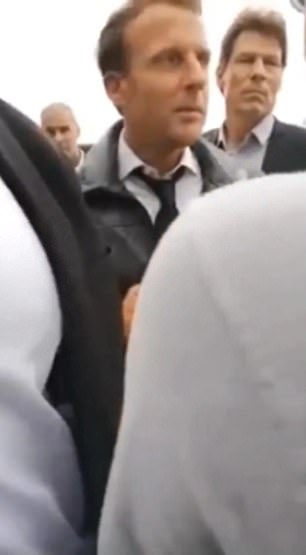 President Emmanuel Macron reasons with protesters as one tells him ‘Mr President, I’m older than you. You are my employee. We are respectful, I did not show you disrespect, not today

‘The black beast – it’s incredible,’ said one, while others booed and swore openly while the disturbing scene was broadcast live on social media, including Twitter and Facebook.

As the couple’s security guards tried to calm the situation, Mr Macron walked towards his tormentors and said ‘Happy July 14’ before trying to usher them away.

He was wearing a black leather jacket, with onlookers noting his resemblance to the Fonz, the character played by Henry Winkler in the American hitcom Happy Days who was obsessed with being ‘cool’.

After a political argument started about police violence against Yellow Vests – the protest movement that has been active in France for almost two years – Mr Macron told the group to ‘stay cool, and there will be no problems.’

As the couple’s security guards tried to calm the situation, Mr Macron walked towards his tormentors and said ‘Happy July 14’ before trying to usher them away 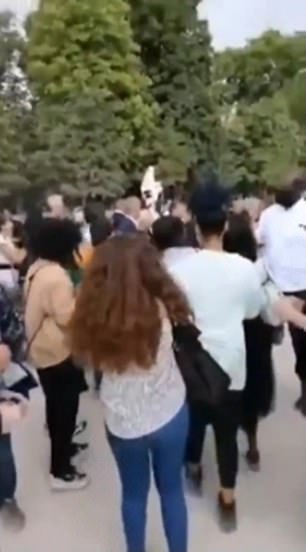 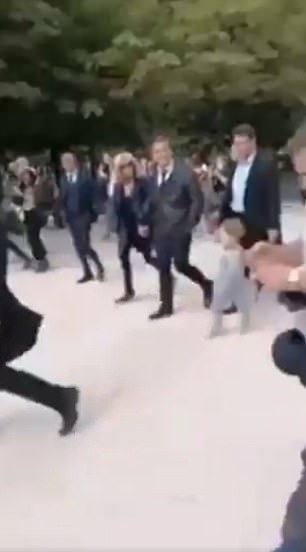 Macron’s (right centre) can be seen walking through crowds (left) in the Tuileries Garden, close to the Elysée Palace, where they live, on Tuesday afternoon

‘It’s a public holiday and I’m going for a walk with my wife,’ said Mr Macron, adding that the protestors are not ‘models of respect’, while he was.

One of the men then said: ‘Mr President, I’m older than you. You are my employee, Mr. President. We are respectful, I did not show you disrespect, at least not today. 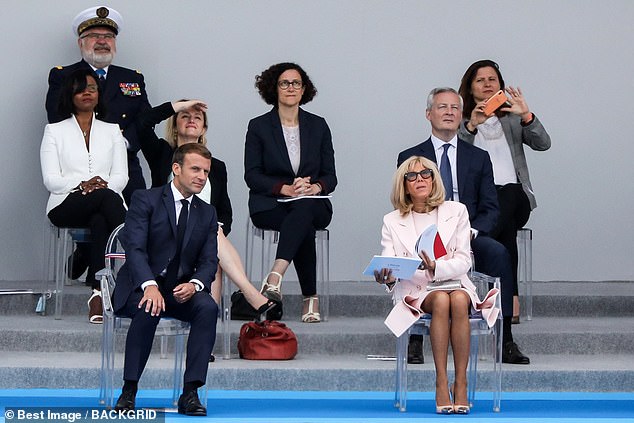 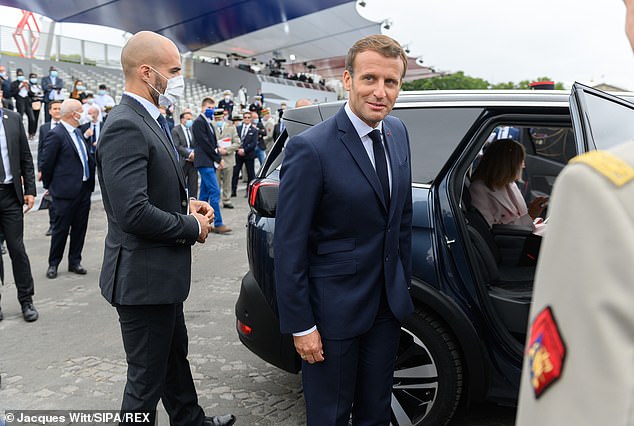 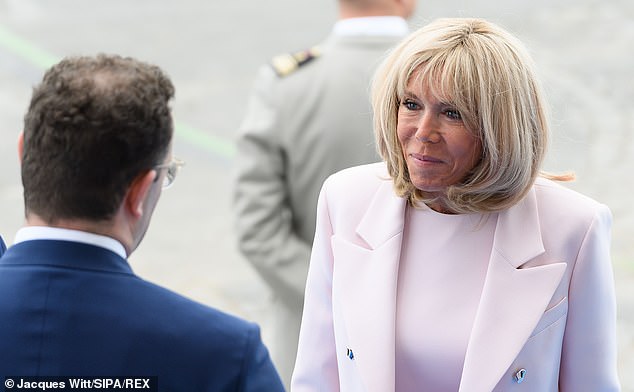 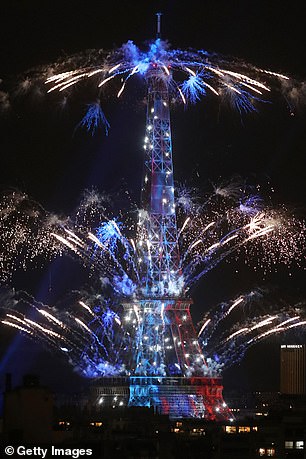 Fireworks explode around the Eiffel Tower during the annual Bastille Day, July 14

This is the year of the next presidential election, when Mr Macron’s first five year term will end.

He then said Mr Macron was due ‘to be fired,’ while also calling for an end to the BRAV (Brigade of Repression of Violent Action) – a rapid reaction police motorbike unit set up last year to deal with rioters.

‘It not the President of the Republic who does that!’ Mr Macron retorts, telling the men not to shout, and to take their complaints to his new Interior Minister, Gérald Darmanin.

Nobody was arrested during the confrontation, and the Macrons were able to make their home to the presidential palace on foot, still surrounded by security guards.

Earlier in the day, Mr Macron had led the traditional Bastille Day celebrations, and also appeared live on TV saying that face masks will become compulsory in all enclosed public spaces in France from August 1 so as to try and prevent a second wave of Coronavirus. 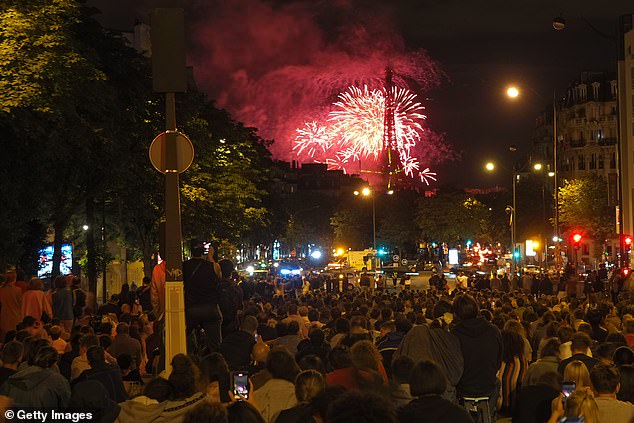 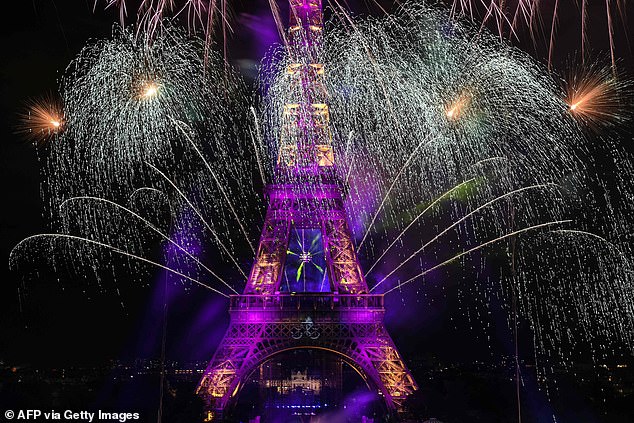 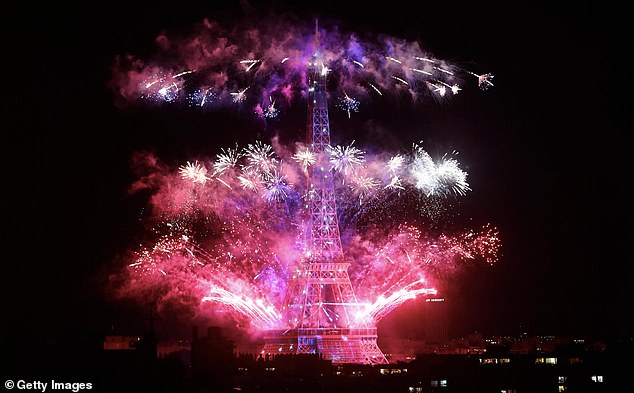 Bastille Day, or French National Day, commemorates the beginning of the French Revolution with the storming of the Bastille fortress and prison on July 14, 1789

In January, Mr and Mrs Macron were evacuated from a packed Paris theatre by armed riot police after a mob of anti-government protesters tried to reach them.

The security scare led to them both leaving the Bouffes du Nord in the 10th arrondissement before the play they were watching ended.

Video posted on Twitter showed around 30 demonstrators storming the doors of the historic theatre, which is close to the Eurostar railway station in the city.