Ten former and one current employee of Ellen’s talkshow claim they faced bullying and racism behind the scenes and that they were even fired for attending family funerals.

The show, which has been airing since 2003, has built a brand around the compassionate slogan of ‘Be Kind’, which ranges from dishing out cash to people who appear on the show and instituting wider charity initiatives.

However, many of the former staffers claim it’s ‘all for show’.

‘That ‘be kind’ bulls**t only happens when the cameras are on. It’s all for show,’ one ex-staffer told BuzzFeed. ‘I know they give money to people and help them out, but it’s for show.’

One black woman claimed she was the subject of racist micro-aggressions and abuse over an 18-month period.

Soon after she was hired she recalled being told by senior producer that ‘I hope we don’t get confused’, by the fact two black employees have box braids.

Pictured: A grab from the Ellen show last year as the host speaks to Killing Eve star Jodie Comer. Ten former and one current employee of Ellen’s talkshow claim they faced bullying and racism behind the scenes and that they were even fired for attending family funerals

She was also allegedly told by one of the show’s writers: ‘I’m sorry, I only know the names of the white people who work here.’

The employees pinned the blame on executive producers rather than Ellen herself but accused Degeneres of not being involved enough to see what was happening on her show.

‘If she wants to have her own show and have her name on the show title, she needs to be more involved to see what’s going on,’ one ex-employee said.

They added that it seemed like the executive producers told the host ‘things are going great, everybody’s happy’, and that she ‘just believes that’.

They say Ellen should be checking the wellbeing of her staff herself.

‘Over the course of nearly two decades, 3,000 episodes, and employing over 1000 staff members, we have strived to create an open, safe, and inclusive work environment,’ read the announcement written by Ed Glavin, Mary Connelly and Andy Lassner.

‘We are truly heartbroken and sorry to learn that even one person in our production family has had a negative experience, it’s not who we are and not who we strive to be, and not the mission Ellen has set for us.’

‘For the record, the day to day responsibility of the Ellen show is completely on us. We take all of this very seriously and we realize, as many in the world are learning, that we need to do better, are committed to do better, and we will do better,’ the statement added.

The same African-American employee said she asked producers not to use terms like ‘spirit animal’ and was referred to as the ‘PC police’ by colleagues.

She brought up the issue to her white boss, who would use the fact he had a black friend to say, ‘I understand your struggle’, she said.

‘But it was all performative bulls**t’, she added.

Eventually she walked out of the show one day and never returned.

‘I feel angry about the way I was treated, and I am always going to stand up for Black, Indigenous, Latino, and Asian people, regardless if they’re around,’ she told BuzzFeed. ‘I can’t not say anything. I’m not going to stop talking.’

One former employee added to the allegations, saying: ‘I think it is a lot of smoke and mirrors when it comes to the show’s brand.

‘They pull on people’s heartstrings; they do know that’s going to get likes and what people are going to go for, which is a positive message. But that’s not always reality.’ 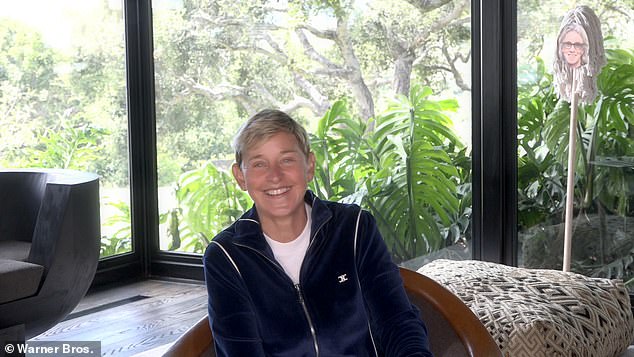 Another, who had been working on the show for a year, returned after being checked into a mental health facility following a suicide attempt to find that her position was terminated.

‘You’d think that if someone just tried to kill themselves, you don’t want to add any more stress to their lives,’ the employee said.

They said that the producers talk ‘openly’ about mental health but that ‘they’re the reason there is a stigma’.

Another former employee said they had a tough year, in which they had to battle supervisors and HR for time off, but they were finally fired after a family funeral.

A current employee revealed, anonymously, that the show’s producers held a meeting with all staff to address the current allegations.

Earlier this month, producers for the show were forced to confirm that rumors about the show being cancelled amid multiple reports of unkind off-camera behavior were ‘untrue’.

DeGeneres has been slammed on social media after multiple reports surfaced in April painting an uncomfortable picture of the way she treats others when the cameras aren’t rolling.

A group of around 30 crew members were upset after she hired an outside company called Key Code Media to film the shows, and also rankled at what they called a lack of communication or transparency about their jobs following the March shutdown amid the coronavirus outbreak, Variety reported in April.

‘Higher-ups in production would occasionally answer phone calls but reveal little’ to the crew members, who had their pay slashed by 40 percent amid changes brought about by the virus, insiders told the outlet.

Sources told the outlet that this was not the case with all the shows, as crews for John Oliver, Desus and Mero and Samantha Bee were paid their full rates, while Jimmy Kimmel dipped into his own pocket for a time to keep his staff getting their regular rates.

Producers responded that ‘Our executive producers and Telepictures are committed to taking care of our staff and crew and have made decisions first and foremost with them in mind.’

Her character also came under fire after a series of tweets from comic Kevin T. Porter March 20 asking his followers to post ‘insane’ tales of ‘Ellen being mean’ caught the attention of social media. (Porter’s effort was linked to a charity drive for the Los Angeles Food Bank.)

Writer Ben Simeon said that ‘a new staff member was told, ‘Every day she picks someone different to really hate. It’s not your fault, just suck it up for the day and she’ll be mean to someone else the next day.’ They didn’t believe it, but it ended up being entirely true.’

‘Everyone must chew gum from a bowl outside her office before talking to her and if she thinks you smell that day you have to go home and shower.’

Ellen – who Forbes reported is worth around $330 million – has also caught flak for tone deafness after joking that locking down in her opulent mansion was ‘like being in jail.’