A baby gorilla was found sobbing like a child as its wrist was gripped in a vicious snare in the Rwandan jungle.

Rangers wept at the sight when they found the three-year-old strung up in cable by her arm, crying for her family.

She was reunited with her family, but others are not so lucky facing amputation and death in the Volcanoes National Park.

The apes are at constant risk in the war-torn region as starving locals are forced to lay traps to catch animals for food like antelope, but can end up snaring the gorillas.

A three-and-a-half-year-old gorilla hangs from the snare set by poachers in the Volcanoes National Park, luckily rangers were able to treat her and take her back to her family 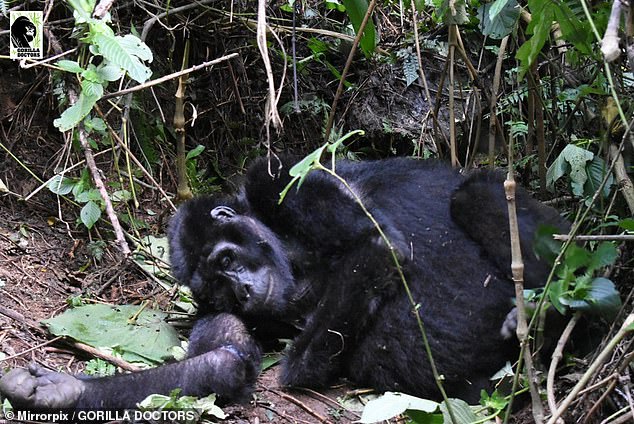 Dr Jean Bosco Noheli told the Mirror: ‘The rangers cried when they found this infant.

‘She was hanging, a baby on her own struggling to get free, calling for help.

‘We released her and held a small stretcher for her to fall on to, then carried her to her family.’

Vets and rangers in the Virunga mountains work tirelessly to ensure the safety of the endangered species.

Sir David Attenborough’s Life on Earth brought massive public attention to the plight of the great apes when it aired in 1979. 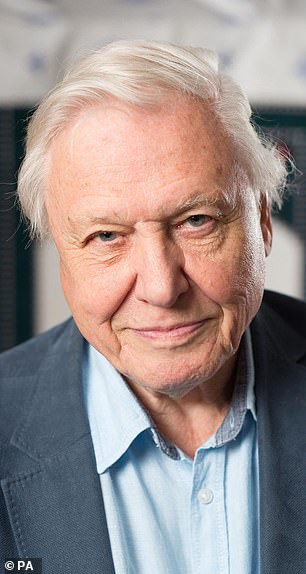 Money donated to their cause, as well as carefully managed eco-tourism has brought expert care and protection to the animals.

Numbers of gorillas since Sir David’s visit have rocketed from just 250 to over 1,000, the Mirror reported.

But they are still in constant peril and face being ripped apart by bullets in the cross-fire of horrific conflicts in the Congo.

The rangers showed how the traps are made by starving locals out of bamboo and synthetic twine which can cut deep into the apes’ flesh.

Dr Noheli described many an amputation being carried out on gorillas who had been mutilated by the traps set by locals.

Ian Redmond is a biologist who has worked out there for decades and showed Sir David the region when he was filming with the BBC those 40 years ago.

Mr Redmond was known as ‘The Panga’ – meaning ‘the machete’ – by the locals who had their traps cut down by him.

Such was their desperation, one of the locals described how, despite knowing it was wrong, they continued to set up their snares because they were driven by hunger.