Life-saving brain surgery has been performed on an endangered New Zealand parrot in a procedure marking the first of its kind.

During the world-first procedure, vets at Massey University’s Wildbase Hospital were able to treat the kakapo parrot, who was born with a hole in its skull, by applying the surgical techniques used on humans and other mammals.

The now 56-day-old bird, known as Espy 1B, is being kept under the watchful eye of vets and is said to have made a ‘remarkable recovery’ following the pioneering operation.

The 56-year-old kakapo, known as Espy 1B, underwent pioneering brain surgery to treat the hole in its skull 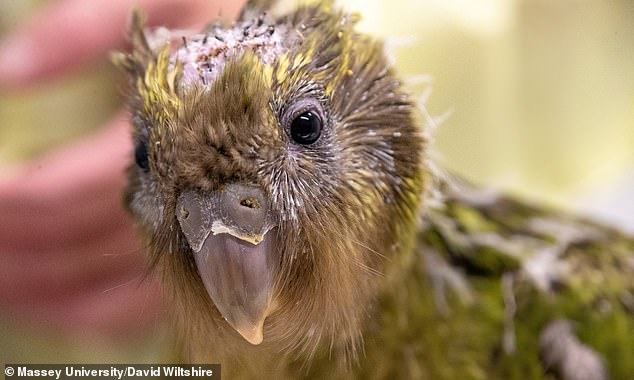 Rangers at the Department of Conservation’s Kakapo Recovery Team first noticed the endangered bird required critical attention when it began displaying a strange  lump on its skull after hatching.

After the parrot was taken to Massey University’s Wildbase Hospital, vets soon discovered that the bird only had a thin layer of tissue separating its brain from the outside world and immediately set about carrying out the ground-breaking surgery.

The bird will now remain under close observation at the university’s hospital before it is transferred back to the Dunedin Wildlife Hospital later this week.

Describing the moment he knew the bird required urgent attention Professor Brett Gartrell, director of Wildbase Hospital, said in a statement: ‘The CT scan showed that the plates of its skull had not completely fused and the fontanelle was still open.

‘The chick was hatched with a hole in its skull that allowed part of the brain and dura (the tough barrier around the brain) to herniate out, the technical term for this condition is a meningoencephalocoele. 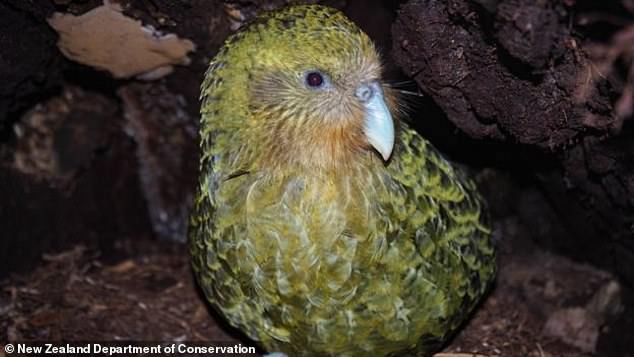 Kakapo’s are classified as a critically endangered species and remain the world’s only flightless parrot. (Stock image)

‘In humans, this spot fuses after birth, but this is highly unusual in birds as the skull has finished fusing prior to hatch. The concern was that if this tissue was damaged this would open the brain to trauma and infection.’

Kakapo’s are nocturnal forest-dwelling birds that remain the world’s only flightless parrot and are often seen roosting in trees or on the ground.

Despite not being able to fly, the birds are able to use their strong legs to climb tall trees and use their short wings to act as a parachute as they travel through the forest.

According to the International Union for the Conservation of Nature (IUCN), the birds, which are also the heaviest species of parrot, are classified as a critically endangered species, with only 147 adult kakapo’s remaining in the world.

WHAT IS THE KAKAPO?

They have a rather poor defence strategy when they are startled or scared and simply freeze and stand still, making them easy pickings

Although it is flightless, the animal walks long distances and is relatively mobile on its sturdy legs

The animals only mate once every five years or so when the native rimu trees provide fruit. The reason for this is unknown