The end of Covid-19 restrictions in England is premature and ‘not based on current evidence’, according to the British Medical Association.

Experts have warned an absence of testing and self-isolation will lead to a surge in cases in the country.

Prime Minister Boris Johnson said he will present his plan for ‘living with Covid’ when Parliament returns from a short recess on February 21, with an aim of lifting the requirement to self-isolate by February 24.

Dr Chaand Nagpaul, chair of the BMA council, told the Guardian the decision was ‘not based on current evidence and is premature,’ adding: ‘It clearly hasn’t been guided by data or done in consultation with the healthcare profession.’

He said case rates remained exceptionally high, with one in 20 infected last week, according to the latest Office for National Statistics survey.

The government has formed a strategy for living with covid, which is expected to include the scrapping of free mass testing.

Yesterday it was revealed UK Health Security Agency bosses logged 47,685 positive tests over the past 24 hours, a fifth down on last week’s count.

The rolling seven-day average number of daily cases, considered a more accurate measure, has dipped to below 47,000, mirroring levels seen at the start of December before Omicron had properly taken off.

Daily hospital admissions across the UK have fallen by 8 per cent over the same time-frame as the pressure on the NHS continues to recede. And deaths have fallen by 18 per cent, with 158 victims recorded today.

Chancellor Rishi Sunak wants a rapid end to the expensive testing scheme, while health secretary Sajid Javid is keen to keep the regime for longer.

Chris Hopson of NHS Providers said Monday’s plan should not ‘simply be a celebration about the removal of restrictions’, although it is right for ministers to start deciding on a future plan.

‘I think it’s really very unwise indeed. I don’t really understand why that’s being introduced. I appreciate there are concerns about absences but at the same time what we know about this virus is that it is not good for people. Treating it as a harmless virus, we think that is unwise.’

Experts on SPI-M-O, a modelling subgroup that feeds into Sage, have warning the end of testing will lead to rapid epidemic growth of the virus. 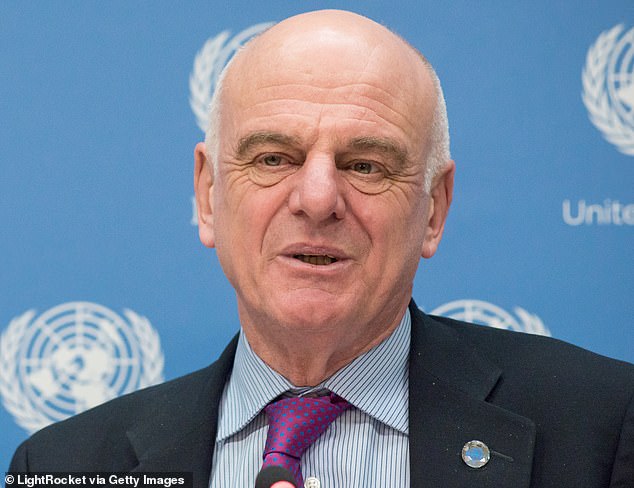 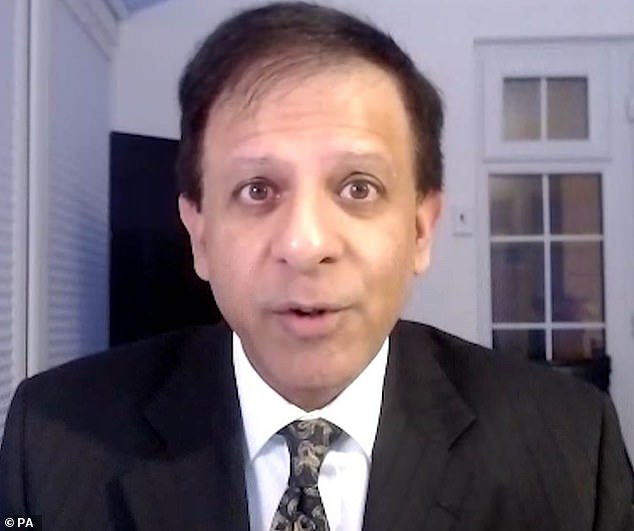 Dr Chaand Nagpaul (pictured), chair of the BMA council, told the Guardian the decision was ‘not based on current evidence and is premature,’ adding: ‘It clearly hasn’t been guided by data or done in consultation with the healthcare profession’

Estimates from a team at the University of Warwick found the current measures were reducing virus transmission by 20-45 per cent.

If these restrictions are taken away transmission could increase by around 25-80 percent, the group found.

A Department of Health and Social Care spokesperson said: ‘We continue to monitor the data closely and next week we will set out our plans on how we will live with Covid-19 in the long term.’

It comes after Mr Johnson piled the pressure on Nicola Sturgeon and Mark Drakeford to scrap the last remaining Covid curbs after he dramatically announced his intention to axe all virus restrictions in England by the end of the month.

The current self-isolation rules expire on March 24, but the Tory leader told MPs at Prime Minister’s Questions that ‘provided the current encouraging trends in the data continue, it is my expectation that we will be able to end the last domestic restrictions — including the legal requirement to self-isolate if you test positive — a full month early’. 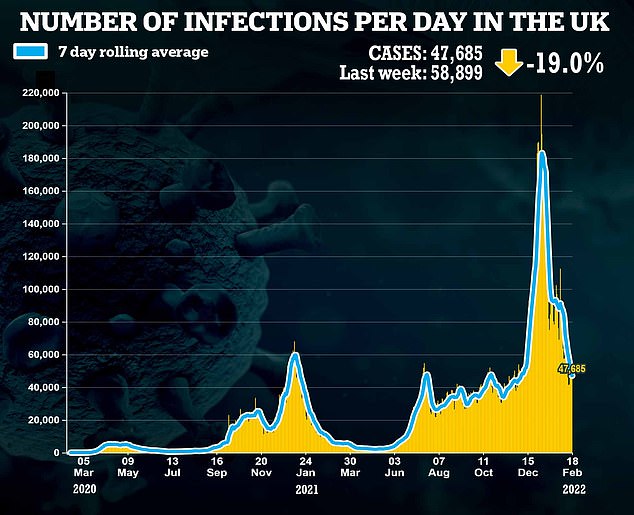 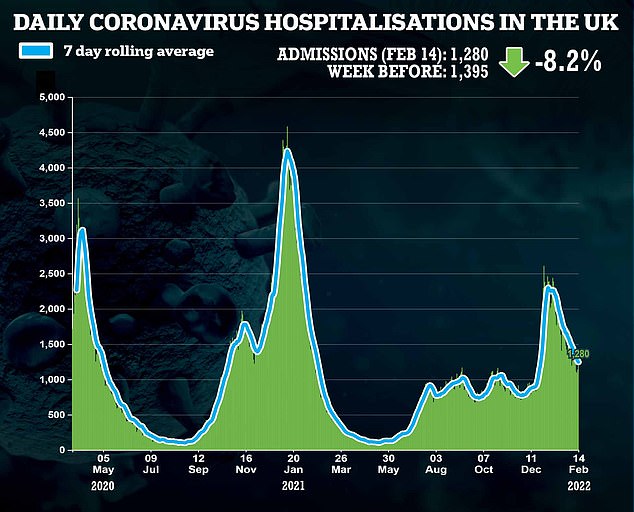 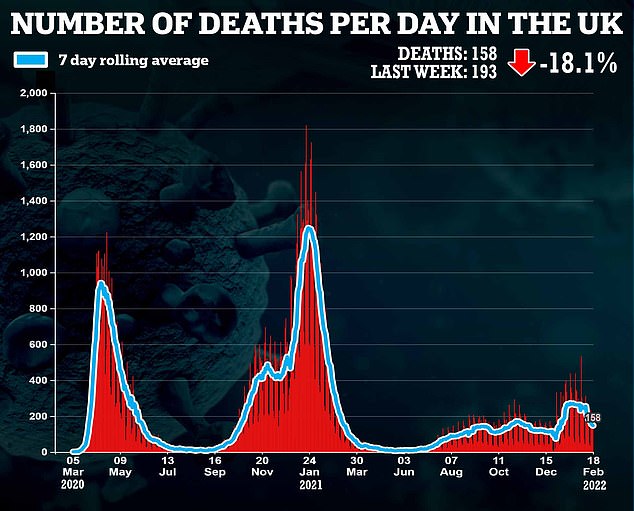 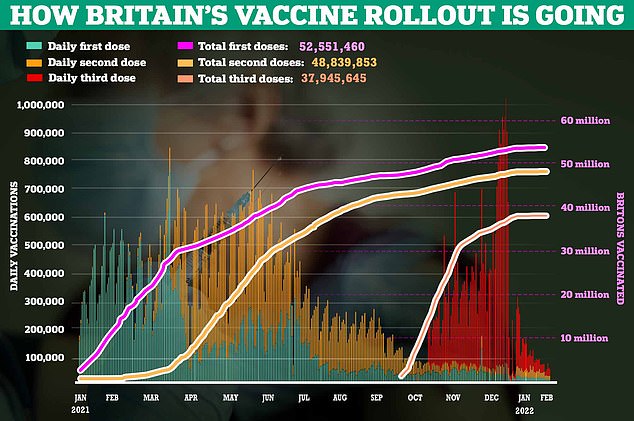 Mr Johnson said he will present his plan for ‘living with Covid’ when Parliament returns from a short recess on February 21, with an aim of lifting the requirement to self-isolate within days of that.

But yet another rift appears to be opening up between Mr Johnson and Miss Sturgeon’s response, with a spokeswoman for the Scottish Government saying that the UK Government ‘failed to provide devolved nations with appropriate notice to consider implications ahead of the announcement by the Prime Minister’.

She said Scottish ministers are urgently seeking clarity from the UK Government to consider any implications its announcement could have for Scotland, adding: ‘Regardless of decisions made by the UK Government, it is vital that Scotland can continue to access funding to support the policy decisions taken in Scotland in response to Covid-19.’

The spokeswoman added: ‘Isolation and mask-wearing have been among the most effective non-pharmaceutical interventions in supressing Covid spread.

‘All public health measures are kept under continuous review, including guidance on self-isolation. Decisions are informed by the latest scientific and clinical advice as well as careful consideration of the four harms.’ 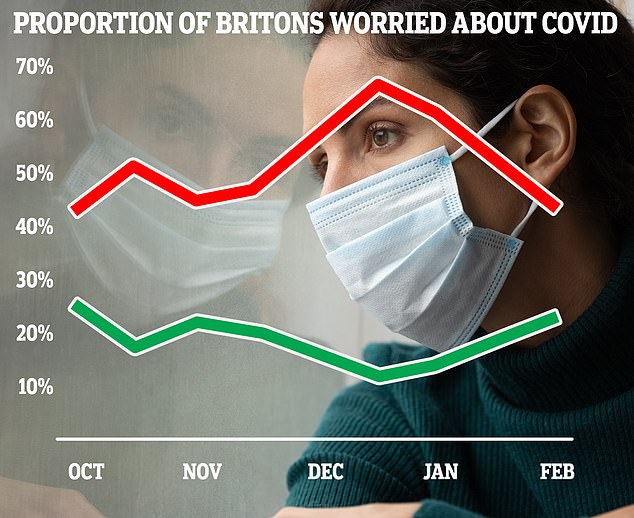 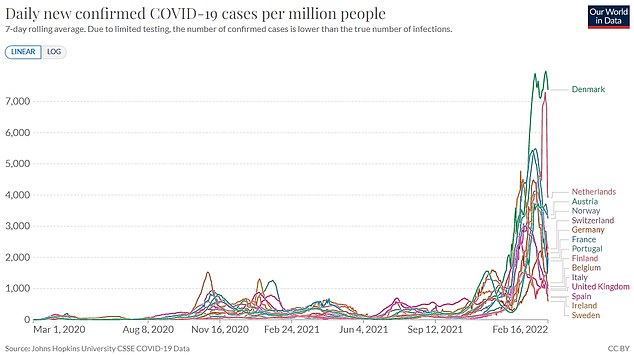 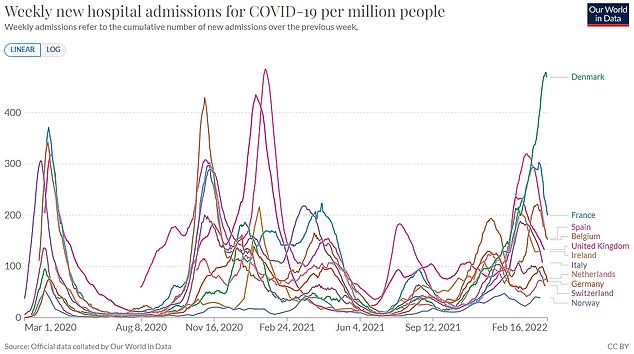 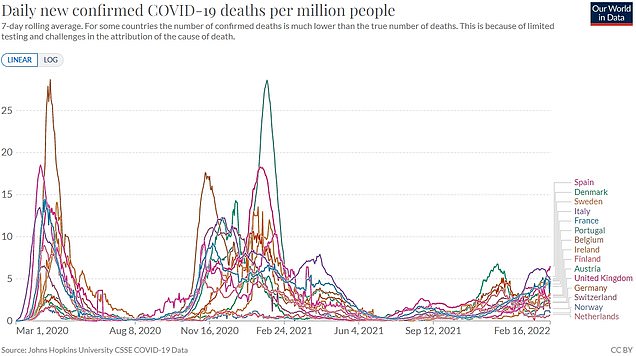 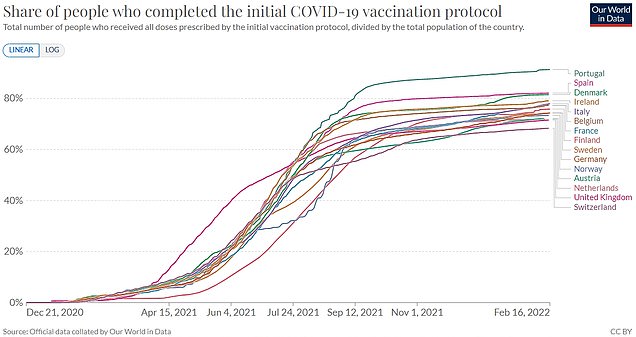 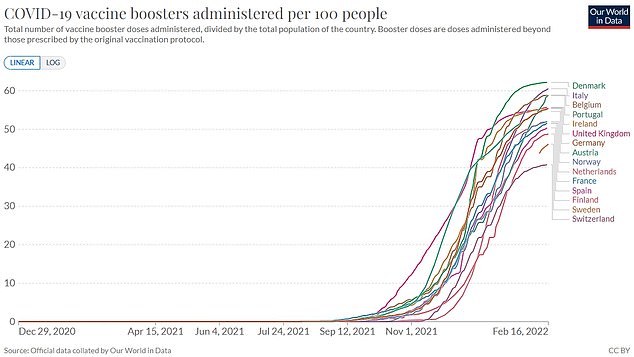 Scottish, Welsh and Northern Irish leaders came under pressure to follow Mr Johnson’s lead and axe Covid rules to bring the UK out of two years of restrictions together.

Miss Sturgeon left the country’s Covid measures unchanged, including enforced mask wearing by schoolchildren, telling Holyrood a ‘significant fall’ in infection levels the country has seen in recent weeks had now ‘levelled off’.

She told MSPs a meeting of her cabinet had decided that the remaining baseline measures would stay in place ‘for now’. But she is facing pressure from the Scottish Tories, who called for the scaling down of Test and Protect, a phased end to all legal restrictions and a new levels system which will be aligned to data on the virus.

Both Miss Sturgeon and Labour’s Mark Drakeford in Wales have been far more cautious about removing curbs. The Scottish First Minister is due to release her plan for living with Covid later this month — but Mr Drakeford has not revealed whether he will follow the PM’s lead.

It came a week after Denmark became the first nation to drop all of its coronavirus laws, including the need to self-isolate. But the nation’s policymakers still advise anyone with tell-tale symptoms to quarantine at home for at least four days, raising the prospect that England could go one step further.

Sweden joined its Scandinavian neighbour in dropping almost all restrictions, but people must still isolate until April 1. Norway is also intending to drop its final measures on February 17 — a week before Mr Johnson — but people with the virus will still legally need to stay at home.

Statistics show the UK is currently recording seven times fewer positive tests each day than its European rival, and other Western nations.

Despite the array of promising figures and milder nature of Omicron having changed the course of the pandemic, Mr Johnson was warned not to scrap Covid rules to ‘get out of a hole’. Scientists also voiced ‘surprise’ and said the government could be making a ‘profound mistake’ by giving up tools to track the virus.

The PM — who had already said he wanted the rules to expire naturally on March 24 — made the dramatic announcement at the start of PMQs in the Commons. The step was greeted with roars in the chamber, with many Tories having been pushing for the Government to draw a line under the pandemic with the country having been subject to virtually unprecedented peacetime restrictions since early 2020. Plan B requirements for people to work from home where possible was dropped last month, along with most face mask rules and compulsory Covid passes.

Labour leader Keir Starmer insisted he is holding back on whether the restrictions should be eased, but shadow health minister Justin Madders made clear the party needs convincing that the step is ‘a result of scientific advice and not based on protecting his political position’.

The news could give Mr Johnson a much-needed boost as he battles to cling on amid damaging Partygate allegations.

Lord Frost, who dramatically quit Cabinet partly in protest at draconian curbs, was among the senior Tories praising the move. ‘The PM’s plan to end all Covid restrictions a month early is the right thing to do & is extremely welcome. I hope the government will also make clear we will not go down the road of coercive lockdowns ever again,’ he tweeted.

What are the current Covid rules in England? And how could they change this month?

Current Covid restrictions are due to expire in England on March 24. But Boris Johnson has now told MPs that the remaining domestic rules would end a month early ‘provided the current encouraging trends in the data continue’.

This would remove the requirement for people to self-isolate if they have Covid symptoms or test positive.

He said that the Government would outline its new strategy when parliament returns from recess on 21 February, and would expect to lift the rules later that week.

The few measures left in England include: