Engineer killed himself after Bristol acid attack by ex-girlfriend

An engineer who killed himself just over a year after his ex-girlfriend through acid over him may have been trying to hurt her with it instead, a court heard today.

Mark Van Dongen, 29, was left almost unrecognisable after being doused in acid in the early hours of September 23 2015.

His former lover Berlinah Wallace, 48, is accused of creeping in on him while he was asleep and saying ‘If I can’t have you, no one else can’ before throwing the corrosive liquid in his face.

Berlinah Wallace (pictured), 48, is accused of murdering her ex-boyfriend Mark Van Dongen, 29, after she attacked him with acid, which led him to go to suicide clinic

Dutch-born Mr Van Dongen was left blind in one eye, unable to move his body from the neck down and he had to have one of his lower legs amputated.

After 15 months of pain he decided he could no longer take it and died at a euthanasia clinic in Belgium, where his family lived, in January last year.

Wallace, a fashion student, is on trial at Bristol Crown Court for her former partner’s murder.

But jurors heard today there are ‘two sides to every story’ and her defence team claimed Mr Van Dongen had put the acid in a glass so she would drink it.

Richard Smith QC, defending Wallace said it was the defence’s case that the relationship had hit such a low they were physically abusive to each other and had both made claims about abuse from the other.

‘Berlinah Wallace said to the police that she did pick up the glass and throw the contents over her boyfriend but thought it was water,’ Mr Smith told the jury.

‘The critical issue right in the middle of this case is what she thought was in that glass when she cast it over her boyfriend.

‘She thought it was water because every evening at night her boyfriend would leave a glass of water with which to take her medication. 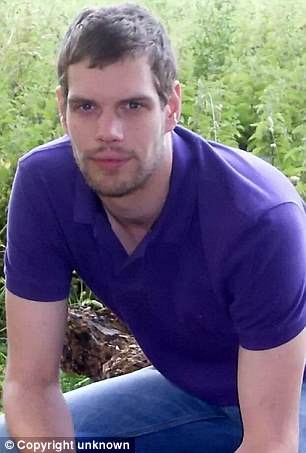 Mark Van Dongen, 29, was left almost unrecognisable after the attack in the early hours of September 23 2015

‘She thought on that night she was being encouraged to take her water, Mark Van Dongen had not put water in the glass to take her tablets, he had put sulphuric acid in.

‘In the dark times of this difficult relationship there had been suggestions made to her by Mark Van Dongen that she might alleviate her depression by taking sulphuric acid – a rather bizarre and cruel observation.

‘He planned to make her suffer, not him. If that is right then his plan has gone horrendously wrong.’

Mr Smith said the evidence would show that the pair had spent the previous evening together and Wallace had not left Mr Van Dongen alone in the flat.

He also suggested the Dutch engineer was worried about Wallace revealing details of his private life.

‘If that was so it might give him a motive and he talked about being blackmailed, and he felt he was going to take the action Berlinah Wallace said he was,’ Mr Smith said.

‘An open mind please, members of the jury. Calm, without emotion, it might not be the way that it seems.

‘Mark Van Dongen might be the author of his own misfortune.

‘When he ran into the road and got into the ambulance he couldn’t possibly say it was his fault because he knew if he told the truth that he would at very least cause severe injury, if not kill his girlfriend.’

He said: ‘On September 2 2015, the defendant had bought a bottle of sulphuric acid. She kept it in her kitchen.

‘At around 3am on September 23, as Mr Van Dongen was sleeping in bed, she took the acid into the bedroom.

‘She then went into the bedroom and woke him up.

‘She laughed and said ‘If I can’t have you, no-one else can’, and she threw the glass of sulphuric acid into his face.

‘It covered his face and parts of his upper body and dripped on to his lower body as he moved about. 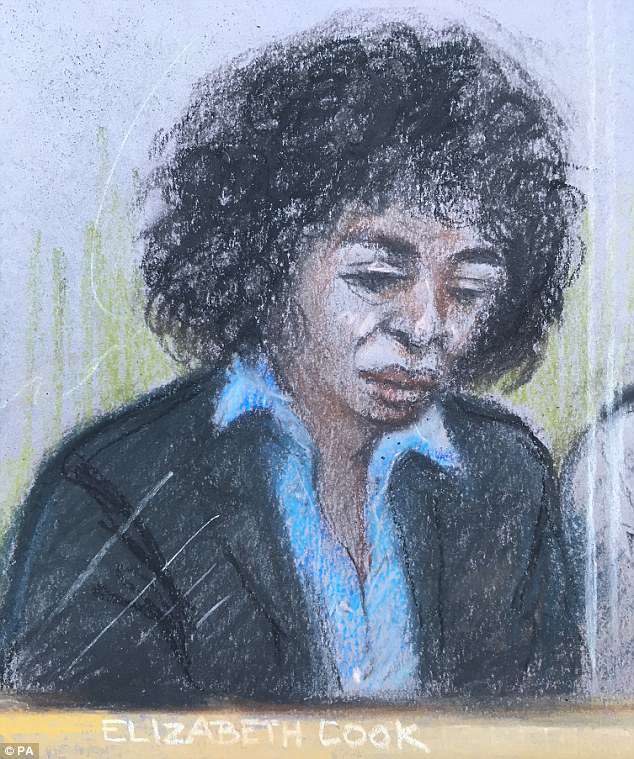 His former lover Berlinah Wallace (sketched in court today), 48, is accused of creeping into his bedroom while he was asleep and saying ‘If I can’t have you, no one else can’ before throwing the corrosive liquid in his face

‘Covered in burning acid, Mr Van Dongen ran out into the street in his boxer shorts, screaming for help.’

A neighbour took him upstairs, put him in a shower and called 999, and he was taken to Southmead Hospital, the court heard.

‘The injuries that he suffered were grotesque and horrific.

‘His face and much of his body was grotesquely scarred,’ the prosecutor added.

‘He was confined to a hospital bed, for a long time unable to move anything other than his tongue.

‘His physical condition improved a little – he regained the power of speech, though never the ability to move.

‘But 15 months later, deciding that he could bear it no longer, he asked a euthanasia clinic in Belgium to assist him in taking his own life. 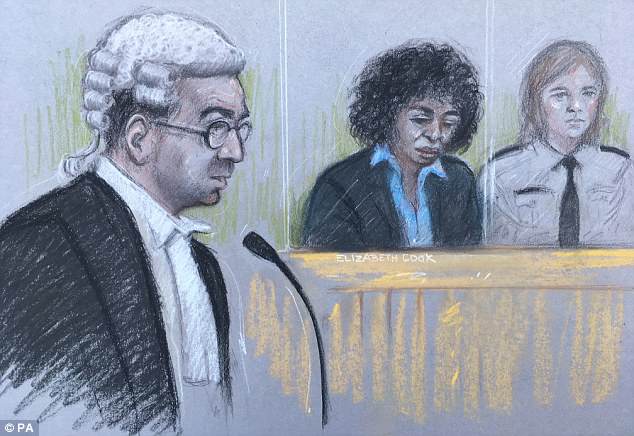 ‘He was examined by three consultants, who confirmed that this was, in their terms, a case of unbearable physical and psychological suffering despite maximum medical support.

‘They agreed the test for euthanasia was met, and on January 2 2017 they inserted a catheter into his heart, which brought about his immediate death.’

‘It is the prosecution case that the defendant deliberately threw acid at Mr Van Dongen, intending to cause him serious harm,’ Mr Vaitilingam added.

‘She admits throwing it but denies any intent to cause him harm. She says that she believed that what she was throwing over him was a glass of water.

‘It is the prosecution case that the physical and mental suffering that he sustained from that deliberate acid attack were what drove him to euthanasia.

‘Put simply, he could not bear to live in that condition. If that is right, we say, then she is guilty of murder.’

Later, the jury were shown harrowing video footage where Mr Van Dongen was interviewed by police in hospital.

He confirmed he shared a rented flat with Wallace where they had lived for five years, and that he arrived at about 6pm when she was there.

Mr Van Dongen told police he had been asleep in bed when Wallace woke him up and said: ‘If I can’t have you, no-one can.’

He recalled there being a square plastic box with an inch of acid in.

‘I was wearing just boxer shorts. She threw acid. I was crying “Help!”

‘I was running in the street. Neighbours took me into a house and called police.’

When asked why Wallace threw the acid over him, he said: ‘It was because she was jealous.’

Neighbours in Bristol were woken by the noises of a man in distress and went to his aid, not knowing whether it was a prank or someone on drugs.

Thomas Sweet went to assist and said the man was saying something about having acid thrown on him.

‘It looked like paint and he was talking about acid. I thought he had taken some acid and had been at a rave and had a bad time.

Mr Sweet was joined by other neighbours and they took him to a flat for a shower, which happened to be directly above Wallace’s home.

‘He became distressed and said “She lives there, she lives there”. I took that to be the person who potentially attacked him.

‘His eyes were very bloodshot. It looked to me like his skin had been bleached. He said “That bitch did it to me” and said it was his ex.

‘I informed him the police were coming and he said “They need to be there and she needs to pay”.’

Mr Wooding’s flatmate Ellena Ellcocks told the jury: ‘He looked wet or looked like he had been dunked in grey paint or clay.’

Ms Ellcocks said she walked past Wallace’s front door, saw it was open and could see the defendant.

‘It seemed like she was on the telephone and she was speaking in hushed tones and she said something along the lines of “He abused the situation”.’

Another neighbour Nicola White was awoken by screams and went outside to assist, helping Mr Van Dongen into the flat and the shower.

‘The water was dropping off him like the man was waterproof and he was standing there with blood shot eyes and screaming in pain.

‘He said “I told her I was leaving and she did this to me”.’

Wallace, of Ladysmith Road, Westbury Park, Bristol, denies charges of murder on a date between September 22 2015 and January 3 2017 and applying a corrosive fluid with intent on September 23 2015. 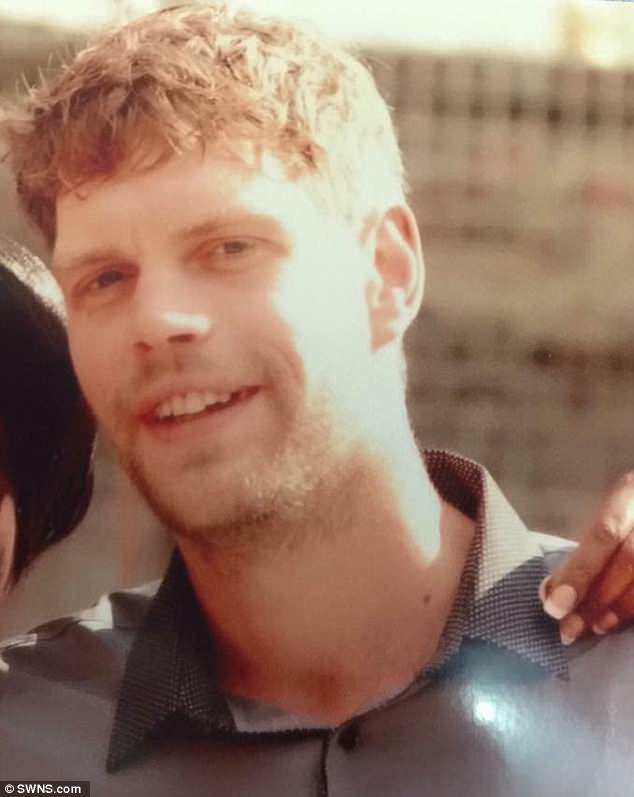 After 15 months of pain Mr Van Dongen (pictured) decided he could no longer take it and died at a euthanasia clinic in Belgium, where his family lived, in January last year