‘I was cross because I wanted to go on and score 200’: England century hero Jonny Bairstow furious with himself for getting out in victory over Pakistan

Jonny Bairstow reflected on his match-winning England century by admitting his Indian Premier League stint has taken his game to new heights.

Bairstow blasted his seventh one-day international ton – 128 from 93 balls – as England beat Pakistan by six wickets at Bristol to take a 2-0 series lead with two games to play.

The 29-year-old continues to impress after his recent spell for IPL side Sunrisers Hyderabad, where he scored 445 runs in 10 games at an average of 55.62.

‘I guess it’s method more than anything else.

‘But learning from them, as well as the guys here, that can only be a good thing playing under pressure with expectation.’ 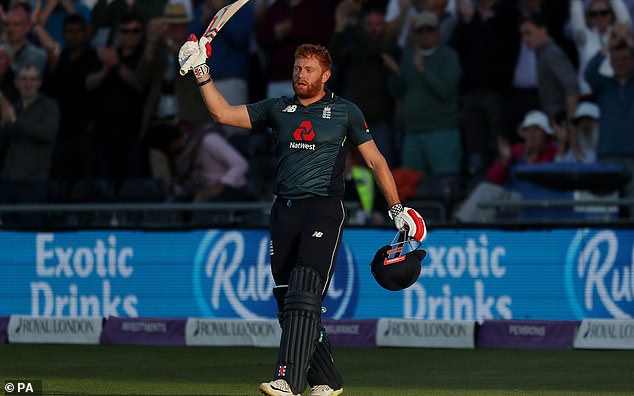 Bairstow admitted he was furious with himself getting out with England closing in on an extraordinary victory, chasing down Pakistan’s 358 for nine.

The Yorkshireman angrily hit out at his stumps after he played on to Junaid Khan and some repair work was needed before the game could continue.

‘I was cross because you want to see that through,’ Bairstow said after England had achieved their second-highest successful ODI run chase.

‘That’s where we’re at as a group of players at the moment, having competition to go and get the 150s and 160s and beyond. 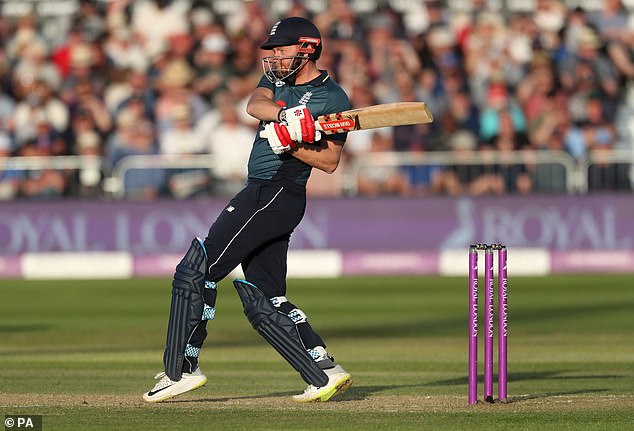 ‘We are backing ourselves and competition is healthy all the way through.

‘That’s a good place to be and I was cross about it. But it shows how much I want to do well for this side.’

The only downside for England was that captain Eoin Morgan has risked a potential one-match ban for his side’s slow over rates.

England took nearly four hours to bowl their 50 overs, less than three months after they were fined for maintaining a slow over-rate against the West Indies in Barbados.

Morgan was fined 20 per cent of his match fee from that game, his players received 10 per cent fines. 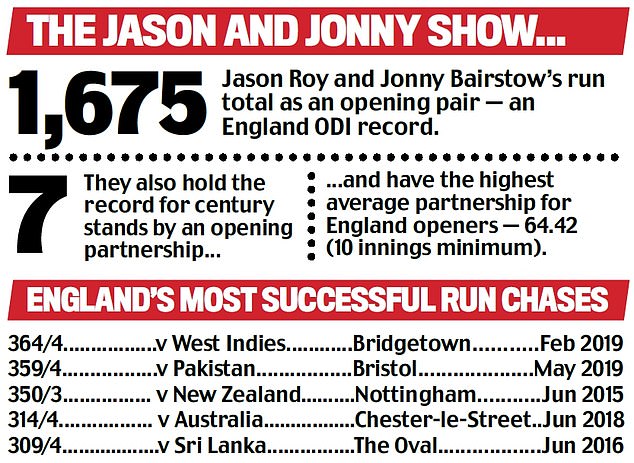 England knew that by committing another minor over-rate breach in an ODI within 12 months with Morgan as captain, that it would be deemed a second offence by the 32-year-old.

Morgan could now face a suspension, although it would not be a World Cup game with that tournament starting later this month.

Imam-ul-Haq’s 151 was the highest ODI score by a Pakistan player against England and the opener felt his side had a winning total.

‘We just lost a couple of catches that cost us and our bowlers did not stick to the plan.

‘We came here in the Champions Trophy (in 2017) so we know what these wickets are like.

‘We know England are going to come hard at us, and we have to bowl better and play better cricket to win.’