A new name emerged in England’s equation on Tuesday when Liam Dawson was given encouragement that he could yet gate-crash the World Cup party.

The eve of the first of five one-day internationals against Pakistan was the cue for England coach Trevor Bayliss to reveal an 18th player outside the 17 on duty is under consideration for the final World Cup 15 in the form of Hampshire all-rounder Dawson.

The absence of Moeen Ali at the Oval with a ‘minor’ rib injury suddenly opens the door for Joe Denly to face Pakistan more as England’s second spinner than in his main Kent role as a top order batsman.

And that makes today a very important one for a player championed by national selector Ed Smith and who, at least before he was hit for successive sixes off his first two balls in Sunday’s Twenty20 win in Cardiff, looked certain to make the final World Cup cut.

Wednesday’s game presents the kind of scenario, with a spinner ruled out for just one game, that could give Denly his best chance of making a cup appearance as the squad’s utility man.

But, if Denly struggles with the ball, it is clear England may yet turn instead to an all-rounder in Dawson who looks better suited as a spinning understudy and has made an outstanding start to the domestic season at the Ageas Bowl.

‘It’s a position in the squad I’m sure we’ll discuss,’ said Bayliss, who confirmed England considered a call-up for Dawson when it became clear Moeen would miss today’s game after being injured in the IPL. ‘And Dawson will certainly be in discussions. ‘It’s an interesting one. We have so many all-rounders we can also include someone who covers a number of positions like Denly. But Dawson has done well this year and he’s done well for us in the past.

‘I don’t think it’s out of place to say the final World Cup squad will come down to the 17 here and an 18th player in Dawson. We talked about bringing him here to the Oval and I’m sure those discussions will be ongoing throughout the series.’

The continued absence on Wednesday of another first choice starter in Jason Roy threw focus back on England’s decision to drop the man who would have stepped in for him in Alex Hales. The more games Roy misses with the back injury that England insist is also a minor one the more it looks as though they might miss the proven back up quality of Hales.

Instead James Vince will get another chance to cement his own place, with Bayliss fully supporting the decision to dump Hales and insisting England’s firm action when it became clear he had failed a second drugs test represents a warning to all in the game. 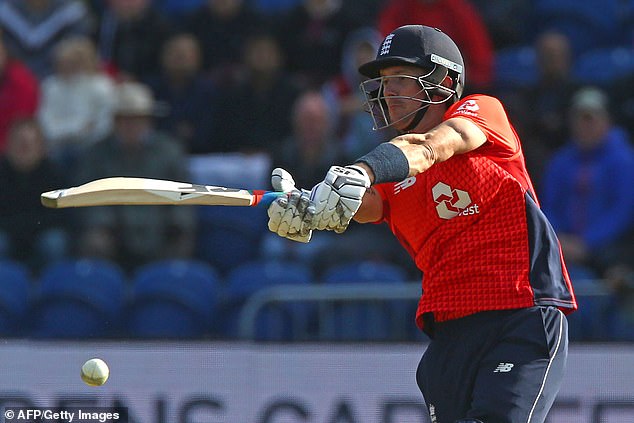 ‘It was the right way to go,’ said Bayliss. ‘I spoke to Eoin Morgan before the meeting of senior players that discussed the Hales situation and we were on the same page.

‘There were some mistakes made by this group 18 months ago but since then they’ve worked very hard on the culture and unity. Unfortunately Alex made some wrong decisions but he could certainly make a comeback. There’s no roadblock there.

‘This is not just a message to the team, it’s a message to players throughout county cricket. Those sort of decisions will not be tolerated. Those days are over. It’s started at the top and hopefully young players can learn from it.’

England intend to give everyone in their squad ‘two or three matches’ out of these five before they make their final Cup call with Bayliss acknowledging that the arrival of Jofra Archer has led to the ‘biggest decision.’

It already seems certain Archer will make the cut in place of a fast bowler and yesterday, intriguingly, the door was left slightly ajar for another latecomer in Dawson.