England could see its hottest June day on record this week

England could see the hottest June day on record this week, with a chance temperatures could hit 95F (35C).

Forecasters have predicted a spike in temperatures as warm air moving up from Europe returns to Britain. The mercury is today expected to reach up to 75F (24C) in the South and increase as the week continues.

By Wednesday or Thursday the country could see temperatures soaring towards the 96.1F (35.6C) June record, which was set in London in 1957 and then equalled in Southampton in 1976.

The Met Office is confident temperatures will reach 91F (33C) in the South by Wednesday which would be the hottest day of the year so far – but said there is also a 10 per cent chance the record will be equalled or broken. 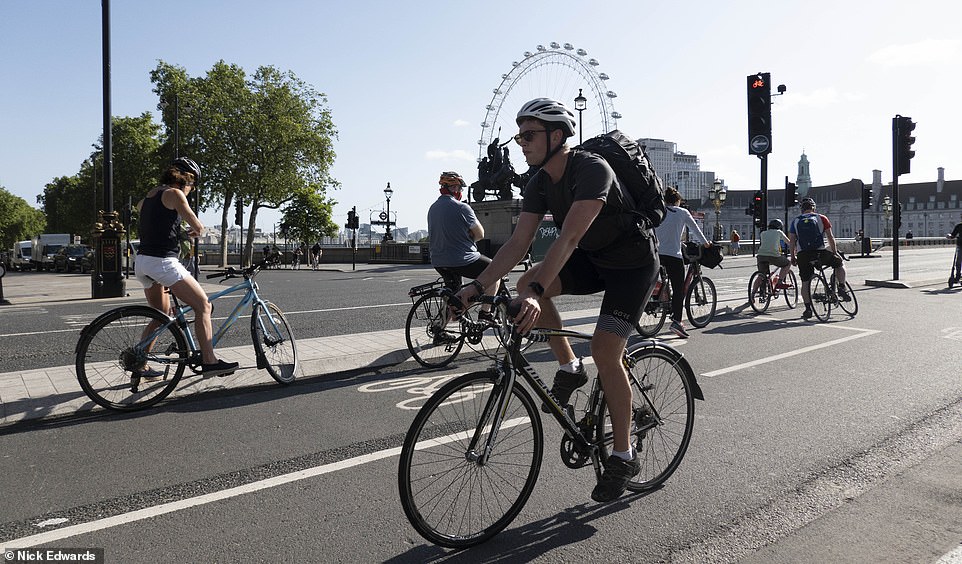 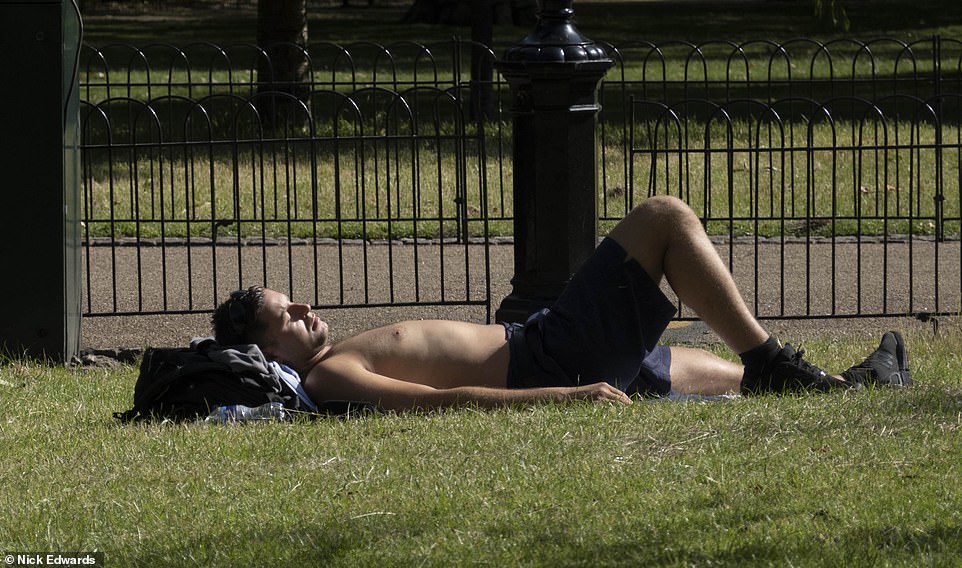 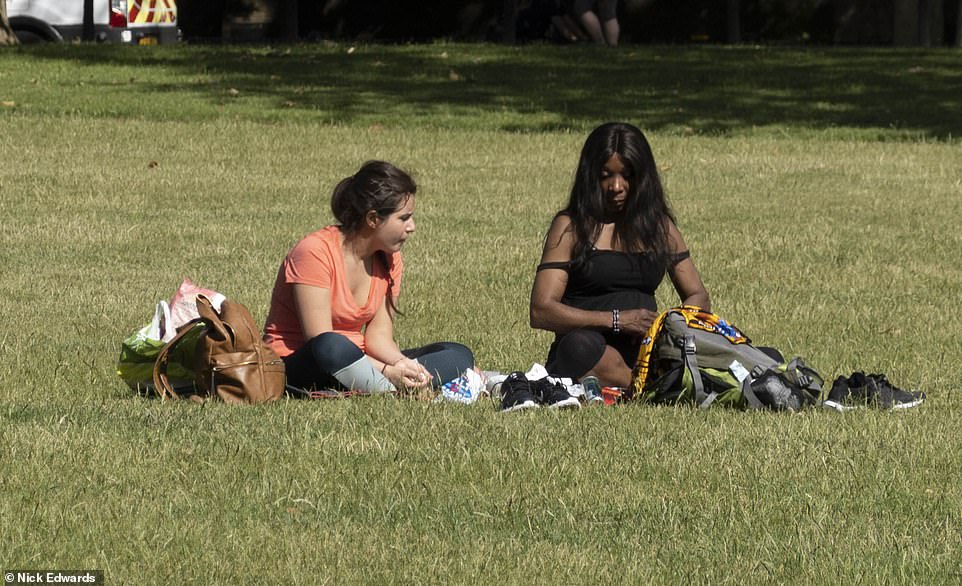 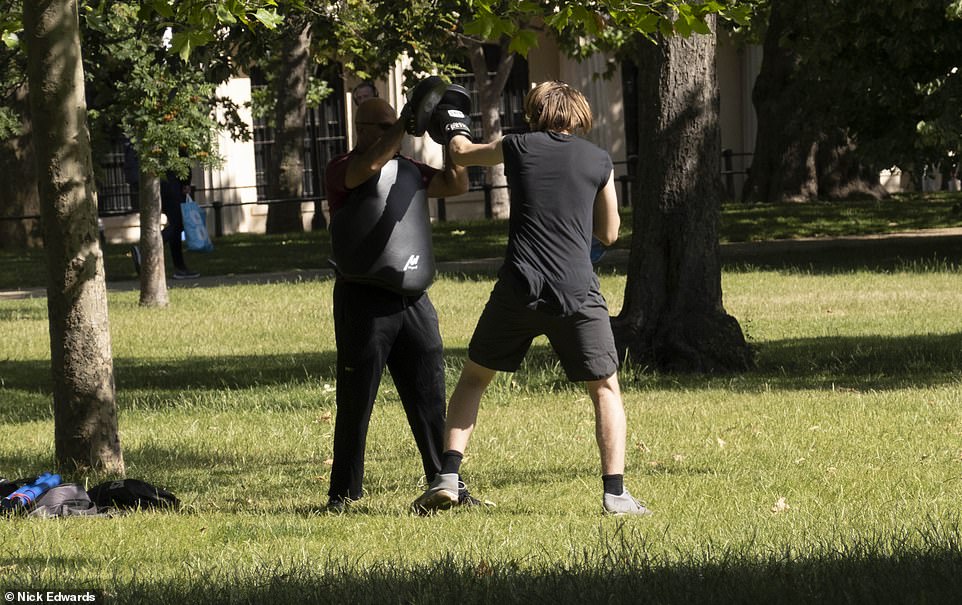 With temperatures rising and a heatwave on the horizon, two people decide to exercise in a warm St James’ Park in Westminster 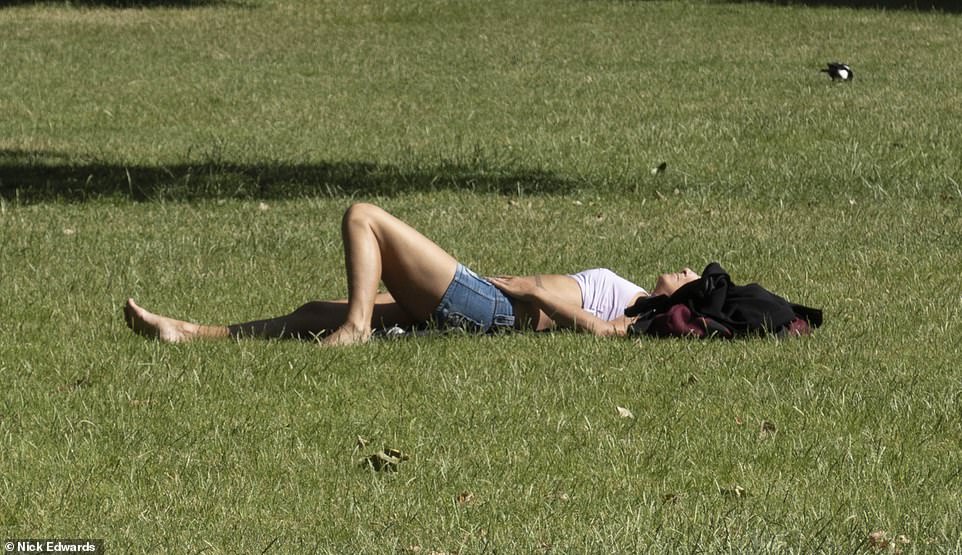 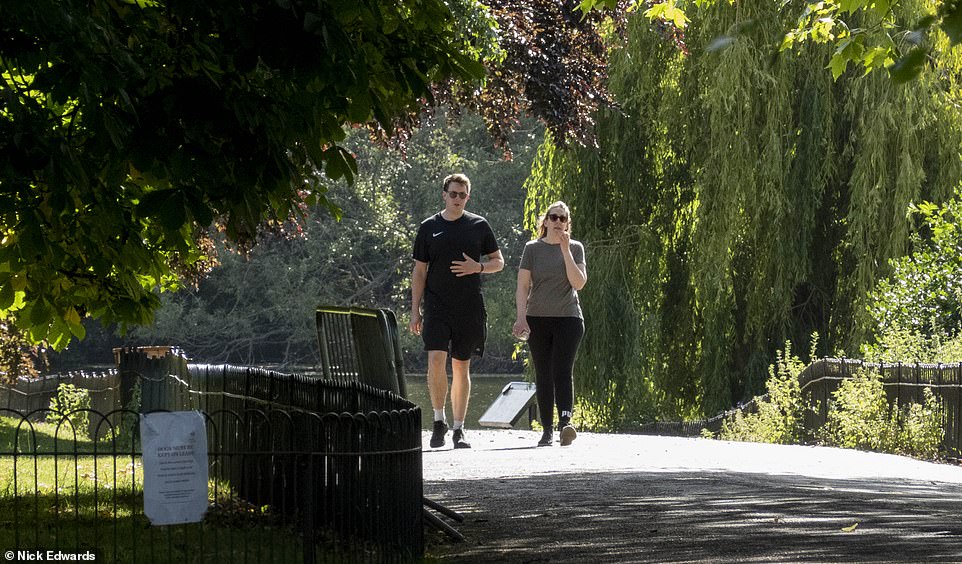 With mercury levels expected to reach up to 75F (24C) in the South and increase as the week continues, today people were pictured walking through a sunny St James’ Park in Westminster 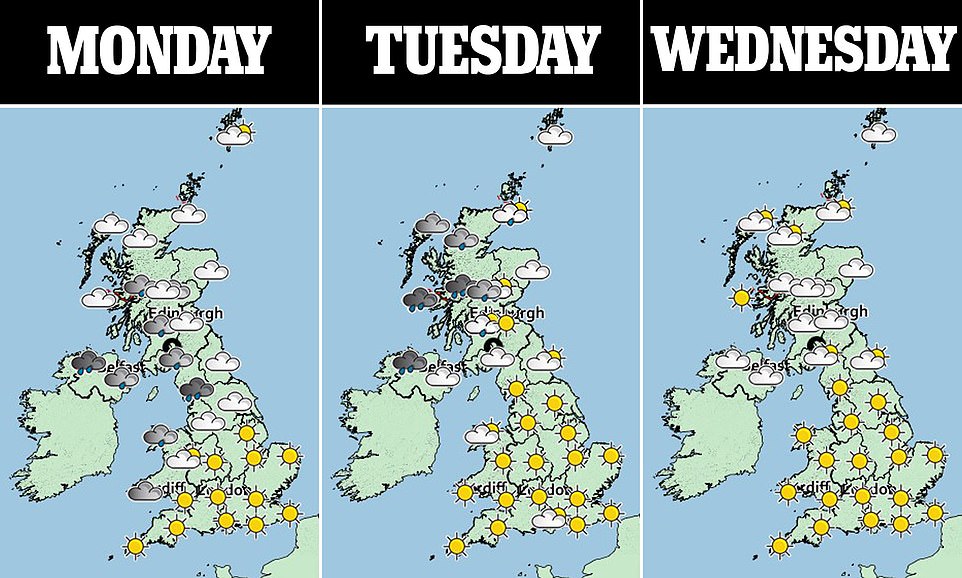 A spokesman said: ‘The heat will be really widespread. The hottest places will be the London area and western parts of the country.

‘The only places where it will be more comfortable will be eastern coastal areas which will see temperatures which are a little lower.

‘We are coming to the end of June and it is usually hotter because of the longer days and we are deeper into summer, so it’s an ideal time for hot weather.’

While warmer air usually pushes in from Europe bringing warmer temperatures, the air has been recycled and originated over the Atlantic.

After moving through Britain and looping down to Europe the weather front is due to cycle back to Britain having been heated by warmer temperatures on the continent. 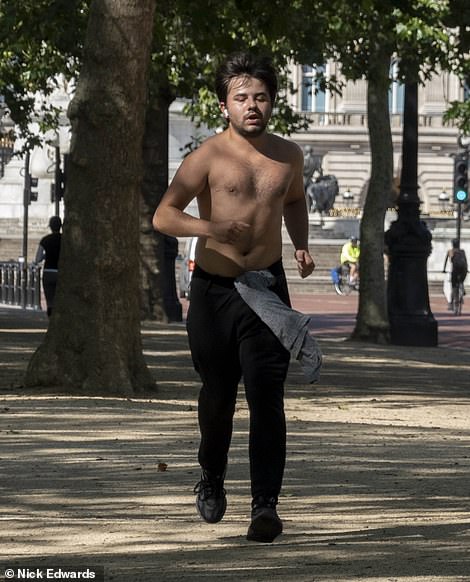 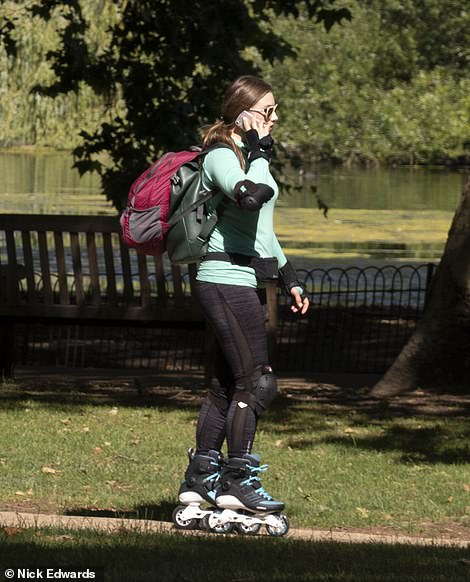 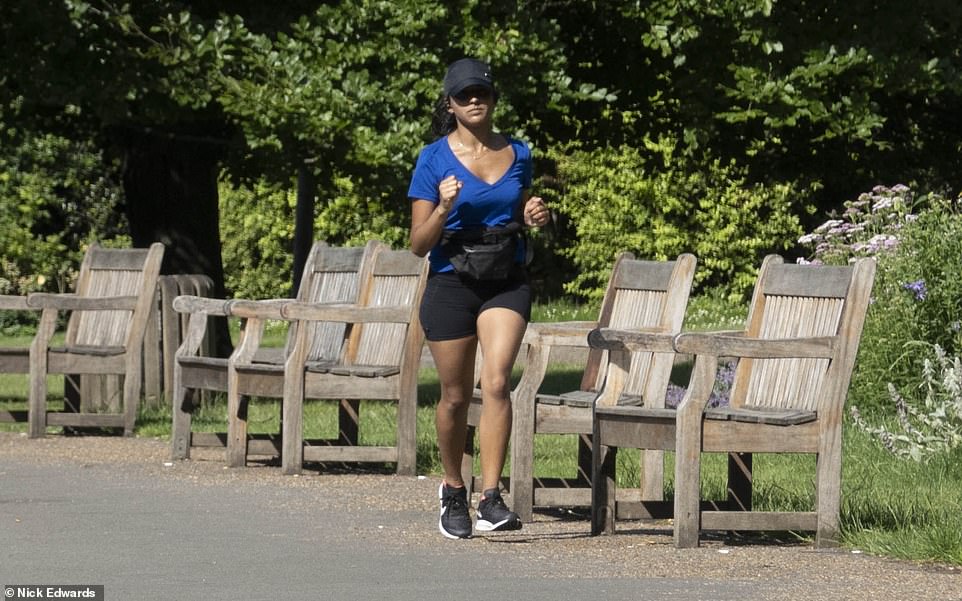 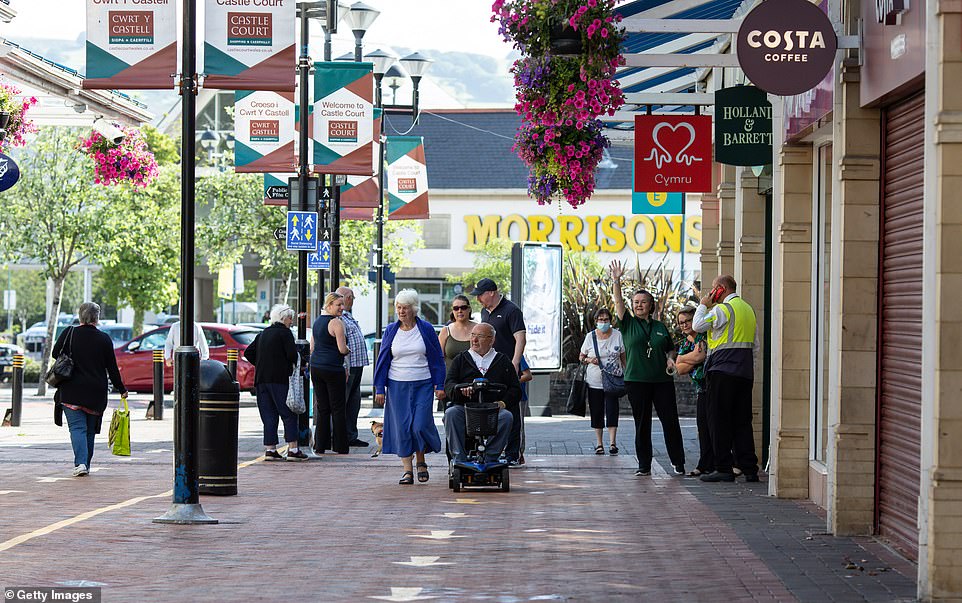 People enjoy the warm weather as they arrive to Castle Court Shopping Centre in Caerphilly, Wales, today as the country begins to ease the coronavirus lockdown 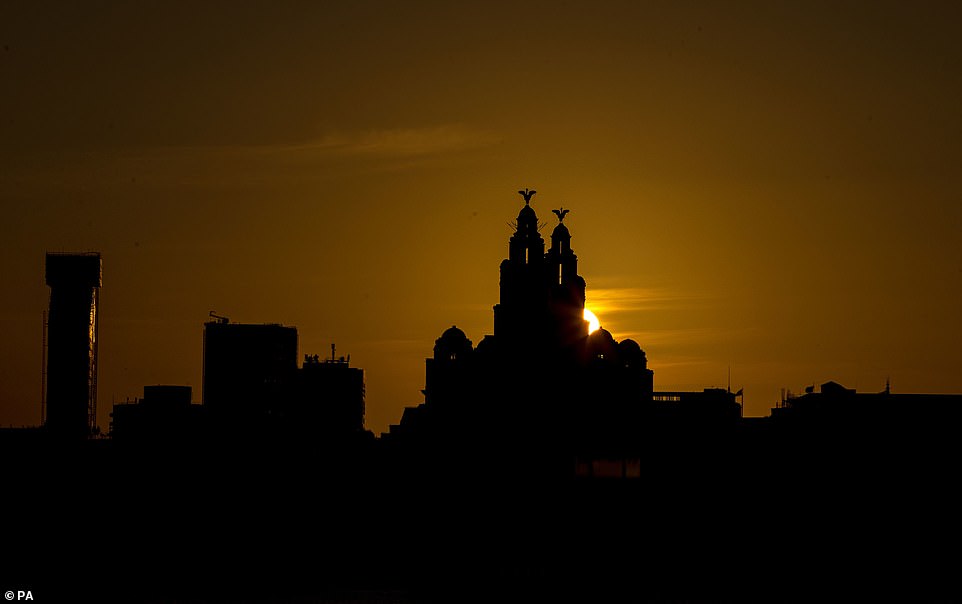 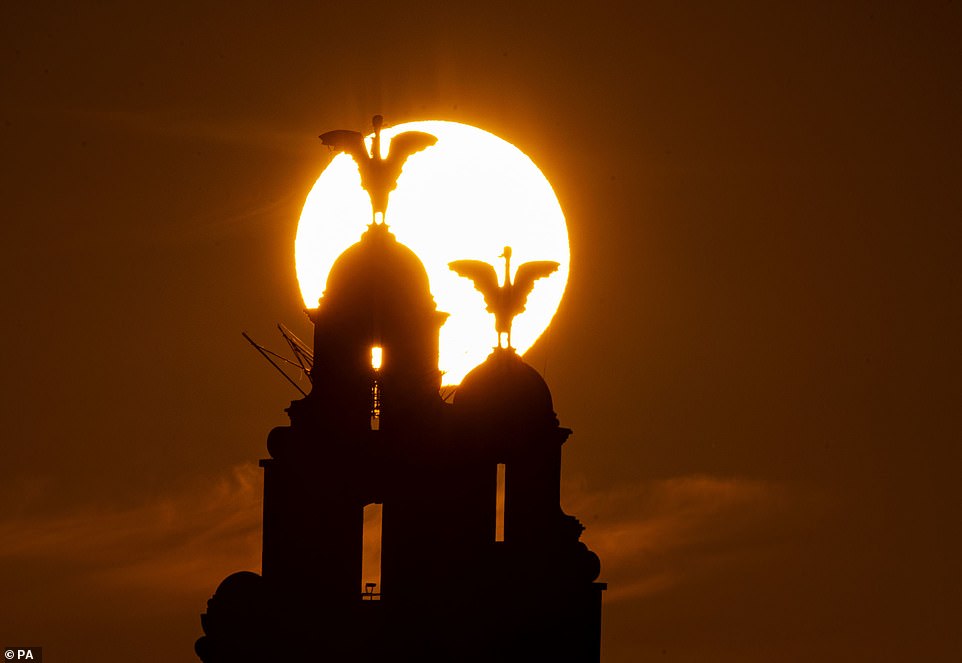 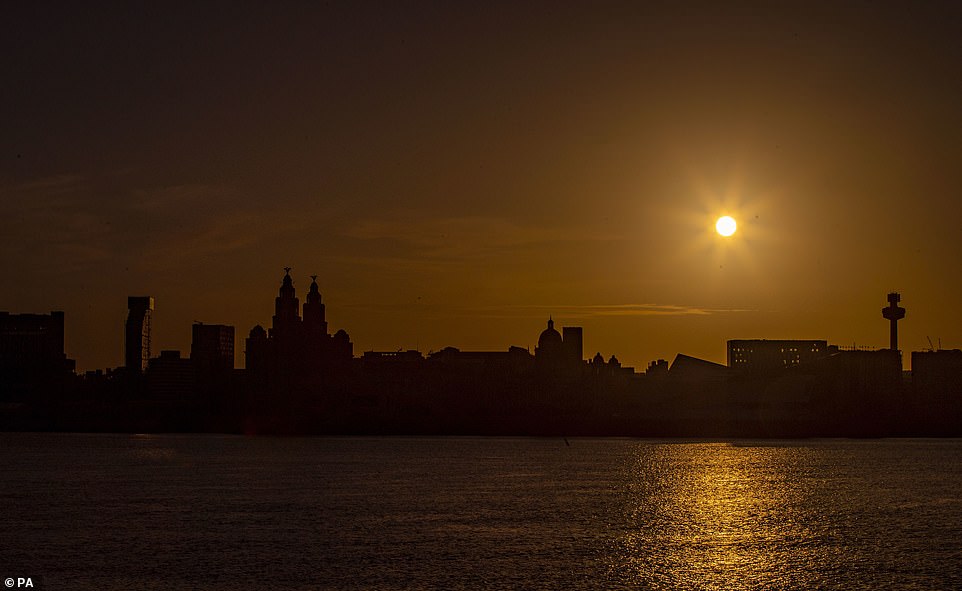 Earlier this morning, the sun rose into the sky above Liverpool’s waterfront as mercury levels continued to rise in the country 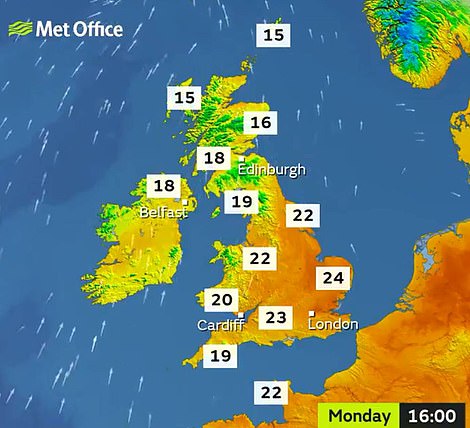 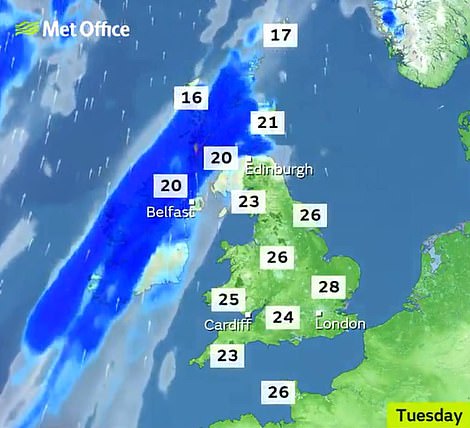 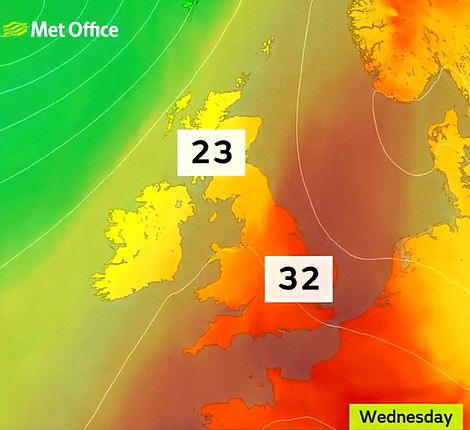 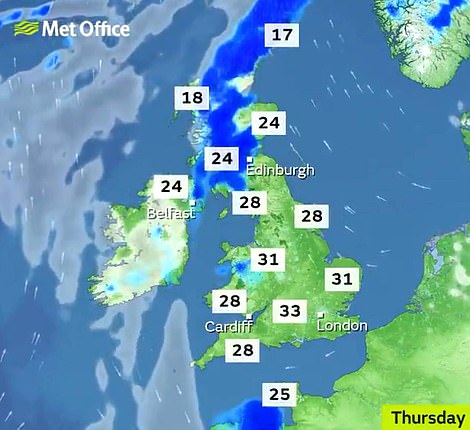 By Wednesday or Thursday the country could see temperatures soaring towards the 35.6C (96F) June record 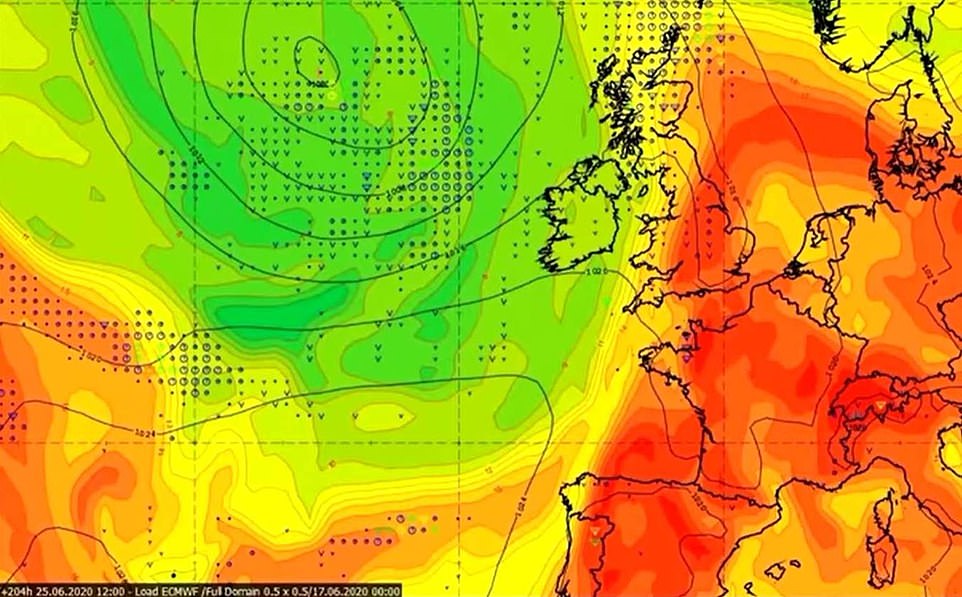 Forecasters have predicted a spike in temperatures as warm air moving up from Europe returns to Britain (above, Thursday)

The spokesman added: ‘This week, if we track the air back it is coming from the Atlantic ocean. It moves east across the UK and then it does a loop southwards.

‘After it crosses Spain the air comes back to Britain and this movement heats the air and it is even hotter by the time it gets to us.’

Although good weather is due to last until mid-week there is still the threat of rain by next weekend as the hot temperatures fall away.

There is potential for rain in the North and the West with the possibility of thunder as well. ‘It is looking pretty dry until Thursday with the warm and sunny weather,’ the spokesman continued.

‘Friday onwards there are hints that we could see a breakdown and – while still hot – maybe rain and thunder making cooler, unsettled weather into the weekend.

‘But it is not out of the question that the good weather holds on until the weekend.’