Shocking moment England fans push their way into London bar, knocking down barriers and setting off a flare – before a ball was even kicked

This is the shocking moment England fans stormed a bar, kicked down barriers and let off a flare ahead of the Three Lions’ quarter final clash with Ukraine.

In the minute long clip, the unmasked punters wave the English flag around and leap outside the bar, egging on their peers.

But once the barriers collapsed, the group rushed inside and started chanting with fellow fans who were preparing for England’s crunch clash with Ukraine this evening.

A group of England fans stormed a bar in London’s West End today, knocking down barriers and setting off a flare once inside 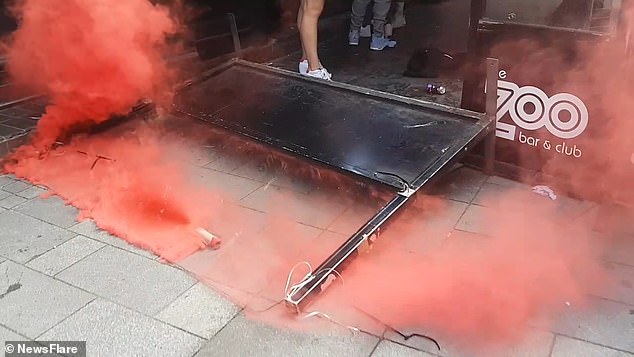 Millions of Three Lions fans took to beer gardens, pubs and bars today to support their national side against Ukraine in Rome for the UEFA Euro 2020 quarter final.

Italian Covid restrictions meant anyone arriving from the UK must quarantine within the country for at least five days, scuppering many fans’ chances to cheer on their heroes in person.

But in London today, a handful of rowdy supporters were caught on camera pushing their way into a bar, knocking down barriers and setting off a flare before a ball was even kicked.

A group of approximately 20 supporters stormed Zoo Bar & Club in Leicester Place in the capital.

The minute-long video captured the moment the fans forced their way into the establishment before a red flare was set off amid the crowds.

Punters were seen fleeing the scene as chaos ensued and security staff tried to take back control.

By the end of the clip, the bar appears to have almost entirely cleared out as the supporters moved on.

Eight hours later, England took on Ukraine in the Euro 2020 quarter-final, beating them 4-0 and booking their place in the semi-finals where they will face Denmark.

Both Metropolitan Police and Zoo Bar & Club have been contacted to provide comment.