England are hopeful that Liam Livingstone had avoided becoming another broken finger victim before the Twenty20 World Cup begins in earnest.

Livingstone, deputising for the recuperating Ben Stokes at the tournament, damaged one of his own digits dropping a catch towards the end of the six-wicket warm-up defeat to India at Dubai’s ICC academy ground.

After flooring a spiralling chance in the deep from Rishabh Pant when India required 41 from 30 balls, the Lancashire all-rounder left the field wringing his left hand. The ECB said the injury will be assessed in the next 24 hours, once the swelling in his little finger has reduced.

But speaking after disembarking the team bus at the England hotel, Moeen Ali, whose IPL form with champions Chennai extended into this match, provided an encouraging update.

‘Hopefully it’s just a bit of bruising and it’s not too bad. Obviously, it was a bit scary at the time but he said it was fine so let’s hope it’s good,’ Moeen said.

A fracture would threaten the participation in the competition of a player who highlighted his game-changing qualities last summer with an England record 42-ball hundred in a one-day international win over Pakistan.

He showed them again in this contest, waking his side from a mid-innings doze with 30 from 20 deliveries before dismissing Virat Kohli with his assortment of spin during two tidy overs as sixth bowler. 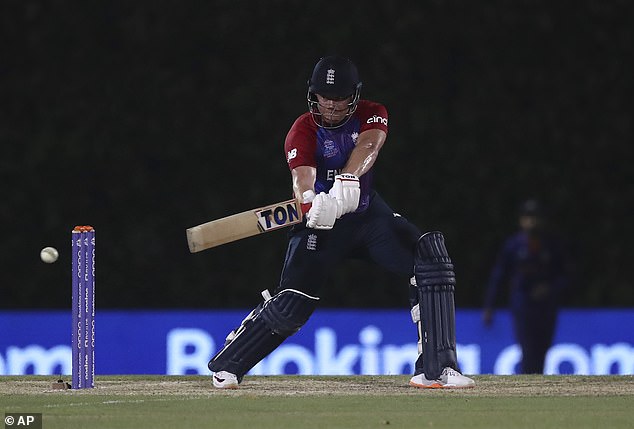 For the record, India got home with six balls unused but the result was never important. Nor was getting a look at a potential latter-stage opponent given that exactly half of England’s 32 international fixtures in 2021 have been against India.

It was about exposing players to scenarios and conditions they will face in the UAE over the next few weeks. Another stern test follows tomorrow when they take on New Zealand, ahead of Saturday’s opener versus West Indies – a repeat of the 2016 final.

An Eoin Morgan-less England looked rusty in patches. The top order failed to clear the ropes at all in the first 13 overs of their innings and the bowlers struggled for breakthroughs in defence of 188 for five, not helped by the dew that made it difficult for spinners Adil Rashid and Moeen to grip the ball.

England took some momentum into their bowling courtesy of a late-innings injection by the verstaile Moeen, whose breezy, unbeaten 43 included successive sixes off the final two deliveries from Bhuvneshwar Kumar. Moments earlier, Jonny Bairstow had departed for 49, yorked by the master death-rattler Jasprit Bumrah.

‘My role can change a bit but the great thing is I feel I can fit in with anything that’s required,’ Moeen added.

But the quality of the surface was put into context by the way in which India were propelled out of the blocks by their openers.

KL Rahul blasted a 23-ball 50, including three sixes, but departed immediately after reaching his landmark when he toe-ended an aerial blow off Mark Wood. 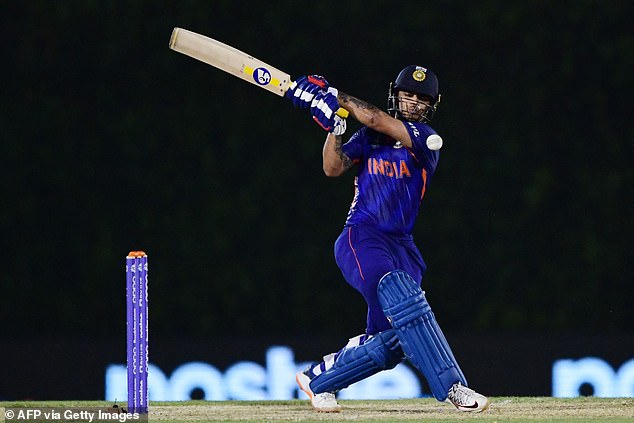 England appeared powerless to halt Rahul’s charge prior to that indiscretion but were made to regret gifting Ishan Kishan – given match practice with Rohit Sharma rested – an early life.

Only 13 runs were on the board when Chris Woakes spilled a third-over chance created by the impressive David Willey, who then saw his next delivery shovelled narrowly shy of Livingstone at deep midwicket.

Kishan made them pay when he kicked into gear after the mid-point drinks break, launching Rashid for two monstrous sixes in three deliveries, the second of which brought up his own half-century.

He retired with 65 to his name, soon after Livingstone left the field to have his injury assessed by England’s medics. And that was the primary concern for England as Pant crunched the final nail in the coffin by hauling Chris Jordan over the square leg rope.