‘It was my little one… we had to take her to hospital at 1.30 in the morning’: England opener Jason Roy reveals family drama the night before smashing 114 in win over Pakistan

After crashing 114 off 89 balls in the three-wicket win that sealed the series versus Pakistan with a match in hand, the Surrey batsman revealed that his two-month-old daughter Everly required medical attention in the early hours of Friday morning.

‘I’m not in the form of my life. It was not my most fluent of innings but it was an extremely special feeling get over three figures. I didn’t see it coming,’ the 28-year-old said.

‘I had a bit of a rough morning so this one is a special one for me and my family. It was my little one. We had to take her to hospital at 1.30 in the morning. I stayed there until 8.30 and came back for a couple of hours sleep and got to the ground just before warm-up and cracked on. It was a very emotional hundred.’

England required just 140 from 22.2 overs when Roy was strangled down the leg-side off teenage fast bowler Mohammad Hasnain – a dismissal that began a mini-collapse of four wickets for 15 runs.

However Ben Stokes signaled a return to form with 71 not out to guide a team missing suspended captain Eoin Morgan home with three balls to spare. 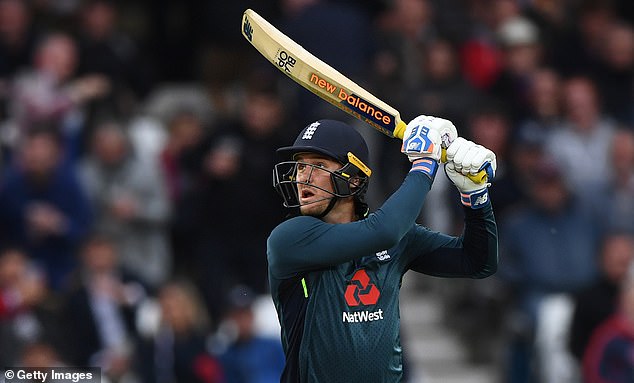 ‘I don’t think 340 particularly felt such a huge score on a wicket like that with a fast outfield and small boundaries,’ said Morgan’s stand-in Jos Buttler.

Pakistan might have been heading up the M1 for Sunday’s series finale in Leeds with a deficit of 2-1 had they appealed when Sarfaraz Ahmed removed the one remaining bail with Tom Curran, then on seven, short of his ground. Curran went on to score 31 in a vital stand of 61 with Stokes.

‘At the time, I thought both bails came out. We didn’t appeal,’ confirmed Sarfaraz, of the run-out incident in which he disturbed the stumps prior to collecting the ball. Law 29.2 states that one bail is sufficient when putting the wicket down.