England bowler Jofra Archer has alleged he was the subject of racial abuse during their first Test defeat by New Zealand on Monday.

The paceman took to Twitter immediately after the fifth day of play had concluded to make the claim, posting: ‘A bit disturbing hearing racial insults today whilst battling to help save my team , the crowd was been amazing this week except for that one guy , @TheBarmyArmy was good as usual also’.

Archer scored 30 runs off 50 balls during England’s attempts to salvage the match as they lost by an innings and 65 runs in Mount Maunganui.

The England and Wales Cricket Board said it is looking into the matter, while New Zealand Cricket has released a statement of apology.

It read: ‘New Zealand Cricket will be contacting, and apologising to English fast bowler Jofra Archer, who was racially abused by a spectator as he left the field at the conclusion of the first Test at Bay Oval, Mt Maunganui.

‘Although security providers at the venue were unable to locate the perpetrator, NZC will be examining CCTV footage and making further inquiries tomorrow in an endeavour to identify the man responsible.

‘NZC has zero tolerance towards abusive or offensive language at any of its venues and will refer any developments in the case to police.

‘It will contact Mr Archer tomorrow to apologise for the unacceptable experience, and to promise increased vigilance in the matter when the teams next meet in Hamilton.’ 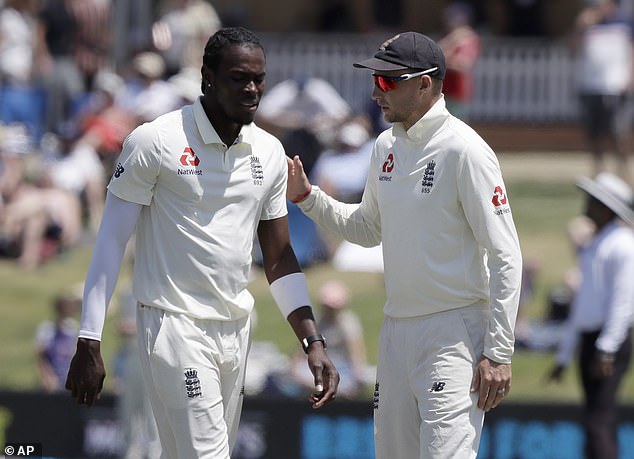 During the Ashes in September, an England fan left Old Trafford after hearing a section of supporters allegedly sing a racist song about England’s Barbados-born bowler.

The supporter wrote and sent a letter of complaint to the ECB, which also detailed sexist chants aimed at women and homophobic abuse directed at some players by the same group of people during the fourth Test against Australia.

Archer rose to prominence this summer with a series of sensational performances in the Cricket World Cup and Ashes series.

The 24-year-old played in all of England’s matches and bowled the dramatic Super Over in the final against New Zealand as they won the World Cup for the first time at Lord’s.

His superb performances then continued during the Ashes. Archer took his first five-wicket haul in Test cricket in match three and was involved in a thrilling duel with Aussie star Steve Smith throughout the series.

Archer was then handed his first central contract by the ECB after the Ashes had concluded. His first overseas Test produced bowling figures of one for 107 as he ended up bowling 42 overs in punishing conditions – 12 more than he had ever sent down in a first-class innings.