England coach Steve Cooper hailed his Under-17 world champions for playing football ‘our way’ as they completed a stunning comeback from two goals down to beat Spain 5-2.

The Young Lions were deserving winners of the World Cup for the first time and lifted the trophy after a series of free-flowing, free-scoring performances.

Cooper’s side racked up 23 goals in their seven matches out in India, with Liverpool striker Rhian Brewster collecting the Golden Boot after scoring eight of them and Manchester City playmaker Phil Foden named Player of the Tournament.

The potential of this generation of English players was never more apparent than in Saturday’s final in Kolkata as they fought back from two goals down with strikes from Brewster, Morgan Gibbs White, Foden (2) and Marc Guehi.

Cooper said: ‘We are worthy winners of the tournament, the football we’ve played and the amount of goals we’ve scored. We have individual talent, team identity, character and personality.

‘To be 2-0 down in a World Cup final, against the run of play in my opinion, and to come back tells you everything about the character of English players.

‘We beat Spain playing our game. This is how we want to play, these players are being brought up with this football and England teams will play this way.

‘If it is similar to the Spanish way, then great as they’ve been successful over the years, but this is us doing our thing, our way. And to do it on the biggest stage of these players’ careers is so rewarding. 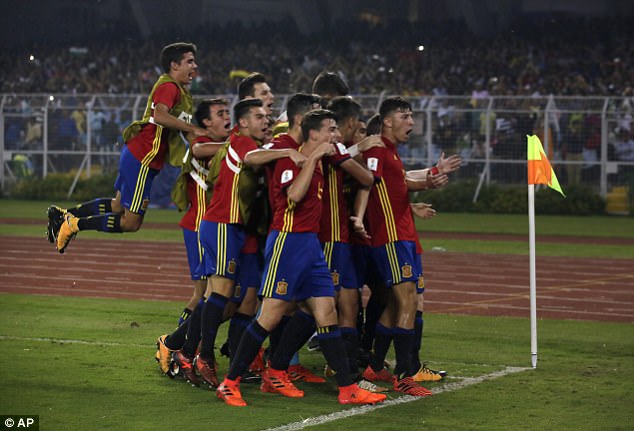 ‘This is a recognition of where English football is and where we want it to go.’

England’s triumph in Kolkata crowns a spectacular year for their youth teams. The Under-20s are also world champions, while the Under-19s won their European Championship.

Cooper’s Under-17s were seconds away from also winning their European Championship back in May only for Spain to score an equaliser in the sixth minute of stoppage time and then win on penalties.

And when two goals from Barcelona forward Sergio Gomez put Spain in control here, it looked for a while as though England would crumble.

But Brewster pulled one back late in the first-half and made Cooper’s team talk a little easier.

He said: ‘It came at the perfect time, it was a fantastic cross and header. Rhian has showed he can score all sorts of goals. It gave us a bit of a boost. 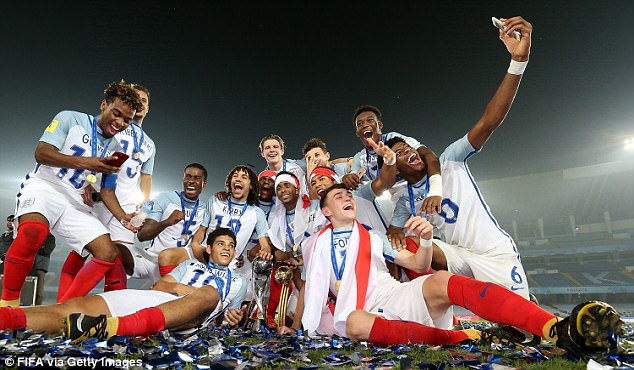 ‘I don’t think the half-time team talk would have been much different but we just managed to keep the belief high. We were back out early raring to go and we won 5-2.’

Gibbs White equalised before the hour mark and Foden put England ahead for the first time. Late goals from Guehi and Foden alleviated a nervy finale and ensured an emphatic final scoreline.

Cooper added: ‘This is a little bit surreal. It might even feel a little bit better tomorrow when we actually realise what we have done. The players were fantastic all the way through the tournament.

‘This is the development team, we’re building for the future. Nobody is going to get carried away.

‘Expectations will obviously rise now but we have a long-term plan, we’ll stick to the plan.

‘Through thick and thin we have a long term vision and goals of winning World Cups and Euros at senior level and we’ve had a good start here.’