Tommy Robinson has fled the country and said he wants to move abroad because he does not feel safe in the UK.

The English Defence League founder, 37, said he left Britain with his family ‘straight away’ after an arson attack on his wife Jenna Vowles’s house.

Robinson, real name Stephen Yaxley-Lennon, did not reveal where they were but hinted at Spain due to his reference to the recently imposed 14-day quarantine rule.

He said in a video circulating on social media they left the UK after their home came under attack a few weeks ago following the Black Lives Matter protests.

The English Defence League founder (pictured), 37, said he left Britain with his family ‘straight away’ after an arson attack on his wife Jenna Vowles’s house

What Tommy Robinson says in his video in full:

I was due to be coming back for a demonstration on Saturday. There’s something I haven’t told everyone, I had an incident quite a few weeks ago with an arson.

And I’m looking at relocating my family which is pretty hard to do and especially during Covid – I couldn’t even get a hotel… trying to get a hotel, couldn’t even find a hotel to move them out to.

So obviously my wife has had enough of everything. Someone gave her somewhere to stay, so we left the country.

And I was due to be flying back for a demonstration, obviously now with this 14-day quarantine, if I fly back, I probably won’t get back out.

My kids are out here, I’m still in the process of finding a permanent relocation for them. I’ve got new schools for my daughters, but that’s just an update.

So I’m playing paddle – it’s a mixture between tennis and squash. But I’m sorry, I’m just letting people know because people were saying ”what, he’s still away”… because of my family are away, because I need my family away because they’re not safe basically.

And it wasn’t Muslims that did this, it was after all the BLM stuff. I think I know who it was, so that’s just an update, I will… I tried to go live, the reception here is ***.

‘I’ll go live tomorrow night or something. But that’s just letting you all know I won’t be there… the demonstration is still on, I’ll be doing a speech, it’s still on in London for Hearts of Oak.

Just an update from me to say unfortunately I’ve got my flights booked but because they changed the regulations on Covid I won’t be able to come back.

And I would come back but my kids and family are out here, I literally drove out here with them. Peace.

He continued: ‘It was targeted against my wife’s property.

‘At that point we left the country straight away and I’m looking at relocating my family, which is pretty hard to do, especially with Covid — I couldn’t even get a hotel.’

The far-right activist, who was sweating in the clip after playing padel, told how they drove to their current bolthole and had not planned to return to the UK for a demonstration the following weekend.

He said: ‘Obviously my wife has had enough of everything — someone gave her somewhere to stay, so we left the country.

‘I was due to be flying back for the demonstration, but now with this 14-day quarantine, I probably won’t get back out and my kids are out here.’

Robinson said they had got places at local schools for his three children but was still ‘in the process’ of finding a permanent place for them to live.

He added: ‘I need my family to be away because they are not safe basically.’

The arson attack on Ms Vowles’s house came about due to Robinson’s opposition to the Black Lives Matter protests that erupted across London last month, he claimed.

He had called for counter protests to break out to defend statues and slammed police officers for being too soft-handed on the activists.

Robinson had been due to speak at a Hearts of Oak – an alliance of activists including former Ukip member Carl Benjamin – rally in Parliament Square, London, this Saturday.

It comes just days after a YouTuber appeared in court after he ‘threatened to cut off Robinson’s head’ in a series of home-made videos.

Muhammad Abdul Basir, 24, from Mitcham, south London, last year talked on his YouTube about ‘beating up and assaulting’ Robinson.

Basir, who appeared to have filmed the videos in his bedroom, also mentioned Prince William in his films but there are no charges regarding those.

He spoke to confirm his name, age and address, and to enter his pleas to the two charges.

A court heard how Basir, who lives with his parents, talked about ‘beating up and assaulting Robinson’ before going on to describe how he would would ‘cut his neck off’ in one video titled ‘Tommy Robinson Abdul Basir 5’.

Prosecutor Trevor Green told the court: ‘On September eighteen, last year police became aware of an anonymous referral regarding a series of videos posted on YouTube by the defendant.’

He continued: ‘The defendant is seen filming himself in what appears to be his bedroom.

‘He talks about beating up and assaulting Mr. Robinson, describing him as a street kid who hurts people, while telling Mr Robinson he will cut his neck off and all his EDL fans.’ 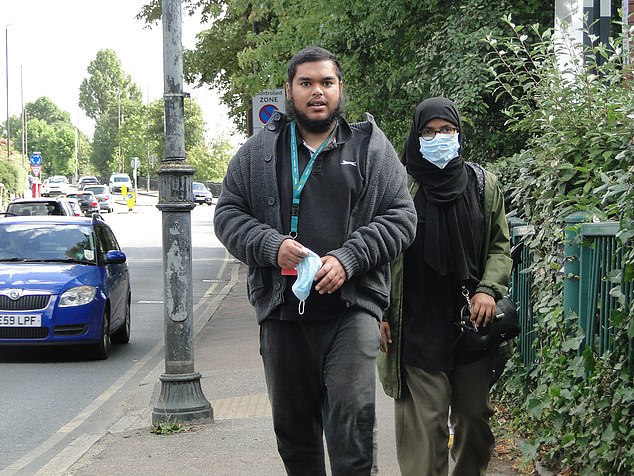 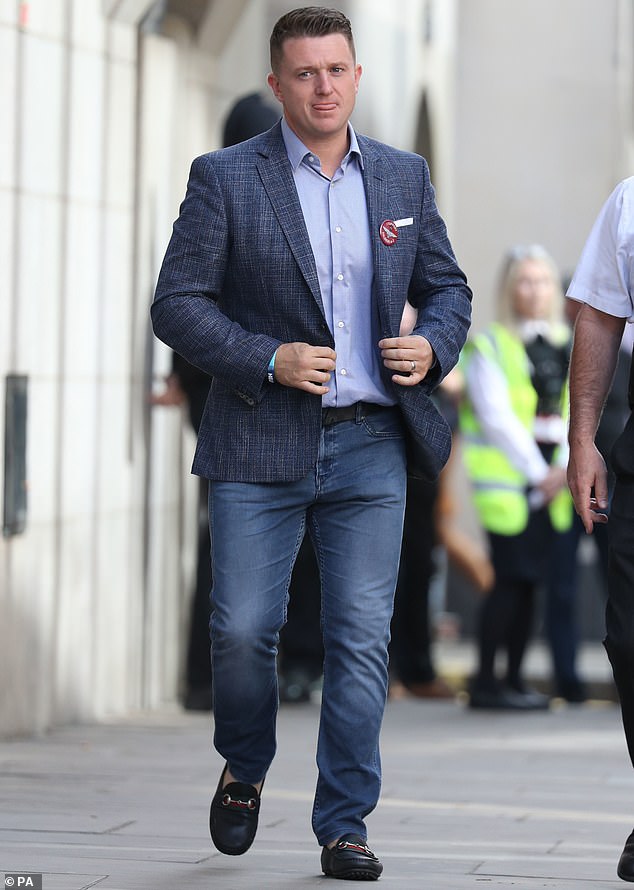 The court heard there were further video posts of a similar nature regarding Robinson.

The defendant’s lawyer told the court there was a police bail condition regarding video postings naming Prince William, but there are no charges regarding those.

Basir is charged with stalking Robinson between September 13 and 18 last year, causing serious alarm or distress by posting the YouTube videos on September 14 and 16 last year and threatening unlawful violence.

He is also charged with racially-aggravated harassment of Robinson between the same dates by causing fear violence would be used against him.

Basir was bailed to appear before Kingston-upon-Thames Crown Court on August 13 on the condition he resides at his home address, does not contact Robinson.

From apprentice aircraft engineer to controversial right-wing figure, who is Tommy Robinson?

Tommy Robinson describes himself as a ‘journalist, activist and public figure fighting for the forgotten people of the UK’. He was an apprentice aircraft engineer at Luton Airport until he mistakenly got into a drunken fight with a man who turned out to be an off-duty police officer and was jailed for a year.

The 37-year-old founded the English Defence League in 2009, taking the name of a renowned football hooligan from his home town of Luton.

He quit the EDL in 2013 as he admitted the group was suffering from ‘dangers of far-right extremism’.

He pledged to work with Maajid Nawaz, co-founder of the Quilliam Foundation, to help reform Islam and fight extremism by working with Muslims in the UK.

But after their relationship deteriorated, he founded Pegida UK in 2015.

It is named after the German group Pegida, which stands for Patriotic Europeans Against the Islamisation of the Occident.

That same year he published his autobiography Enemy of the State.

He is also the joint author of Mohammed’s Koran: Why Muslims Kill for Islam, which was published in 2017.

From 2017 to 2018, he worked for The Rebel Media, a Canadian right-wing news website founded by Ezra Levant.

On May 25 last year, Robinson live-streamed outside the Leeds trial and his contempt of court case ensued.