They are some of the most popular brand names in the world, but are you pronouncing them properly?

While vast swathes of the population would love to have a wardrobe crammed with Adidas, Hermès and Moschino, it turns out just as many people are mispronouncing the names of the brands we so covet.

Now YouTuber Lucy Earl, who vlogs under the name English With Lucy, has created a video to teach viewers how to pronounce popular brands properly – with some surprising results.

In a clip that has already been watched thousands of times, Lucy, from Bedfordshire, teaches her subscribers how to say various household brand names perfectly – including French labels Britons can typically stumble over.

Lucy said: ‘I am by no means a fashion expert. I am, however, extremely interested in pronunciation and I know a lot of you guys are as well and you want to sound like you know what you’re talking about.

‘A lot of you will be here because you want to improve your English speaking and pronunciation and will want to sound more professional when talking about these brands.’

Instead of Mosh-sheen-oh, the Italian label Moschino is actually pronounced with a hard ‘ch’: ‘Moss-KI-no’.

HOW MANY ARE YOU PRONOUNCING PERFECTLY?

Hermès, a French designer, is meant to be pronounced ‘AIR-mez’, not the common mispronunciation of ‘Hermz’.

Popular sports brands seem to have different pronunciations everywhere, with Adidas and Nike being sometimes being pronounced ‘A-dee-das’ and Nike as in Pike.

But they’re actually meant to be said like ‘Nike-ee’ and ‘Adi-dass’, named after its founder Adi Dassler.

The more high-end designers are often pronounced incorrectly, with many people saying ‘Bale-Main’ instead of ‘Bul-muh’ when uttering the name of the French label Balmain.

Similarly, many people pronounced Versace as ‘Ver- sar-chee’ when the Italian brand is meant to be said like ‘Ver-SAH-cheh’.

English With Lucy now has more than 350,000 subscribers from all over world, who ask her questions about life in Britain, how to pronounce words and popular sayings and phrases.

Lucy admitted that she had got some of the pronunciations wrong herself, particularly the French and Italian brands

Ms Earl, 22, set up the business with a £500 loan from her father. She bought a tripod and camera, taught herself how to shoot and about lighting and now earns more than the average teacher through advertising

She previously said: ‘It’s a business that I started completely from scratch with a £500 business loan from my dad, paid back with interest, of course, and has now a pretty significant turnover.

‘It was a huge step for me to say no to the grad schemes and yes to going at it alone, but it was the best thing I ever did.

‘Every day I get to work with everything I’m passionate about with total creative control, marketing, social media and the English language.’ 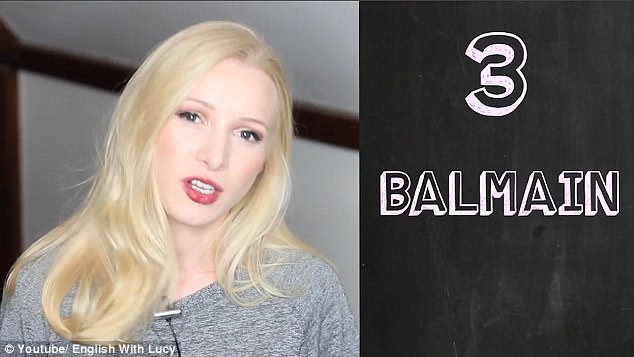 English With Lucy now has more than 350,000 subscribers from all over world 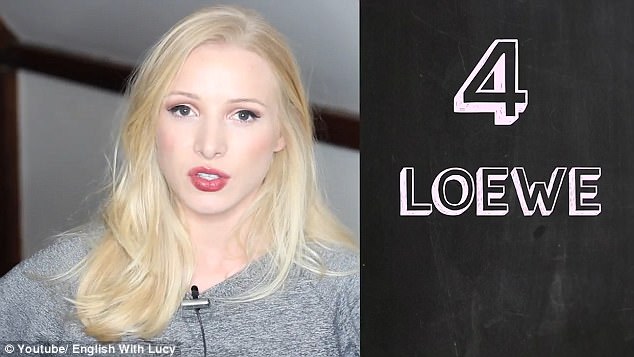