`Enormous´ sales predicted for iPhone X – despite the £1,000 price tag

Apple’s new iPhone X is the “future of smartphone design” and will still be a success despite its near £1,000 price tag, one analyst believes.

The technology giant used a live event on Tuesday to unveil the special edition iPhone to mark its 10th anniversary, complete with an edge-to-edge screen and facial recognition technology.

The phone’s starting price of £999 – which can rise to £1,149 for the highest specification version – sparked some outcry on social media.

The device goes on sale on November 3, some two months after the iPhone 8 and 8 Plus, which begin shipping on September 22.

Technology expert Ian Fogg, from IHS Markit, said the price jump had been overstated for what the iPhone X offers in terms of an upgrade.

“Apple is hoping the later availability date for iPhone X will not affect iPhone 8 sales this quarter,” he said.

“Apple’s lower iPhone 8 pricing should limit the impact, but it remains a risk. iPhone X is the future of smartphone design, but it’s also available in the future too.

“iPhone X is a premium-priced smartphone which for the first time goes over the 1,000 dollars threshold for the top 256GB model.

“It will still sell in enormous volumes because Apple has repeatedly demonstrated its ability to persuade consumers to shift their overall spending to place a greater share of their disposable income towards a smartphone purchase.

“And the starting price of 999 dollars is only 33 dollars more than the previously most expensive iPhone, the 7 Plus 256GB.”

How the iPhone has changed in size over the years

The iPhone X will be the first Apple smartphone to feature facial recognition technology – enabling users to unlock the device with their face.

It replaces the fingerprint-scanning Touch ID, built into the home button, which has vanished from the iPhone X to make way for the larger screen.

The facial-scanning software can also be used to animate emojis and send them as messages, a feature Apple is calling Animoji. 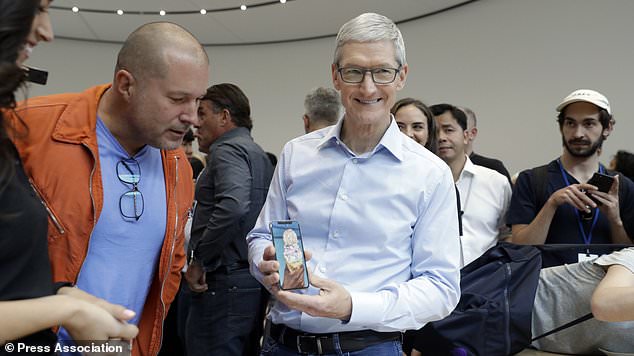 The iPhone X was the showpiece announcement at Apple’s first event to take place on its new Apple Park campus – inside the new Steve Jobs Theatre.

Chief executive Tim Cook paid tribute to the late co-founder at the beginning of his keynote, calling the venue a tribute to “Jobs and his vision”.

A third-generation Apple Watch, which contains its own mobile signal and can be used to make phone calls independent of a smartphone, was also announced alongside the Apple TV 4K.