‘I should break your nose right now’: Enraged man explodes at 14-year-old motorbike rider for being ‘too loud’ near his house – but his tone changes when the boy’s dad arrives

An enraged man has blown-up at a 14-year-old dirt bike rider in an expletive-laden rant because the boy was making too much noise passing by his house.

Footage posted on TikTok shows the man in a hi-vis shirt storming out of his gate to confront the teenager and his younger brother for riding on a dirt track that backs onto his property.

‘You need to f***ing stop riding around here, alright,’ the man says.

The boy tells the man to ‘back up and calm down’, but he becomes more aggressive and lunges towards him.

‘Don’t grab me!’ the teenager says.

‘Is this thing registered?’ the man yells while pointing at his bike, before beckoning to a man believed to be his dad, who is still tearing through the bushland further ahead.

The man asks the boy where he lives, before accusing him of providing a fake address on a previous occasion when he spotted him riding in the area.

When the teenager says, ‘of course I did, I’m not telling you my address’, the man threatens to hurt him.

As the boys’ father pulls up at the scene, the man quickly redirects his outburst.

The dad remains calm, trying to deescalate the tension as the man screams in his face, saying he is sick of seeing riders in the area.

‘You don’t need to swear at me mate,’ the dad says calmly. ‘It’s my first time I have been here’.

‘I’m an easy going bloke. If he [the teenager] is causing trouble, all you need to do is let me know,’ the father continues.

‘I just came down for a ride and I brought them with me. If it’s been an issue before that is fine. We won’t come down here again.’

The homeowner’s tone quickly changes after the father’s calm response to his threats and he backs down before quietly asking the group to leave. 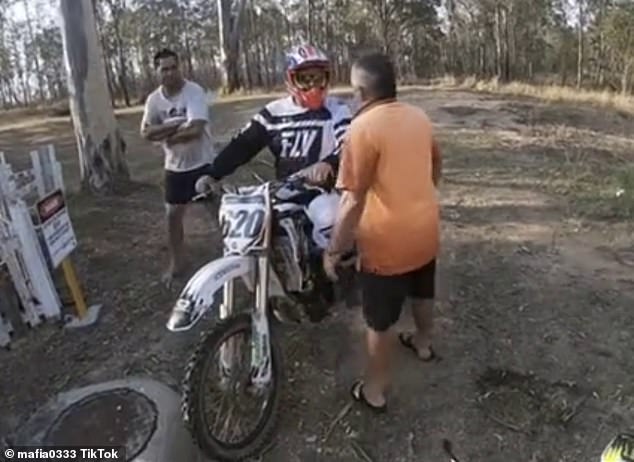 The man redirects his outburst at the boy’s father (pictured), who is able to deescalate the situation by remaining calm

The clip went viral on social media but Australians were divided over who was in the wrong.

‘I understand if he doesn’t like bikes, but there is no need to act like that to a kid. That’s wrong. [The] poor kid is just having fun,’ one woman said.

‘I’d ride there more and earlier in the morning,’ another person chimed.

‘Wow. He needs to give respect to the guys on the bikes,’ a third viewer added.

But others felt his request was reasonable.

‘I’m on his side. A**holes on loud two stroke bikes going around and around would drive me insane. My home is where I’m supposed to be able to relax,’ someone else said.

‘Why can’t you just find somewhere else to ride? It’s obviously upsetting somebody,’ one person asked.

‘Nah, it’s understandable about his dog [but] all he had to say was turn it off when you are nearby and walk it through [the area] not go off like that,’ a third comment read.