Peter de Savary (pictured), who once owned Skibo Castle, where Madonna married Guy Ritchie, has talked for the first time about his experience of doing business with the future U.S. president

Entrepreneur Peter de Savary has no time for Donald Trump after they fell out over the purchase of the Mar-a-Lago resort in Florida.

Now, the 73-year-old, who once owned Skibo Castle, where Madonna married Guy Ritchie, has talked for the first time about his experience of doing business with the future U.S. president.

Having lost out to Trump in trying to buy Mar-a-Lago in 1985, De Savary claims he was invited to lunch with him, during which a prospective partnership was discussed.

De Savary was accompanied by his third wife, Lana, while Trump’s first wife, Ivana, was absent. They divorced in 1992 after his affair with actress Marla Maples.

‘I had the whole thing worked out, everything that I would do to the club: beautifully done, very tasteful, classy,’ de Savary tells me.

‘Halfway through the lunch he [Trump] says: “Excuse me, I’ve got a very important conference call to make,” and he disappears.

‘Then, a minute later, Lana, my wife, says: “I need to go to the loo.” She comes back very rapidly, ashen-faced. I say: “What’s the matter?”

She said: “I took the second on the left as you said, and the girl who was serving us lunch had her skirt up and Trump was having sex with her in the corridor.” 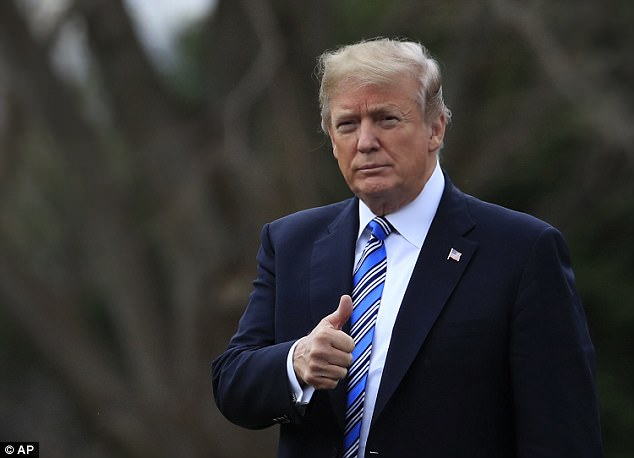 Having lost out to Trump (pictured) in trying to buy Mar-a-Lago in 1985, De Savary claims he was invited to lunch with him, during which a prospective partnership was discussed

After a couple of months, De Savary called Trump. ‘He said: “Peter, I loved everything you said, absolutely fantastic — I’m doing it all myself.”

‘So, that’s the man you have as a president. Takes “conference calls” and doesn’t respect a handshake.’

The White House has yet to respond to requests for comment. 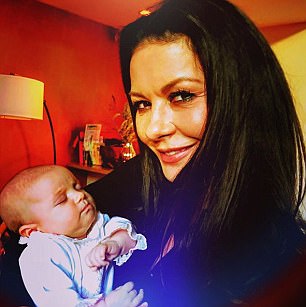 In this picture posted to social media, Catherine Zeta-Jones holds the newborn daughter of her stepson, Cameron Douglas

She may no longer be a ‘darling bud’, but 48-year-old Welsh actress Catherine Zeta-Jones looks delighted in her latest family role as a grandmother.

In this picture posted to social media, she holds the newborn daughter of her stepson, Cameron Douglas.

Cameron, son of her Oscar-winning husband Michael, 73, captions the photo: ‘ZeeZee and Lua. Watch out for this duo.’

Cameron’s daughter Lua Izzy, by his girlfriend Viviane Thibes, was born in December. ‘Catherine says she wants to be called ZeeZee and Dad wants to be “Baba” for some reason,’ he revealed.

‘One was his insistence that we did not refer to him as “Sir Ian”. I wonder why so many eminent people accept a knighthood, but don’t like people actually using it. The other was the size of his nose.’ Ouch.

Which partner of an eminent designer, who regularly criticises the rise of disposable fashion, shops in Primark?

‘They are really friendly — I never thought I would like [Donna], but my mum is a massive fan,’ says Cetinay.

‘I met James the other day before the show started. He’s lovely — we sometimes speak on [video-calling app] FaceTime.

Let’s hope Kem can give James some invaluable romantic tips…