EPA finds that some US drinking water contains URANIUM

Data from the Environmental Protection Agency (EPA) shows that drinking water in some parts of America may contain unsafe levels of uranium.

Researchers from Columbia University analyzed nationwide data, and compared it to safety standards laid out by the EPA.

They found that many localities in the south and Midwest in particular had unsafe levels of uranium detected in water.

While small amounts of many chemicals are acceptable in water, according to safety standards, consistent exposure to it in drinking water can cause a long list of deadly and debilitating diseases.

Contaminated water has become a rising issue in America off of the back of the flint water crisis, an increased attention has been paid to contamination of lead and other metals in U.S. drinking water – which is more common than many may believe.

Researchers found elevated uranium levels in two-thirds of community water systems they gathered data from, with those in the South, Midwest and Western regions most affected

Researchers, who published their findings at the start of the month in The Lancet Planetary Healthy, gathered data from 2000-2011 for the study, reviewing recorded metal levels from nearly 38,000 sites.

They found elevated levels of uranium across the country, with researchers nothing that semi-urban and Hispanic communities were most at risk of being exposed to the contaminated water.

In total, nearly two-thirds of sites tested had some sort of uranium contamination.

Counties across the Midwest, West coast and southern regions of the country were most affected.

Some counties across Kansas and Nebraska in particular were displaying the highest levels of uranium.

Many Americans may not think that uranium poisoning is a thing to worry about in their day-to-day life, and may not even be aware that it can be found in their drinking water.

‘Uranium is an under-recognized contaminant in [community water systems],’ the researchers wrote in the study.

The research presents grave implications for the health of Americans, as the problem is wide reaching and can have disastrous health effects in the future. 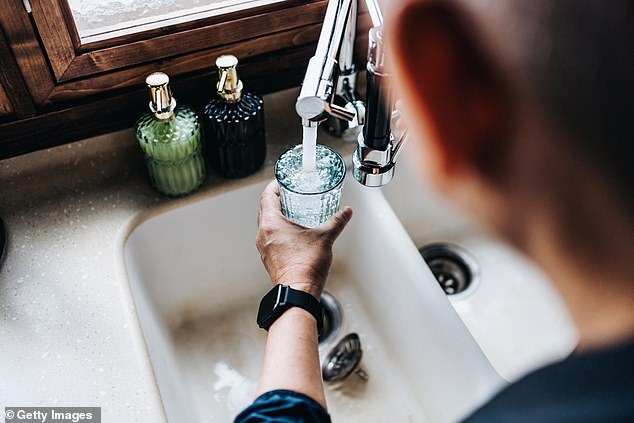 The release points out that 90 percent of Americans rely of a public drinking water system of some kinds, making contaminated water at this scale an issue that touches nearly every American.

Researchers are calling for further investment and regulation to prevent suffering from uranium exposure.

‘Such interventions and policies should specifically protect the most highly exposed communities to advance environmental justice and protect public health.’

Elevated levels of arsenic, barium, chromium, selenium were found in community drinking water as well, though not to the same extent as uranium.