Eugenie (right) and Beatrice at the Queen’s funeral

As part of the deal to allow TV access to the Queen’s funeral, Buckingham Palace insisted that specific personal scenes never be broadcast again.

The banned footage includes Edward and Sophie discreetly weeping in Westminster Abbey, Eugenie and Zara wiping their eyes, George wiping and scratching his nose, a courtier removing the bolts from the Imperial Crown atop HM’s coffin, and the casket being lowered into the crypt.

Now Paris’s hippest and most-watched political chat show Quotidien has gleefully seized the list, replaying every ‘forbidden’ moment to its millions of viewers in France, Belgium and Switzerland. Francais perfide!

The Queen’s pallbearers are set to receive superior gongs to the anticipated MBEs. A source says the bearers, as well as those who bore her coffin in other places on its journey south from Balmoral, will be honoured in a Demise Honours List being prepared by the King’s team. This will include the Royal Victorian Order and Royal Victorian Medals. Recipients will include staff in the late monarch’s household and those involved in the funeral. Demise Honours were last issued in 2021 after the death of the Duke of Edinburgh. Twenty-seven soldiers and Marines who transported Philip to his resting place were honoured.

With the success of Italy’s Giorgia Meloni, compare and contrast with Liz Truss. Both head their countries most Right-wing post-war governments. Both grew up in Left-wing environments but started rebelling as teenagers. Both publicly disdain Emmanuel Macron and love the US. And both have shaken off shameful pasts – Giorgia’s quasi-fascism and (gulp) Liz’s membership of the Lib Dems. 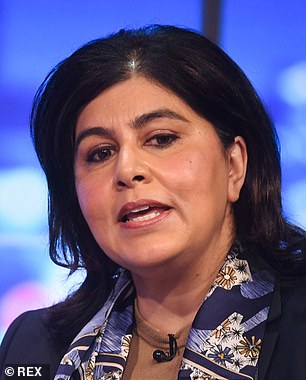 ‘I’m not in love with Tony Blair,’ retorts Campbell.

‘I swear, this romance, you should see them,’ adds Warsi. ‘As soon as Tony rings, it’s like an excitable date! It’s like his boyfriend has called him!’

During his last days in Downing Street, Boris Johnson ignored accusations of cronyism by appointing Harry Mount as an Independent Member of the House of Lords Appointments Commission. Harry, editor of The Oldie, author of The Wit and Wisdom of Boris Johnson, a former Bullingdon Club member and a second cousin of David Cameron, didn’t have any time to recommend anyone for a peerage. He has resigned before actually taking up the post.

Harry Potter’s Severus Snape, alias the late Alan Rickman, outed ex-PM John Major as a fan of Hogwarts School of Witchcraft and Wizardry during a Wimbledon tennis lunch. In his about to be published diaries, Rickman quotes Major as saying: ‘You have given us so much enjoyment.’ Rickman adds: ‘I wish I could say the same of you’ was the unstoppable reply. He had the grace to laugh.’