Like many people, Jeanette Pallister was keen to step up her exercise during lockdown. The 49-year-old pub landlady had regularly gone to fitness classes at a gym in the two years before the pandemic struck, but when they had to close again last December, she decided to start jogging.

Beginning with a run-walk programme — where you alternate between running and walking — she gradually built up so within four weeks she was jogging for 20 minutes at a time, covering two miles, three days a week.

This all came to a grinding halt less than two months after starting, as Jeanette, from Mayfair in London, developed a stress fracture in her right ankle — caused by repetitive pressure.

Jeanette is just one of many to suffer this type of injury in the past year, say health professionals. Typically because they’re new to exercise, increasing in intensity in a short space of time, with a lack of expertise at hand — a fitness instructor would gradually ease someone new into exercise — they’ve been pushing their bodies too much and too soon.

Like many people, Jeanette Pallister, 49, was keen to step up her exercise during lockdown

There’s been ‘a significant increase in the number of stress fractures in clinic in the past year’, says Kumar Kunasingam, a consultant orthopaedic surgeon specialising in ankle and foot surgery at Croydon NHS University Hospital and at the Schoen Clinic in Marylebone, London.

And where previously it was something he treated in elite athletes, ‘I am now seeing members of the public with stress fractures’, he says.

Ziad Harb, a consultant orthopaedic surgeon who specialises in foot and ankle surgery at Ashford and St Peter’s Hospital, Surrey, says he’s seen about a fourfold rise in stress fractures starting in the first lockdown.

‘It’s one of the most noticeable trends I’ve seen over the past year,’ he told Good Health.

A recurring theme is that patients have taken on a virtual ‘challenge’ — often inspired by a charity, to help with fundraising — such as running or walking 100 miles in a month. For many this is a drastic increase in regular and intense exercise.

With others it’s challenges inspired by TikTok (the video-based social media network) — ‘people injure themselves trying to replicate intense bursts of exercise such as dances’, says Mr Kunasingam. 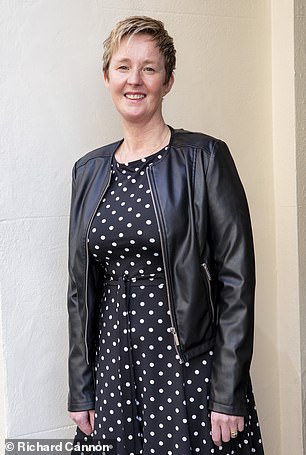 Jeanette, from Mayfair in London, developed a stress fracture in her right ankle — caused by repetitive pressure

A stress fracture is caused by overuse or ‘overloading’ the bone — the bone is weakened because it is not used to the demand being placed on it.

This overloading has a cumulative, damaging effect. ‘I’m now seeing patients who are literally breaking their bones to stay fit,’ says Mr Kunasingam.

‘It’s like flexing a ruler over the side of a desk; gradually cracks will appear and if you carry on doing it, it will snap.’

He adds: ‘Stress fractures are not caused by one incident but an accumulation of forces over weeks or months which build up in the bone.

‘Often the person can suffer a low grumbling pain during and after exercise for a period before they do anything about it, by which time it will get worse as they continue to run on it.’

Jeanette’s stress fracture was in her fibula, one of three bones that make up the ankle joint — a common site for stress fractures. A U.S. study in the Journal of Sports Medicine in 2015 found that 80 per cent of stress fractures occur in the lower limbs.

The five long bones, the metatarsals, which make up each of our toes, and the bones in the middle of the foot, are particularly vulnerable — perhaps not surprisingly, given that a force of up to three times our bodyweight can be exerted on the foot when running. Stress fractures can also occasionally occur in the hip, too.

More seasoned exercisers are also at risk if they increase their activity too rapidly or change where they run — moving from running on grass to hard pavements, for example. 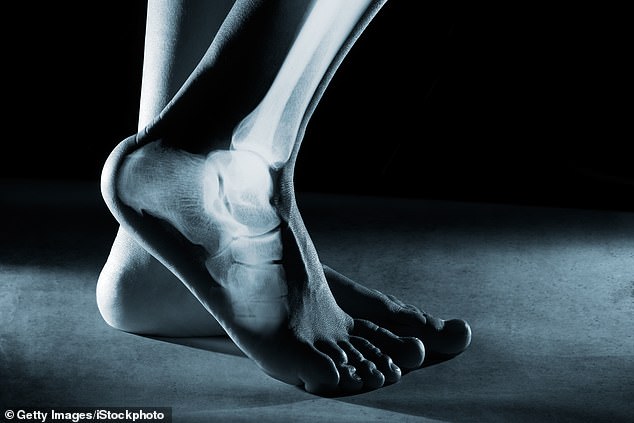 Jeanette is just one of many to suffer this type of injury in the past year, say health professionals (stock image)

Stress fractures are more common in women aged between 30 and 50, possibly due to hormonal changes and the effect on bone density — or a diet that lacks oily fish, red meat and fortified cereals, which contain vitamin D — essential to bone health. Mr Harb, who also works at the Princess Margaret Hospital, Windsor, says the underlying weakness is multifactorial but often there is also a lack of vitamin D.

External factors also play a part, he says — these include poor footwear, i.e. wearing fashion-style trainers rather than proper running shoes, running on unsuitable terrain (e.g. hard surfaces such as pavements), and running without warming up (which allows the muscles and tendons to prepare for exercise, improve their range of motion and prevent tightness).

Mother-of-two Jeanette, who runs a pub with husband Dave, 50, says she only took up jogging during lockdown ‘to get out more’.

On the day of her injury she’d gone out for her usual 20-minute run, then at lunchtime she went for a three-hour walk.

‘After returning home at about 5pm, my right ankle felt sore and quickly became red and swollen, and the front of it was in agony,’ she says. ‘Within about an hour it had doubled in size and it was too painful to walk on.

We reveal the ingredients in everyday products. 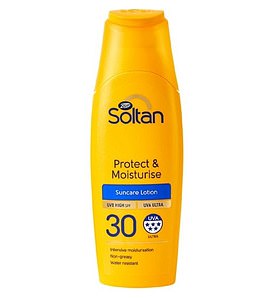 Octocrylene: A colourless liquid that absorbs UVB and UVA rays from the sun, to protect the skin from damage they can cause.

Butyl methoxydibenzoylmethane: A synthetic chemical which also absorbs UVA and UVB rays. It is sometimes found in hair products to prevent hair dye fading in sunlight.

C12-15 alkyl benzoate: An ‘emollient’ which softens the skin and enhances the texture of the cream.

‘Luckily, Dave still had some crutches from when he had a knee operation previously, so I used them to move.

‘But that evening my ankle was so puffed up, I could no longer see the ankle joint.’

It is important to get a stress fracture treated promptly, because if you continue to exercise on it, pain and swelling will worsen. That means it will not heal and it can potentially lead to requiring surgery if the fracture widens.

The only way for the bone to heal is to rest it and immobilise it (in an Aircast or ‘immobiliser’ boot and to use crutches).

Fortunately, Jeanette already had an appointment with her physiotherapist two days later about an unrelated shoulder injury. Worried her ankle was a stress fracture, he carried out the classic tests, including pressing over the tender area — which caused extreme pain.

As well as tenderness when touching the bone, other clues Mr Harb looks for include ‘swelling, warmth, difficulty weight-bearing, and a thickening of skin on the fat pad close to the toes — this can be an indication that an extra load is being put through metatarsals, for example’, he explains.

‘A tightness of the calf muscles can start bells ringing about a stress fracture, especially if they are also suffering swelling and pain in the foot,’ he adds. Stress fractures often can’t be seen on X-rays but show up on an MRI.

‘It is extremely important to identify the intrinsic and extrinsic causes, because without correcting these, stress fractures can get missed, take longer than average to heal, or most worryingly recur in the future,’ says Mr Harb. ‘If a stress fracture is spotted early, it would usually take around six weeks to heal.

‘But some bones have a poor blood supply so may take longer to heal, so the boot would have to be worn for longer.’

Physiotherapist Gary Jones of Physio 206 in Bromsgrove, Worcestershire, who has also seen more patients with stress fractures, says that coming out of an Aircast boot is not the end of the story.

‘It can be a long rehabilitation,’ he says. ‘For a stress fracture of the tibia — the shin bone — it can be up to four months before you can fully exercise on it again.

‘At first it will be very stiff and other parts of the body — such as the calf and foot muscles — will become weaker, as they are not being used in the normal way, which can start after only 48 hours of wearing the boot. It will require a phased return of stretching followed by building back up.’

At the end of March, Jeanette went back to see Mr Kunasingam. As well as taking a rest from jogging, she has done daily stretches of her ankle and begun using an exercise bike for ten minutes every other day.

With her fibula now healed sufficiently, she’s been allowed to go back to gentle jogging, working up to ten-minute jogs twice a week.

‘But I will be a bit wary of overdoing it and will stop if I feel any pain,’ she says. ‘I’m going to be very cautious about how I exercise in the future.’