A teenager who believed he was ‘invincible’ died in his sleep after he swallowed a single amphetamine tablet during a night out, despite having already suffered two seizures from taking Ecstasy in the past.

Jack Brereton had been repeatedly warned by his family about the dangers of taking party drugs, and his parents had told him that ‘he wasn’t the same as everybody else’, due to him suffering from epilepsy.

However, the 19-year-old was found dead by his mother at their home in Greater Manchester, just hours after his pupils were seen to be dilated during an evening out at a club. 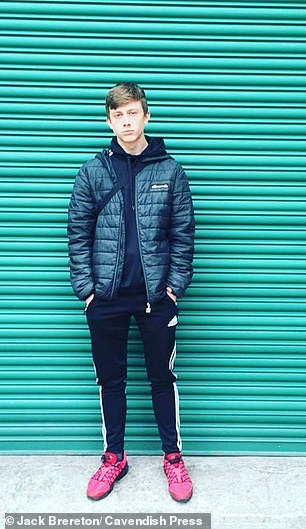 Jack Brereton (left) had been repeatedly warned by his family about the dangers of taking party drugs. The 19-year-old (also right) had recently completed courses with the Princes Trust

Tests revealed Jack died after the amphetamine tablet triggered a deadly seizure which killed him as he lay in bed.

An inquest heard the shop assistant had completed courses with the Princes Trust and the National Citizen Service but suffered from ‘absent seizures’ which cause sufferers to blank out or stare into space for a few seconds.

His mother Lisa Tennant told the Stockport hearing: ‘He was a lovely young man – he did the Princes Trust and did the NCS and he absolutely loved it and he had plans for the future.

‘He did experiment with recreational drugs but when he did he had a convulsion and the paramedics were called and we were called.

‘We spoke to him in July 2017 about him taking MDMA or ecstasy and he was very embarrassed and he believed his drink was spiked. 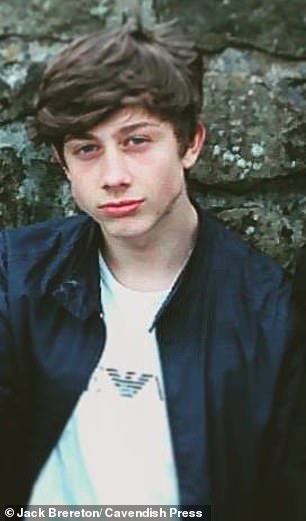 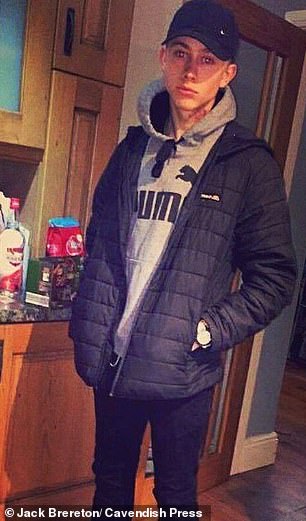 Jack (left) was found dead by his mother at their home in Manchester. The teenager (also right) had been out with friends before his death

‘But on November 2017 we had a phone call from the paramedics as it happened again and an ambulance was called. We were quite frightened but I was livid at the same time as being worried sick.

‘He confirmed he had taken it, we had a conversation with him about it – but I don’t think he thought about it being an issue.

‘He didn’t acknowledge the effect it had on him. He had epilepsy and he pretended he didn’t. 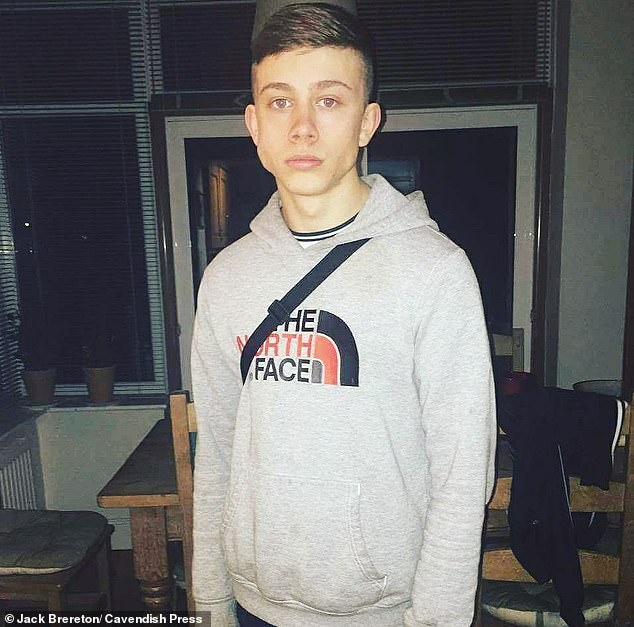 ‘Even though we told him he wasn’t the same as everybody else in that respect, he thought he was invincible – but he wasn’t.’

The tragedy occurred on May 5 when Jack went out with a friend Kai Witty who was due to be staying over that evening.

Mrs Tennant added: ‘He messaged later asking me to leave his key out as he had left his key in the house. I didn’t hear them come in, they must have been like mice. 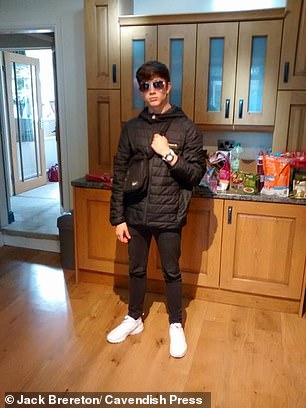 ‘Kai stayed over and when I got up in the morning the key was on the sofa so I knew that he was home. I went into his room to check they were back OK but Jack was face down on the bed as if he was hiding because it was too early.

‘Something didn’t seem right as he didn’t even acknowledge the fact I was there. I couldn’t believe it. I was in shock.

‘There was other children in the house that I had to keep out of the way so they wouldn’t see.

‘Kai was in shock. My husband called for paramedics but nothing could be done.’

In a statement Mr Witty said: ‘We arranged to go out drinking and I saw him have a couple of bottles of Budweisers but I didn’t think Jack took drugs of any kind.

‘He previously indicated he had taken drugs before but I never actually saw him take drugs. After we finished we went to get some food from McDonald’s. We got back around 4am.

‘Before he went to sleep he asked if we were going to sleep straight away and I said I was going to because I was knackered. I didn’t wake up until his mum came into the room in the morning.’

Tests showed amphetamine and meth amphetamine was found in Jack’s blood, but not in excess. 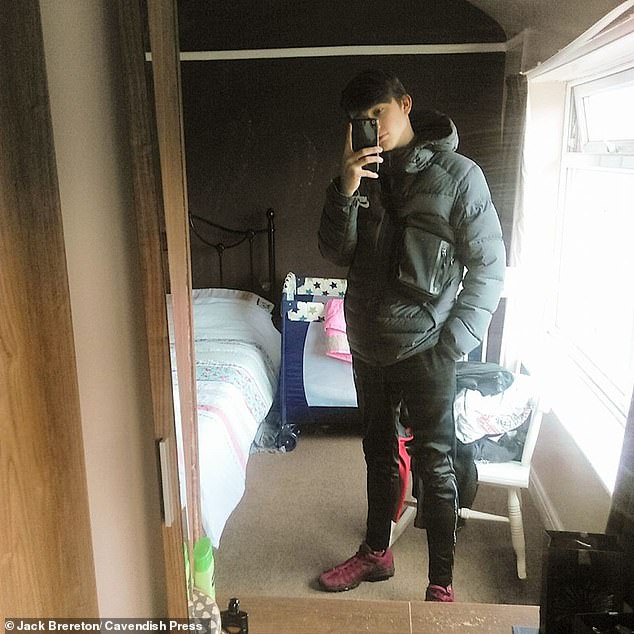 A post-mortem report concluded the teenager died of ‘sudden unexpected death’ and epilepsy due to amphetamine use.

Det Insp Gina Brennand who investigated said: ‘There were two previous incidents, after the last incident his family had spoken to him about his use of drugs and it was agreed he was not to take them again. He was happy in the last few days of his life.

‘A friend, Charlotte Summer said he had been out the previous evening and noticed Jack’s pupils were dilated and she asked him: ‘Why Do you look so on it?’ And he said: ‘because I am’. He said he had taken a pill but he didn’t say what it was or where he had got it from.

Ecstasy, known chemically as MDMA or molly, has been used by clubbers for decades due to its effects in helping keep people awake.

It can come in the form of various pills and often takes about 30 minutes for its long-lasting effects to kick in, which can include feelings of love.

In the UK, possession of any form of ecstasy – considered a Class A drug – comes with a potential jail term of up to seven years. In the US, the jail term can be as severe as 40 years in some states.

Drug campaigners warn the biggest of taking MDMA revolves around the fact that many users are unaware of what is in the substance they are taking.

It can include other drugs, such as PMA, which can be fatal in lower doses than MDMA itself.

The Office for National Statistics recorded an eight fold increase in ecstasy deaths last year compared to 5 years ago.

The statistics showed that 63 people died from taking MDMA in 2016 – significantly higher than that of the record low in 2010 of eight deaths.

‘They left a bar at 2am. They had been drinking alcohol during the course of the evening and went home.

‘Jack asked Kai if he wanted to sleep straight away or stay up for a bit and Kai told Jack he was knackered so they went to sleep.

‘There was no evidence of their being third party involvement.’

Jack’s GP Dr Andrew Stringer said: ‘He was diagnosed in May 2014 with epilepsy. He was on medication but then he didn’t have any spells for some years so he was taken off the medication.

‘He had been taken to A&E after some convulsions after taking ecstasy. He was told to stop his use of recreational drugs and moderate his alcohol intake by family.

Coroner Alison Mutch recorded a conclusion of accidental death and told Mrs Tennant: ‘I know it’s terrible to talk about somebody in these circumstances, especially speaking about a child at that age, the sense of shock you felt on that day is evident.

‘It came across in your evidence that he was a picture of a young man who was prepared to work in the community, he successfully completed the NCS and he was successful with the Princes Trust.

‘He was offered a job and was looking forward to starting that, he had a sense of achievement which comes with working. It is clear he came from a supportive family and you were very close.

‘You did speak to him about his taking of amphetamine but you did summarise it yourself by saying that teenagers think they are invincible. Who knows what was going on in his mind.

‘His friends had no concern at all in the evening leading up to his death. They crashed in Jack’s room, his friend slept on the floor and Jack slept in his bed.

‘When you found Jack he was probably dead. Nothing more could have been done for Jack.

‘He thought he was not a child anymore, but he was your child. He had an unwitnessed seizure triggered by the use of amphetamine.