Erling Haaland’s incredible box-to-box run is clocked up as 60 metres in just 6.64 seconds

Erling Haaland’s incredible box-to-box run is clocked up as 60 metres in just 6.64 seconds… enough to put him in a World Championship sprinting final!

Borussia Dortmund hero Erling Haaland had a blinder last night. As well as his two-goal, match-winning performance, he displayed his lightning quick pace as he ran 60 metres so fast, he was just 0.3 seconds off the 60m world record time!

The Norwegian, who has been a revelation since signing from RB Salzburg last month, scored a tap-in and a peach of a strike to give Dortmund a 2-1 lead against PSG in their Champions League last-16 tie.

And after clearing a corner at his near-post in the first-half, the 19-year-old showed off his incredible pace as he surged down the middle of the pitch to support a counter-attack, with stats later showing he ran 60 metres in a blistering 6.64 seconds.

Stop what you are doing and look at how fast Erling Haaland is ?

Clears the corner at the near post then charges up the pitch like an Olympic sprinter! pic.twitter.com/FASi2VgJhZ

In fact, that time would’ve been enough to see Haaland qualify for the World Championship 60m final, judging by the times recorded in 2018.

The world record is set at 6.34 seconds by Christian Coleman, who ran the time in Albuquerque in 2018.

Though obviously running with momentum behind him and with no one able to keep up with him, Jadon Sancho opted not to use Haaland in the attack.

Instead, the England international used his run as a decoy to shoot, but pulled his shot wide of the goal.

Nevertheless, the evening belonged to Haaland, who after his brace has now scored 10 Champions League goals in just seven appearances, reaching the mark four games quicker than any other player in the competition’s history.

The teenager also became just the fifth man to reach 10 goals in his debut season in the Champions League, joining the likes of Roberto Firmino, Sadio Mane, Claudio Sulser and Just Fontaine in achieving the feat.

Haaland poaches his first goal, stabbing in from close range to give Dortmund the lead 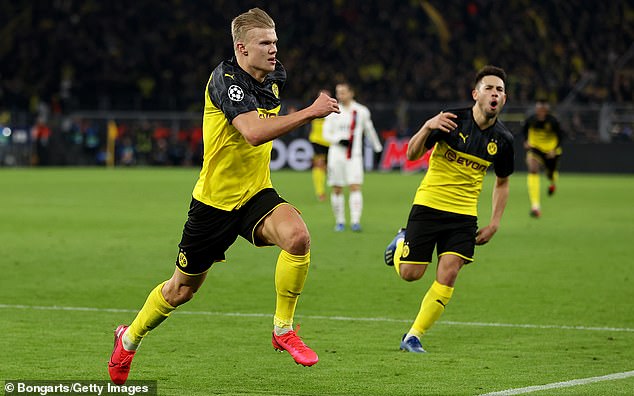 He showed his predator instincts with the opening goal, pouncing from close-range, while his second was a powerful left-footed strike from outside the box which gave Keylor Navas absolutely no chance.

Haaland scored a hat-trick in his first Champions League game, against Genk on matchday one, and also scored at Anfield in the group-stages.

The biggest breakthrough star this season will now look to finish the job at the Parc des Princes in three weeks’ time, as PSG look to mount a comeback.