The eruption of Mount Vesuvius in 79 AD is one of the most famous and deadly natural disasters in history.

But the raging volcano snuffed out thousands of lives in Pompeii in just 15 minutes, according to a new study.

The majority of victims died from asphyxiation by the giant cloud of scorching volcanic ash and gases the eruption released.

Researchers believe most would have survived if the lethal plumes, known as pyroclastic flows, had only lasted a few minutes -but their modeling suggests the city was engulfed for almost 20 minutes.

The closeness of Herculaneum to Vesuvius meant residents had no hope. But researchers believe the inhabitants of Pompeii, which was miles away, could have survived if the toxic cloud of volcanic ash and gases from the eruption had lasted a shorter duration

In the first century, Pompeii was a thriving industrial hub with luxurious private villas.

The eruption of Vesuvius on October 24, 79 AD, though, buried Pompeii and the nearby towns of Oplontis, Stabiae and Herculaneum under ash, mud and rock fragments.

It’s estimated at least 2,000 people lost their lives in the wake of the eruption.

Some were killed by the shower of pumice and volcanic rock known as lapilli, others may have been trampled in the frenzied panic. 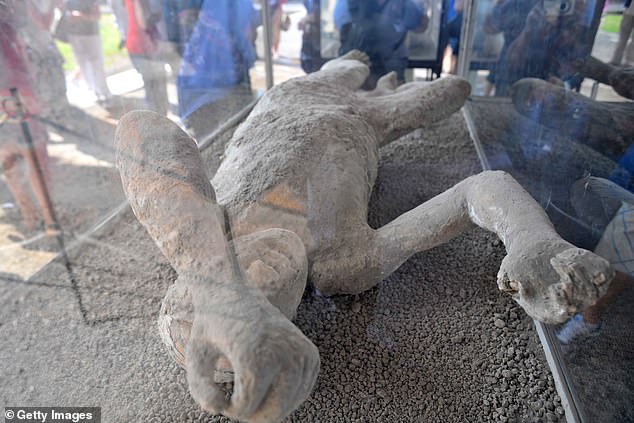 The speed and timing of the pyroclastic flow meant most people in Pompeii were asphyxiated in their beds or as they huddled in their homes for safety. Pictured: Calcinated corpse in Pompeii, 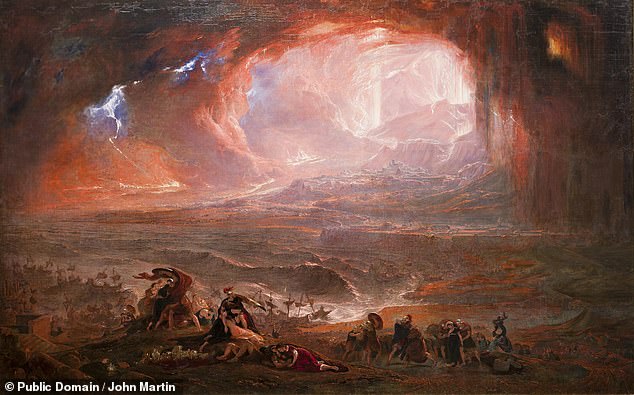 In 79 AD, Pompeii was submerged beneath pyroclastic flows of searing gas and volcanic ash from the eruption of Vesuvius — as depicted in John Martin’s 1821 work ‘Destruction of Pompeii and Herculaneum’, pictured 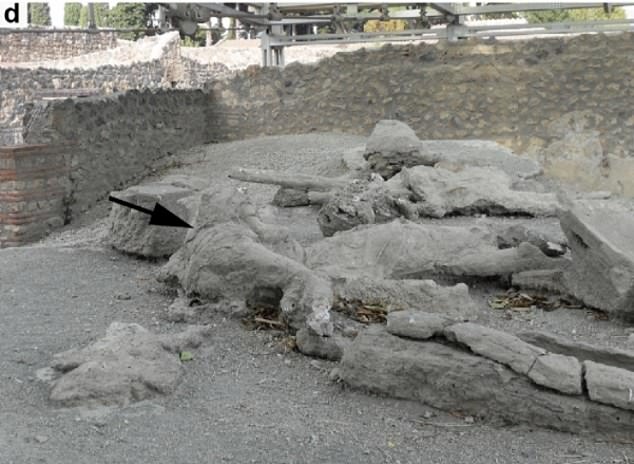 The speed and timing of the pyroclastic flow meant most people in Pompeii were asphyxiated in their beds or as they huddled in their homes for safety.

But most choked to death on the pyroclastic flow, a dense collection of carbon-dioxide and volcanic ash that flows down the side of an erupting volcano.

The clouds are more dangerous to humans than lava because they travel faster—up to 450mph—and can reach temperatures of 1,800° F.

According to previous researchers, the first pyroclastic surges starting at midnight and would have made the six-mile journey from Vesuvius to Pompeii in a few scant minutes, enveloping the city almost as fast.

Working with colleagues at the University of Bari and the British Geological Survey of Edinburgh, Roberto Isaia, a senior researcher with the National Institute of Geophysics and Volcanology in Rome, developed a model to quantify the pyroclastic flows’ effect on inhabitants. 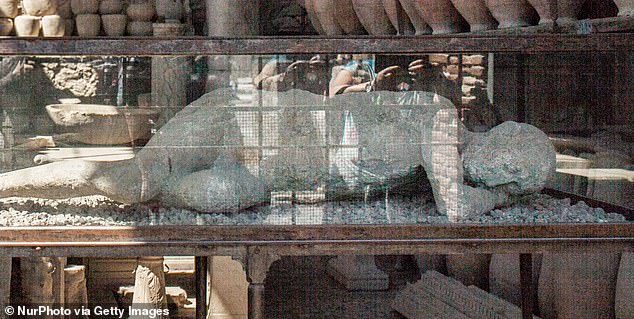 It’s estimated at least 2,000 people lost their lives in the wake of the eruption

At Herculaneum, at the foot of the volcano, the temperature and strength of the pyroclastic flow was so high ‘that survival was impossible,’ the researchers wrote in a new study published in the journal Scientific Reports.

Pompeii was further away, so survival would have been possible if the flow lasted just a few minutes or less.

According to their model, though, the cloud engulfed the city for approximately 17 minutes, ‘long enough to make lethal the breathing of ash suspended in the current.’

‘We conclude that in distal areas where the mechanical and thermal effects of a pyroclastic density currents are diminished, flow duration is the key for survival,’ they wrote.

The speed and timing of the cloud meant most people were asphyxiated in their beds or as they huddled in their homes for safety. 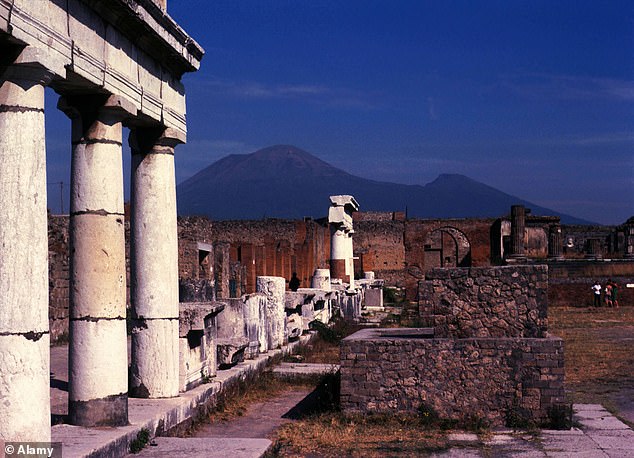 Pliny the Younger described a column of smoke ‘like an umbrella pine’ rising from Vesuvius and turning nearby towns as black as nightArchaeologists discover ancient Roman SNACK BAR in Pompeii. Pictured: Roman ruins at Pompeii

‘Those 15 minutes inside that infernal cloud must have been interminable,’ Isaia told The Guardian. ‘The inhabitants could not have imagined what was happening. The Pompeians lived with earthquakes, but not with eruptions, so they were taken by surprise and swept away by that incandescent cloud of ash.’

In contemporary letters describing the disaster from a distance, Roman author Pliny the Younger said a column of smoke ‘like an umbrella pine’ rose from Vesuvius, turning the towns around it as black as night, although the eruption had started at 1pm.

Over two days the volcano released more than 100,000 times the thermal energy of the atomic bombs dropped on Hiroshima and Nagasaki.

It also unleashed an avalanche of hot ash, rock and poisonous gas rushed down the side of the volcano at speeds of over 100 mph, ultimately burying residents, livestock, buildings and all remnants of life in up to 30 feet of ash and debris.

The city remained hidden for nearly 1700 years until Pompeii was rediscovered by Spanish military engineers in the mid-18th century.

Today, the ruins of Pompeii are a popular tourist attraction, drawing a million visitors a year. 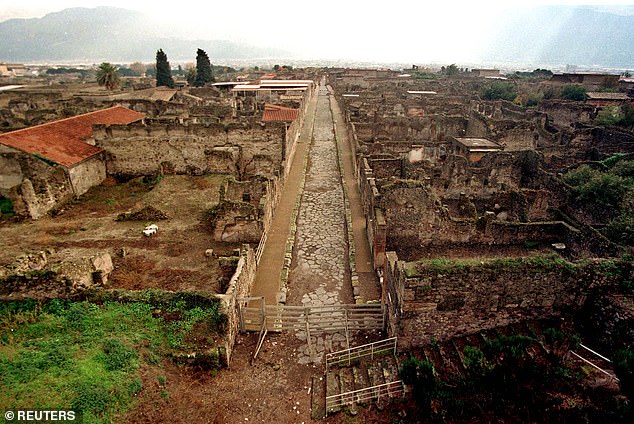 According to modeling by researchers, the city was enveloped by the pyroclastic flow for 17 minutes, ‘long enough to make lethal the breathing of ash suspended in the current.’ Pictured: A view of the archaeological site of Pompeii

Located on the west coast of Italy, Vesuvius is the only active volcano in continental Europe.

Contrary to popular belief, the eruption that engulfed Pompeii didn’t kill all of the inhabitants. 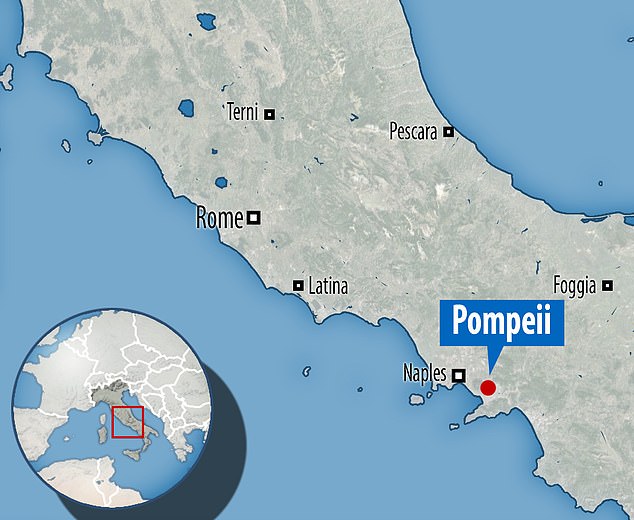 Today, the ruins of Pompeii are a popular tourist attraction, drawing a million visitors a year. Located on the west coast of Italy, Vesuvius is the only active volcano in continental Europe

It’s estimated some 2,000 people died in Pompeii and Herculaneum, but the cities had a population of almost 20,000.

According to a 2019 report in the journal Analecta Romana, survivors resettled in other communities along the southern coast of Italy, and many actually married other survivors.

Centuries after its rediscovery archaeologists ontinue to make new finds: In December, Pompeii Archaeological Park chief Massimo Osanna announced the discovery of a thermopolium, an ancient Roman version of a fast-food restaurant.

Murals of ducks, roosters and other animals suggest what was on the snack bar’s menu, as do remains from goats, pigs, fish and snails.

‘We know what they were eating’ when Visuvious erupted, Osanna said.

WHAT HAPPENED TO POMPEII?

Mount Vesuvius erupted in 79 AD, burying Pompeii, Oplontis and Stabiae under ashes and rock fragments, and the seaside town of Herculaneum under a mudflow.

Pompeii was hit with  1000°F  pyroclastic flows, dense collection of hot gas and volcanic materials that flow down the side of an erupting volcano at high speed.

They are more dangerous than lava because they travel faster, at speeds of around 450mph.

Mount Vesuvius erupted in 79 AD, burying Pompeii, Oplontis, and Stabiae under ashes and rock and Herculaneum under a mudflow

People ran for their lives with torches, screaming and some wept as rain of ash and pumice fell for several hours.

While the eruption lasted for around 24 hours, the first pyroclastic surges began at midnight, causing the volcano’s column to collapse.

An avalanche of hot ash, rock and poisonous gas rushed down the side of the volcano at more than 100mph, burying victims and remnants of everyday life.

Hundreds of refugees sheltering in the vaulted arcades at Herculaneum, clutching their jewelry and money, were killed instantly.

As people fled or hid in their homes, their bodies were covered by blankets of the surge.

It’s estimated some 2,000 people died in Pompeii and Herculaneum alone.

What have they found?

This event ended life in the cities but preserved them until their rediscovery by archaeologists nearly 1700 years later.

The excavation of Pompeii, the industrial hub of the region and Herculaneum, a small beach resort, has given unparalleled insight into Roman life.

Archaeologists are continually uncovering more from the ash-covered city.

In recent years, they uncovered an alleyway of grand houses, with balconies left mostly intact and still in their original hues.

A plaster cast of a dog, from the House of Orpheus, Pompeii, AD 79. Around 30,000 people are believed to have died in the chaos, with bodies still being discovered to this day

Some of the balconies even had amphorae – the conical-shaped terra cotta vases that were used to hold wine and oil in ancient Roman times.