Escape to the Chateau viewers go wild over James Strawbridge

Escape to the Chateau’s viewers were left swooning last night as Dick’s handsome tattooed son appeared on the show.

The hit Channel 4 programme – which was the channel’s biggest in 2020 – follows Dick Strawbridge and wife Angel as they renovate a run-down 45-room moated chateau bought for just £280,000 in 2015 – which now hosts fairytale weddings in the Pays de la Loire region.

Last night’s episode of the Channel 4 show saw Dick, 59, and Angel, 48, who are parents to Arthur, six, and Dorothy, five, hosting a friend’s 50th birthday party at the chateau.

They were joined by James, who appeared with his father and mother Brigit Weiner in the BBC series It’s Not Easy Being Green in 2006, which followed their family’s attempt to live as green a life as possible.

Now a professional chef, James, 38, joined Dick and Arthur in the kitchen to cook up a storm for the event.

Many of those watching were wowed by the chef, with one writing: ‘Nice to see James back at the chateau!

Meanwhile another added: ‘James is 38 years old? Blimey, he was in his early 20s when he and Dick’s first family lived nearby.

During the programme, the couple said they were looking to host a birthday party for mutual friend Sophie, who introduced them to one another. 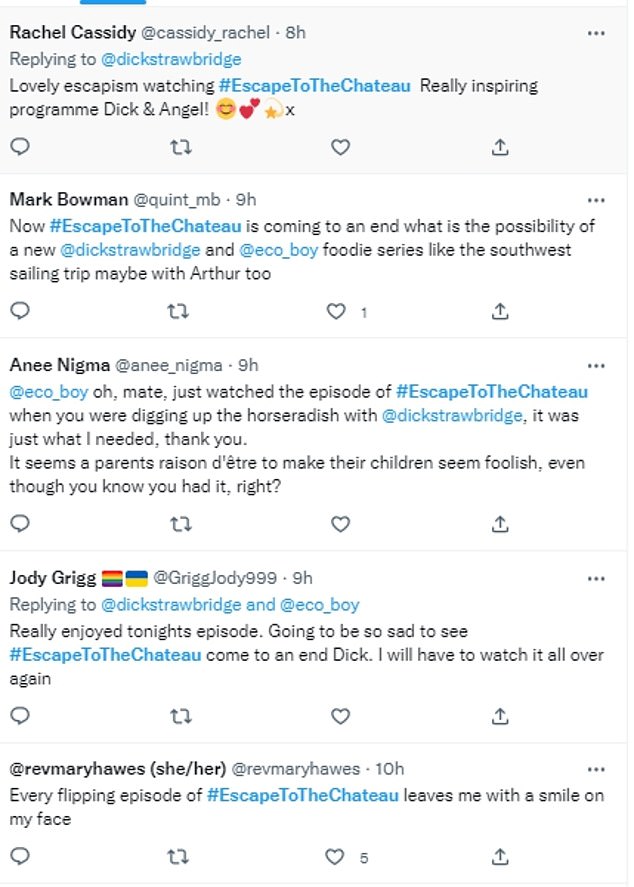 To thank Sophie for everything that happened since, Dick and Angel invited her and her family and friends to France to celebrate her 50th birthday.

The couple planned to host 30-40 people at the event, with Dick saying James should ‘help because he loves Sophie anyway.’

After settling on gold as the theme for the party, James arrived at the chateau to help organise the big event.

Dick and James visited the garden, to see what flowers and herbs could be used in the recipe, before deciding on beef as the dish for the party.

James said: ‘I love the idea of you and the chateau as a British, French fusion, so maybe we do the same with the meal.’ 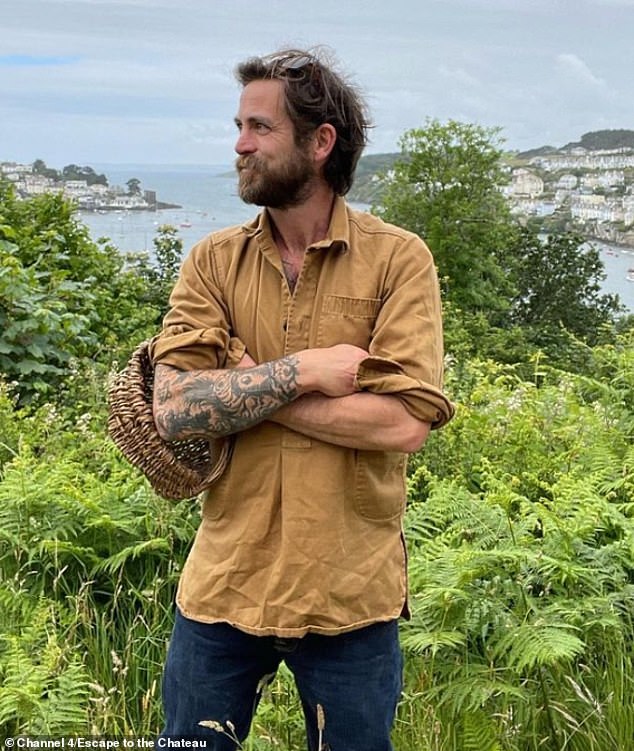 James appeared with his father and mother Brigit Weiner in the BBC series It’s Not Easy Being Green in 2006, which followed their family’s attempt to live as green a life as possible

He suggested it feel like a very French dish but with an English style twist.

Preparations for the 50th birthday party quickly began taking place, with Dick, James and Arthur cooking up a storm in the kitchen together.

After Arthur suggested making cheese sticks, James said he could make a sweet dip for the finger food.

Dick said: ‘It makes me very happy cooking with you two.’ 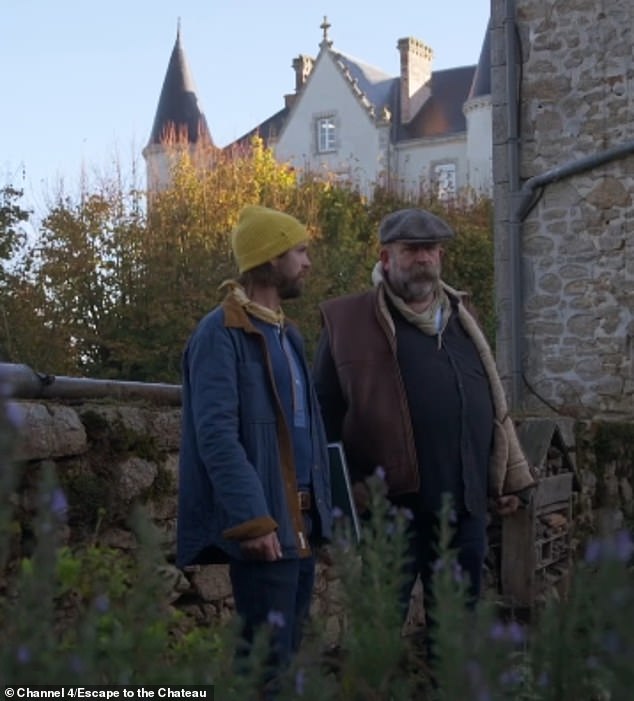 The 38-year-old said he was overjoyed to be back at the chateau with his father, wife and half-siblings

James said: ‘It’s really nice, I really like the idea of tea – but I think we need a stronger rum.’

Dick and James finished off preparing the al fresco feast for 40 guests, while Angel decorated the space with bamboo candle sticks.

Sophie arrived at the chateau to huge hugs and smiles from the family, with the group quickly coming together.

Celebrations began, and while the theme may have been gold, it was the love of Dick and Angel for their friend which shined the brightest.

Angel said: ‘To the Strawbridge boys, it’s rare having them all in the kitchen together so it’s a pleasure.’ 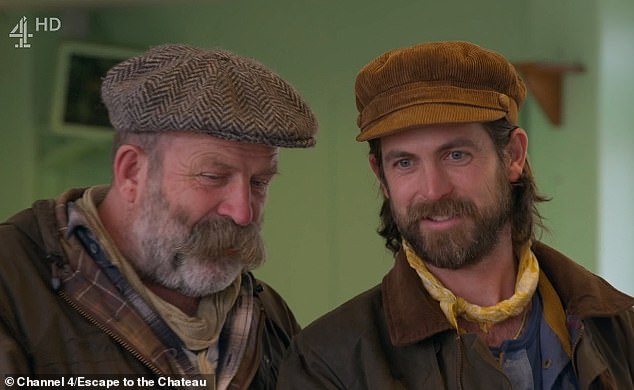 And to Dick’s delight, the boys were all working well together.

The series was coined in 2014 after an executive at Spark Media heard that Angel and Dick, a former army officer who has appeared as an engineering expert on TV shows such as Channel 4’s Scrapheap Challenge, were leaving their two- bedroom flat in Southend, Essex, for a new life in France.

After searching for the chateau for four years, Dick and Angel bought the sprawling 19th century building in 2015 after swapping their two-bed home in east London.

How much will a wedding at the chateau set you back?

The full run-down of the costs a wedding weekend for 80 at the chateau include:

The series is full of arguments and tiffs over stressful renovations, precious moments with their children Arthur, and Dorothy, eight and creating happy memories with newlyweds.

The chateau has since been valued at £2million but the couple also cash in through TV rights from Channel 4 for the series and its day-time spin off.

Dick and Angel also host fairytale weddings receiving up to £38,000 per wedding. The average price, however, comes out at around £19,000.

A six-course wedding dinner plus canapes upon arrival, a cheese and meat table during the evening and an unlimited full bar for the day for the maximum 80 guests will set you back £20,000, a post-wedding brunch £1,600 and hiring the chateau for the weekend is £6,250.

As well as weddings, the couple also sell glamping nights for £350 in ‘geodesic domes’ in the chateau’s grounds and £230 ‘days of decadence’ where you can meet Dick and Angel, enjoying lunch and afternoon tea at the chateau.

And the couple even charge guests £75 for a ‘working day in the garden’, with the website saying: ‘Yes to be frankly honest we are charging you to come and work! And in return you have to help make the place beautiful!’.

They have a separate ‘Chateau Products’ team based in Swindon, Wiltshire, to deal with all the merchandise inquiries.

However it wasn’t always plain sailing for the family who bought the property with no electricity, water or sewage – and a sanitation system that was emptied in the moat.

Over the last few years, viewers have seen them transform the chateau into a flourishing business but they were also hit by damaging bullying claims in 2021.

Last year, it was reported that sources close to Spark Media, the independent production company that filmed the first four series of ETTC, had accused Dick and Angel of bullying.

Dick was accused of pushing one crew member around a room, and threatening to throw another ‘out the f*****g window’ while brandishing a hammer. Both were also said to have sworn at TV staff. 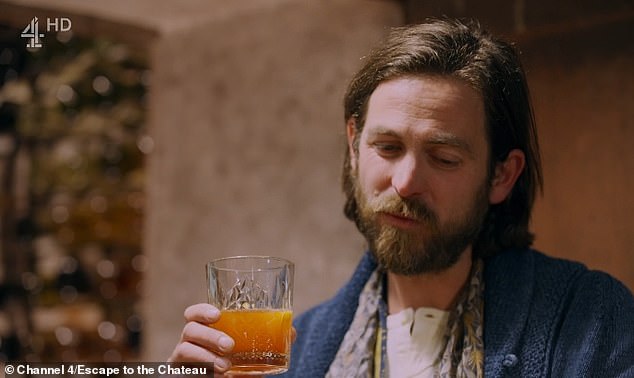 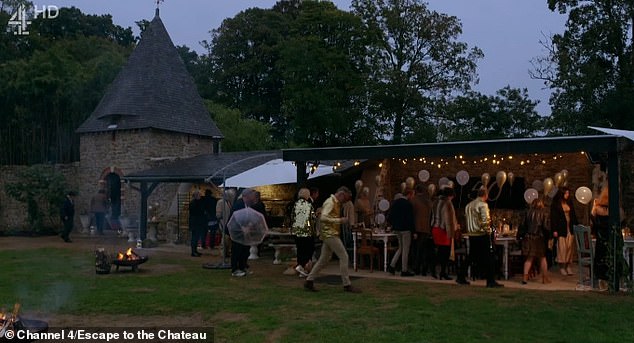 The event, which took place in the garden of the chateau, went off without a hitch, with James joining Dick and Arthur to cook

Dick and Angel — deeply dismayed by the accusations — wasted no time in categorically denying them. In detailed testimony via their representative, the couple have emphasised not only the warm atmosphere among the team that currently makes their show, but also their long-held, high professional standards, which they say has helped bring their chateau fantasy to successful fruition.

And no one can deny that theirs is the original entrepreneurial dream come true, powered largely by the determined Dick, who has decades of experience in television.

With such high standards, the Strawbridges say, of course, comes high pressure — yet, still, their representative stressed that production members associated with the couple over many years found ‘working with our clients at the chateau is a lovely experience.’

They also made accusations of their own of outrageous behaviour among the Spark’s production team.

Meanwhile, Channel 4 has denied all knowledge of the row, saying in a statement: ‘Channel 4 does not tolerate bullying or abusive behaviour in any of its productions.

‘Channel 4 was not aware of any of the alleged behaviour by Dick and Angel as described in these claims, which we understand relate to a period well before the current producers started making the series.’