Take a Frenchman who has lived in Newcastle for 20 years and what do you get? A Dutchman.

Such is the inflection in the GM’s voice at Eslington Villa that I simply don’t believe he’s French. ‘You have to be Dutch,’ I tell him. ‘Ay,’ he says. ‘French.’

This gets me going. 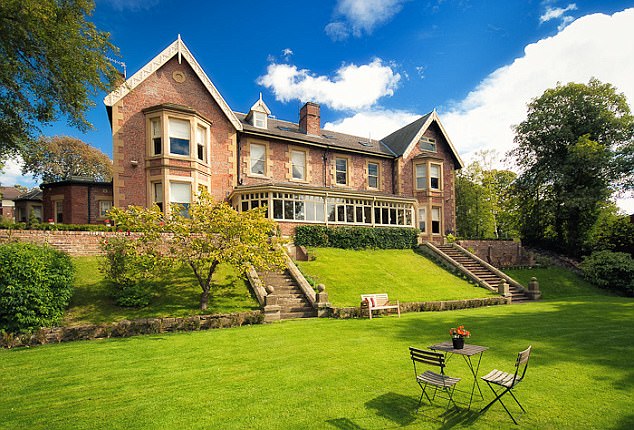 ‘So where are you from?’ I ask the woman who shows me to a room on the top floor of this large Victorian house on the outskirts of the city.

She has a North-East timbre, too. I start in Norway and work south. Turns out she’s Spanish, but followed her boyfriend to Gateshead nine years ago.

It’s intriguing, because this is a thoroughly old-fashioned British hotel that has belonged to the same family for nearly 30 years.

There’s a hint of an old people’s home about it: a whiff of cleaning products in the corridors, thick carpets, faded prints — but it’s spotlessly clean and welcoming.

My room is called Pine and Miss Geordie-Spain says it’s her favourite, most likely because of the huge bathroom that has a walk-in shower behind the free-standing bath.

It’s quiet, with a side view of the large garden, replete with a gazebo for weddings.

My dinner is delicious and includes three oysters for £7. ‘Why not have them as an amuse-bouche?’ says the GM.

So I do, followed by a carrot and feta salad, then pork fillet strips on wilted spinach.

Lots of locals are here for a night out. Staff rush about. It’s delightfully jolly.

The let-down comes in the morning when breakfast is served in a dark and dreary room. I’ve ordered papers, but none arrives; the fried eggs don’t taste of anything and the toast is underdone.

The GM is off duty. I sense his presence keeps standards up.