For more than 60 years, Connie Scott has had a trusted GP surgery five minutes from home.

And although things have changed since the days when the family doctor knew all her children by name, it is still a precious service.

So when she received a letter saying the surgery was closing, she knew she had to do something to help. And she has.

How dare they do this: 89-year-old Connie Scott appeared in a campaign video online

The 89-year-old great-grandmother has become the face of her community’s fight to stop the Osler House surgery closing its doors. ‘I can’t tell you how angry I was when I got that letter,’ she said. ‘I wanted to go out on to the street and shout, ‘How dare they do this!’

There was no public consultation over the closure of the surgery in Potter Street, a suburb in Harlow, Essex.

After the practice closes on Monday, Mrs Scott will have to make a 40-minute round trip taking four buses to get to a GP.

In a protest video, which has been viewed thousands of times online, she says: ‘I’m absolutely devastated. I moved down into Harlow in 1953 with two little babies. I have always lived in Potter Street and this has always been our surgery and I just feel that they have sold us out. It’s an absolute disgrace what they have done to us.’ 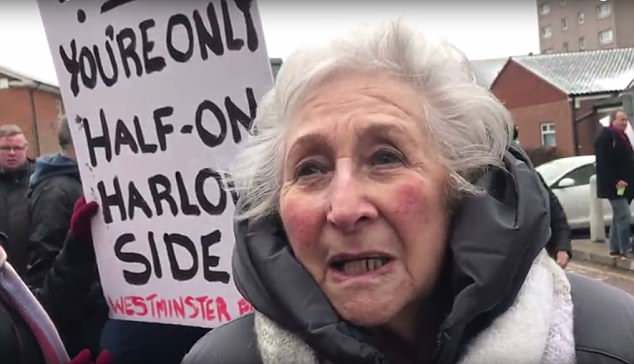 Save our surgery! Mrs Scott pictured on the streets leading the protests in a viral video with thousands of views 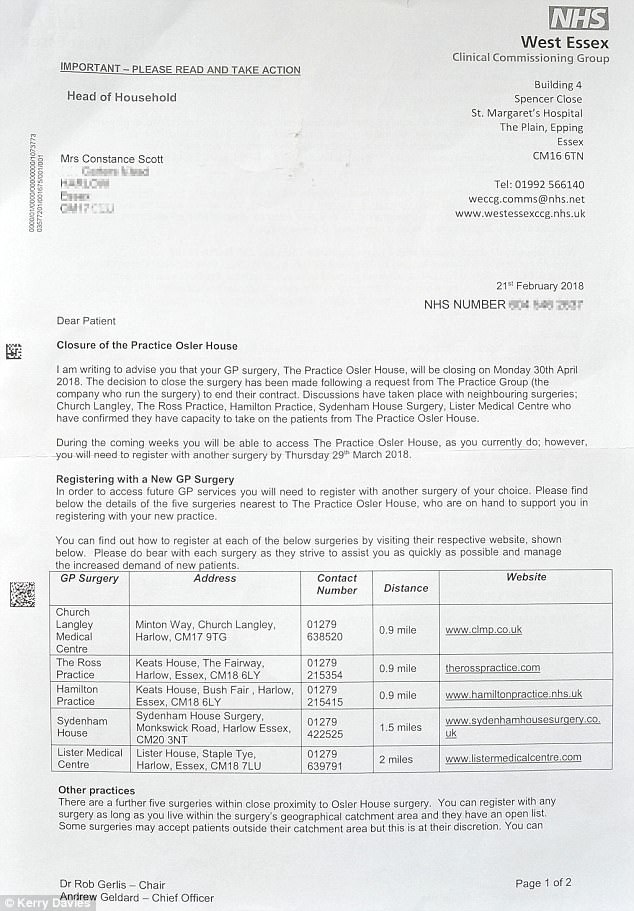 The first that Mrs Scott and the surgery’s 3,300 other patients knew about the closure was a letter (shown) informing them it was to shut in little over a month

Mrs Scott signed up as a patient at the surgery when it first opened in 1955. She and her late husband Bert moved to the area in 1953, attracted to the new town by the opportunities it promised away from a war-ravaged London.

The mother of three remembers the family doctor rushing to her home in the dead of night when her eldest daughter, Madeline, had meningitis.

‘The family doctor knew all my girls’ names and would ask after them,’ she said. ‘There was such a community feel about the place. The community even named a new estate, Meyrick Mead, after Dr John Meyrick, one of the original doctors at Osler House. But now there is such a huge turnover these days they don’t have time to get to know you.’

The first that Mrs Scott and the surgery’s 3,300 other patients knew about the closure was a letter informing them it was to shut in little over a month. 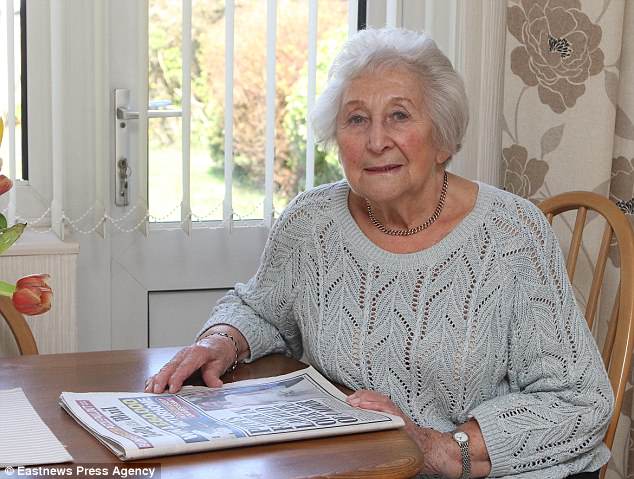 After the practice closes on Monday, Mrs Scott will have to make a 40-minute round trip taking four buses to get to a GP

To add to the insult, patients found the surgery is run by a firm that is part owned by an American health insurance company based 4,000 miles away in St Louis, Missouri. The closure is one of scores across the country, with official figures revealing that two surgeries are now shutting a week.

He said the current GP was not asked to stay on and although other GP practices had been prepared to take Osler House on as a satellite surgery this had not been considered.

She said: ”I wouldn’t have thought that they had the power to close that surgery without consultation. But they have got away with it’

He also questioned why an alternative company was not found to run it after the current firm bowed out of its contract.

He said government funding to the West Essex Clinical Commissioning Group, which awards contracts to run surgeries, has increased every year – and recorded a surplus of £7.3million in 2016/17. ‘I am appalled by the way that this has been handled, I wasn’t even told as a local MP,’ he said.

‘I’ve made it very clear that I believe the closure to be a wrong decision. Harlow is a rapidly expanding town and it makes no sense to close a surgery which has been serving Potter Street for over 60 years. ‘I am very concerned that I received no prior notice of this closure and that the decision appears to have been reached without any consultation with patients, user groups, and the wider community.’

Mr Halfon has taken his complaint to NHS minister Steve Brine as CCGs have a legal duty to consider the impact a closure will have on the local community.

Mrs Scott takes a starring role in the online video, filmed as residents protested on the street about the loss of Osler House.

Later she told the Mail: ‘We have been told they are doing it because the surgery doesn’t have many patients. But 3,000 is not a small amount. It has all been done so underhand.

‘I wouldn’t have thought that they had the power to close that surgery without consultation. But they have got away with it.’

A spokesman for West Essex CCG said the Osler House patients were now registered with one of ten other surgeries in Harlow, three of which are within 1.2 miles.

The spokesman added the CCG had approached the five practices closest to the site to see if any could take it over but talks with two were unsuccessful.

NHS bosses have complained to the Home Office after 100 Indian doctors were denied visas to work in the UK. British doctors say immigration rules that cap non-EU skilled workers are harming patient safety because of a staff shortage in the NHS.

How Americans grabbed a slice of our NHS

The decision to close the Osler House surgery in Harlow has its roots more than 4,000 miles away in the US.

The surgery is part of The Practice Group – one of the largest GP providers in the UK with around 50 surgeries and health centres responsible for more than 200,000 patients.

But despite dealing with more than a million NHS appointments a year, the Group’s major stakeholder is a multi-billion pound health insurance company called the Centene Corporation – based in St Louis, Missouri.

Changes introduced by the Labour government in 2004, allowed companies to bid for short-term contracts with NHS clinical commissioning groups.

Centene took advantage of this to buy into The Practice Group, later increasing its stake from 49 to 75 per cent in 2016.

It means the company, listed on the New York Stock exchange, now has the final say over a number of GP surgeries in England, and can close them if they are not profitable.

Its involvement has coincided with the closure of a number of surgeries by The Practice Group, often in areas of high deprivation where it is difficult to make a profit.

Two years ago, there was a similar public outcry when it terminated five contracts in Brighton leaving 11,500 patients looking for a new GP. It has also closed a surgery in Camden Road, London, the Maybury surgery in Woking, the Brandon Street practice in Leicester and the Arboretum surgery in Nottingham.

The latest, Osler House, will close on Monday after the company gave up its contract with the West Essex Clinical Commissioning Group, stating that it was not ‘financially viable’ for them to continue to run such a small service.

Richard Vautrey, of the British Medical Association’s GP committee, said the closure of surgeries by private consortiums was a growing problem.

A spokesman for The Practice Group said: ‘The wellbeing of patients is central to every decision we make, which is why we have worked closely with the local NHS commissioning body, West Essex CCG and other local GP practices to ensure the handful of patients we have receive uninterrupted care provision.’