Estate agents sell a £1million house in Britain every 27 minutes, in a stark reminder of the country’s sky-high property prices.

A total of 53 properties in the price category change hands every single day, according to estate agent Savills – the fastest rate the country has ever seen.

London is responsible for far the largest number of top-priced properties thanks to years of red-hot growth and a crippling shortage of houses.

London is responsible for far the largest number of top-priced properties thanks to years of red-hot growth and a crippling shortage of houses. Pictured: Portobello Road in West London

But Essex is the fastest-growing spot outside the capital, with a 58 per cent rise in sales for £1million or more in the last three years.

The towns of Chigwell and Brentwood and the city of Chelmsford have all seen solid growth, and the price of rural mansions is up too.

Agents put it down to families cashing in on their London homes and moving out to greener areas where the same money buys more space.

At the cheapest end of the market, just 31 homes were bought for seven figures in Wales and 36 in the North East.

Lucian Cook of Savills said: ‘Despite pressure on house prices in some of the most valuable parts of the capital, the number of sales over £1million across the country as a whole has proved surprisingly robust, given stamp duty costs and the level of political uncertainty.’ The surge in ultra-expensive property further highlights the difficulties faced by first-time buyers struggling to get on the ladder. 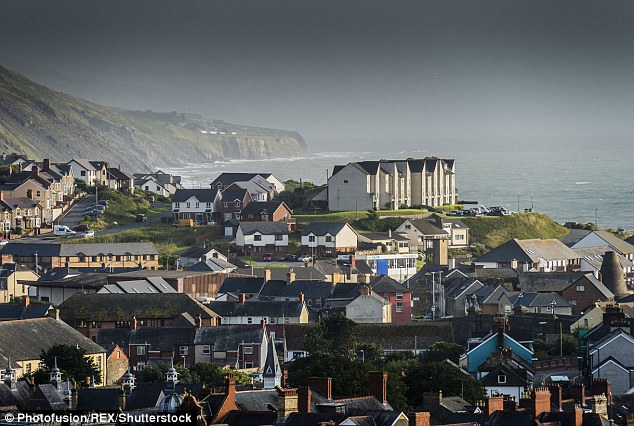 At the cheapest end of the market, just 31 homes were bought for seven figures in Wales and 36 in the North East. Pictured: A general view of Aberystwyth in Wales

A report by the respected Institute for Fiscal Studies earlier this month showed that just one in four middle class people aged between 25 and 34 now owns their own home because prices have risen so much faster than incomes.

Politicians and campaigners have warned that unless the Tories take decisive action to boost home ownership among the young, they face losing an entire generation of voters to rival parties.