Ethnic minority firefighters who ‘were told to stay in back of the truck so their presence wouldn’t hit house prices’ by racist colleagues are awarded £125,000

Five ethnic minority firefighters have won a five-figure settlement after being subjected to racial harassment, it has been claimed.

The firefighters claimed they endured countless forms of racism and two were even told by their colleagues to remain in the fire truck on one occasion due to the area they had entered.

According to court documents reported in The Telegraph, two of the firefighters, Winston Rollock  and Ajmal Khan, were told by staff at Essex County Fire and Rescue Service that their appearance ‘would bring the house prices down’.

Asian firefighter Mr Khan and his black colleague Mr Rollock were among five firefighters, four men and one woman, who claimed they were subject to racist taunts and ‘acts of harassment’.

According to court documents, two of the firefighters Winston Rollock (pictured) and Ajmal Khan claimed they were told by staff to stay in the truck as  their appearance ‘would bring the house prices down’

Essex Fire and Rescue have now offered a settlement in the region of £20-25,000 each of the firefighters.

Mr Khan, who is a Muslim, added that one one occasion colleagues placed bacon and sausages on his plate and called him a ‘P**i’.

While colleague Mr Rollock claimed that ‘even if complaints were made, nothing would be done’.

The settlement comes after an independent review in 2015 found Essex County Fire and Rescue Service of  ‘dangerous and pervasive bullying’ at every level. 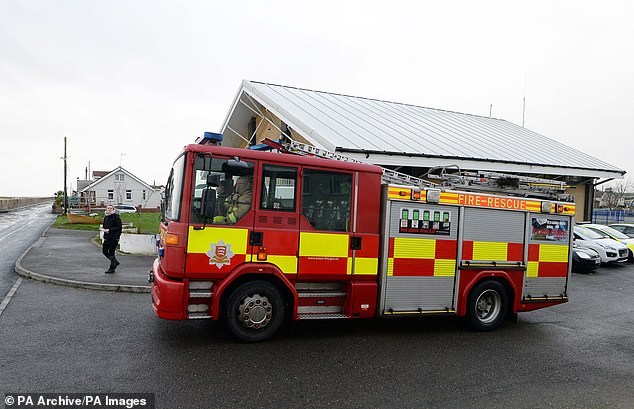 The damning report, commissioned by Essex Fire Authority and authored by Irene Lucas, described the culture existing within the establishment to be ‘toxic’ before adding that staff no longer felt safe at the organisation.

Speaking at the time to The Guardian, Ms Lucas, who had spoken to 500 people connected to the service during her review, had said: ‘The fire service has been beset by a number of serious incidents including the suicides of two serving firefighters, allegations of bullying and intimidation, and ongoing and protracted industrial disputes.

‘The cumulative effect of all these issues, and the long-term absence of the chief fire officer, has contributed to paralysis of the service and made it more challenging for ECFRS to make the necessary organisational changes to become a fire service fit for the 21st century.’