EU says Brexit transition must finish by end of 2020

The EU’s chief Brexit negotiator delighted Eurosceptics yesterday by declaring that Britain’s transition out of the bloc must be completed by the end of 2020.

Michel Barnier ruled out a lengthy transition period, saying Brussels would not allow it to last for more than 21 months after the UK formally leaves in March 2019.

His intervention was welcomed by Eurosceptic MPs worried that it could take years for the UK to finally extricate itself from the EU.

However, Mr Barnier also delivered a stark warning on trade, claiming that the UK could not rely on the EU to help it continue around 750 EU international agreements – including dozens of free trade deals – during the transition period.

He said it would not be ‘logical’ to extend Britain’s effective membership of the EU beyond December 2020 when the current seven-year budget period runs out.

His stance is a blow to the Confederation of British Industry, which called for a three-year transition. Some Treasury officials have even floated the idea of a transition phase lasting as long as five years.

But Eurosceptic Tory MP Peter Bone said: ‘It is good news. If we need an implementation period then it should be as short as possible.

‘The idea of leaving when the budget period ends makes sense and I hope we will hear no more of the idea that we could be locked in for years on end.’

Theresa May has previously said that she favours an ‘implementation period’ lasting for ‘about two years’.

Downing Street yesterday described Mr Barnier’s comments as an ‘opening position’, and made it clear that Mrs May reserved the right to seek a slightly longer transition.

Speaking to MPs, the Prime Minister said: ‘We are about to start the negotiations. Obviously what we have seen today is that position come from the EU. We will be quickly into negotiations about what the transition period should cover.’

Publishing the EU’s negotiating guidelines yesterday, Mr Barnier warned that the UK could not rely on Brussels and the other countries involved to help it ‘roll over’, or continue, the 750 EU international agreements during the transition period. 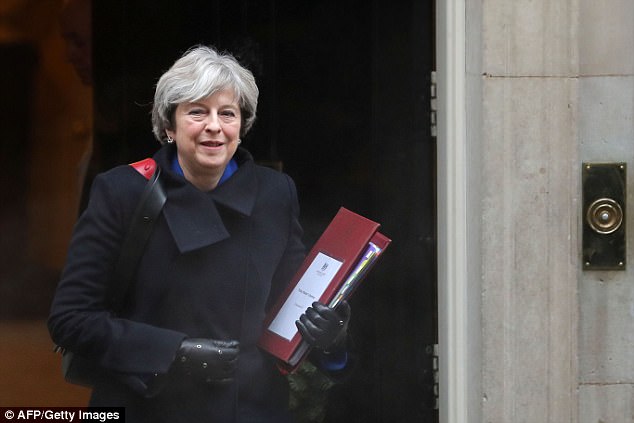 Mr Barnier ruled out a lengthy transition period, capping it at 21 months. Mrs May said she reserved the right to seek a slightly longer transition

He said that Britain should prepare for a huge administrative challenge to renegotiate the wave of deals.

He also indirectly poked fun at Liam Fox, suggesting the Tory minister’s international trade department is not yet ready to undertake the diplomatic blitz which could have a significant economic effect.

‘It will be up to the [European] Council to appraise the feasibility, the value, the need for the UK to be able to continue to benefit during this period from some of these agreements,’ he said.

‘The UK needs to prepare as of now to be able to replicate these agreements. They need to ensure that already now they have the administrative capacity to carry out these negotiations to conclude these agreements.’

Mr Barnier added: ‘It’s always useful to remember that when we talk about red tape here in Brussels, this red tape and bureaucracy works in many areas on behalf of 28 member states. When a country is no longer a member of the EU naturally they need to have that administrative capacity.’

But PM leaves door open to putting back quit date

Britain’s exit from the EU will only be delayed in ‘exceptional circumstances’, Theresa May said yesterday.

The Prime Minister had planned to enshrine the Brexit date in law as March 29, 2019. But she was forced to back down yesterday after pro-Remain Tories threatened to inflict a second Commons defeat on the flagship EU Withdrawal Bill.

Rebel ringleader Dominic Grieve had warned that there were ‘no circumstances’ in which he and other rebel MPs would back an inflexible exit date.

The Government backed a ‘compromise’ put forward by former minister Sir Oliver Letwin, which will keep the date in legislation but allow ministers flexibility to change it.

Mrs May was challenged over the climbdown by Eurosceptic MPs. Julian Lewis asked her for assurances that the power to delay Brexit ‘will be invoked only in extremely exceptional circumstances, if at all, and only for a very short period’.

Mrs May told the Commons: ‘We are very clear that we will be leaving the EU on 29 March 2019 at 11pm. If that power were to be used, it would be only in extremely exceptional circumstances and for the shortest possible time. We are not talking about extensions.’

The EU’s negotiating guidelines also suggest that Gibraltar could be excluded from any transition deal unless Spain gives its approval.

But Mrs May made clear she would never accept a Spanish veto on Gibraltar’s status, telling MPs: ‘We are not going to exclude Gibraltar from our negotiations from either the implementation period or the future agreement.’ Mr Barnier warned the UK that it will not be allowed to negotiate ‘transition a la carte’.

Instead, he said that the UK must accept ‘all the rules and policies of the EU must continue to be applied’.

He added: ‘The transition period is useful and will enable Britain to prepare themselves for the kind of challenges that they will have to face… and to prepare also for the complications of the new relationship.’

But Mr Barnier’s hard-line position, which has angered Brexiteers, was contradicted as the document revealed that the UK would be allowed to negotiate a ‘specific’ deal on fishing rights during the two-year period.

The outline for yesterday’s blueprint spelled out how the UK will lose membership of EU institutions such as the European Council and Commission during the transition period, when it will have to continue to obey EU rules.

But in an effort to ease concerns that the UK will have to blindly follow Brussels rules, the EU said that Britain will be allowed to watch over EU meetings as ‘observers’ despite having no official vote.