Brussels warned yesterday that it will block Theresa May’s call for a Brexit transition deal unless the UK caves in during negotiations.

In a fiery opening to the latest round of talks, the EU threatened to thwart the arrangement unless Britain first agrees to pay a huge ‘divorce’ bill and accept Brussels’ rules during this time.

The Prime Minister announced plans for Britain to maintain its relationship with the EU for an ‘implementation’ period lasting several years after Brexit during a keynote speech last week aimed at breaking the deadlock in talks.

Her intervention was tentatively welcomed by Brussels, but the EU’s chief Brexit negotiator Michel Barnier yesterday told the UK it must settle its ‘debt’ first before any transition deal will be discussed.

Warning that Brussels could still veto a deal after the financial settlement is agreed, Mr Barnier said: ‘The EU has to decide on whether to have a transitional period and whether it is in its interest.

He said during any transition the UK ‘would have to continue with things such as the budget, supervision, judicial supervision and controls of EU rules and regulations’.

Mrs May’s desire for an ‘implementation’ period has provoked rows between Cabinet ministers and prompted concern from Brexiteers that it will effectively mean EU free movement into the UK continues until at least 2021. 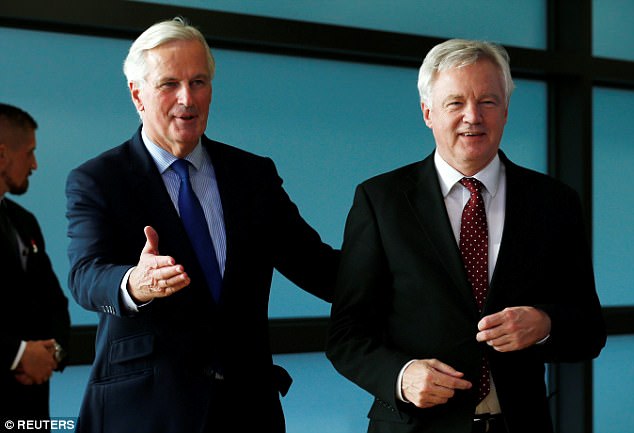 The deep divide between the EU and Britain over how to agree the ‘divorce’ bill, seen as the biggest threat to negotiations’ success, was revealed as the fourth round of Brexit talks got under way in Brussels yesterday.

Brexit Secretary David Davis rejected Mr Barnier’s arguments and said the UK would only discuss paying money in the context of a future deal with the EU.

In a direct warning to Brussels amid fears the EU is stalling talks, Mr Davis also warned Mr Barnier there were ‘no excuses for standing in the way of progress’.

‘The UK will honour commitments we have made during the period of our membership,’ he said.

‘But it’s obvious that reaching a conclusion on this issue can only be done in the context of and in accordance with our new deep and special partnership with the EU.’ 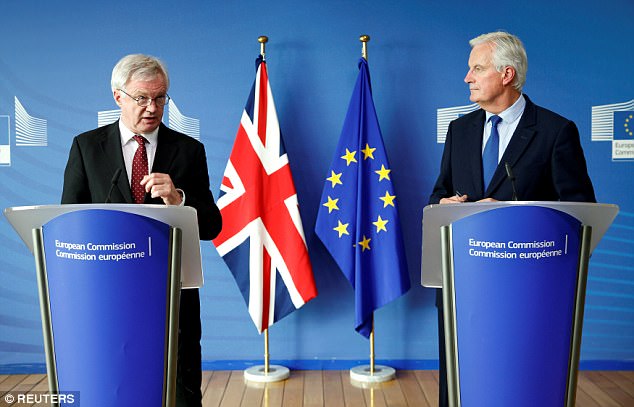 Mr Barnier (right) hinted that a breakthrough could be reached this week. He is pictured with Brexit Secretary David Davis

Reiterating Mrs May’s position during her speech in Florence last Friday, Mr Davis said EU countries should not ‘worry that they will need to pay more or receive less over the remainder of the current budget’.

He also praised the PM’s proposals and said the UK ‘is absolutely committed to work through the detail’.

Brussels has demanded that the UK pay a ‘divorce’ settlement of up to £90billion.

Mrs May confirmed last week that she is willing to continue the UK’s payments into the EU’s budget for two years after Brexit – estimated to come to about £17.5 billion.

Mr Barnier hinted that a breakthrough could be reached this week, saying the resumed talks could unlock ‘a moment of clarity’ over the rights of EU citizens living in the UK, the Northern Ireland border and the ‘divorce’ bill.

EU leaders will first have to decide whether the UK has made ‘sufficient progress’ on these issues before agreeing to launch talks on a trade deal.