The EU has proposed a new digital tax targeting the likes of Google, Amazon and the under-fire Facebook.

The special tax is the latest measure by the 28-nation European Union to rein in Silicon Valley giants and could further embitter the bad-tempered trade row pitting the EU against US President Donald Trump.

European Union officials unveiled Wednesday proposals for the levy which could heap more problems on Mark Zuckerberg’s Facebook after revelations over misused data of 50 million users shocked the world.

‘This current legal vacuum is creating a serious shortfall in the public revenue of our member states,’ France’s Moscovici told a press conference in Brussels.

‘We estimate this could generate at least five billion euros a year if the tax is imposed at three percent.’

Moscovici insisted it was ‘not an anti-GAFA tax nor an anti-US tax’, referring to the popular acronym for Google, Apple, Facebook and Amazon.

The transatlantic blow has been championed by French President Emmanuel Macron and will be discussed over dinner at an EU leaders summit on Thursday. 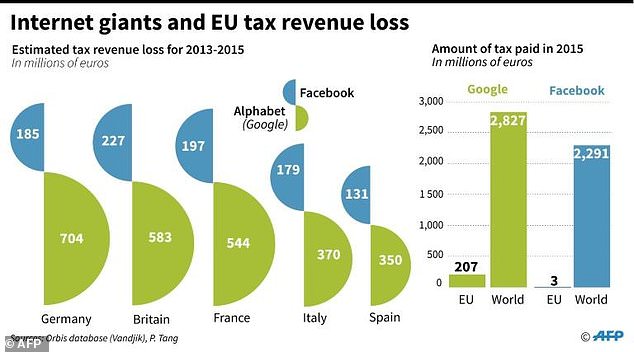 The unprecedented tech tax follows major anti-trust decisions by the EU that have cost Apple and Google billions and also caught out Amazon.

The EU tax would affect revenue from digital advertising, paid subscriptions and the selling of personal data.

That file has come to the forefront following revelations that a firm working for Trump’s US presidential campaign harvested data on 50 million users of Facebook.

The EU tax plan will target mainly US companies with worldwide annual turnover above €750million ($924 million), such as Facebook, Google, Twitter, Airbnb and Uber.

Spared are smaller European start-ups that struggle to compete with them. 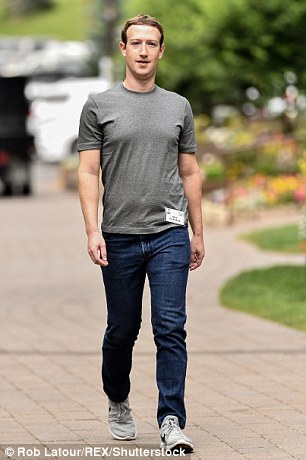 Brussels is seeking to choke tax-avoidance strategies used by the tech giants that, although legal, deprive EU governments of billions of euros in revenue.

Under EU law, firms like Google and Facebook can choose to book their income in any member state, prompting them to pick low-tax nations like Ireland, the Netherlands or Luxembourg.

As an example, Amazon operates across the bloc, but is headquartered in tiny Luxembourg, which has offered sweetheart tax deals that have allowed the firm to pay low effective taxes.

These numbers are, however, disputed by the tech giants, which have criticised the tax as a ‘populist and flawed proposal’.

‘At the very least, the tax is prone to be interpreted by the US as a hostile act in the already begun trade war,’ wrote tax specialist Johannes Becker in a blog post tweeted by the Computer & Communications Industry Association.

Under the EU plan, revenue from the digital tax would be fairly distributed to where the companies actually operate, according to the level of activity in those countries and not the level of booked profit.

‘The US firmly opposes proposals by any country to single out digital companies,’ Mnuchin said.

The EU’s Moscovici sought to reassure that ‘these proposals are neither a response to a French request nor a response against the United States’.

The EU has been on tenterhooks amid fears of a global trade war since Trump this month suddenly announced steep duties of 25 percent on steel and 10 percent on aluminium.

The EU’s trade commissioner Cecilia Malmstroem is in Washington this week trying to get the bloc exempted.

EU President Donald Tusk on Tuesday said the bloc’s response would be ‘responsible and reasonable’.