SCOUTING REPORT: England must beware of Germany’s wide-men with Joachim Low getting the best out of Joshua Kimmich and Robin Gosens… but a lack of pace at the back can be exploited by Raheem Sterling and Co

They need no introduction. Germany lie in wait for England in a tie that provokes painful memories. The shootout defeats, the ghost goal, the crushing disappointments.

Perhaps this time it will be different. Gareth Southgate hopes so. England will not be facing a nation completely sure of itself.

The win over Portugal heightened enthusiasm but Wednesday night’s draw with Hungary was far from impressive, and the Euros campaign comes on the back of three wretched years for coach Joachim Low, who will leave at the end of this tournament.

Low’s side attacked Portugal differently from how they took on France. They were more fluid and higher up the pitch, with Serge Gnabry allowed to roam and Kai Havertz floating into dangerous areas like he often does for Chelsea.

But Germany’s wide men changed that game. Many wanted Joshua Kimmich to operate centrally, yet Low has stuck with him on the right, while the performance of Robin Gosens during Saturday’s 4-2 win was a major fillip.

Gosens was involved in all four goals — scoring one while another was disallowed for a tight offside — and cut Nelson Semedo to shreds on the left. Germany widened the pitch to get the best out of Kimmich and Gosens, whose energy gave them fresh options after Low’s side had been too narrow against the French. 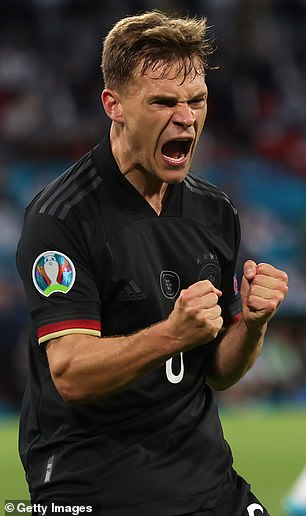 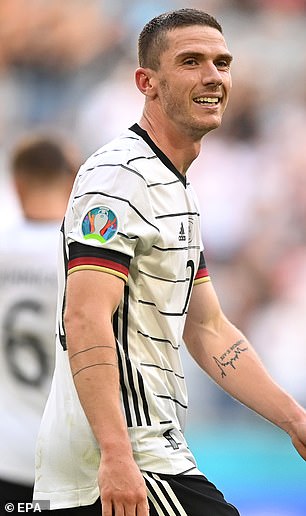 England will have studied the France match and should feel it offers them encouragement if they can get a handle on the game early. Low could not find a way of penetrating Didier Deschamps’ low block despite enjoying two-thirds of the ball.

That, coupled with Portugal’s first goal, represents a blueprint. Cristiano Ronaldo scored a tap-in at the end of a counter-attack that caught Germany cold. Mats Hummels’ lack of pace at the back must be something England try to exploit. 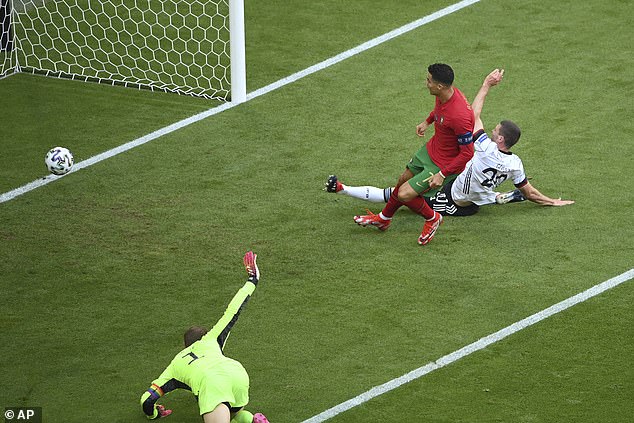 Mats Hummels’ lack of pace was exposed when Ronaldo, who caught him cold on the counter

Low has stuck with 3-4-2-1. Matthias Ginter and Antonio Rudiger line up either side of Mats Hummels to protect him and there is a much reliance on the wing backs. Leon Goretzka has drive from midfield.

The front three operate on a more rotational basis and, if Thomas Muller does not play, Low has the likes of Goretzka, Leroy Sane and Timo Werner. Toni Kroos and Ilkay Gundogan, two classy midfielders, present a stable base. 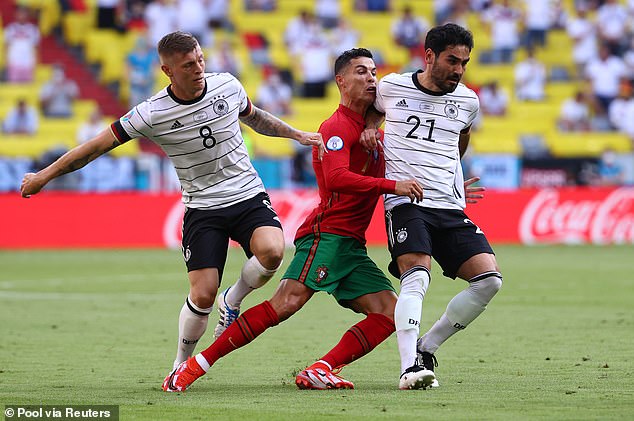 Muller and Hummels were jettisoned in 2019 by Low, who tried to move in a new direction after the World Cup humiliation.

Results faltered, a 6-0 Nations League defeat in Spain being the nadir, and Low swallowed his pride and recalled both men. They have added leadership. 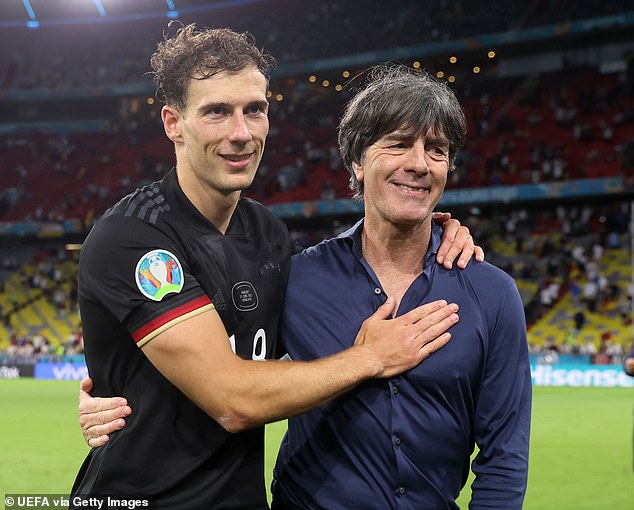 Southgate must be tempted to pick a back three, with wing backs to push Kimmich and Gosens into reverse. Then press Kroos and Gundogan in the hope of turning Germany over in key areas.

England’s need for pace and urgency to unsettle the opposition will be far greater than it was in the group games. 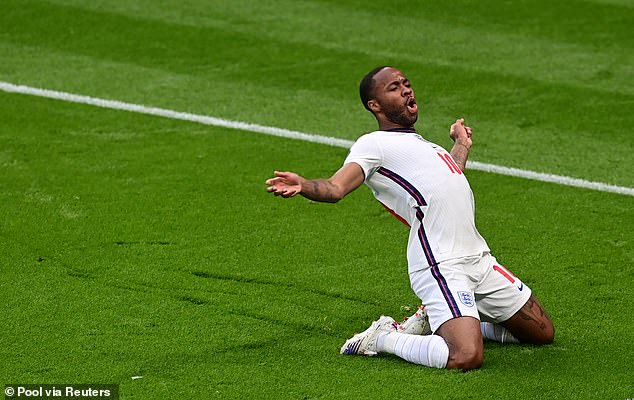 England vs Germany head to head at major tournament