A tearful Roberto Mancini praised his Italy side for ‘dominating’ England in the final of Euro 2020 after falling behind early on.

The Azzurri were stunned by Luke Shaw’s second minute opener but levelled in the second half and went on to win on penalties on Sunday night to break English hearts.

Mancini’s team fought back to seize control impressively and they had the majority of possession.

The Italy boss was in tears after the shootout win and told RAI Sport: ‘They did well. We conceded the goal straight away and struggled, but then dominated from there on in.

‘The lads are marvellous, I don’t know what more to say. It’s important for all the people and all the fans.

‘We are happy that we played well when winning the game. I hope the supporters are celebrating right now.’ 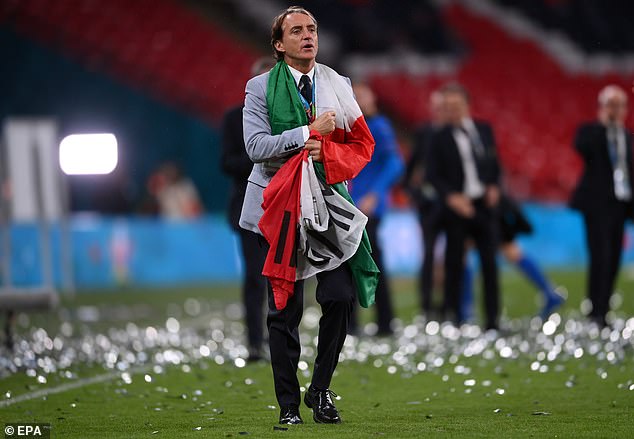 Gareth Southgate’s men were in full control for the first 45 minutes and limited Italy to shots from long range.

But Italy began to dictate play in the second period and bundled in an equaliser after chaos in the box following a corner.

While the Italians were in control of the ball for large parts of the game, they struggled to create clear cut chances and neither team could find a winner in extra time.

But Mancini had Gianluigi Donnarumma to rely on in goal and the towering AC Milan stopper saved from Bukayo Saka and Jadon Sancho while Marcus Rashford hit the post.