Brussels yesterday launched an investigation into a scheme hatched by George Osborne that allows multinational companies to get around tax-avoidance measures.

EU officials said the probe would examine whether rules signed off by the former Chancellor let firms avoid paying tens of millions of pounds in tax.

Experts however questioned the motivation behind the ‘farcical’ investigation and suggested that it was an ‘anti-Brexit attack’.

The European Commission investigation is the latest move aimed at cracking down on sweetheart deals after huge fines were levied against companies including Apple, Google and Starbucks.

It came after revelations that the amount of tax avoided by multinational companies in the UK had risen by almost 50 per cent to £5.8billion last year.

‘Anti-tax avoidance rules play an important role to achieve this goal. But rules targeting tax avoidance cannot go against their purpose and treat some companies better than others.

The Brussels chief, who has gained notoriety for her pursuit of tax-avoiding companies, said they would carefully scrutinise the UK rules during a lengthy investigation.

While the Government yesterday agreed to comply with the costly probe, questions will be raised about how a decision can be enforced if it is not concluded before Brexit.

It will also raise suspicions about whether Brussels is trying to shine a light on the UK’s tax regime after claims that the UK may transform itself into a tax haven after Brexit to win business.

Brussels yesterday said the rules, introduced in 2013, could fall foul of EU law because they allow multinational companies with a base in the UK to potentially pay less tax than smaller firms.

While acknowledging the UK maintains the right to draft its own regime, the Commission said it wanted to ensure that member states do not give some companies ‘better tax treatment than others’.

A decision finding that the UK had broken competition rules would likely see the companies asked to repay the back taxes to HMRC.

But the European Commission yesterday refused to say how much tax may be recouped.

Forecasts released at the time of the tax overhaul however said that a number of changes – including the exemption under investigation – would cost the Exchequer £805million by 2016. 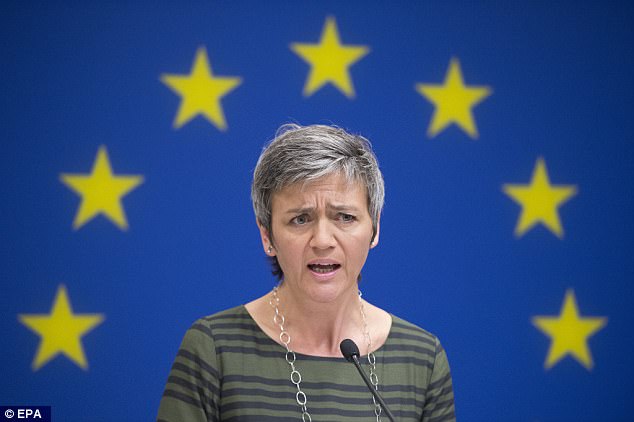 Downing Street yesterday said the scheme was compliant with EU law, only for Labour to claim that the rules were a ‘tax dodge’.

Shadow chancellor John McDonnell said: ‘Conservative-led governments have made it easier for tax avoiders to duck their obligations to society and not pay their fair share of tax.’

The changes made by Mr Osborne allow companies to avoid paying UK tax on interest payments made to its offshore subsidiary from another group company located abroad.

The exemption applied to ‘controlled foreign company’ rules originally drawn up to prevent large companies from shifting their money around the world to get around tax payments.

Dan Neidle, from the law firm Clifford Chance, told the Financial Times: ‘To find its new rules subject to attack from another EU institution will probably strike HMRC as farcical.

‘This kind of thing makes Eurosceptics of the best of us.’

Zoe Wyatt, of Milestone International Tax Partners, said: ‘It is quite possible that the cost of the investigation will far outweigh any additional tax that may have to be paid to HMRC.’

She said the move is an ‘anti-Brexit attack’ that proves it is in the UK’s interest to ‘leave the union as soon as possible’.

It comes after a number of high-profile cases, including last year’s demand for Apple to pay £11.5billion in back taxes to Ireland.

Amazon was also ordered to pay £222million to Luxembourg by the European Commission earlier this month.