The Saharan bubble heatwave scorching Europe has claimed its first victims after three people died in France from suspected cold shock after diving into the sea from a hot beach.

A 70-year-old man suffered a cardiac arrest on Monday at Marseillan Plage, near Montpellier – the day the heatwave began – before a 62-year-old woman and a 75-year-old man died on Tuesday in the same region, it was revealed today.

A bubble of hot air swept up from Africa is roasting Europe in an early-June heatwave that has seen threat-to-life warnings issued across France, Germany and northern Spain.

Forecasters have compared conditions to the 2003 heatwave which occurred around the same time of year and killed an estimated 70,000 people across the continent. Early season heatwaves are considered more dangerous because people’s bodies have not had time to adjust to summer conditions.

June records are set to be broken this week in Austria, Belgium, the Czech Republic, Denmark, France, Germany, Luxembourg, the Netherlands and Switzerland.

In Britain, temperatures are expected to reach 80F (27C) on Wednesday, before climbing until Saturday, with highs of 88F (31C) possible.

A plume of Saharan air is bringing scorching June temperatures across Europe, which are set to climb even further on Wednesday before peaking in some parts on Thursday and Friday 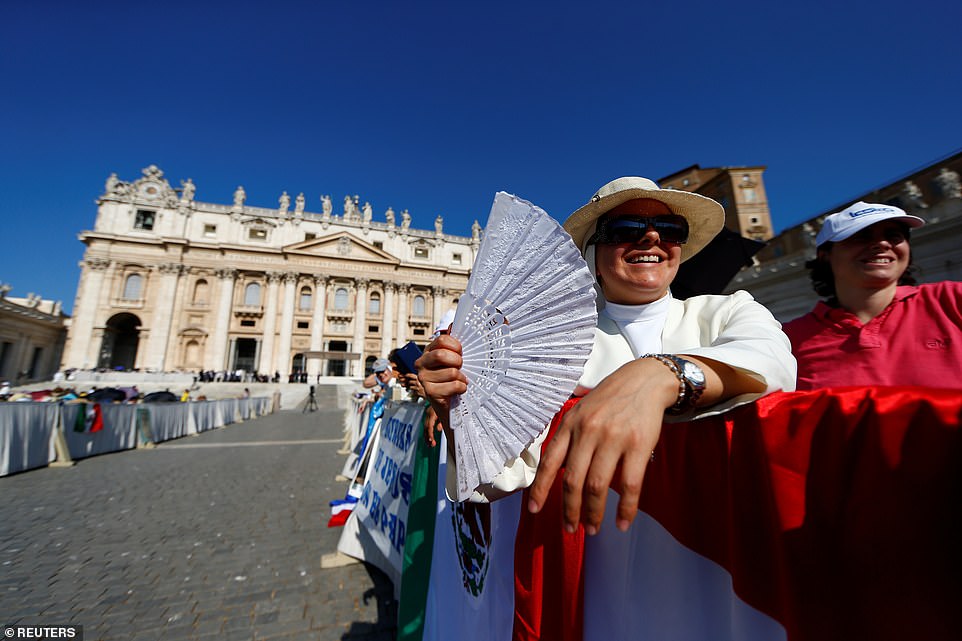 People brave heat to attend the general audience in St. Peter’s Square at the Vatican on Wednesday 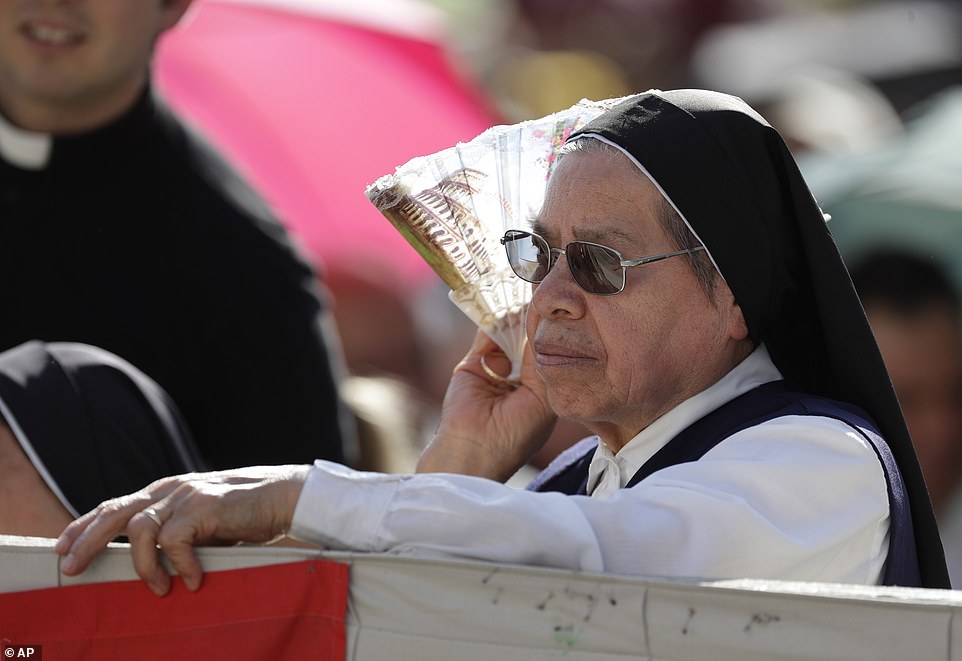 A nun uses a fan to shelter from the sun as she waits for the start of Pope Francis’ general audience in St. Peter’s Square 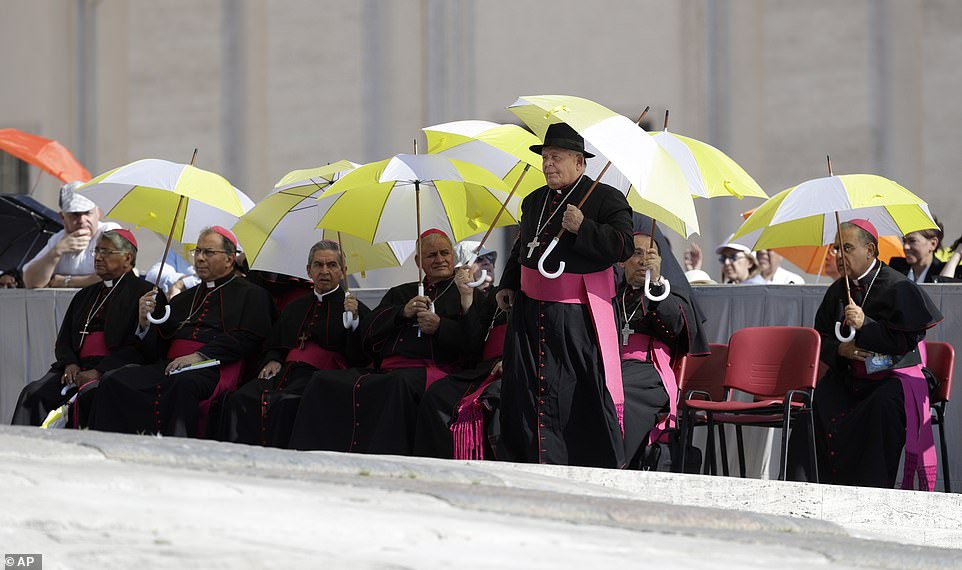 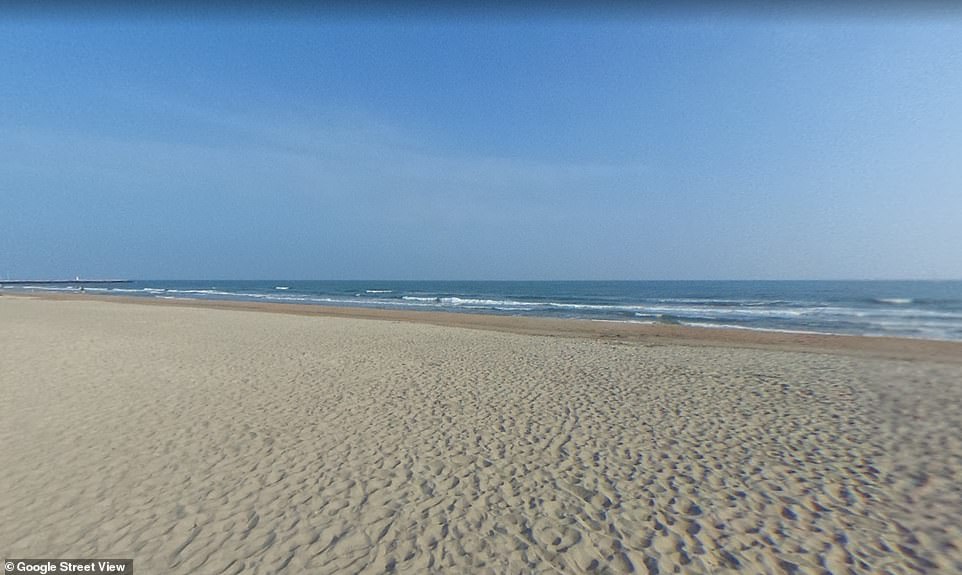 A 70-year-old man died on Marseillan Plage, near Montpellier (pictured) on Monday, while two more people – a 62-year-old woman and 75-year-old man – died in the same region Tuesday 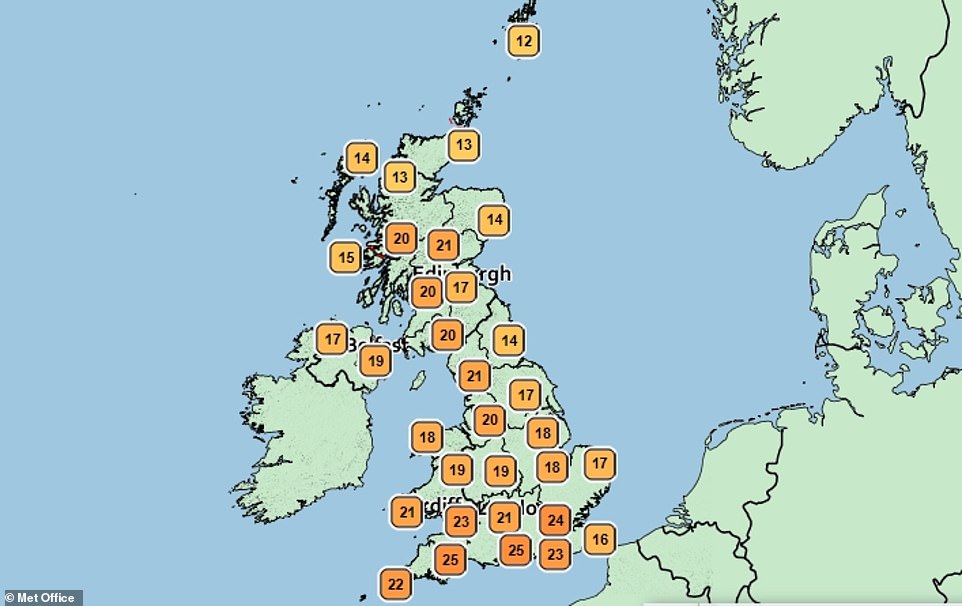 Temperatures in Britain are set to top 77F (25C) Wednesday, with some forecasts predicting highs of 80F (27C) 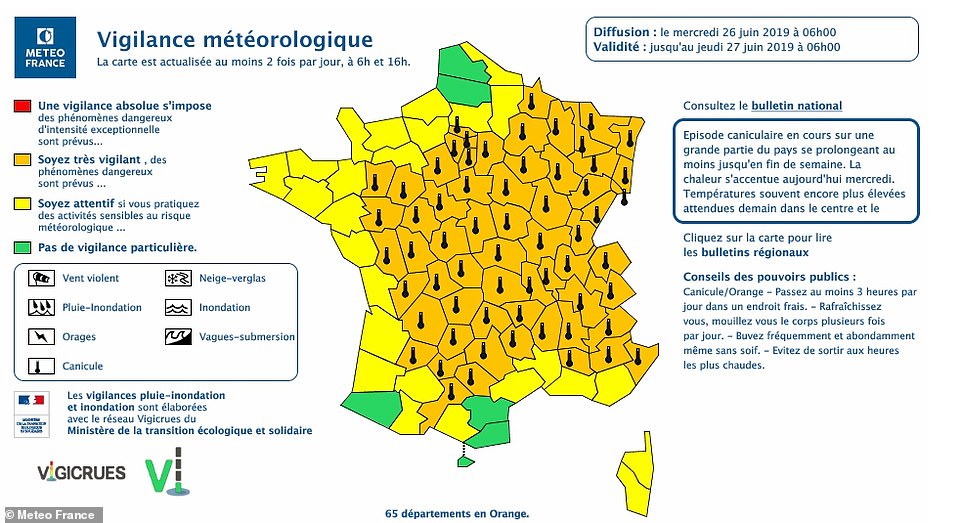 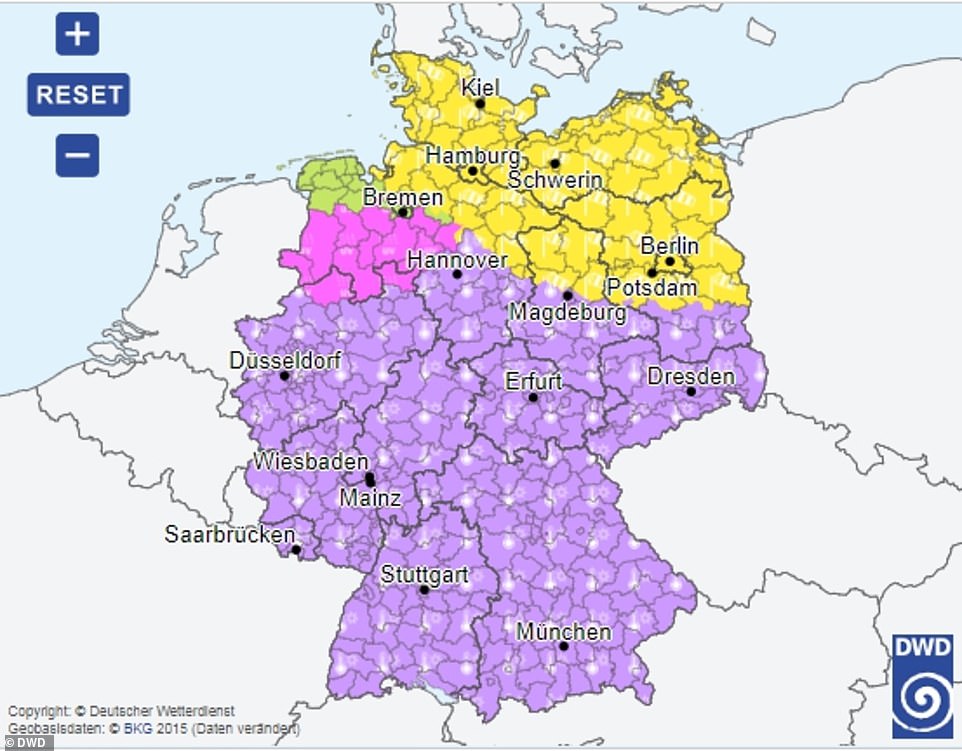 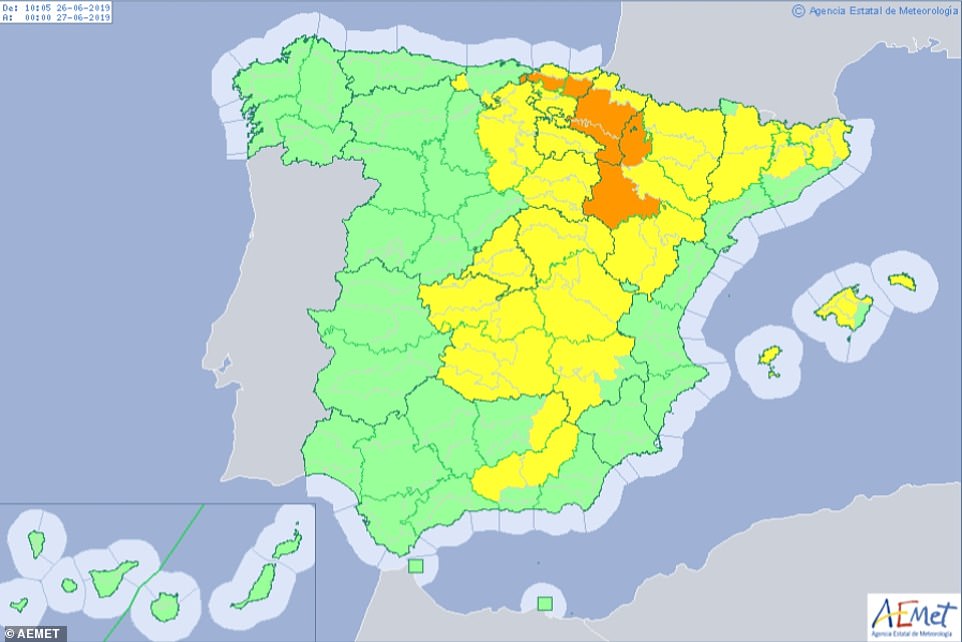 Basque country in Spain was also placed under an orange heat warning, meaning danger to life, with other areas under a less-severe yellow warning

In Trier, Germany, it reached 99F (37C) on Tuesday, with slightly cooler temperatures of 95F (35C) expected in Berlin today. Overnight temperatures peaked at 79F (26C), bringing no respite from the heat.

The south of France, where the three people died, has been among the regions worst affected by the European heatwave, with temperatures topping 92F (33C) on Tuesday. That will climb again to 99F (37C) today.

Doctors in Rome have warned of possible health hazards caused by overflowing rubbish bins in city streets as the Italian capital struggles with a renewed waste emergency aggravated by the summer heat.

Waste disposal is a decades-long problem for the Eternal City. Rome was left with no major site to treat the 1.7 million metric tons it produces every year when the Malagrotta landfill was closed in 2013.

What is cold shock?

Cold shock, otherwise known as hydrocution, occurs when the human body is subjected to a sudden decrease in temperature.

It typically occurs when someone falls through ice into very cold water, but can be triggered when a body goes from a very hot place – like a beach – to cold water such as the sea.

While this is not typically fatal, it can cause lethal cardiac arrests in people with heart conditions.

Medics advise entering water slowly during heatwaves to avoid it.

Successive mayors from different parties have all proved incapable of solving the problems, which have re-emerged dramatically since Virginia Raggi of the populist 5-Star Movement took the helm three years ago.

Her administration is facing frustration and anger from tourists and Romans over the piles of rubbish that threaten health and tarnish the city’s image.

School exams due to take place later in the week in France have been cancelled to keep students safe, while officials at the women’s World Cup – which is taking place in France – are considering letting players take water breaks during games to keep cool.

French President Emmanuel Macron said yesterday that vigilance was the watchword for the week.

‘As you know, at times like these, sick people, pregnant women, infants and elderly people are the most vulnerable,’ he said.

‘So we must be vigilant with them and have prevention measures in place in order to intervene as quickly as possible.’

French health minister Agnes Buzyn insisted that authorities ‘are not scaremongering’ over the heat, which has been compared to the 2003 heatwave which occurred around the same time of year.

Early summer heatwaves are especially dangerous because people’s bodies have not adjusted to seasonal norms, making them more deadly than heatwaves that occur in July or August. 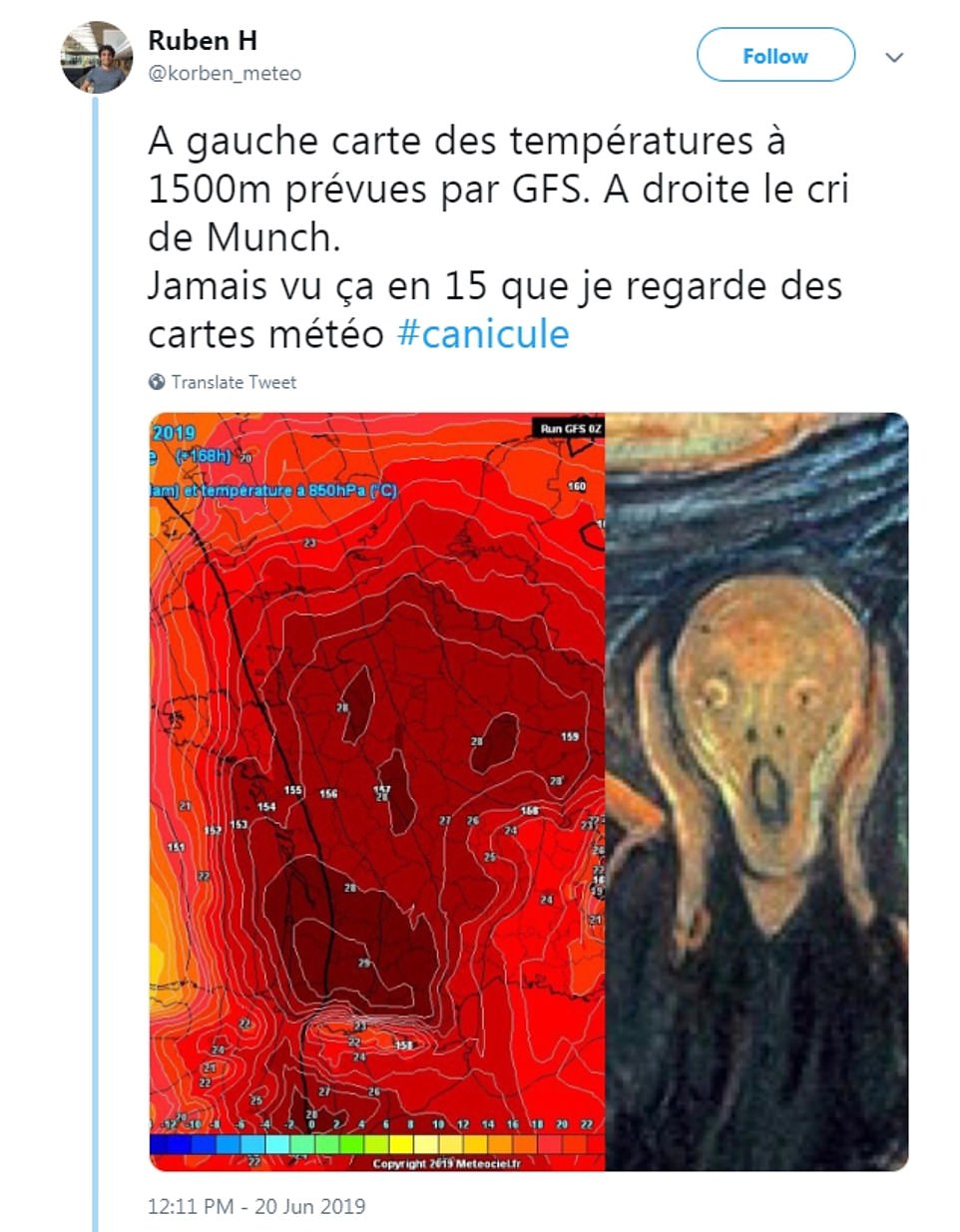 French forecaster Ruben Hallali joked that a heat map of Spain this week looked like Edward Munch’s The Scream in a tweet which has been widely-shared this week. It is not clear when the forecast covers 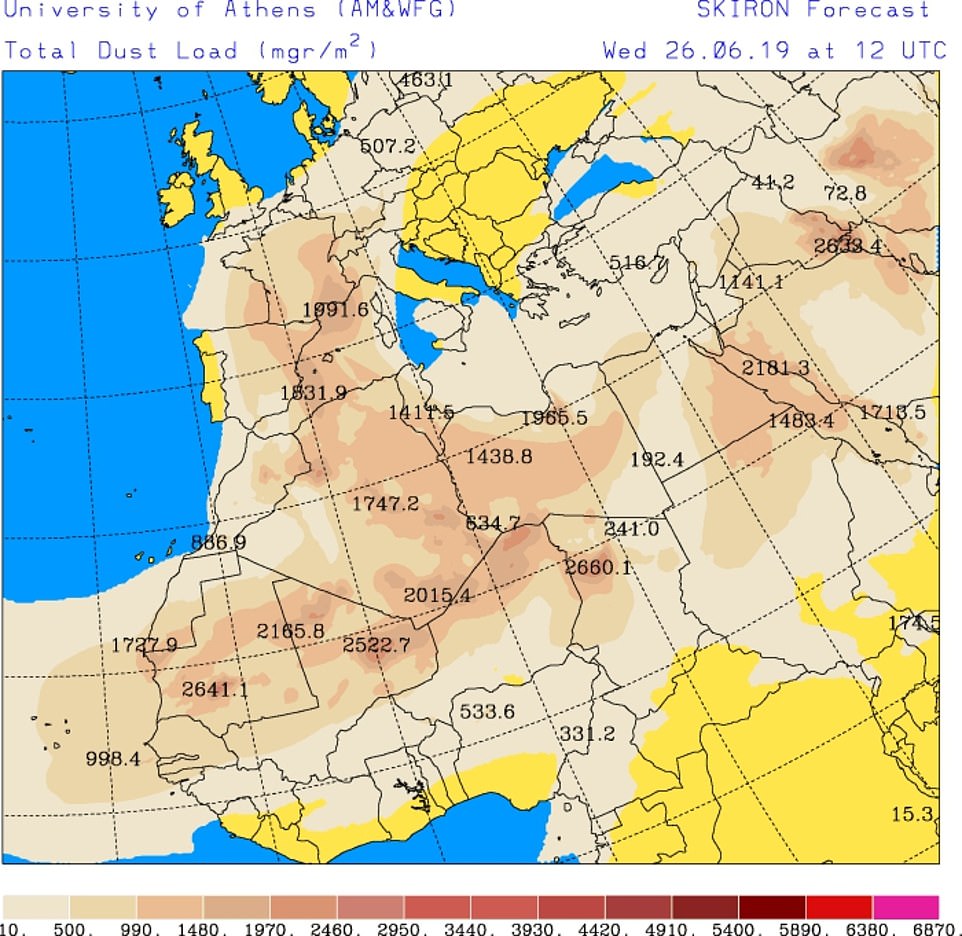 The Saharan plume is also pulling up large amounts of dust which are due to make air pollution worse across Europe (pictured, the pollution forecast for Wednesday) 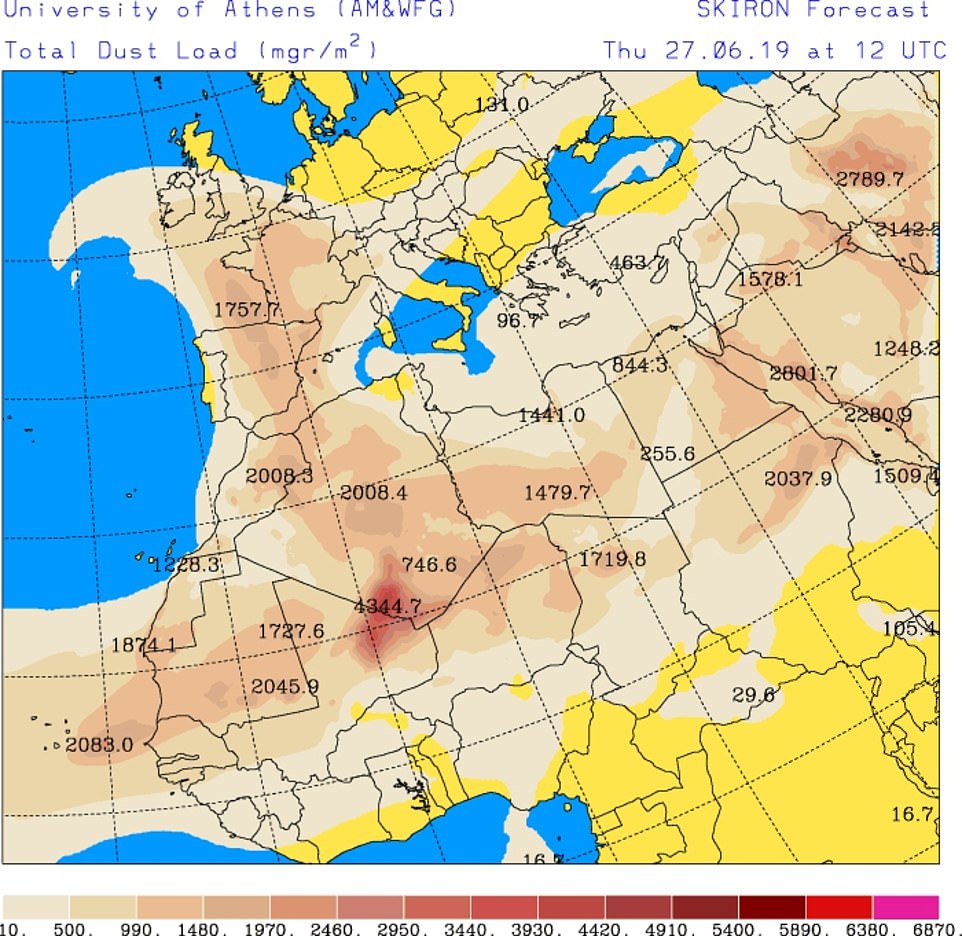 Concentrations of PM2.5 particles – considered the most dangerous because they are very small and so are drawn deep into the lungs and linger for a long time – are forecast to be high this week (pictured, forecast for Thursday) 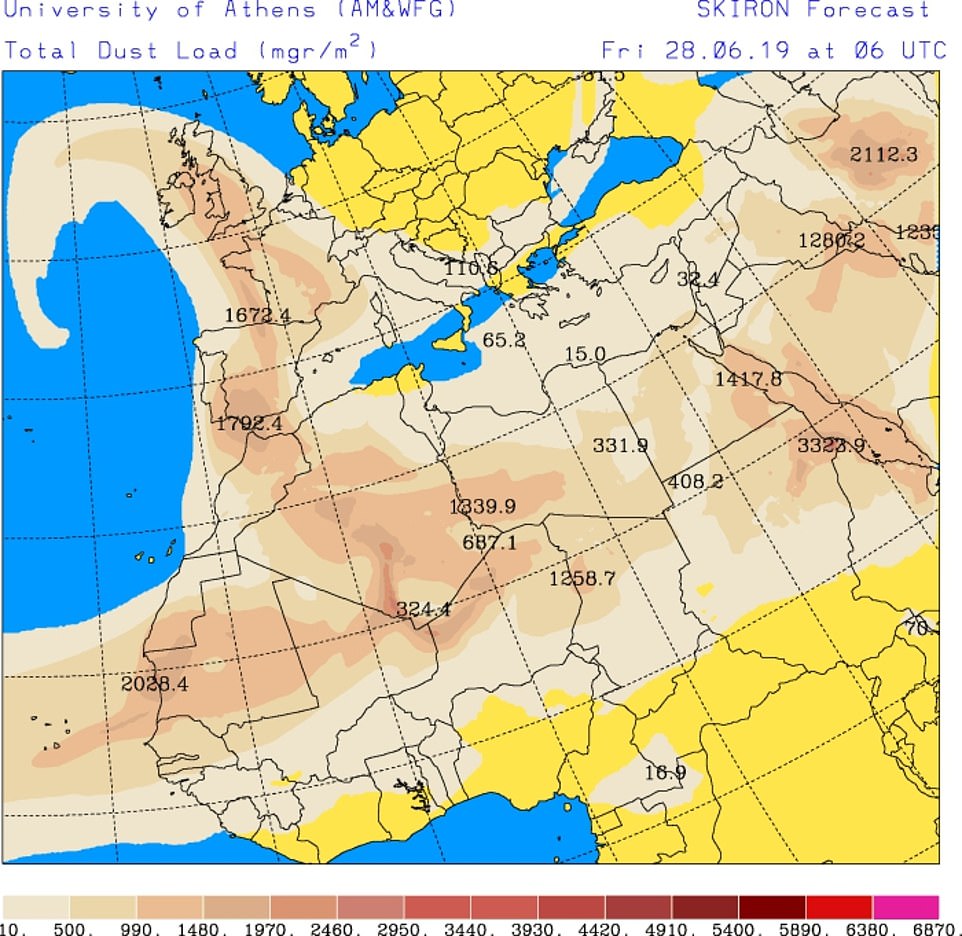 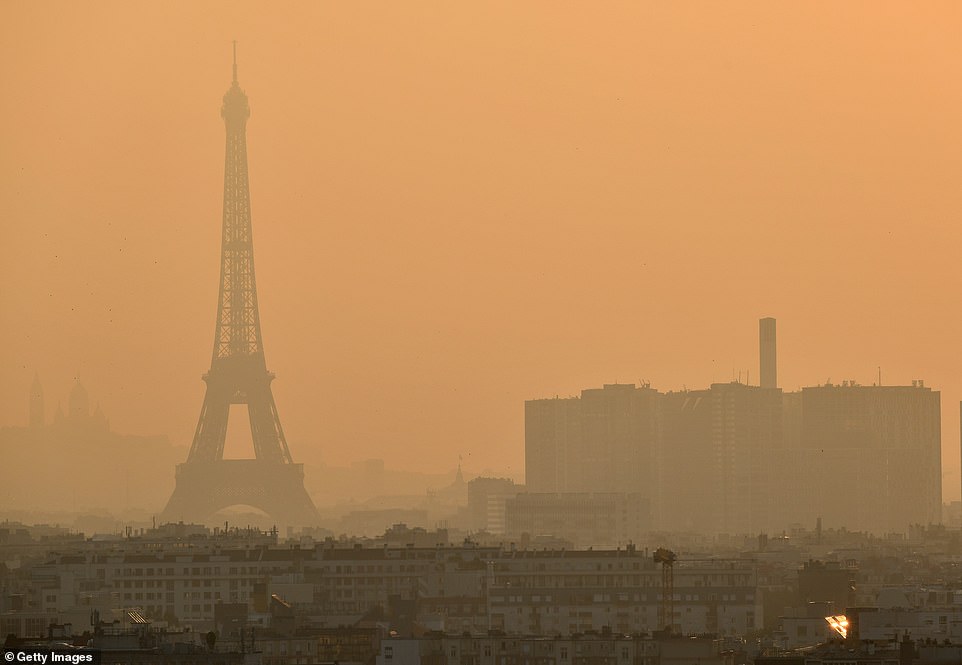 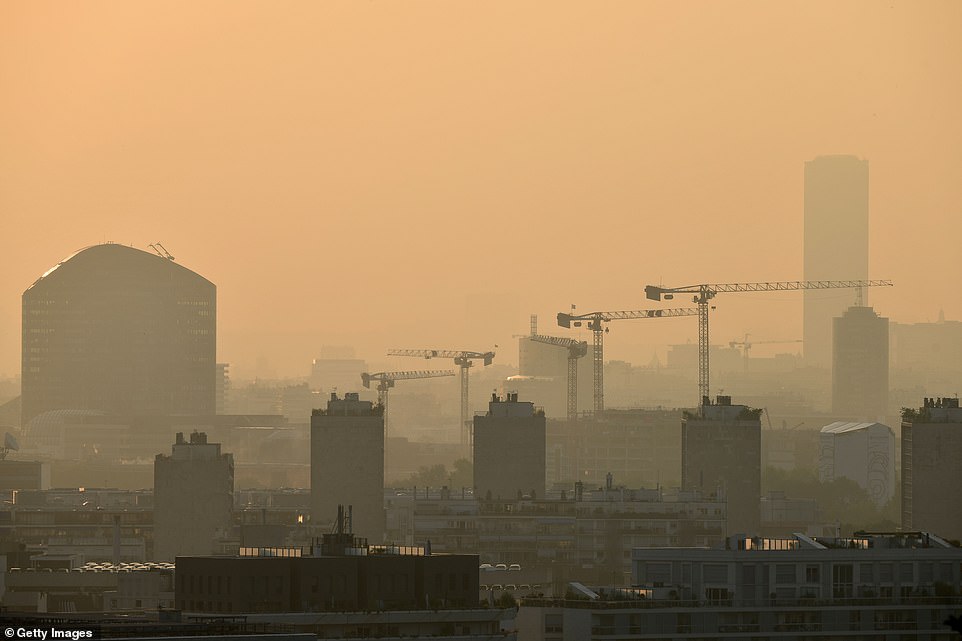 The Montparnasse Tower covered by high levels of air pollution as seen from Meudon in Paris, France, on Wednesday 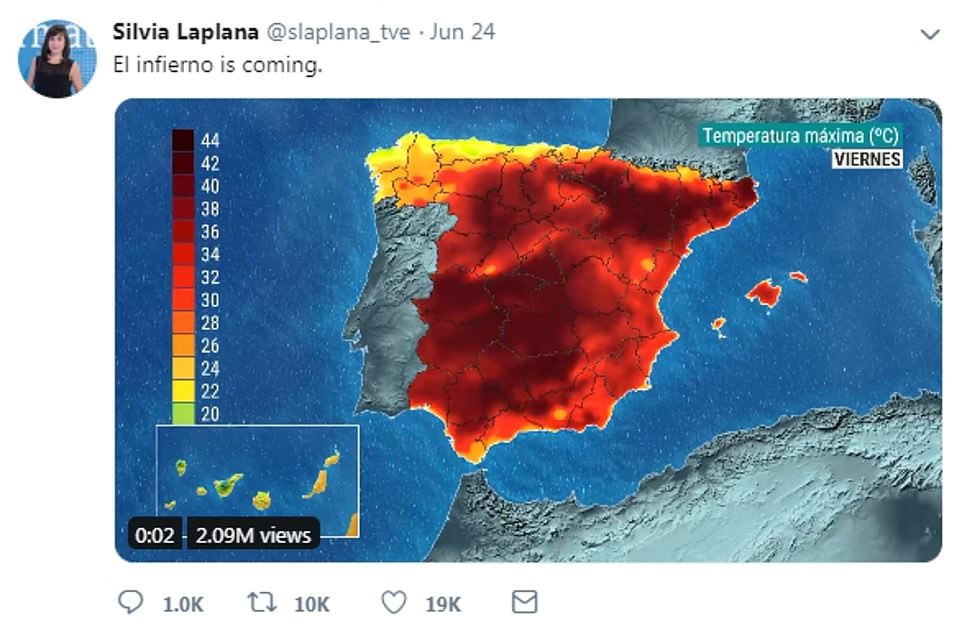 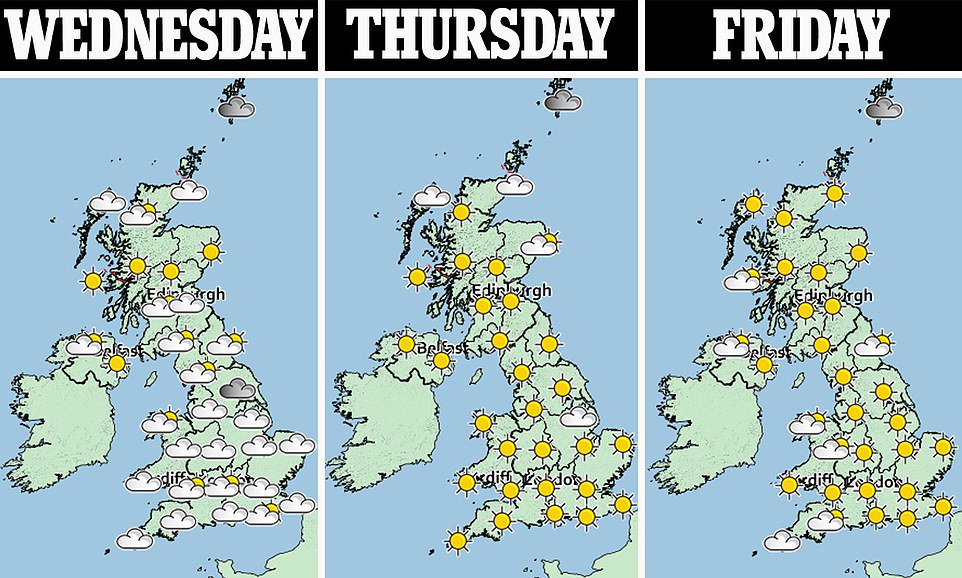 England: Three day weather forecast shows a drastic improvement from the rain and thunder storms we have been experiencing is to come on Thursday

Britain is also set to swelter in temperatures above 86F (30C) following the past two days of widespread downpours and flooding.

Why are temperatures so high and conditions so dangerous?

The heatwave sweeping Europe is being caused by a 2,000-mile wide plume of hot air dubbed the ‘Saharan bubble’ blown in from North Africa by an unusually strong jet stream.

Early summer heatwaves are especially dangerous because people’s bodies have not adjusted to seasonal norms, making them more deadly than heatwaves that occur in July or August.

Parts of Europe, including north-eastern Germany are also at high risk for forest fires.

Meanwhile, powerful winds from the south are also bringing with them a high concentration of small particles PM2.5 which stay in the air for a long time because they are so light.

These fine particles can come from various sources including the likes of power plants, cars, airplanes, forest fires and dust storms.

Fine particles tend to stay longer in the air than heavier particles, increasing the chances of humans and animals inhaling them.

Spanish national forecaster AEMET has predicted temperatures of 104F (40C) in Toledo on Wednesday, climbing to 108F on Thursday and Friday.

In Austria, Vienna’s famous horses were taken off the streets Tuesday amid concerns they could overheat.

Stefan Rahmstorf, of the Potsdam Institute for Climate Impact Research, said ‘monthly heat records all over the globe occur five times as often today as they would in a stable climate’.

Officials across Europe have released guidelines for surviving the scorching weather and hospitals are on high-alert for a surge in admissions related to dehydration, heat-stroke and other weather-related conditions.

In Paris, officials pledged to open ‘cool rooms’ inside public buildings, set up temporary water fountains and leave the city’s parks and gardens unlocked and accessible at night.

City workers would also distribute water to the homeless and install fans in schools and nurseries.

In Germany, rescue services urged people to look out for young children, the elderly and those with compromised immune systems who are at particular risk in high temperatures.

Authorities in Saxony-Anhalt, west of Berlin, imposed 60mph speed limits on the usually limit-free autobahns amid fears the heat could cause the road surface to disintegrate and shred car tyres, as it did in 2015. 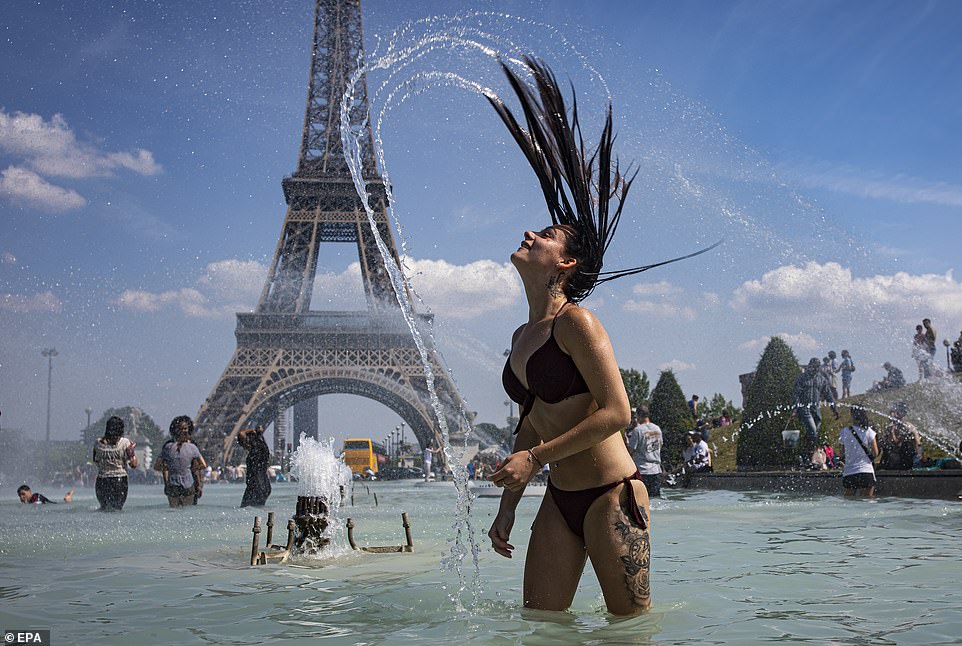 Cooling off: A woman escapes from the heat in a fountain just across the river from the Eiffel Tower in Paris – where temperatures may feel as high as 117F (47C) 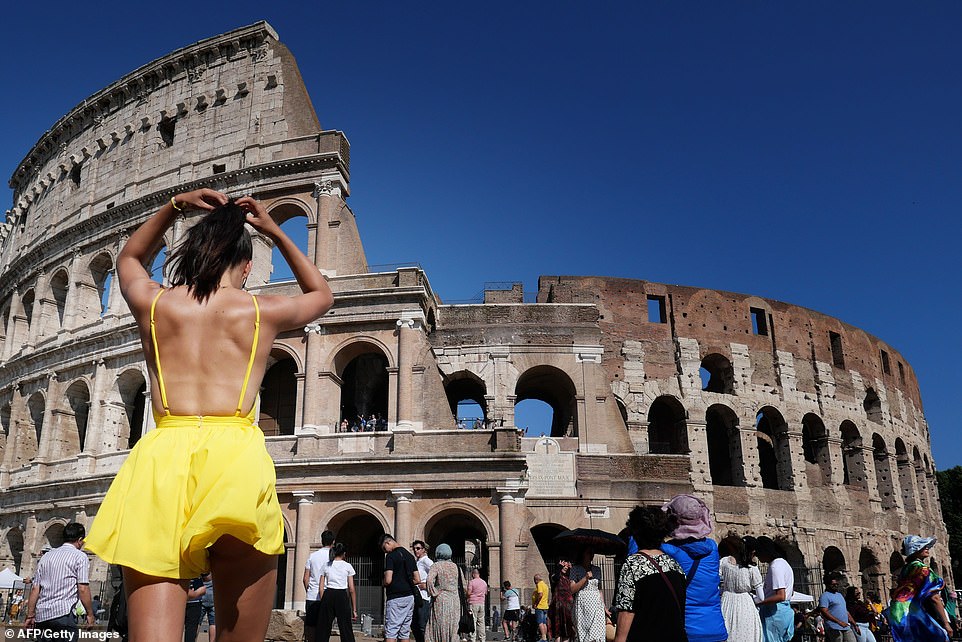 A woman adjusts her hair while walking under a cloudless sky next to the Colosseum in Rome, where temperatures could reach as high as 100F (38C) in the coming days 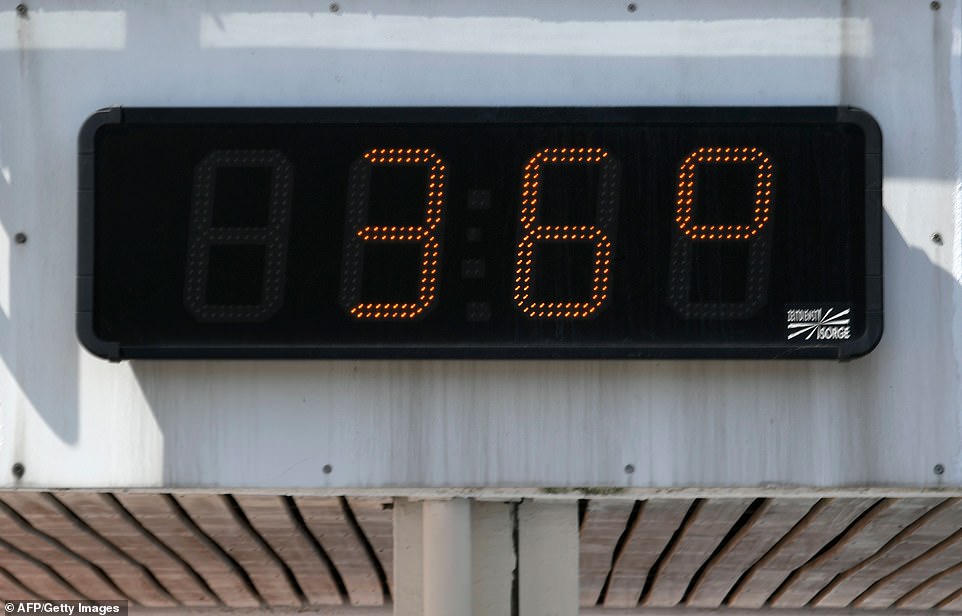 A temperature of 36C was recorded at a swimming pool in Essen, Germany, on Tuesday – with conditions set to worsen throughout the week 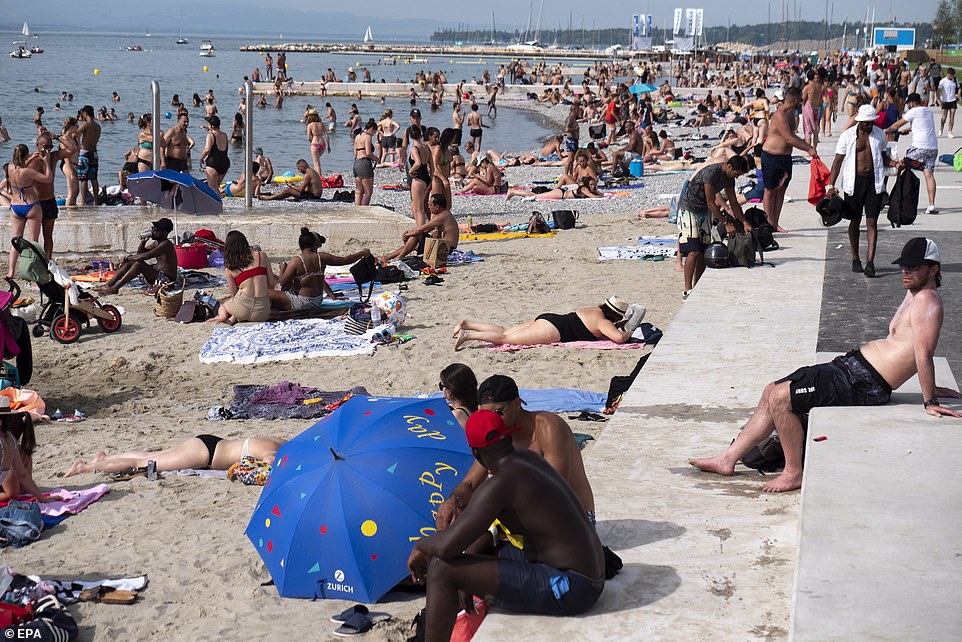 People enjoy the sunny and warm weather on the beach plage des Eaux-Vives on the shore of Lake of Geneva, in Geneva, Switzerland, Tuesday 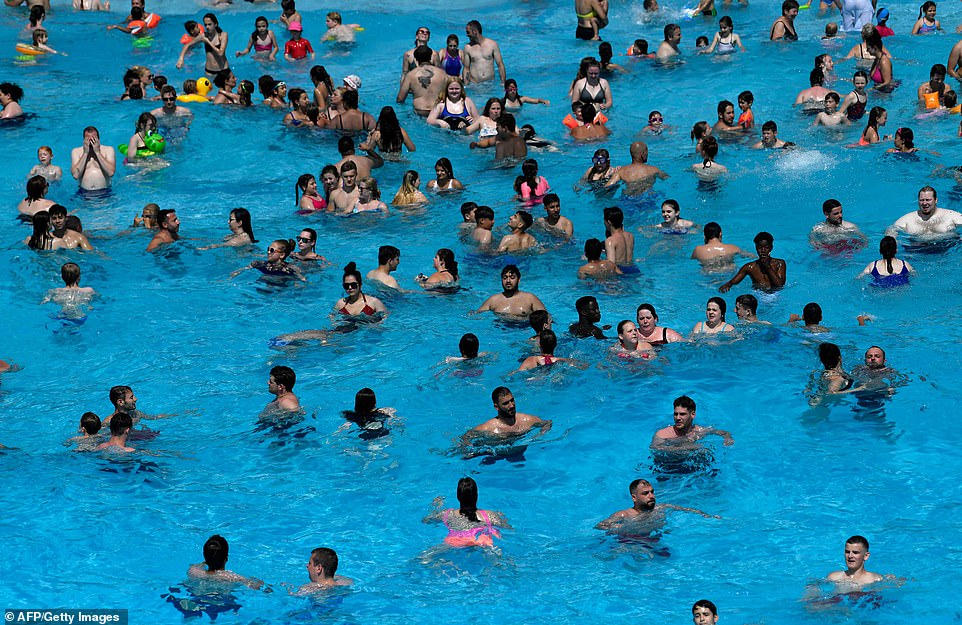 Visitors swim in a swimming pool in Essen, Germany, as the heatwaves settles in what forecasters are warning will likely be record-breaking temperatures for June 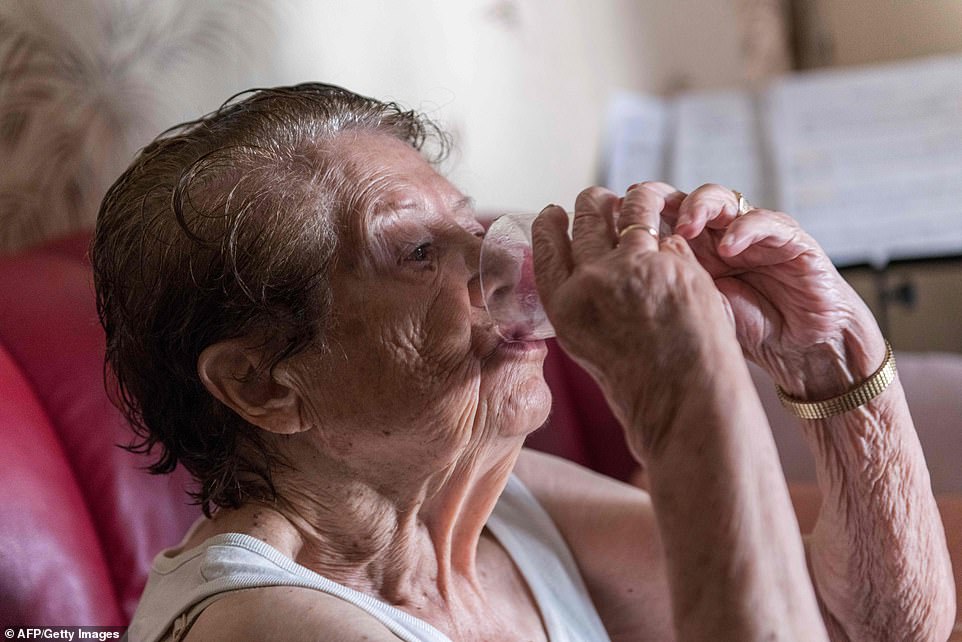 An elderly person drinking a glass of water to avoid heatstroke in Clermont-Ferrand, France 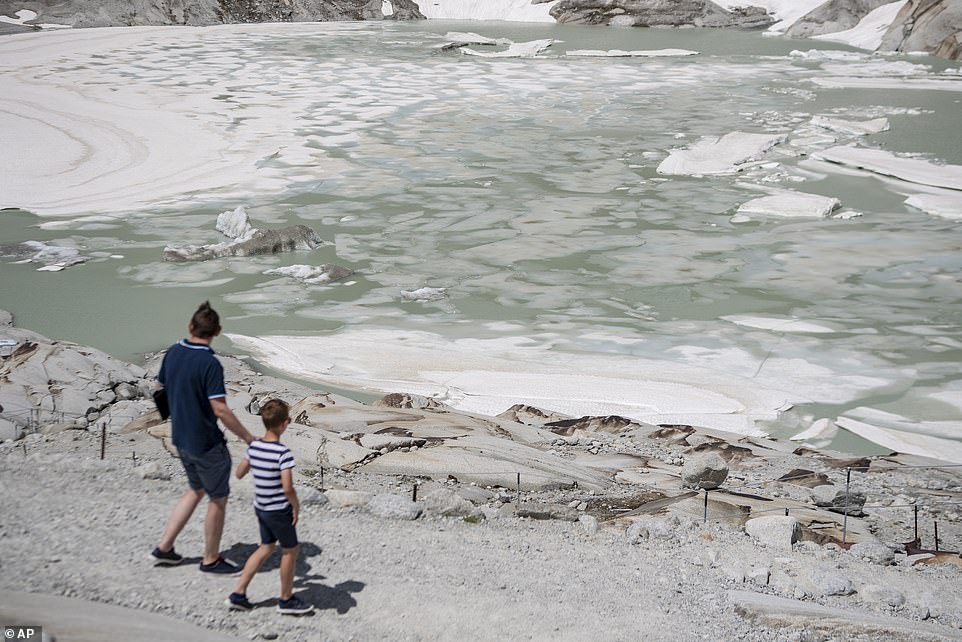 People walk around a lake at the melting Rhone Glacier in Furka, Switzerland, which will also see high temperatures this week