In a move that would result in rocketing fares and fewer flights for British passengers, some of the Continent’s biggest carriers are advocating a tough post-Brexit aviation deal.

Leaked briefing documents seen by the Daily Mail show they want British airlines to be treated as ‘third country citizens’ in a move that would severely reduce the number of routes they can operate within the EU.

Ryanair boss Michael O’Leary, pictured suggested German and French airlines were lining up to ‘shaft’ British Airways and EasyJet as a result of the Brexit process 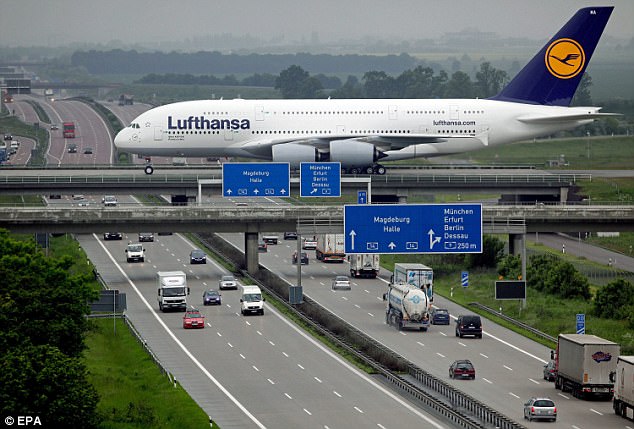 Germany’s Lufthansa, French-owned KLM and TAP Portugal are among the foreign carriers that have backed the briefing – which pushes for the UK to lose its coveted ‘cabotage’ rights that enable airlines to fly freely in and around the EU.

EasyJet, Jet2 and Monarch would not be able fly within or between EU countries.

The European airlines are also pushing for the UK to be granted an aviation agreement similar to those of Israel and Morocco, conferring only ‘third party’ status.

In these cases, EU states decide who can fly, how many flights can be operated and where passengers can fly to.

James Daley, of Fairer Finance, said: ‘This is just another trap that the British Government are going to have to navigate as they proceed with their Brexit negotiations. It’s up to the Government to ensure that they negotiate a fair deal which protects the interest of British citizens.’

Japan’s prime minister said yesterday he had full confidence in the UK economy and would ‘work quickly’ on a post-Brexit trade deal.

Shinzo Abe told the chiefs of Japan’s top firms that Britain would remain a ‘compelling’ place to do business.

Speaking alongside Theresa May in Tokyo, he said: ‘I have trust in the UK economy after Brexit.’ He said continued investments in Britain over the past year showed bosses’ belief in the nation’s future.

Mrs May held one-to-one meetings with the heads of Nissan, Toyota and Hitachi. She later told the conference of Japanese business leaders: ‘There are few places where the opportunities of doing so are greater than Japan, the third largest economy in the world.’

Japanese firms invest in excess of £40billion in the UK and more than 1,000 Japanese firms employ at least 140,000 people in Britain.

Emma Coulthurst, of holiday price comparison site Travel Supermarket, said: ‘If the number of flights which a UK airline can take to an airport is restricted, prices are likely to rise.’

Airlines UK, whose members include easyJet, Flybe, British Airways, Thomas Cook and Monarch, said it was aware of the briefing document, which has been circulating since May 11.

Tim Alderslade, its chief executive, said: ‘We would encourage ministers to seek as liberal and open arrangements as possible, including cabotage rights.

‘This is a technical issue that needs to be resolved but … We fully expect flights to be protected because the benefits to both consumers and companies across the UK and the rest of Europe are so significant.’

But Ryanair boss Michael O’Leary said: ‘The French and Germans aren’t sitting on the sidelines. They’re going to actively shaft BA and EasyJet. This is a historic opportunity for them and it’s in their briefing document – no internal flights between Europe for any UK airline even if there is a bilateral agreement. EasyJet are s******* themselves.’