Every week our Holiday Hero Neil Simpson takes an in-depth look at a brilliant holiday topic, doing all the legwork so you don’t have to. This week: crossing Europe by night train.

Night trains are among the most atmospheric ways to cross Europe, and they’re roaring back into fashion in time for summer.

‘Sleeper trains have had a hard time but they’re enjoying a real renaissance,’ says Mark Smith, founder of rail information service seat61.com. He says they’re popular among climate-conscious travellers who like to cover long distances without flying, and that many passengers enjoy the ‘golden age’ atmosphere of falling asleep to the rhythmic sound of a train.

Golden age: Take an early afternoon Eurostar to Paris and have dinner at Le Train Bleu restaurant at Gare de Lyon before heading across Europe on a sleeper train 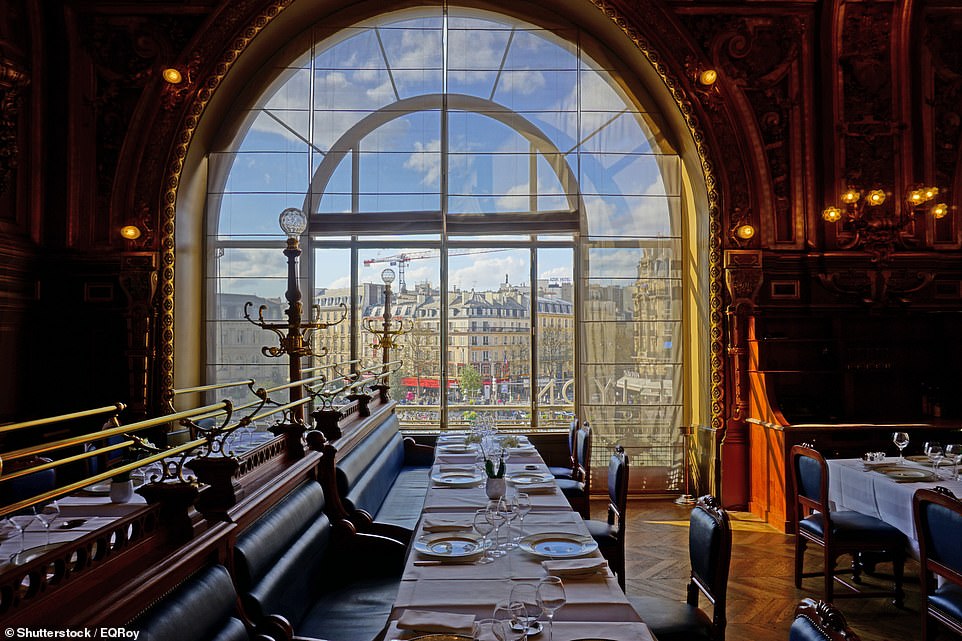 Above is the view from Le Train Bleu, a restaurant steeped in old-school glamour

Most compartments have two bunks, though some have four, making them perfect for families. Bedding is normally provided and most include toiletries and towels.

There are some compartments with en suite toilets and showers, but the majority have shared facilities at the end of each carriage. Some night trains also have bistros offering a range of dishes in the evening, and many serve coffee and breakfast trays in the morning.

Here are some of the best routes to try.

If you’re heading to the South of France, Smith suggests taking an early afternoon Eurostar to Paris and having dinner amid the old-school glamour of Le Train Bleu restaurant at Gare de Lyon.

Then stroll across to the other side of the River Seine to Gare d’Austerlitz to board the 9pm Intercités de Nuit, or IC Night train to Nice. It arrives on the sunny French Riviera just after 9am. 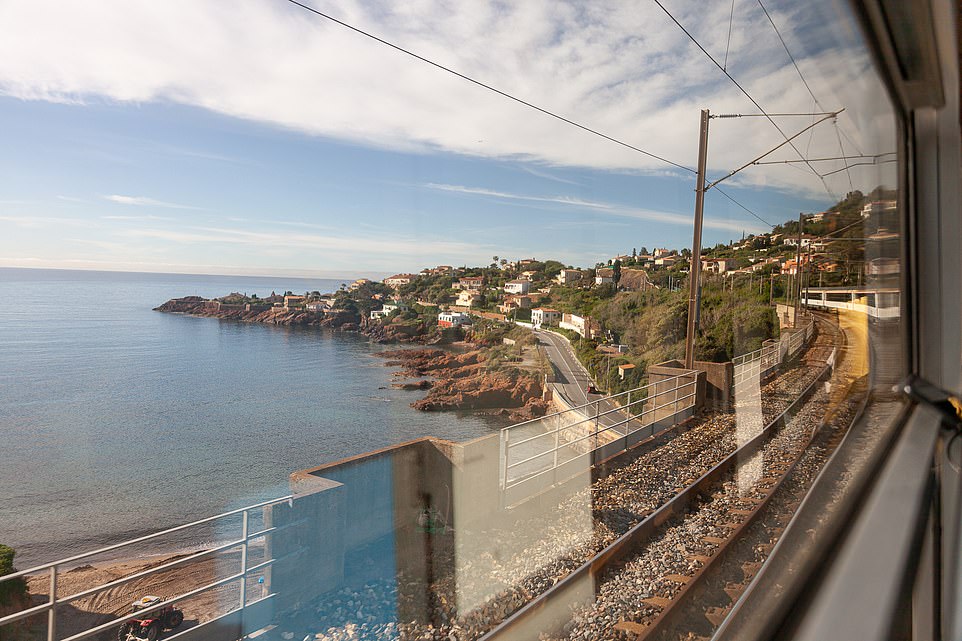 In Paris, board the 9pm Intercites de Nuit train to Nice and you’ll arrive on the sunny French Riviera (above) just after 9am 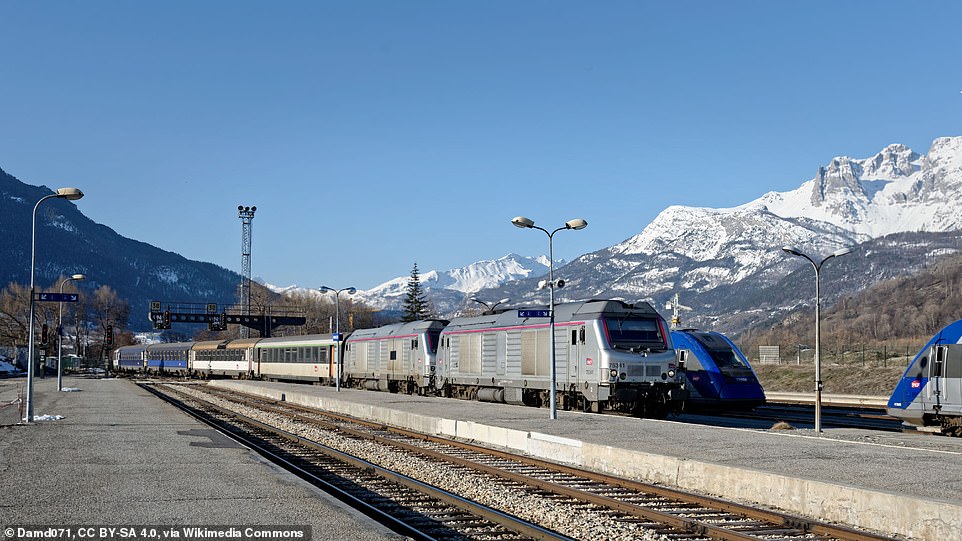 Night-train fares on the Intercites de Nuit train start at £43pp for a bunk in a four-berth compartment. Above is the train in the French city of Briancon, running on a different route. Picture courtesy of Creative Commons

Night-train fares start at £43pp for a bunk in a four-berth compartment, the smallest available.

Couples or groups of three can pay a supplement – normally slightly less than the cost of any empty beds – for sole occupancy.

All across Europe, Austrian-owned Nightjet sleeper trains link major cities. While you can’t usually buy food or drink on board these services, passengers can bring their own to enjoy in cabins.

Standard-class sleeping cars on Nightjet trains have one, two or three-berth compartments with sinks, while deluxe versions have en suites. 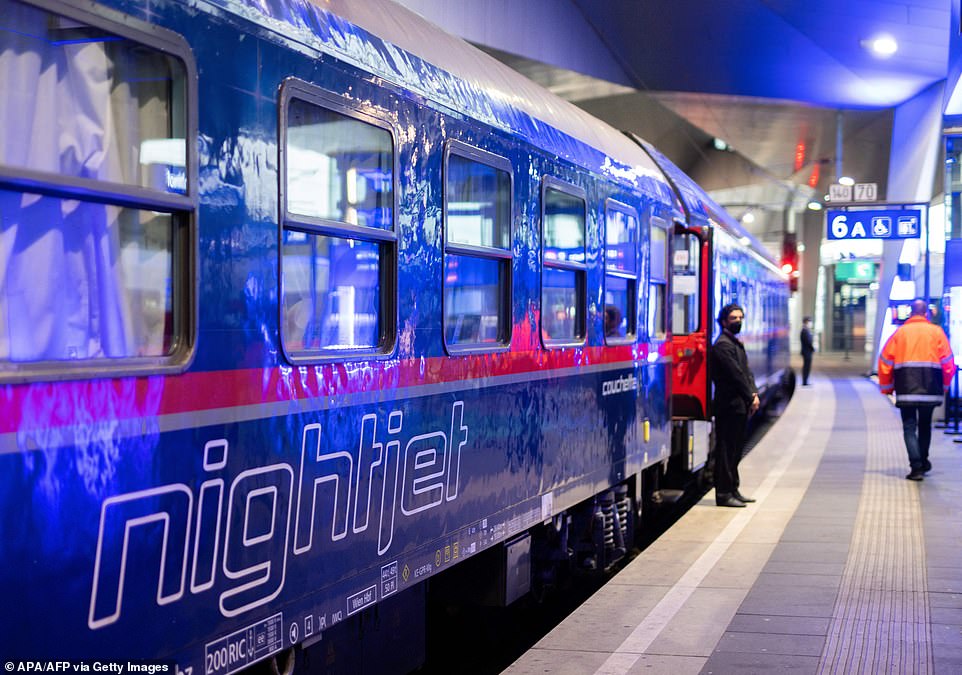 All across Europe, Austrian-owned Nightjet sleeper trains link major cities. Above is a Nightjet train in Vienna 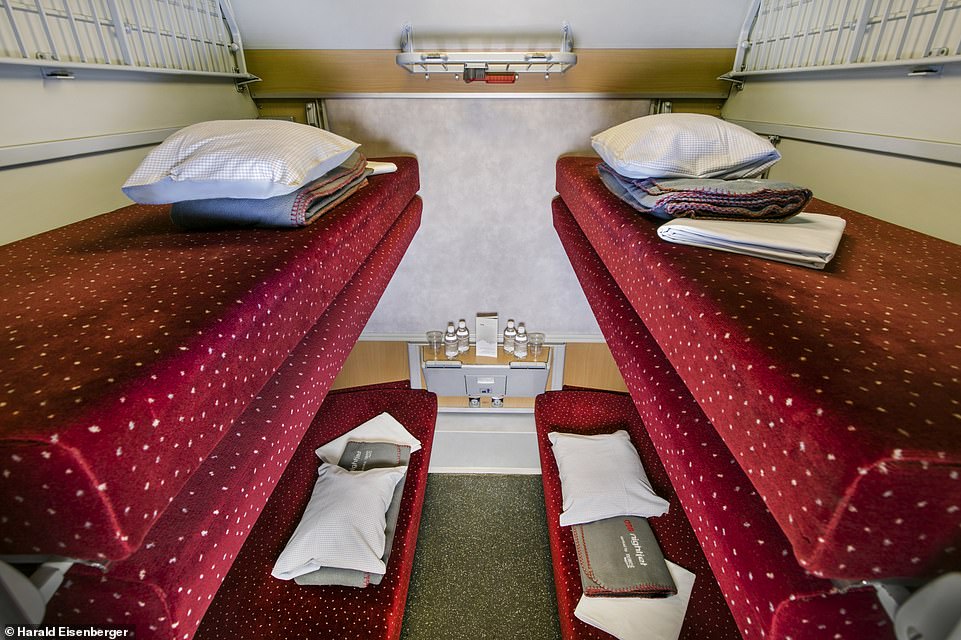 Above is a couchette on a Nightjet train. Cities on Nightjet routes include Paris, Brussels, Amsterdam, Vienna, Berlin, Munich, Rome and Venice 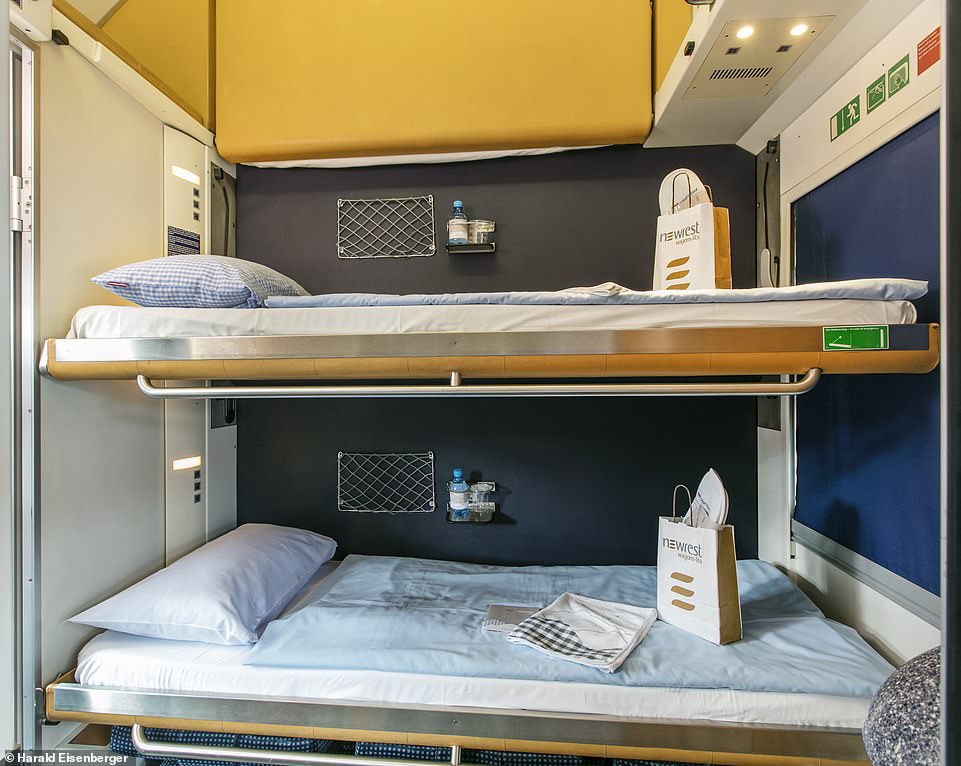 Bottles of water are left in each Nightjet berth for when you board, while hot drinks and a chilled breakfast are delivered in the morning 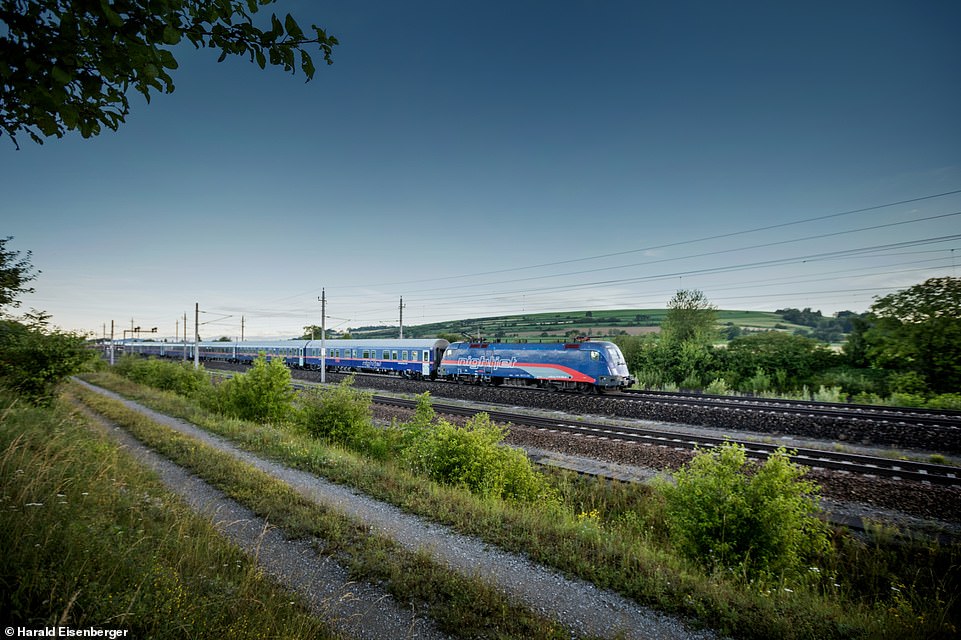 Bottles of water are left in each berth for when you board, while hot drinks and a chilled breakfast is delivered in the morning (passengers order items such as yogurts and pastries from a menu the night before).

Cities on Nightjet routes include Paris, Brussels, Amsterdam, Vienna, Berlin, Munich, Rome and Venice – and each arrives without passengers being woken up mid-journey for passport checks. On the Vienna to Venice route, trains depart at 9.30pm and arrive at about 8.30am. Fares start at around £88pp in a two-berth compartment.

Another evocative journey is Prague to Budapest, where grand Keleti station has statues of British steam rail pioneers James Watt and George Stephenson.

Trains on this route are run by EuroNight Metropol, and each carriage has 12 sleeping compartments that can be reserved as singles, doubles or triples. 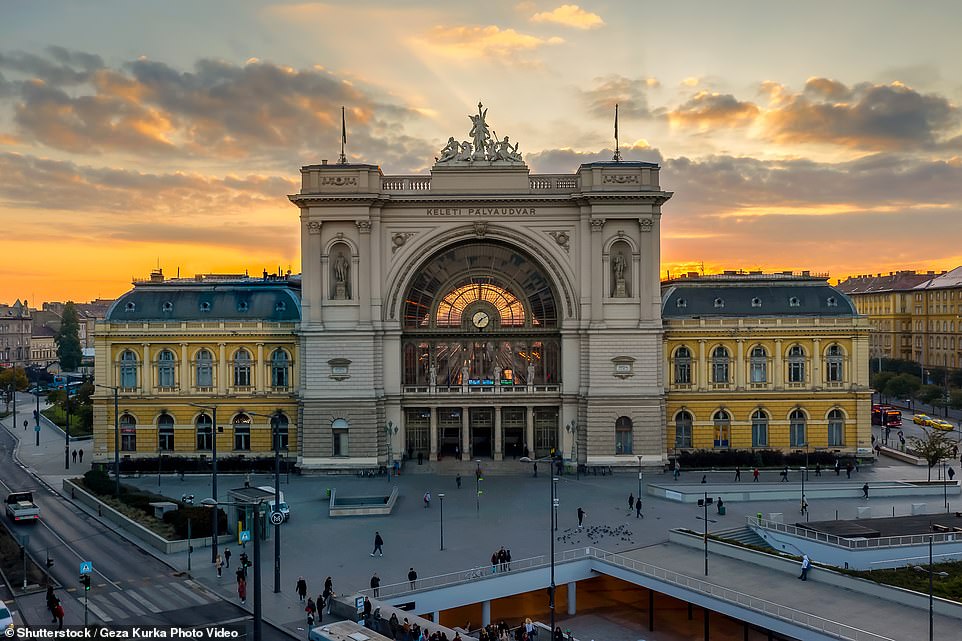 Get a EuroNight Metropol train from Prague to Budapest, where grand Keleti station (above) has statues of British steam rail pioneers James Watt and George Stephenson 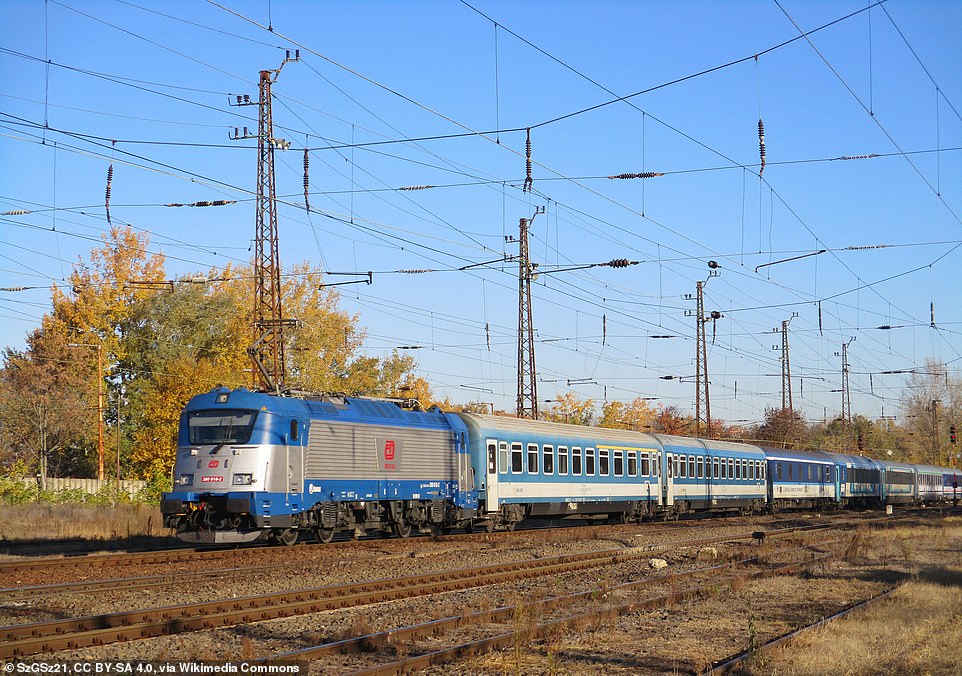 Each carriage of EuroNight Metropol’s trains has 12 sleeping compartments that can be reserved as singles, doubles or triples. Above is the train arriving in Budapest. Picture courtesy of Creative Commons

Hotel-style keycards open compartment doors, and unlike some sleeper trains you should also get wi-fi and plug sockets.

Hot drinks and breakfast boxes are served in the morning, and during the night there’s a room service menu available for light snacks and drinks from the sleeper car attendant.

Leave Prague by 10pm and wake up in the heart of Budapest by 8.30am. Fares cost from about £55pp in a two-berth sleeper.

For train and cabin photos and booking information for all European night trains visit seat61.com. Find fares and train times at thetrainline.com.