After picking up a surprise knighthood on Friday, Tory Eurosceptic John Hayes should be celebrating.

Instead he’s found himself being mocked by a fellow party Brexiteer who suggested that some colleagues believed he got it from the Prime Minister to persuade him to back her in next month’s crucial EU vote.

Sir John was teased by Tory MP Mark Francois who said MPs took his ‘shock’ award as a sign of the Government’s desperation to stave off a defeat.

In a sarcasm-laden letter, Mr Francois mocked the ‘staunch Eurosceptic’ MP, saying: ‘Do not be alarmed – your colleagues…know you are made of sterner stuff!’

He heaped ridicule on Sir John, suggesting he could write down his political principles ‘on the back of an old postage stamp’.

He added: ‘It’s entirely up to you but could I cheekily suggest a crest with an utter cock rampant on one side and a big chicken on the other.’

Sir John hit back by dismissing Mr Francois’s letter as a ‘comic turn’ and insisted his knighthood made no difference to his refusal to vote for the EU withdrawal agreement as it stood.

He told The Mail on Sunday: ‘As I’ve made very clear before my honour, I cannot support the deal as it now stands.’

Friends rallied to Sir John, insisting that, as an MP for over 20 years and Government Minister for more than seven years, he entirely merited his honour.

They claimed Mrs May had sanctioned the award even though Sir John saw her earlier this month to tell her he could not vote for the withdrawal agreement as it stood.

But No 10 surprised MPs by choosing to announce the Lincolnshire MP’s award last Friday – rather than wait till the usual New Year’s Honours. 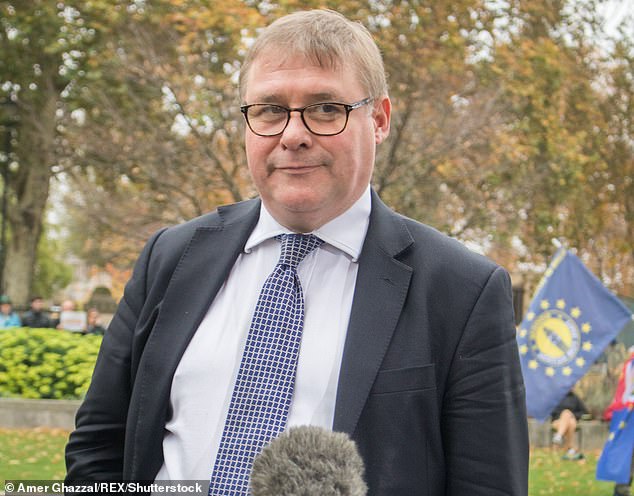 Mark Francois, Conservative MP for Rayleigh and Wickford, mocked Sir John and suggested he could write down his political principles ‘on the back of an old postage stamp’

The move, so close to the crucial Commons EU vote, sparked immediate Brexiteer suspicions that potential Tory critics were being ‘enticed’ into not opposing the PM’s plan.

Mr Francois, claiming to be writing on behalf of the Tories’ Brexiteer European Research Group, congratulated Sir John but said: ‘I must confess this came as a bit of a shock to many of us… outside of the normal honours cycle.’

Mr Francois, ERG vice-chairman, added that ‘some colleagues are unkindly suggesting this award is a sign…of absolute desperation by a Government which has effectively abandoned Brexit’.

Those unkind suggestions were that the Government was ‘now reduced to handing out knighthoods to malleable colleagues, in a doomed attempt to stave off an almost certain defeat’ in the EU vote.

Mr Francois stood by his letter yesterday. But ERG chairman Jacob Rees-Mogg effectively rebuked him, insisting it was not issued on behalf of his group and making clear Sir John deserved the award.