Residents in bushfire-ravaged towns across New South Wales were urged to evacuate by 10pm overnight or risk being trapped in rising floodwaters as wild weather lashes southern parts of the state and a body is pulled from fast-moving waters.

Up to 200mm of rain fell on the burnt-out town of Moruya on the south coast on Sunday as residents in low lying areas were told to seek higher ground.

Mudslides filled with bushfire debris from the catastrophic blazes of the summer are also a cause for concern.

Residents have reported flash flooding, particularly along the Deua River, which peaked at eight metres on Sunday afternoon, and authorities are warning Monday’s deluge could be even more catastrophic.

About 6pm on Sunday, the body of a missing kayaker was pulled from Murrumbidgee River, south of Canberra, highlighting the dangers of getting caught out during the deluge.

The man was reported missing about 2pm after he was separated from his kayaking group amid rising river levels, torrential rain and increasingly difficult conditions. His kayak reportedly got caught under a bridge.

Authorities said earlier on Sunday they were hoping to find him safe and well, but were ‘prepared for him to be deceased’.

Pictured: Rescue crews saving two horses amid rising flood levels in Canberra, as a kayaker’s body is pulled from a stream 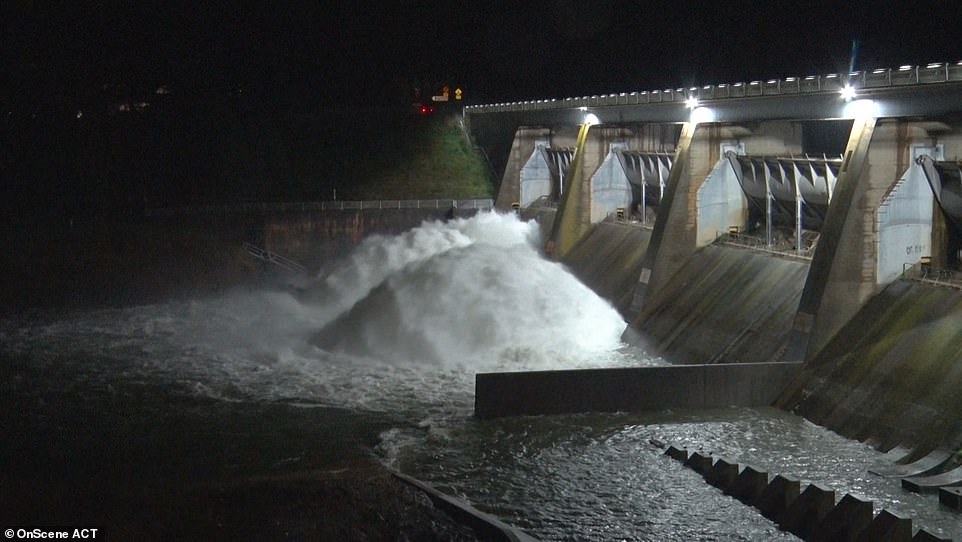 A catchment area in ACT was overflowing at the weekend as torrential rain hit the state, causing flash flooding 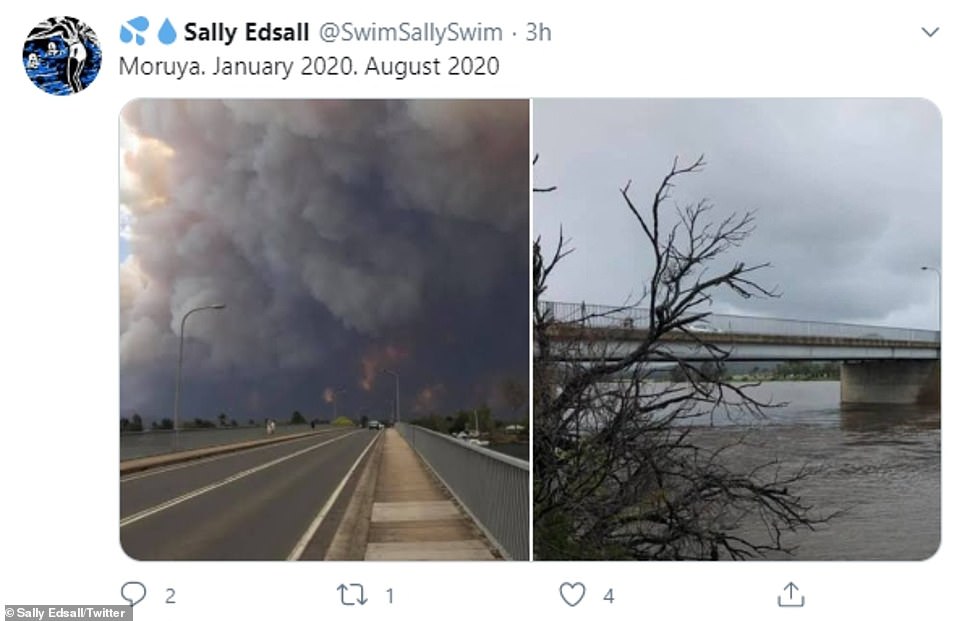 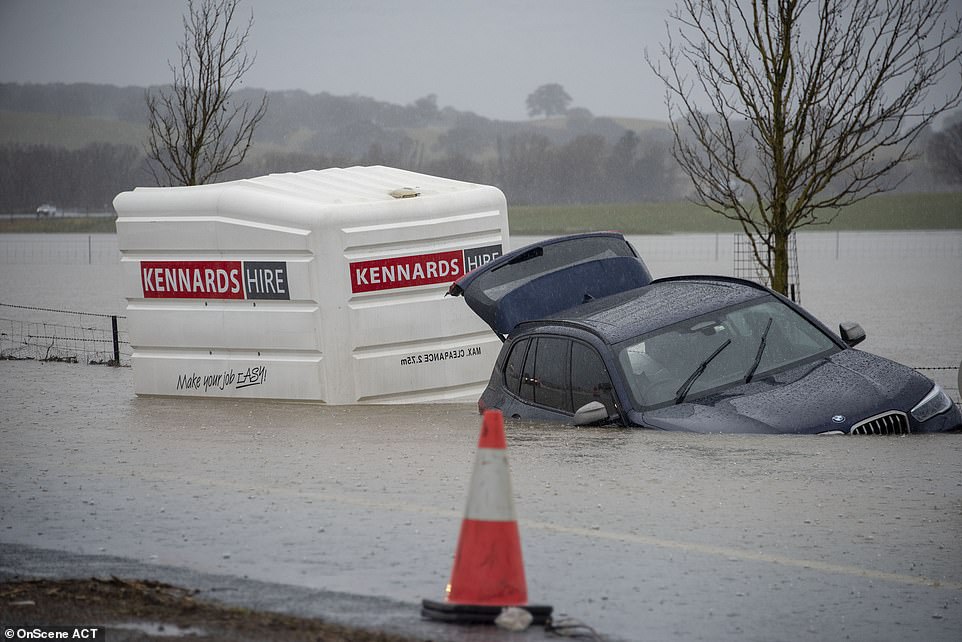 Canberra suffered extreme and torrential rain on Sunday. Pictured: A car caught in the floodwaters

Mark Ethell, an evacuated resident from the Mourya Waterfront Hotel, told Channel Nine he was afraid of the impact flooding could have on his community, which is still reeling from the bushfire season.

‘I’m actually concerned for a lot of the people that have been through the fires, the COVID,’ he said.

‘They’re living in tents, they’re actually living in caravans right now and a lot of our low-lying areas around town. It’s going to be pretty hard.’

The State Emergency Service urged residents in parts of Sussex Inlet and Moruya’s CBD to evacuate earlier on Sunday afternoon.

‘If you remain in the area after 5pm you will be trapped and it may be too dangerous … to rescue you,’ the SES said earlier on Sunday.

By Sunday evening, that evacuation order was updated to include Terara, East Nowra, Worrigee and North Nowra.

The Shoalhaven River at Nowra is predictedto peak near 4.40 m at about 1pm on Monday with authorities warning of ‘major flooding’. 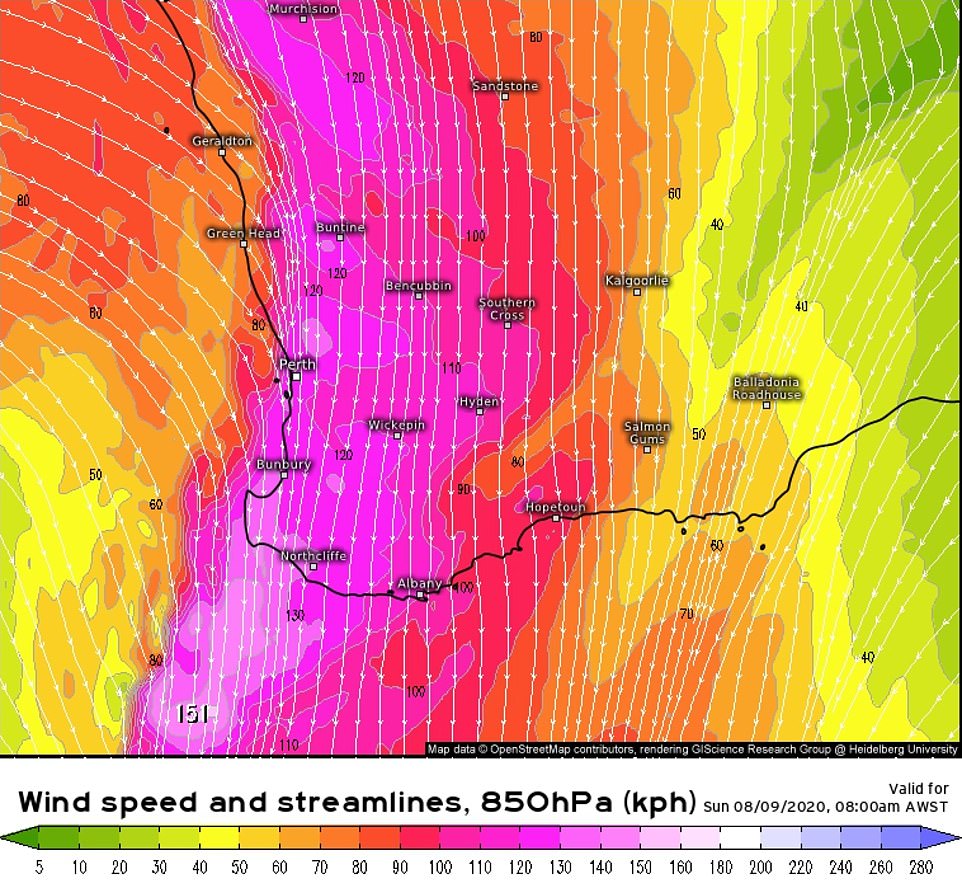 Torrential rain has pummeled the south coast of New South Wales in particular, but also in Perth (pictured) 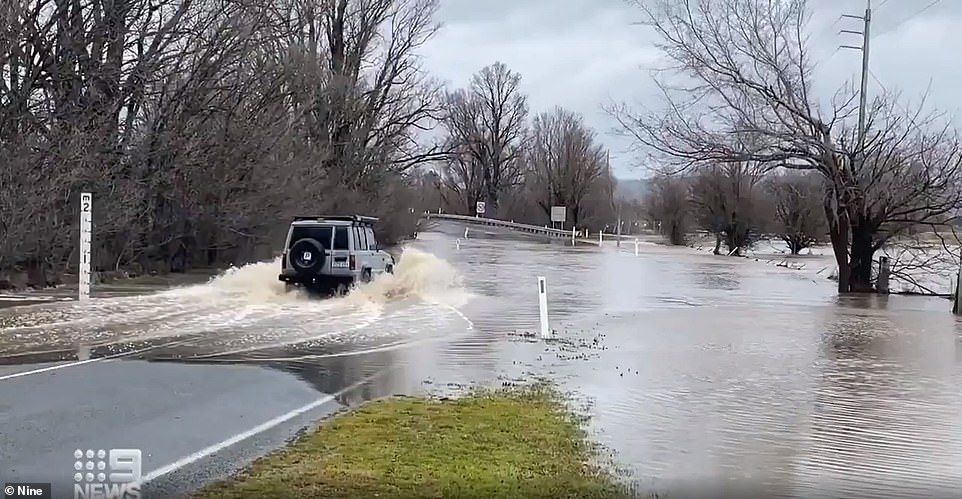 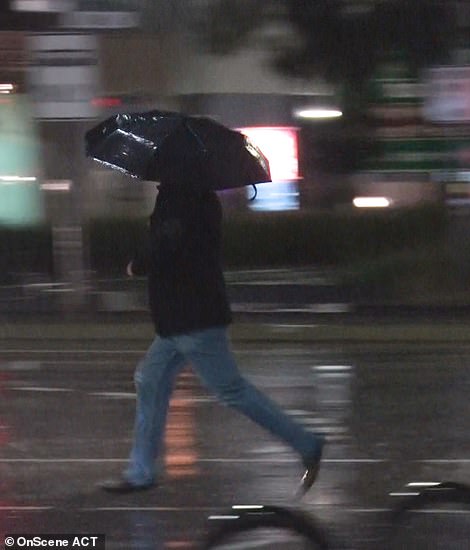 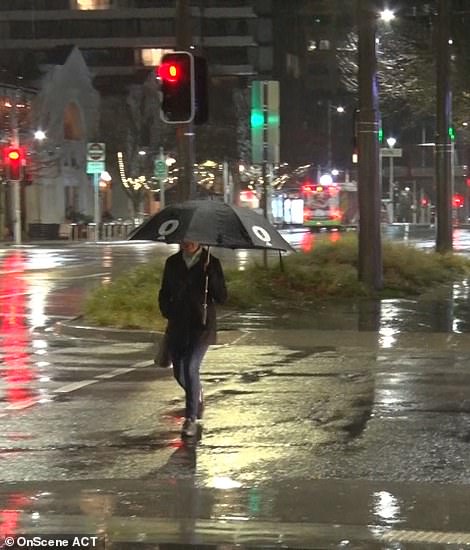 People made a mad dash in the rain on Sunday night, carrying umbrellas 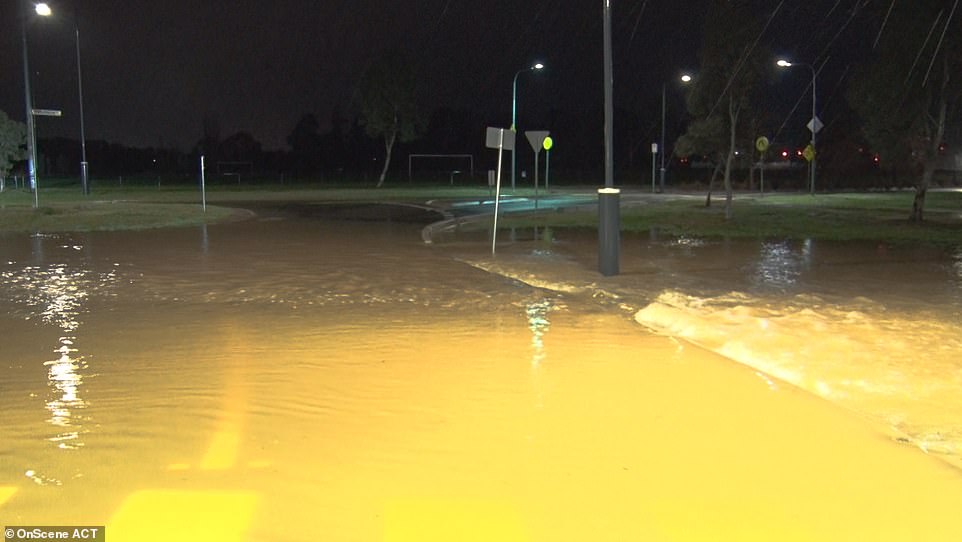 Roads were inundated with water both in NSW and ACT (pictured). SES warned residents who chose to remain in their properties that they may get stuck

An evacuation centre has been set up at the Village Centre at Batemans Bay.

Sussex Inlet is forecast to rise to 1.2m with the high tide on Sunday night and the nearby river at Island Point Road is expected to peak around 1.3m later on Sunday causing minor flooding.

People who can’t stay with family and friends have been advised to go to the Sussex Inlet Police Station to register for emergency accommodation.

The SES has warned properties in the affected areas are likely to become inundated and people could become trapped.

Anybody who chooses to stay behind after the evacuation orders were put in place faces being stranded, with authorities warning they may not be able to rescue everybody.

Similar warnings were distributed during the fire season, when RFS warned they simply didn’t have the resources to return to previously evacuated communities. 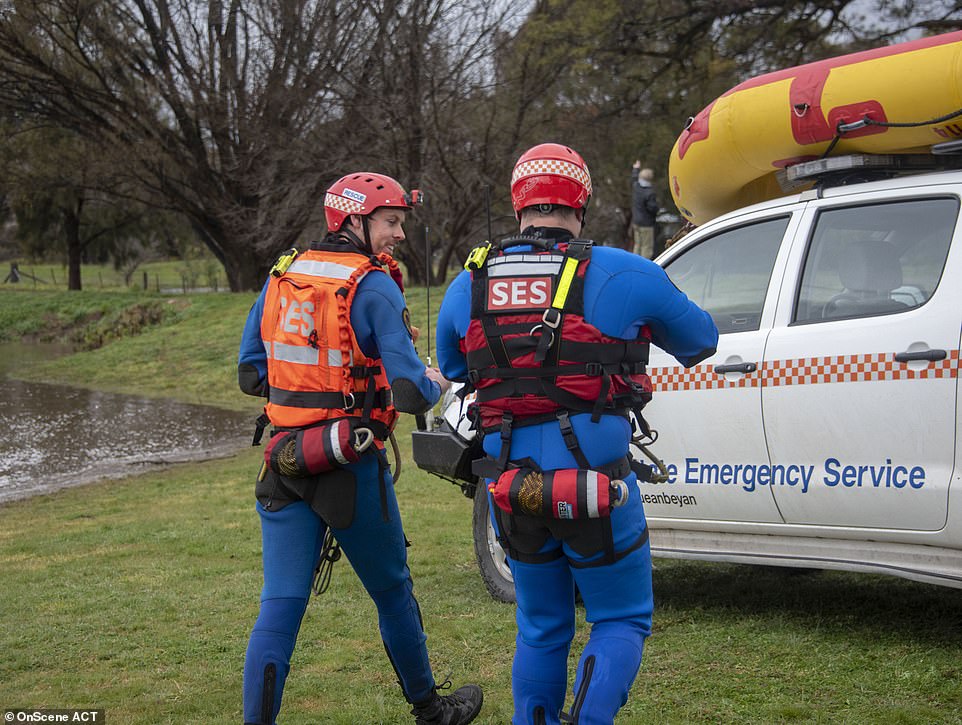 Flood waters were rising on Sunday, leading the SES to urge residents on the south coast to evacuate 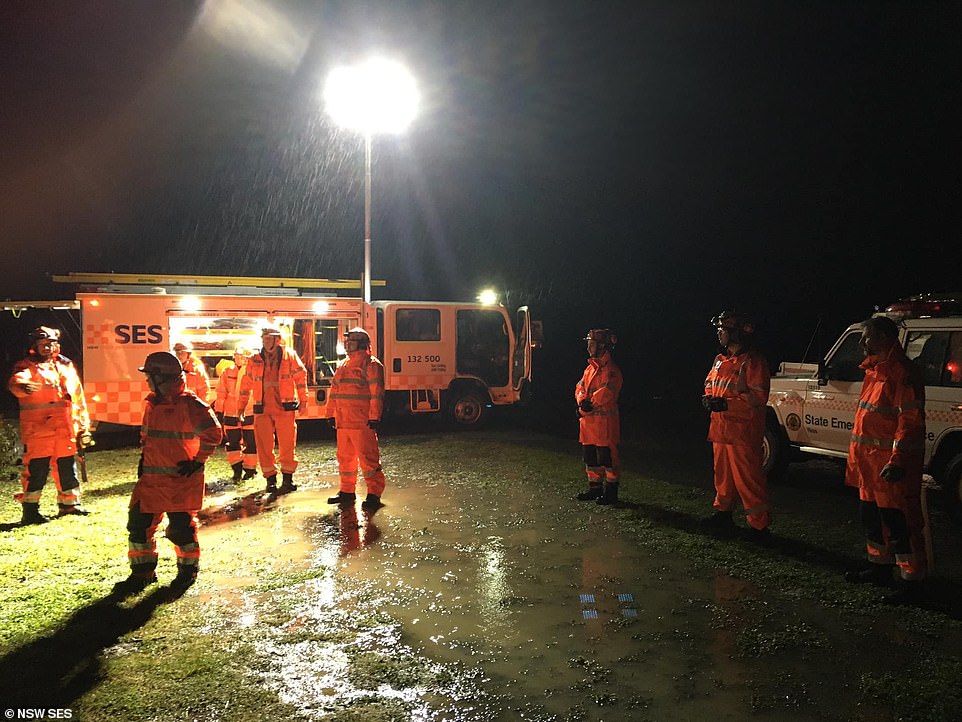 By Sunday evening, that evacuation order was updated to include Terara, East Nowra, Worrigee and North Nowra 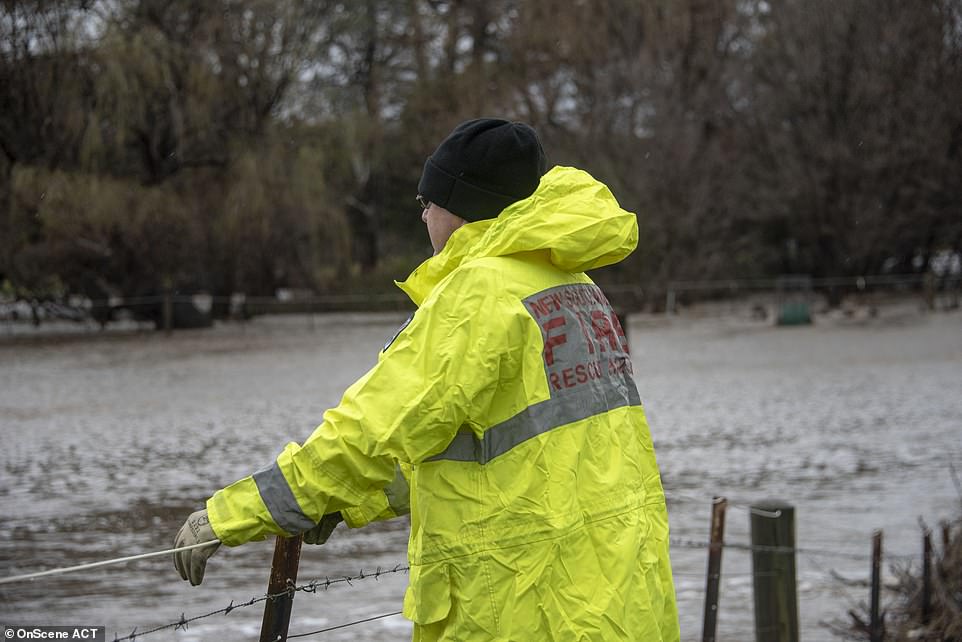 Sussex Inlet is forecast to rise to 1.2m with the high tide on Sunday night and the nearby river at Island Point Road is expected to peak around 1.3m later on Sunday causing minor flooding 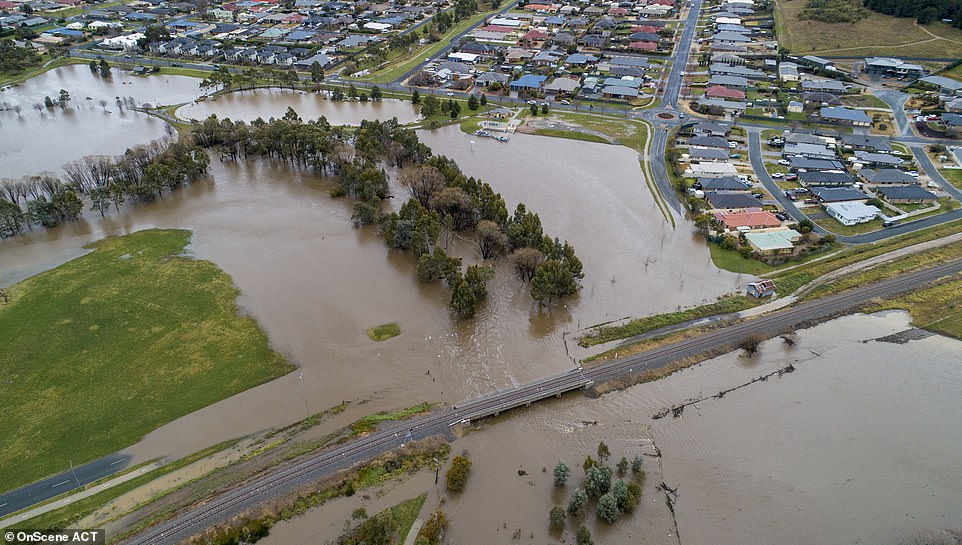 SES Commissioner Carlene York noted the ground across parts of the south coast has become unstable as a result of last summer’s bushfires, urging residents to be alert for landslides and fallen trees.

The SES responded to more than 700 calls for help and conducted more than 18 flood rescues across the weekend with most calls coming from Berry, Nowra, Broughton Vale and Gerringong.

More than 20 homes at Broughton Vale near Berry were also cut off by floodwater.

Sydneysiders have been warned to batten down the hatches as well.

By Monday, the severe weather conditions are predicted to have travelled north toward Sydney.

Bureau of Meteorology senior flood hydrologist Justin Robinson said heavy rains were expected to ease on the south coast later on Sunday and move towards Sydney, the Central Coast and possibly into the Hunter.

‘Hopefully over the next 24 hours the worst of the weather will be over,’ he told reporters on Sunday. 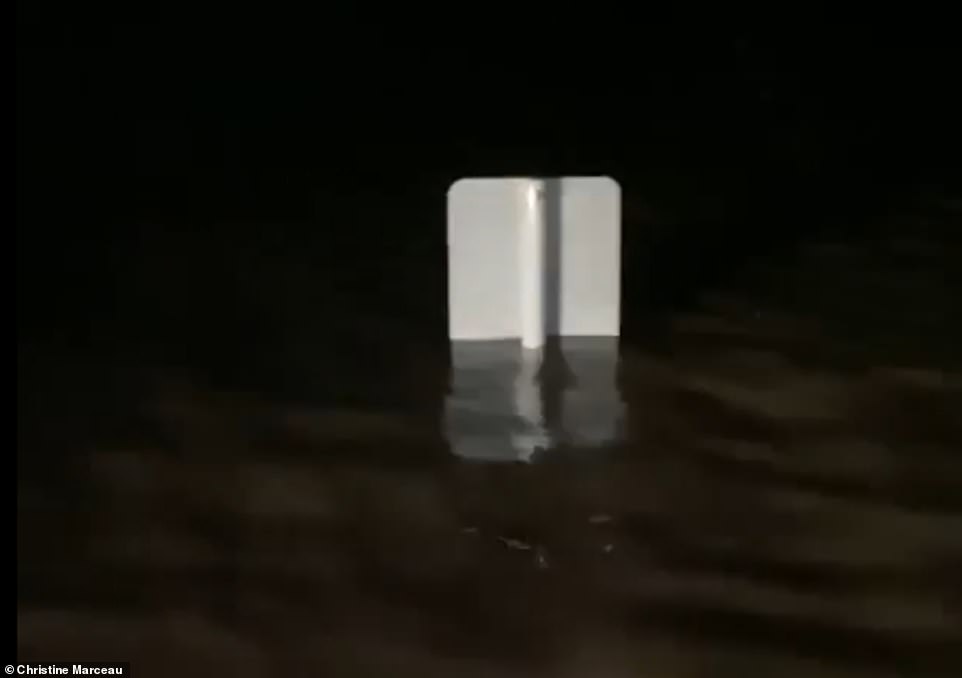 Signs were submerged on Sunday after a weekend of torrential rain 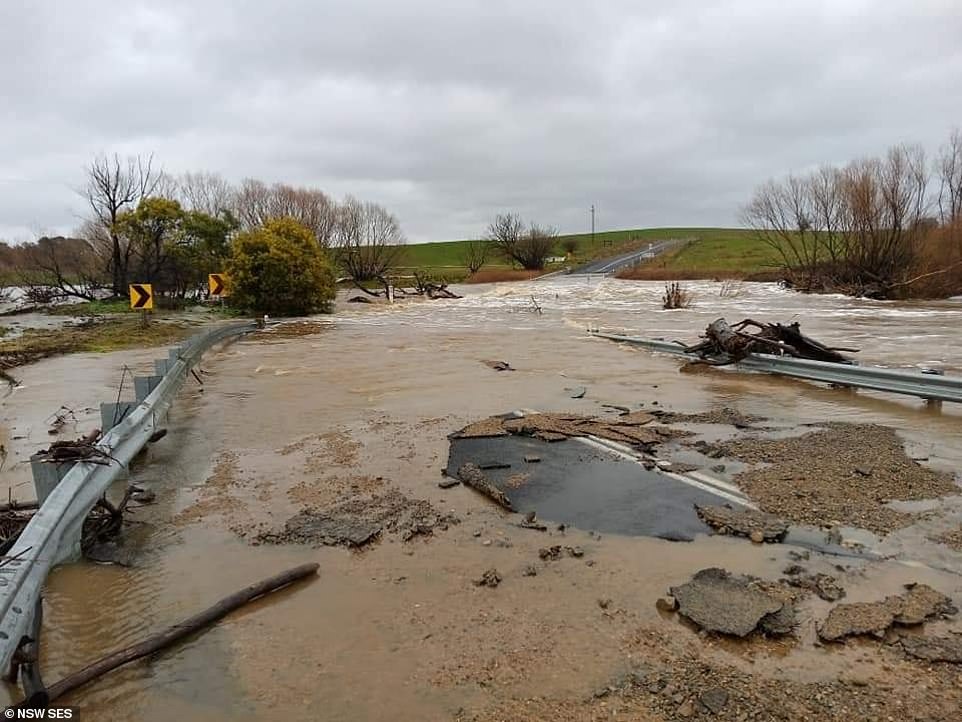 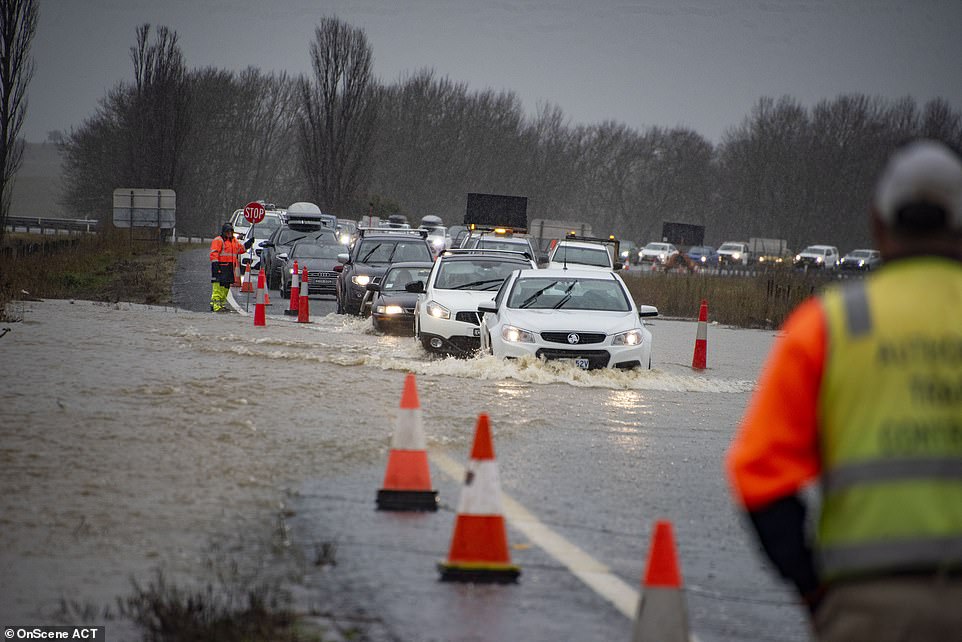 Cars were caught in rising waters in Canberra on Sunday (pictured) 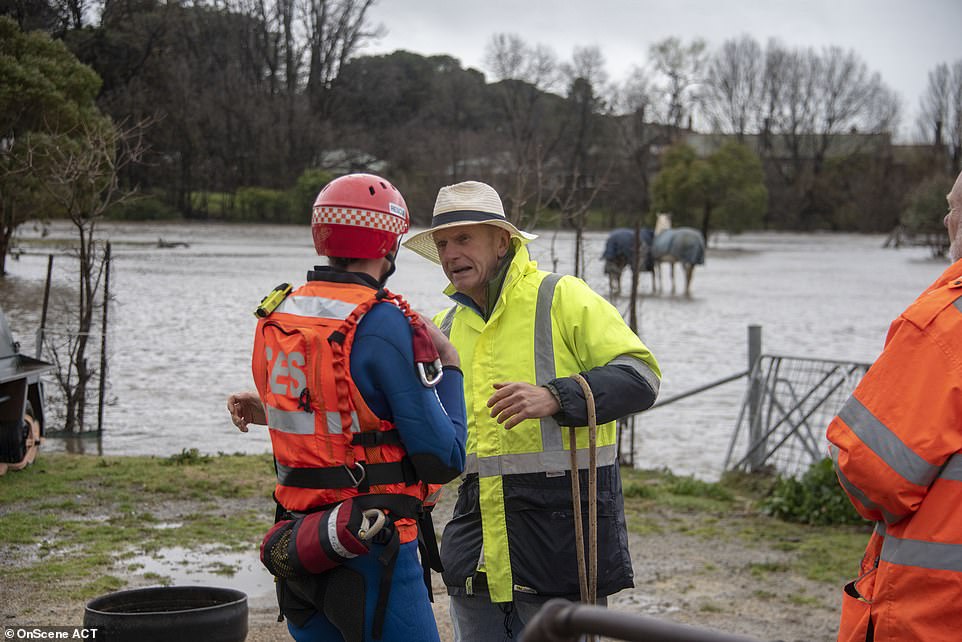 Flood warnings associated with the low-pressure system have also been issued for the Queanbeyan, Molonglo and Snowy rivers.

Severe weather warnings have been issued from Moruya to Kempsey, including in Wollongong, Sydney and Newcastle.

In total, more than 300mm of rain fell across the south coast during the weekend.

While the rain is predicted to ease on Sunday night, it will likely hit Sydney and the Hunter Region by Monday morning.

The low will continue to ravage the Australian Capital Territory as the week progresses, BoM forecasters warn.

Sheep graziers have been warned to pay extra attention to their sheep during the cold snap on Monday, as plunging temperatures increase the risk of losses, particularly with lambs.

Temperatures will drop as low as 3C on Monday and peak at 13C as showers are forecast throughout the day.

By Tuesday, temperatures could plunge to as low was -2C. 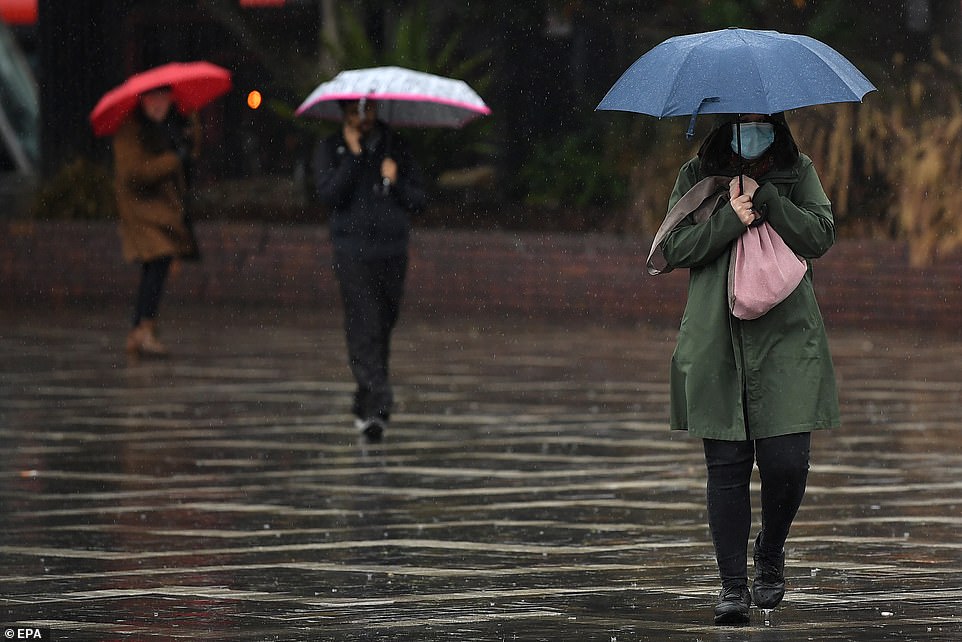 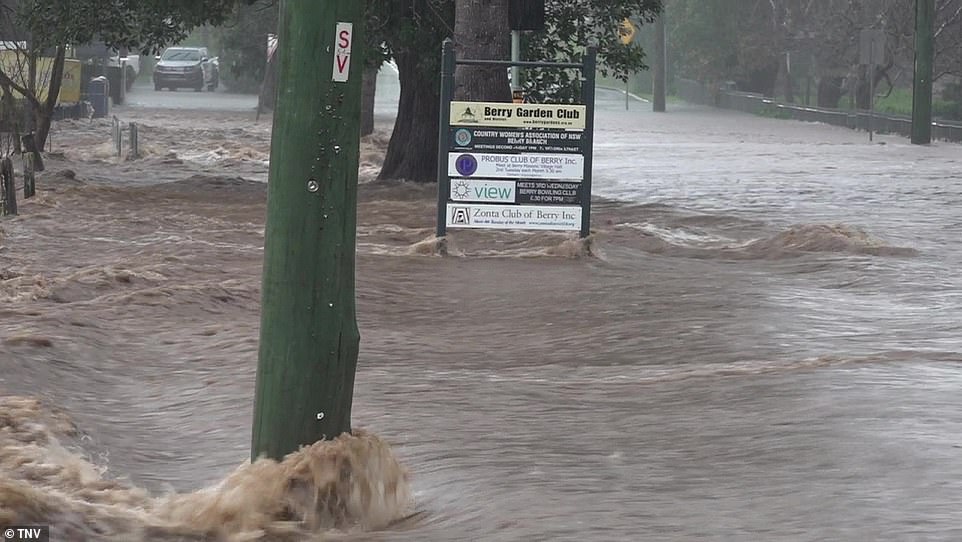 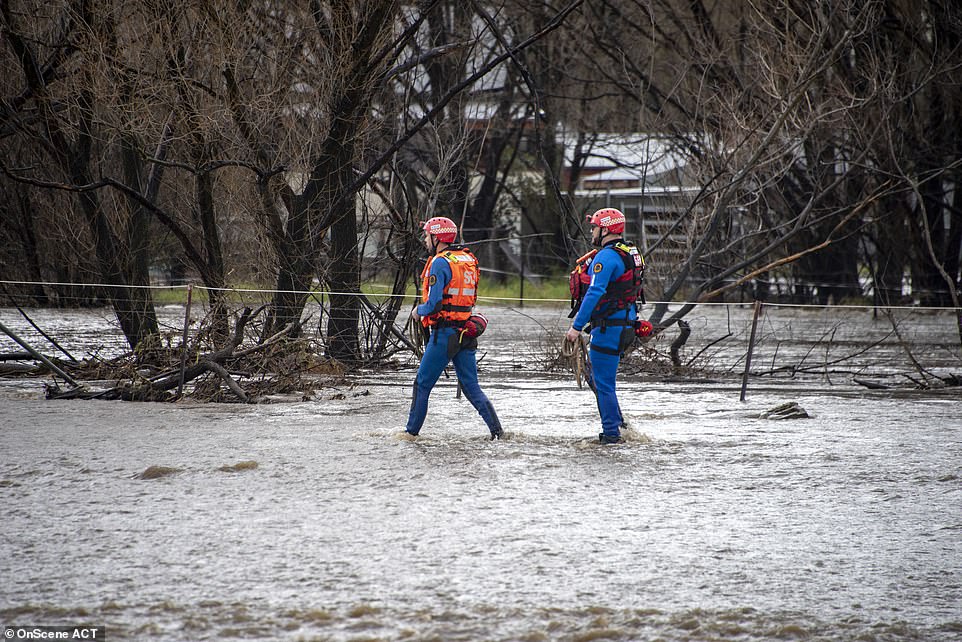 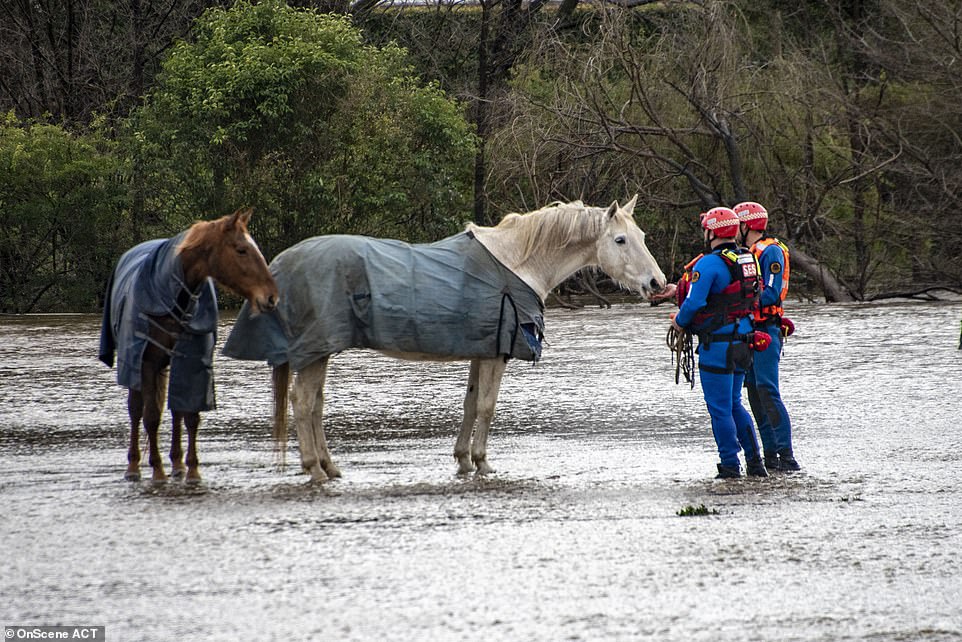 Meanwhile on the other side of the country in Perth, trees crashed into homes and cars as wild weather battered the city on Sunday.

A severe weather warning was issued from Carnavorn to Albany as wind gusts of 110km/h swept across the coast.

More than 3,000 properties were left without power on Sunday.

Heavy rainfall, which could lead to flash flooding, has been forecast throughout south-eastern parts of the state and coastal regions.

Perth is set to receive a month’s worth of rain in just four days as a monster cold front brought in the first of the rains from Sunday.

Parts of the state recorded as much as 45mm on Sunday, with 35mm forecast for Monday and 10mm for Tuesday and Wednesday. 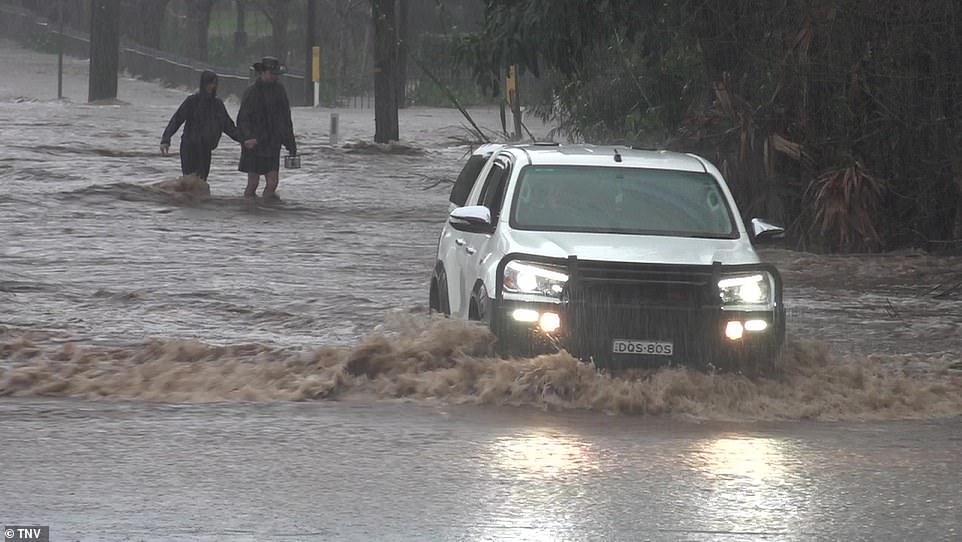 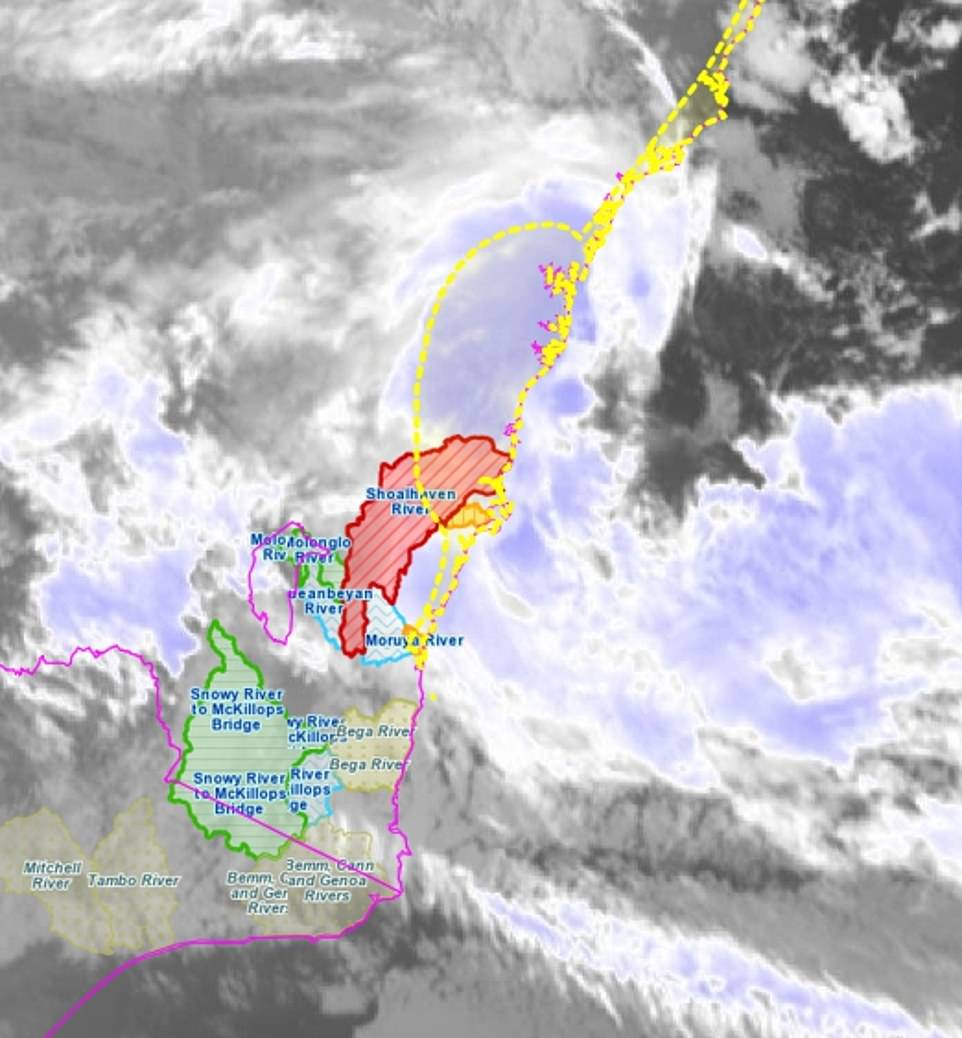 New South Wales will be battered by a weather system half the size of the state with flooding and wild thunderstorms on the way while Perth is expected to get a month’s worth of rain in four days (pictured, rain map for Sunday’s forecast) 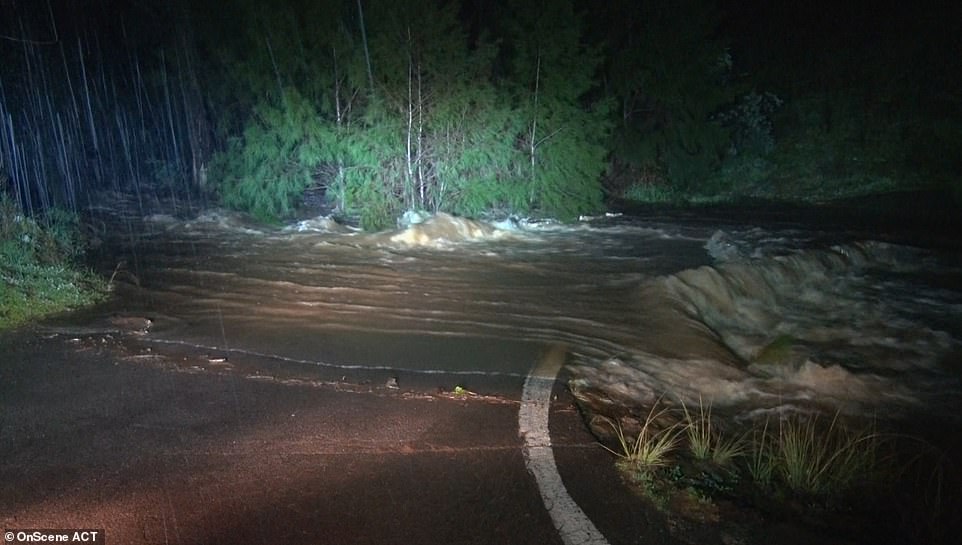 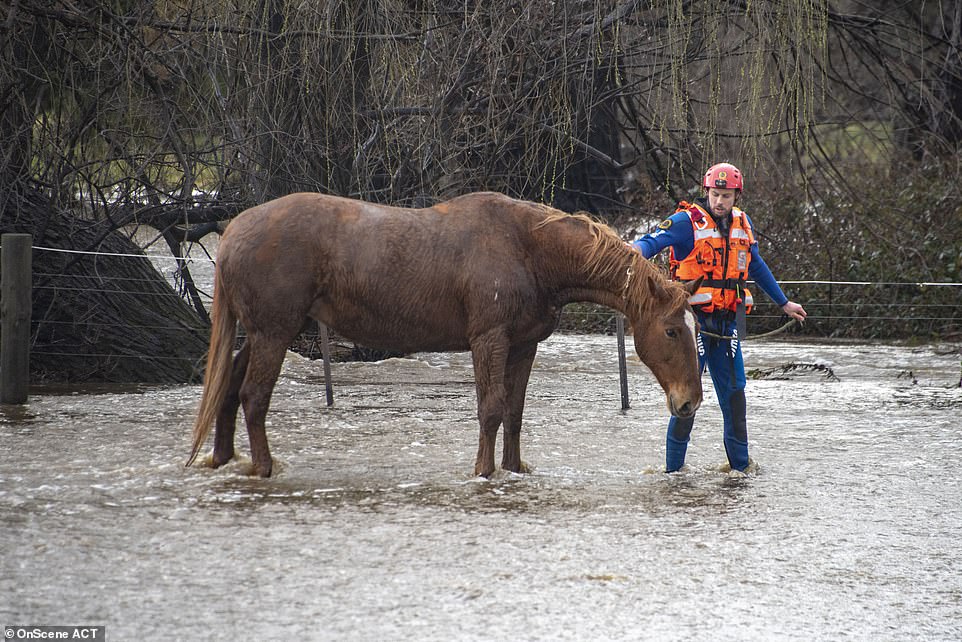