Actress Evan Rachel Wood testified to the United States Congress about the effects of the ‘toxic mental, physical and sexual abuse’ she encountered at the hands of an ex-partner.

The Westworld star gave her harrowing account to members of the House Judiciary Subcommittee on Crime, Terrorism, Homeland Security and Investigations in a bid to support the Survivors’ Bill of Rights Act, which impacts survivors of sexual assault in the US.

She told of the abuse ‘that started slow but escalated over time, including threats against my life, severe gaslighting and brainwashing’ that took place more than 10 years ago.

Actress Evan Rachel Wood testified to the United States Congress about the effects of the ‘toxic mental, physical and sexual abuse’ she encountered at the hands of an ex-partner

Wood said she would wake up ‘to the manthat claimed to love me raping what he believed to be my unconscious body. And the worst part: Sick rituals of binding me up by my hands and feet to be mentally and physically tortured until my abuser felt I had proven my love for them.

‘In this moment, while I was tied up and being beaten and told unspeakable things, I truly felt like I could die. Not just because my abuser said to me, “I could kill you right now,” but because in that moment I felt like I left my body and I was too afraid to run. He would find me.’

Wood spoke of feelings of ‘utter shame and despair’ after being raped several times, and she said that she is still ‘not fine’.

A different man raped her after pushing her onto the floor of a bar storage closet.

‘Because of [the ex-boyfriend’s] abuse, when I was pushed onto the floor of a locked storage closet by another attacker, after hours at a bar, my body instinctively knew what to do: Disappear, go numb, make it go away. Being abused and raped previously made it easier for me to be raped again, not the other way around.’

She said she has been diagnosed with post-traumatic stress disorder (PTSD) and has spent years battling depression, addiction, night terrors and agoraphobia following the cases of assault.

‘Even though these experiences happened a decade ago I still struggle with the aftermath,’ she said.

‘Seven years after my rapes – plural – I was diagnosed with long-term PTSD, which I had been living with all that time without knowledge about my condition.

‘I simply thought I was going crazy.’ 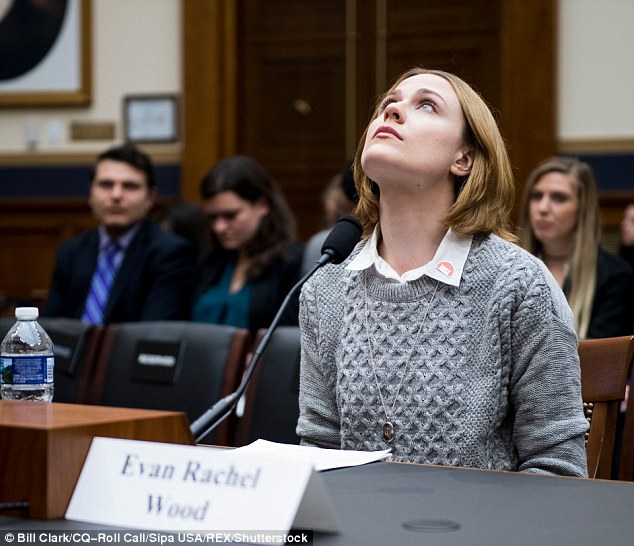 ‘The feeling of paralysis returns when I’m home alone and hear a loud noise and I’m convinced someone is coming to hurt me.

‘I stay awake all night clutching a baseball bat, which began to replace my distraught and absent partners, as trust and touch became increasingly more difficult.’

Wood said she has self-harmed and attempted suicide twice, but that being admitted to a psychiatric hospital was ‘a turning point’ in her life, leading her to seek professional help to deal with the trauma.

The 30-year-old actress has been a vocal backer of the #MeToo and Time’s Up campaigns that were implemented in the wake of the Hollywood sexual abuse scandal.

Wood is among other campaigners who are trying to get the Survivors’ Bill of Rights Act – a civil rights and victims rights legislation signed into law by Congress and former president Barack Obama in 2016 – passed in all 50 states.

The bill, which currently has only been passed on a federal level, will give victims of sexual abuse access to counsellors, as well as efficient rape kits and clear explanations of their rights.

Wood described the bill as ‘a safety net that may help save someone’s life one day’.

Wood was on the panel alongside the chief executive of civil rights organisation Rise Amanda Nguyen and Rebecca O’Connor, the president of Rape, Abuse & Incest National Network (RAINN).

Wood was married to actor Jamie Bell from 2012–2014 and the pair share a son. She had previously been engaged to Marilyn Manson and has publicly come out as bisexual.

She previously spoke of her rapes in a lengthy YouTube video and said she can’t name them as they are white and powerful.

‘My perpetrators were very powerful, very rich, very entitled, very narcissistic white men. I haven’t named my abusers for a number of reasons. One: I’m one person against some very powerful people. Two: Money and time, and re-traumatizing yourself to go after the person that assaulted you takes quite a toll,’ Wood explained in the 2016 video.