Even NHS chiefs back cutting self-isolation period to five days

An NHS leader today said he would support cutting self-isolation to five days amid a staffing crisis leaving hospitals with no option but to cancel operations.

Matthew Taylor, head of the NHS Confederation which represents trusts, said two more days should be shaved off the period as long as it was backed up by science.

He told BBC Radio 4’s Today programme that the situation was ‘desperate’ and any way of getting staff back into work was a ‘good thing’.

But he said it would be ‘completely counterproductive’ to have infectious staff return to wards, because they would spread the virus to other employees.

But they are now facing mounting calls to follow the US, where self-isolation has been cut to five days with patients required to wear a mask for the next five.

Amid a growing staffing crisis in the NHS, 17 hospitals in Greater Manchester yesterday became the latest to shelve some surgeries and appointments.

Up to 15 per cent of staff are off sick with the virus in some hospitals affected, a spokesman said, as the number of Covid patients on wards doubles in a week.

Health minister Gillian Keegan today warned the NHS faced one of the most ‘pressurised winters’ yet because of the staffing crisis.

But she praised doctors and nurses for doing an ‘amazing job’ despite the spiralling pressures.

It comes as some ambulance trusts yesterday asked heart attack patients to ‘get a lift’ to hospital rather than wait for an ambulance. 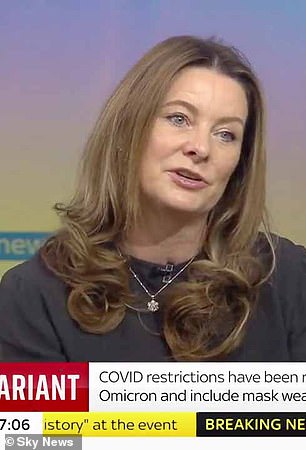 Matthew Taylor, head of the NHS Confederation, said he would back a reduction in self-isolation to five days providing it is backed up by the science. Health minister Gillian Keegan said the NHS faced one of its ‘most pressurised’ winters yet 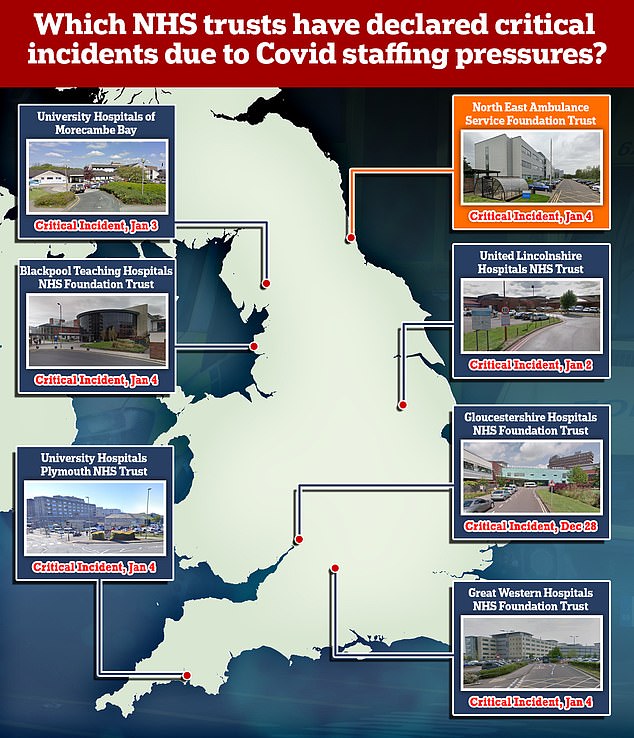 Asked if he could support such a change to self-isolation rules, Mr Taylor told BBC Radio 4: ‘As long as it is based on the science, because on the one hand we do need to try to get staff back to work as soon as possible.

‘Hospitals who have declared critical incidents, for example, are essentially reaching out to staff who are on leave, on rest days or even recently retired and asking them to come back to wards, so the situation is desperate — any way of getting staff back into hospital is a good thing.

Health minister Gillian Keegan said she has asked NHS England to look into reports that friends or family are being asked to transport potential heart attack or stroke sufferers to hospital by one ambulance trust due to being overstretched.

The advice is said to have been given out at North East Ambulance Service NHS Foundation Trust, the Health Service Journal reported.

Ms Keegan told Sky News: ‘That is not what we have put in place at all.

‘We have more ambulance crews in operation than we have ever had, we also gave £55million extra just for this period to cover staff and make sure we had increases in staff and staffing levels.

‘I’ve actually asked NHS England to look at that particular case because that doesn’t sound to me like that’s an acceptable approach — people should be able to get an ambulance if they have a heart attack and that’s why we’ve put that extra funding in place, and why we’ve been building up our ambulance service over the last couple of years.’

Ms Keegan said critical incidents, which have been triggered by some NHS trusts in response to rising Covid admissions, were ‘part of the local contingency planning’ which ‘happens every winter, these are tried and tested plans’, adding: ‘We know this winter, they are going to be under extreme pressure, we know that.’

‘But on the other hand, if staff come back into hospital and are infectious, that’s completely counterproductive because that is going to mean more sickness in the hospital and for staff, so this can’t be led by politics or blind hope — it has to be led by the science.

‘If the science says it is possible for people to go back to work earlier, then of course NHS leaders will want that to be possible.’

He suggested that people in quarantine could test themselves on days three, four and five, and come out of isolation on day five if they test negative.

It is thought that only a small proportion of people would not be positive for Covid after five days in isolation.

The UK Health Security Agency recommended the reduction in self-isolation to seven days last month after finding it posed no greater risk of spreading the virus than completing the full ten days.

Scientists at the agency fear a further reduction could be ‘counterproductive’ because it could lead to staff returning to work while they are still infectious, and spreading it to other employees.

But evidence showing most people who catch the virus are not infectious from five days after symptoms develop has been available for months.

University of St Andrews’ scientists found in November 2020 that the vast majority of transmission occurs in the first five days after symptoms develop.

It comes as a staffing crisis sparked by the spread of Covid leaves hospital leaders in Greater Manchester no choice but to cancel some operations.

A spokesman said the cancellations were ‘temporary’, although cancer and heart surgery would be protected.

Chief executive of Bolton NHS Foundation Trust, Fiona Noden, said the cancellation was done ‘so we can keep people safe, can maintain the very best infection control measures, can make sure we deploy staff to where they’re needed most and can keep looking after people who need urgent and emergency care’.

The North West — where the hospitals are based — has seen the number of Covid patients in its wards surge 94 per cent over the last seven days to 2,618.

A GP in Oldham, one of the areas affected, warned today that the decision will lead to ‘more suffering’.

Dr Zahid Chauhan, who is also a Labour councillor for the area, told BBC Radio 4: ‘A non-urgent operation might be non-urgent for a hospital administrator or the state, but they are not non-urgent for the patient.

‘If you are waiting for a hip replacement, that means you are in pain, so it might be non-urgent for someone, but for the person who is suffering that is not non-urgent for them.’ 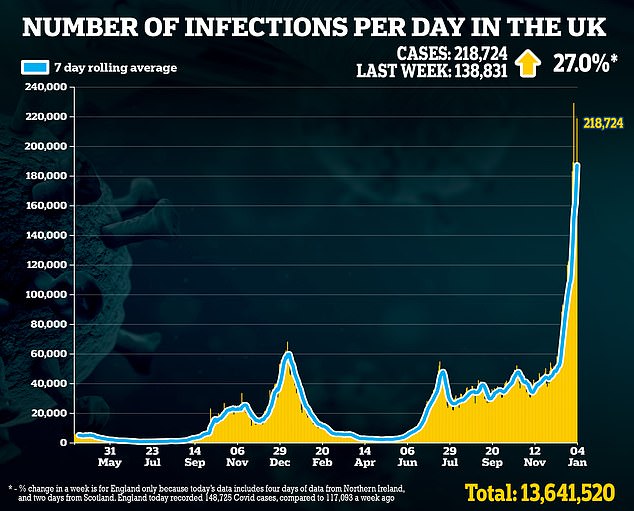 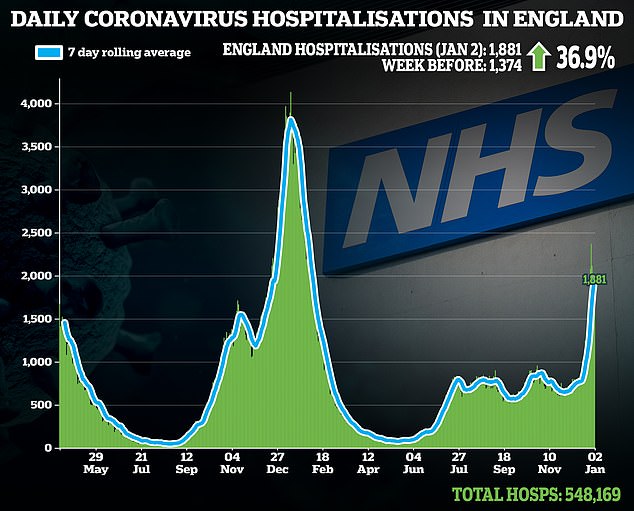 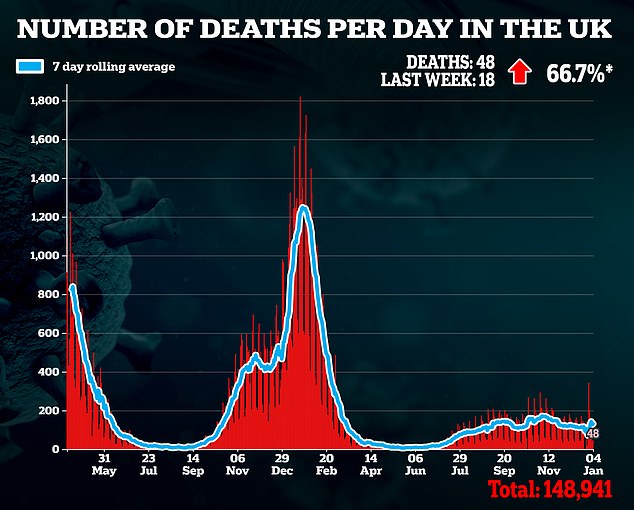 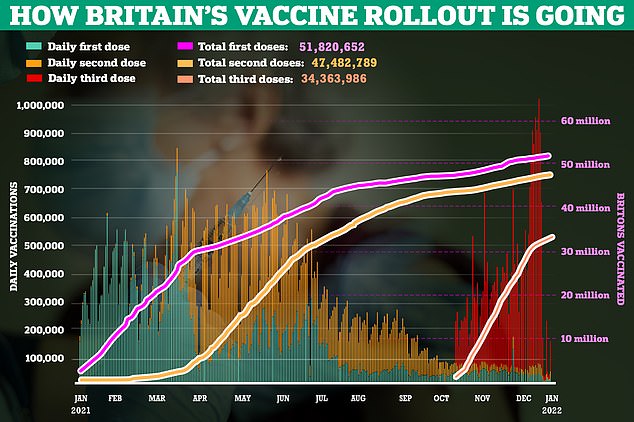 And there are mounting concerns that hospital trusts in Cumbria could also hit the panic button in response to rising pressures.

Colin Henderson, public health director for the county, said it ‘seems very likely’ that trusts in Cumbria will start to shelve non-urgent operations.

He said: ‘We always knew that January was going to be a tough month.

‘The case rates that we’ve seen so far with the rising hospitalisation rates and the large staff absences and the pressure on social care… are coming together to create a really difficult time for our health and care services.’

Several hospital trusts across the country have already declared critical incidents in response to pressures.

A critical incident allows them to start working with neighbouring NHS trusts to share the workload and avoid becoming overwhelmed.

Asked about the pressures faced by trusts, Ms Keegan said: ‘Right now, they are under extreme pressure with the Omicron variant, with the number of positive cases and the increase in hospitalisations, and at this point in time when they always have extreme pressure.

‘We knew that and we actually knew that going into this period — that’s why we’ve put an extra £5.4billion of investment to try and get extra staff, get some extra capacity to be able to put virtual wards in place, extra beds and extra capacity with the Nightingales, etc, all of which we anticipated, that this was going to be really difficult.

‘We’ve had two years of a pandemic, there is a build-up of people who haven’t come forward who need electives — there is a backlog we need to deal with — and then you have got the unknown of Covid — we now know we have Omicron — and also flu was a big unknown as well, how much flu we would have this year.

‘We always knew that this was going to be one of the most pressurised winters and they are doing an absolutely amazing job.

‘Part of one of the procedures we have with our NHS contingency and resilience plans is actually to declare this critical state, and then they will work with NHS regional colleagues and the local resilience forums to make sure that mutual aid is provided, or whatever support is required, so it is part of the escalation process.

‘These are tried and tested plans, we have these plans in place every winter.’