The live events industry has launched a hard-hitting campaign highlighting the turmoil its workers are going through,  and urging the Government to act now and safeguard the sector’s future.

The campaign, ‘The Government Can’t See Us, Can You?’ or #GovCantSeeUs, shows the devastation the coronavirus pandemic has wrought on the live events supply chain.

Professionals in the sector have shared their stories, revealing how much income they have lost – in many cases 100 per cent – and what Government support they have received, if any.

The #GovCantSeeUs campaign by the live events industry highlights the turmoil thousands of workers have been going through for the last 12 months, as most gatherings have been banned

The campaign comes as #WeMakeEvents – the group which represents the hundreds of thousands of freelancers, self-employed workers and company directors in the live events industry – revealed the results of a survey which suggested the sector was on the verge of collapse.

Pre-pandemic, the UK live events industry brought in more than £70billion a year to the UK economy and supported more than 700,000 jobs.

This includes those working across all types of live events, including theatre, music, corporate events, festivals, conferences and almost any form of organised gathering.

However, since the first national lockdown was enforced in March 2020, and live events were completely shut down, the vast majority of those working in the sector have faced some form of struggle.

The survey, which questioned over 2,800 businesses and individuals in the sector, found that 93 per cent had seen their income fall dramatically as a result of the pandemic.

Yet, 34 per cent of these individuals and businesses said they had received no form of financial aid either, be that Government loans, grants or even the furlough scheme.

This is partly because the events industry employs a lot of freelancers, who would not be eligible for schemes such as furlough.

As a result, 50 per cent of those surveyed reported having to take work outside of live events to supplement their income. A third had been forced to leave altogether, or said they were considering doing so very soon.

Meanwhile, 43 per cent of businesses in the live events supply chain said they didn’t have the resources to last until the summer.

As part of the campaign, #WeMakeEvents has also penned an open letter to Rishi Sunak ahead of next week’s Budget, sharing these figures and demanding the Government recognise the plight the sector is currently in.

It says the Government has ‘appeared blind’ to the issues facing the events industry and urges it to develop a plan for reopening, including Government-backed cancellation insurance. 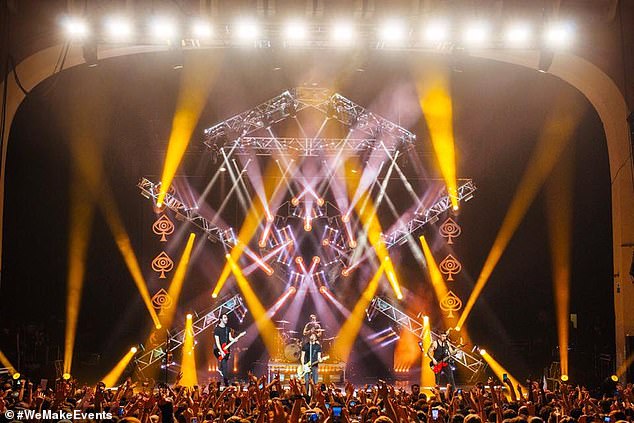 #WeMakeEvents open letter to Rishi Sunak asks for engagement to help the industry develop a plan for reopening, which it says should include Government-backed cancellation insurance

It reads: ‘The campaign focuses on the fact that the Government has frequently appeared blind to the existential issues facing the live event supply chain.

‘Thousands of highly-skilled individuals whose businesses and livelihoods have been seriously damaged have also been deemed ineligible for Government support.

‘While we are grateful for the support that you have made available so far during the pandemic, which has helped many, our entire sector has been unable to work due to Government social distancing restrictions so it is essential that we are all given access to adequate support.’

The group has asked to end the ‘unjust exclusion’ of certain freelancers, self-employed people and directors of small businesses from the Self-Employment Income Support Scheme and Coronavirus Job Retention Scheme.

It has also asked for further support in the form of 100 per cent business rates relief and one-off grants.

It added: ‘Once live events can safely reopen, we will do everything we can to rebuild our sector and make our contribution to the recovery of the UK economy.

‘However, we need your support now if that is going to be possible – only you can ensure we avoid collapse before reopening.’

‘We need Government support to keep our head above water’ 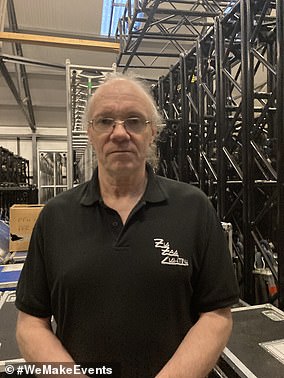 Neil Hunt is founder of ZigZag Lighting, a stage lighting supply company which supplies lighting to tours, shows and festivals across the country and even abroad.

He was halfway through a tour when live events were abruptly halted in March last year.

All subsequent events for 2020 were also cancelled, and this appears to be continuing for much of 2021.

The firm’s turnover has dropped by 98 per cent and all staff have been furloughed, though this is due to end soon.

Meanwhile, Neil’s application for the first round of the Culture Recovery Fund was turned down. He has applied for the second round, the outcome of which will be revealed in March.

He said: ‘Trying to survive without work has put immense pressure on us as a business and on me personally.

‘Initially, there was some optimism as we thought we could return to work last year. But that didn’t happen, and now it has been almost a year without work.

‘We really need support from the Government to help us keep our heads above water. Otherwise, there won’t be an industry for us to go back to.’

Commenting on Boris Johnson’s ‘Roadmap to recovery’ announced earlier this week, the campaign group said it welcomed the positive steps – but it also said that while it is indeed a roadmap to getting out of lockdown, it is not a roadmap to reopening the economy and that more clarity was urgently needed.

Duncan Bell, of #WeMakeEvents, said: ‘Before any event goes live, it takes many months of pre-production work and huge upfront financial investment – so it is essential that we have adequate warning of when live events can reopen.

‘We’ve been telling the Government this for almost a year, but yet again they have failed to see or hear our concerns’

Julian Knight MP, chair of the Digital, Culture, Media and Sport Select Committee, added: ‘It’s hugely disappointing that, almost a year since stages went dark, the skilled professionals making up our world-leading creative sector are still falling through the cracks of Government support.

‘The DCMS Committee continues to hear evidence on the severe impact the pandemic has had on those in live event supply chains, in our inquiry into the support needed to save the 2021 season of festivals.

‘I hope this serves as a catalyst to the Government taking the steps it so urgently needs to, including backing Covid-19 cancellation insurance.’

The UK hospitality sector has launched its own campaign calling on the government to extend the eviction moratorium for commercial premises by three months, and to provide a lifeline to the industry by giving businesses a two-year window in which they can repay 50 per cent of the rent they owe.

#GiveHospitalityABreak, led by property consultant Tony Lorenz, hopes for the creation of a Government-mandated starting point for talks between tenants and landlords to ensure neither group can be unreasonable in negotiations.

Without an extension to the commercial eviction moratorium, many hospitality businesses are now teetering on the edge with no prospect of new cashflow to pay outstanding bills.

Lorenz said operators and landlords needed to urgently find ways forward that worked for both of them, and that legislation would help catalyse that.

He said: ‘With no word from the government thus far, clarity is urgently needed to avoid bankruptcies, and the follow-on mass unemployment in the sector.’