Everyday products that cost MORE in the UK than the US

When forking out for pricey clothes and beauty products, it’s always worth shopping around to find the best deals.

But while you might save a few pounds by trawling through sales and discount sites, savvy shoppers can make a heftier saving my looking further afield.

Perfume from Marc Jacobs, MAC make-up and Levi’s jeans will all cost you more on British soil than in the US, according to new research shared exclusively with MailOnline FEMAIL.

So just how much more are us Brits paying for goods and services compared to the rest of the world? 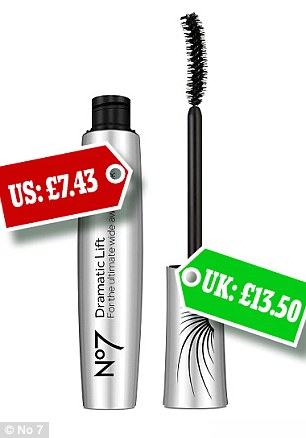 No. 7’s Airbush Away primer (left) and Dramatic Lift mascara (right) are both cheaper to buy abroad than in the UK

A team of financial experts at European challenger bank Revolut have trawled the internet to uncover the biggest price mark-ups on some of the UK’s most popular items – with one perfume costing a staggering 57 per cent more in the UK.

They found the biggest discrepancy was Marc Jacobs’ popular Daisy eau de toilette, which costs $49.99 (£35) compared to £55 in the UK for a 50ml bottle.

In many cases, it would be cheaper for Brits to buy their favourite products on US sites and pay for transatlantic shipping than to buy them on home soil.

MailOnline has contacted No. 7, MAC Cosmetics, Levi’s, Marc Jacobs and Zara for comment.

No.7 Airbrush Away primer

If you hop over to the US, you’ll be able to snap up a range of beauty products at a much cheaper price than you’ll find in the UK.

But the experts at Revolut claim one brand in particular is significantly cheaper across the pond: No7. If you wanted to buy its Airbrush Away primer in the UK, you would be looking to spend around £16.50 on the high-street. 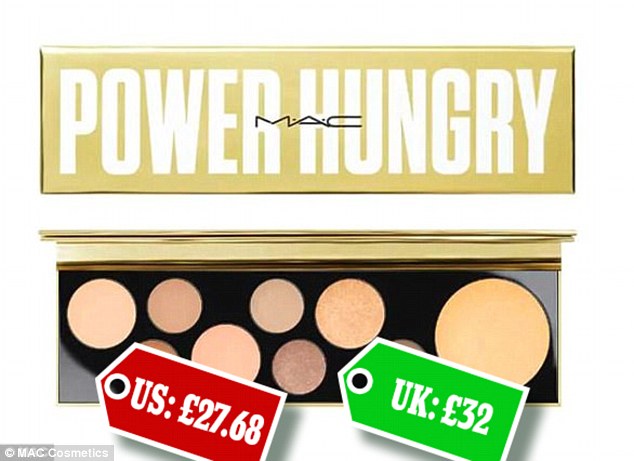 It’s not just basics such as mascara and primer; even luxe beauty palettes from the likes of MAC Cosmetics can be cheaper across the Atlantic.

Mac’s Power Hungry eye shadow palette costs $39.50 on its official US site, with VAT, which works out at £29.89 at the current exchange rate.

The price gap also applies to No.7’s Dramatic Lift Mascara (pictured above) which retails on the UK high-street for £13.50.

But if you were to buy this product in the States, you would be looking to spend the equivalent of around £7.00, or even £5.60 in the sale.

At popular US fashion retailer Target, for example, the exact same mascara is just $9.99 (£7.06) – almost half the amount UK shoppers are forking out. 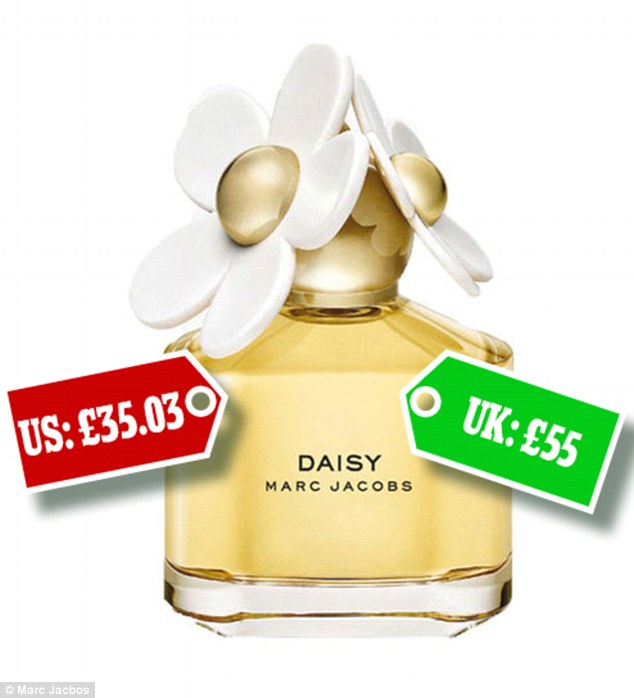 Iconic American brand Marc Jacobs’ popular Daisy perfume costs $49.99 (£35) compared to £55 in the UK for a 50ml bottle – proving it pays to shop around

Another item that can be snapped up for much less the USA is perfume. While it’s often possible for Brits to get a good price during the post-Christmas sales, in many cases we are still forking out way more than our friends across the pond, according to Revolut.

For example, Marc Jacobs’ Daisy eau de toilette costs around £55 for a 50ml bottle in the UK – whereas in the States, you can pick up the perfume for around £35 in their equivalent high-street retailer. 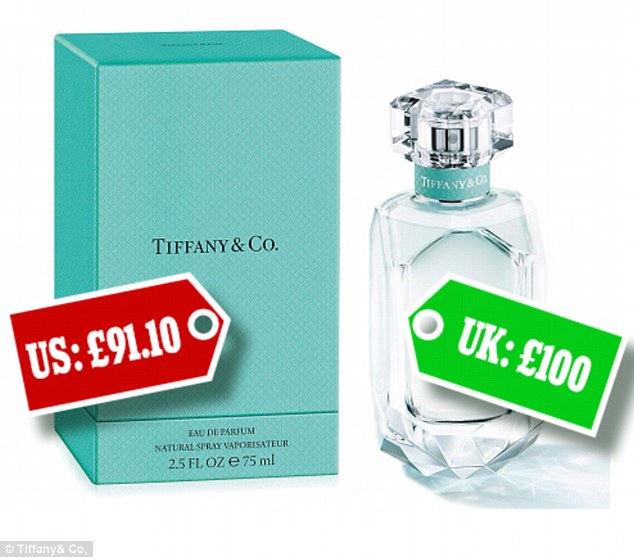 The popular scent from Tiffany & Co. costs the equivalent of £10 more in the UK than the US

In all, this makes the iris-infused scent a considerable 18 per cent more expensive for Brits. 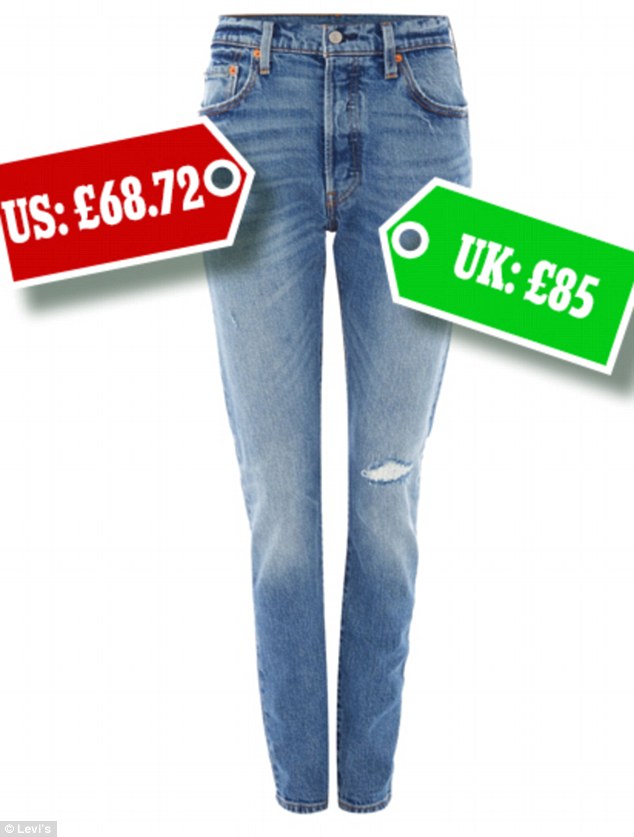 Levi’s classic 501 skinny jeans cost almost £20 more in the UK than the US, the study reveals

The average pair of Levi’s jeans in the UK will set you back around £72, but if you travel further afield, this price tends to slump to a much lower price. 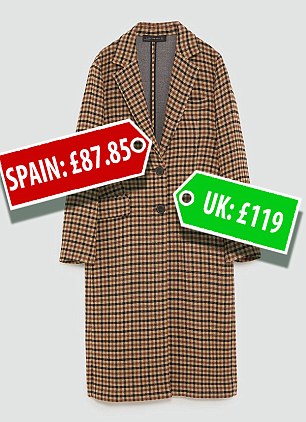 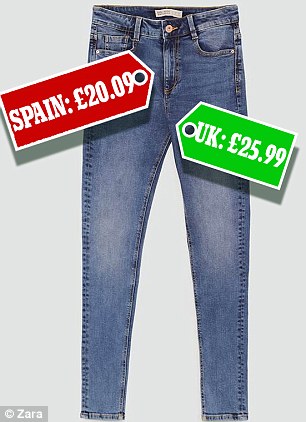 This stylish check coat (left) and casual skinny jeans (right) from Zara cost significantly more in the UK than in Spain, according to the latest research

Our European neighbours are saving hundreds when it comes to fashion too, it seems.

Fashion giant Zara, owned by Inditex, is known to charge more on many of its products in the UK than abroad.

Meanwhile, an identical pair of skinny jeans is marked up by more than 25 per cent, costing £5.90 more in the UK than in Spain.