Everything you need to know about celebrating New Year’s

New Year’s Eve fireworks are set to light up the sky across the country as the world bids 2017 farewell and prepares to welcome 2018.

As they say, the way you spend your New Year’ Eve is the way you’ll spend the rest of the year, so Daily Mail Australia has rounded up the best spots to catch the spectacular fireworks in each capital city.

We’ve also tracked down the best way to get to and from the celebrations and whether or not to pack your poncho for the big night.

NSW authorities have warned residents of significant road closures on New Year’s Eve throughout Sydney, including the Harbour and Anzac bridges.

The public is urged to use trains and buses rather than cars during the evening – more than 4500 extra public transport services will be running to and from the city as Sydney and the harbour are swamped with revelers celebrating the end of 2017. 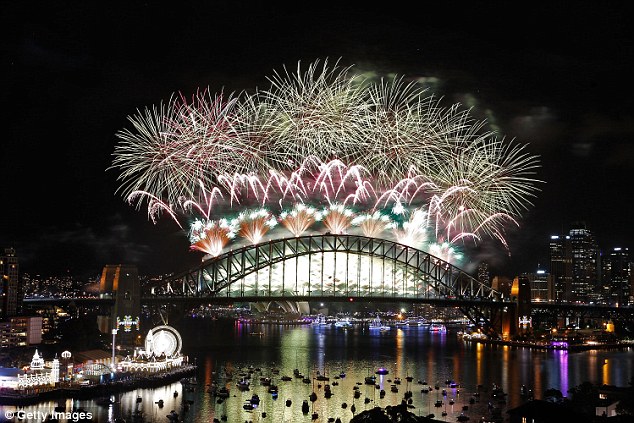 The Bureau of Meteorology forecasts a 50 per cent chance of rain in Sydney on Sunday, which could spell trouble for those planning to watch the fireworks in the Harbour.

The Roads and Maritime Services website explains that the show itself will proceed unless it is unsafe to do so – meaning at this stage it is unlikely the fireworks will be cancelled due to rain.

Sydney firworks have only been cancelled once back in 2003 due to dangerous wind.

But with no shelter in the queuing or event area, and no pass-outs permitted, those who turn up unprepared will be left feeling soggy and very sorry for themselves.

Finding a sheltered place to sleep at the end of the night will be crucial, as Sydneysiders are expected to be hit with more rain, and the chance of a thunderstorm. 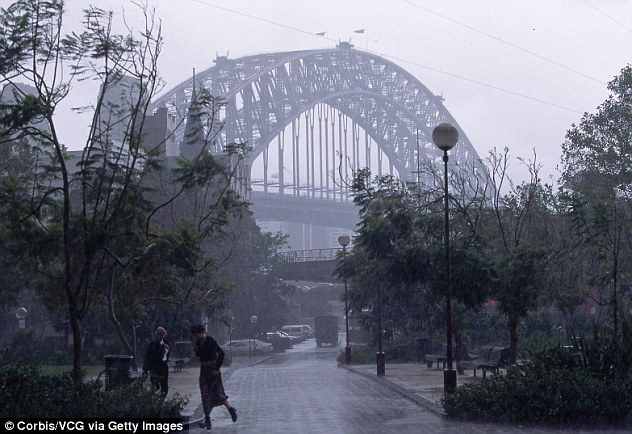 Some of the best spots include Flagstaff Gardens, Docklands, Kings Domain and Treasury Gardens.

According to Channel 7, Public Transport Victoria has controversially decided not to operate its Night Bus service on Sunday night.

Residents Altona Meadows, Mernda, Point Cook, Meadow Heights and Endeavour Hills will have more difficulty getting home than those who live closer to the city, and many may be forced to shell out for a premium Uber or taxi fare. 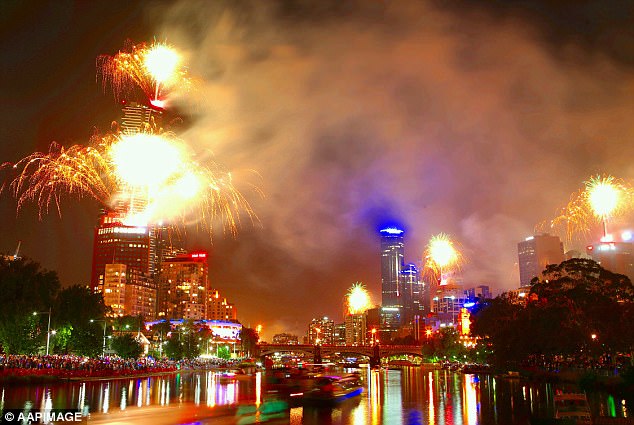 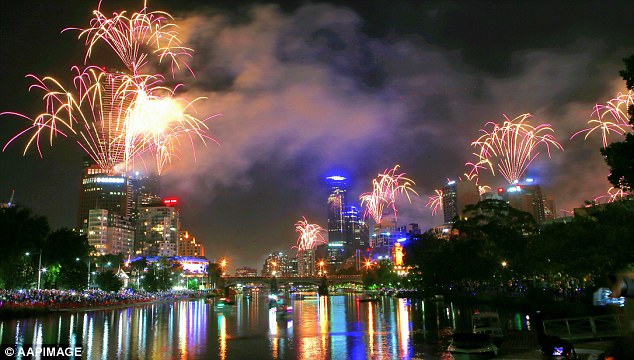 Revellers will need to rug up on New Years Eve, with temperatures hitting a minimum of 13 degrees.

Luckily, many of the city’s main events are held indoors, with huge dance parties and clubs with waterfront views expected to play host to many party-goers.

On New Year’s Day, the mercury will reach up to 23 degrees, but a slight chance of a shower could keep some people indoors.

Brisbane will hold fireworks displays at South Bank and on the Brisbane River, including Eagle Street Pier and Portside Wharf, with all three displays are set to run for 10 minutes.

Brisbane City Council will waive fees on tolls on the Go Between Bridge from 6pm Sunday to 2am Monday to ease traffic congestion, but have urged people to use public transport wherever possible.

Revellres planning a big night out would be well-advised to pack a poncho or a raincoat, as BOM predicts a high chance of evening showers. 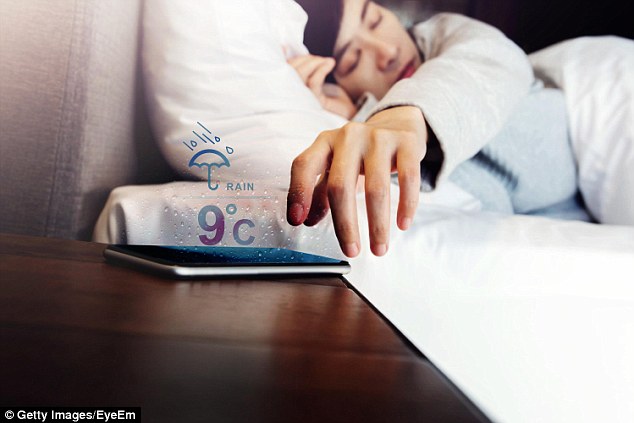 Warm weather is still expected, with temperatures to hit 30 degrees on New Year’s Eve, but with many of the city’s main events taking place outdoors, the rain could prove more than bothersome.

And while warm temperatures are expected again on New Year’s Day, an 80 per cent chance of rain will give those left weary after a big night out a great excuse to stay in bed.

All-ages concerts have been planned for Canberra to ring in the new year and food trucks will line Civic Square and a dance party will turn up the volume at Garema Place. Fireworks will be launched from City Hill at 9pm and midnight.

Spectacular fireworks exploding over Lake Burley Griffin are expected to be the centrepiece of Canberra’s New Year’s celebrations – but clouds could leave some with an obscured view.

The nation’s capital is expected to be cloudy, but warm on the 31st – with a miniscule chance of rain.

On New Year’s Day, the mercury will hit up to 29 degrees, but there is a 40 per cent chance of showers.

Plenty of family-friendly celebrations have been planned in Perth, with stilt walkers and ballerinas to take to the streets and a fireworks display to be held at 9pm, then midnight, at Northbridge.

But the hottest spots to mark the new year will be along the Swan River, as many private companies host parties and set off fireworks displays.

Normal Sunday timetabled services will operate on New Year’s Eve and additional services on selected routes before and after midnight. 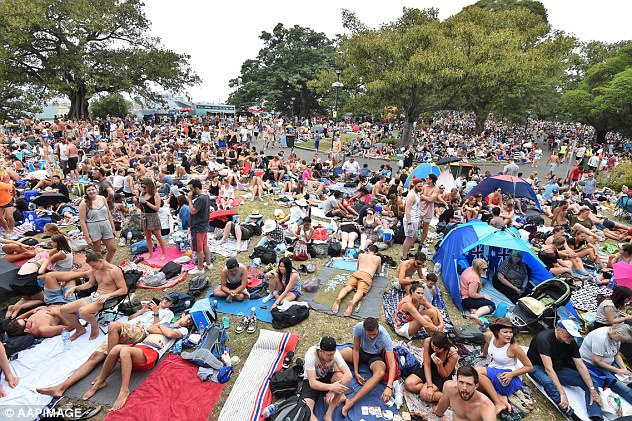 Those in Western Australia are the only ones to escape the wrath of a rainy New Year’s Eve – with sunshine and warm weather predicted for the last day of 2017.

Fireworks are expected to light up the skies throughout Perth, with barely a cloud in sight to block the view.

On New Year’s Day, a long night out might best be dealt with through a trip to the beach, as the temperature hits up to 33 degrees.

Head to Darwin Waterfront for a big concert to ring in the new year, with musicians, children’s entertainers and food stalls for families viewing the 9pm fireworks and late-night revellers watching the midnight display.

Free public buses will operate around Darwin and Palmerston so those partying can safely attend celebrations.

Buses will operate from 7pm on 31 December to 7am in the morning of 1 January. 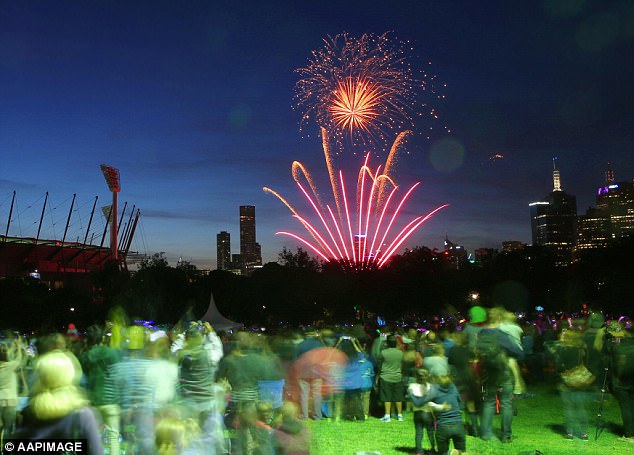 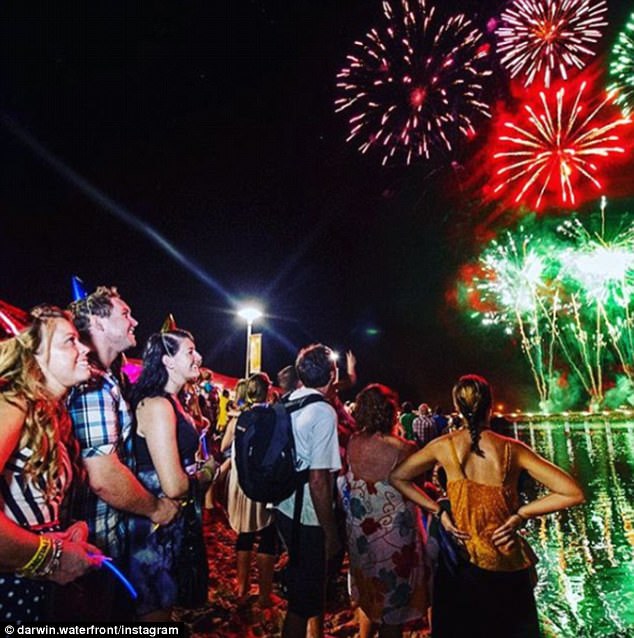 But those expecting a fun night out by the water could be in for some disappointment as a chance of showers and a prediction of clouds will dampen the fireworks display at the Darwin Wharf and Harbour.

But warm weather on New Year’s Eve and New Year’s Day may see residents overcome their worries – and perhaps their hangovers on January 1 – and party their troubles away.

Hobart’s Taste of Tasmania festival will be the main event on New Year’s Eve, but the festival’s prime vantage point comes at a cost of $65 per ticket.

To get a good view of fireworks without the cost, people can head to Constitution and Victoria Docks where the Sydney to Hobart yachts are moored.

Metro will operate late night services in Hobart, Launceston and Burnie this NYE, with $2 flat fares available from 6pm.

From 10pm, most buses to the eastern shore and Northern Suburbs will commence from special bus stops in Salamanca Place (near the Supreme Court), then proceed to the Hobart Bus Interchange. 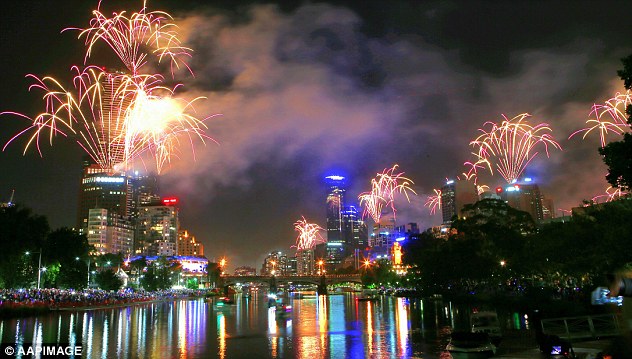 On January 1, Hobart will likely see rain, and temperatures are expected to  drop below 20°C 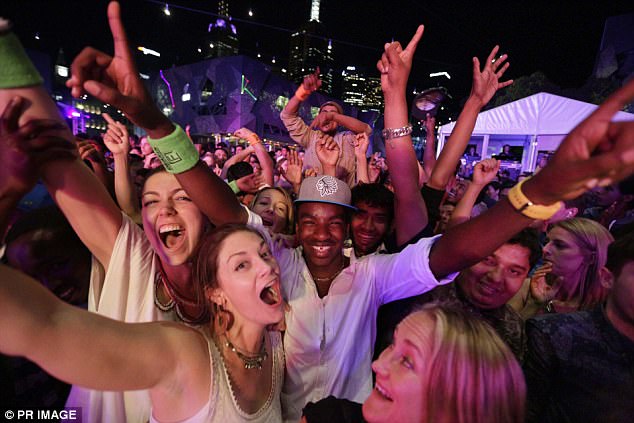 A sunny Hobart will be awash with sailors, revellers and yacht enthusiasts on New Year’s Eve

In Hobart, many of the yachts sailing in the Sydney to Hobart Boxing Day race will have docked, meaning the population will rise with sailors and fans.

Fireworks will light the sky over Sullivan’s Cove along the Derwent River – and a sunny day should provide decent viewing for the masses.

A poncho will be necessary packing for those who want to be prepared for anything, as BOM predicts a 20 per cent chance of rain.

On New Year’s Day, the chance of showers will increase to 60 per cent, and the mercury will drop below 20 – great news for anyone looking to turn off the world for a day.

Elder Park in Adelaide is expected to draw the biggest crowd with thousands also likely to flock to the seaside at Glenelg and to Victor Harbor, south of the city.

The Elder Park celebrations in the city will kick off from 6pm on Sunday and feature local music, food from around the world, a new kids zone and two fireworks displays.

Adelaide Metro will be offering all revellers free public transport after 5pm up until dawn on New Year’s Day.

In the country’s south, the city will be under a cloud for the night of festivities, which could prove frustrating for those who plan on heading to the River Torrens for fireworks.

The Bureau of Meteorology predicts temperatures up to 26 on the day, with winds reaching up to 20km/h during the afternoon. January 1 will also be marred by clouds, with some light showers expected.