EVERYTHING you need to know about today’s ambulance strike

But which staff are taking to picket lines? How many workers are striking? And will heart attack patients still be taken to hospital by 999 crews?

MailOnline answers all your questions on today’s strikes.

Ambulance strikes begin today after up to 100,000 nurses staged walkouts yesterday, as the NHS faces its biggest ever co-ordinated industrial action

How many staff are striking?

Up to 25,000 ambulance workers across nine NHS trusts in England and Wales could strike today.

Among the staff staging walkouts are paramedics, emergency care assistants and call handlers.

The GMB, Unison and Unite have co-ordinated the action.

Strikes are also planned on December 28, although that will involve only GMB members.

Which areas will be affected?

The GMB said up to 10,000 of its paramedics, emergency care assistants and call handlers will strike at nine ambulance trusts.

Up to 15,000 Unison members will walk out at five ambulance trusts.

And Unite said more than 1,600 of its members will join the industrial action at three ambulance trusts.

The only NHS ambulance trust to remain unaffected will be East of England. The Isle of Wight won’t be affected by today’s action.

How long will the strikes last?

Strike action will last for up to 24 hours, with some picket lines planned until 6am tomorrow. However the exact strike times will vary between ambulance trusts.

No other strikes have been announced yet.

Although, union bosses could order more unless the Government caves into their demands.

What do ambulance workers earn?

The Government says most ambulance staff have received a pay rise of at least four per cent, taking their average basic pay to £34,300.

Unions say, however, the basic salary for a call handler is no more than £23,000 and the government website says the starting wage for a paramedic is £25.655.

What do the unions want?

The unions voted to strike in a dispute over the Government’s 4 per cent pay award.

Unite says it wants a pay rise ‘in line with the cost of living’.

GMB wants a ‘catch-up settlement’ for its staff that restores ‘a decade of lost earnings and a retention package that properly rewards existing’.

Meanwhile, Unison wants an above-inflation pay rise. That would, at this moment in time, amount to at least 11 per cent. 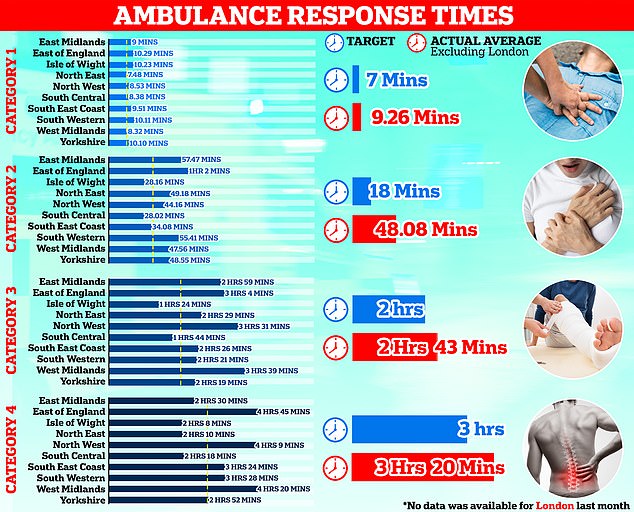 Around 25,000 ambulance workers across nine NHS trusts in England and Wales go on strike today and again on December 28

Is the Government negotiating?

Health Secretary Steve Barclay has so far refused to commit to discussing pay with unions.

He has, however, met with them in order to thrash out last minute agreements on patient safety.

The nursing union, which orchestrated its own walk-outs, has hinted that it would be wiling to compromise on its demands of 19 per cent pay rises.

But on Monday, Unison boss Christina McAnea said just agreeing to come to the table would now be insufficient.

She argued a ‘firm commitment’ and ‘change in attitude’ would be required for the unions to consider calling off the strikes.

How will patients be disrupted?

In some instances, unions have agreed to allow staff to attend only life-threatening incidents where a person’s heart has stopped or they are not breathing. These are known as category one calls and should be responded to within seven minutes, on average.

Others claim it will be down to individual members to decide if they wish to offer a more comprehensive service.

It raises the prospect that some heart attack and stroke patients may not be picked up. Such calls are classified as category two, and should be responded to within 18 minutes, on average.

Patients in category three – typically including falls – and category four are unlikely to be sent an ambulance during the strikes and could be told to make their own way to hospital or seek care elsewhere.

Category four calls can include diarrhoea and vomiting.

Patients who rely on NHS ambulances to transport them to hospital appointments may also be forced to make alternative travel arrangements.

Military personnel are being drafted in to provide support on ambulance calls during the strike but will not be allowed drive ambulances on blue lights for the most serious calls or provide treatment. 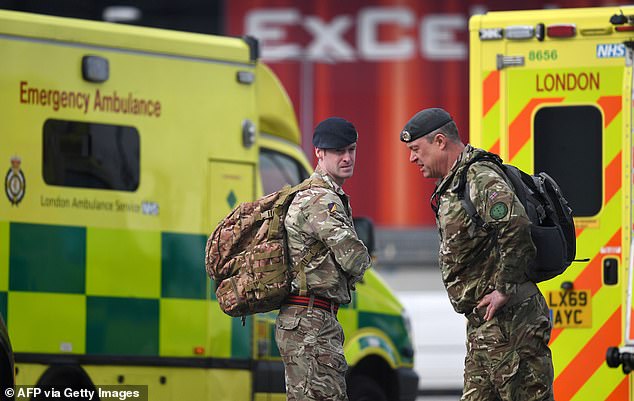 The Department of Health has said you should still call 999 in an emergency.

However, people dialling 999 may face a longer wait to get through to a call handler but calls will be diverted to other regions if necessary to limit delays.

Calls will be triaged as usual.

Health minister Will Quince urged people to stay safe during today’s strike, telling BBC Breakfast yesterday: ‘Where people are planning any risky activity, I would strongly encourage them not to do so because there will be disruption on the day.

‘But the key thing is for anybody that does have an emergency situation or a life-threatening situation that they continue to call 999 as they would have done previously, and for any other situation, NHS 111 or NHS 111 online.’

Now junior doctors are set to join nurses and ambulance workers in historic walkouts as fresh pay row emerges: NHS will ‘grind to a halt’ as experts fear lives may be put at risk