An undiscovered world may be lurking in the outer reaches of the solar system.

Astronomers have debated whether an elusive ninth planet orbits beyond Pluto for years, but a new study may finally prove the mysterious world is real.

Researchers have spotted a distant rocky object that they suggest was pushed into an ‘extraordinary orbit’ by the gravitational pull of an uncharted planet.

They say that their finding bolsters the ever-convincing case that a so-called ‘Planet Nine’ exists.

An undiscovered world may be lurking in the outer reaches of the solar system. Astronomers have debated whether an elusive ‘Planet Nine’ (artist’s impression) orbits beyond Pluto for years, but a new study may finally prove the mysterious world is real

Planet Nine was first theorised by experts at Caltech in 2016 when they spotted that a group of icy objects on the edges of the solar system have tilted orbits.

They suggested the orbits of these lumps of ice – so-called Trans-Neptunian objects (TNOs) – were warped by the gravitational pull of a ninth planet in the solar system.

The objects had elliptical orbits that pointed in the same direction and were tilted 30 degrees ‘downward’ compared to the plane in which planets circle the sun.

While Planet Nine has never been spotted, a number of astronomers – including scientists at Nasa – have since released research that supports the theory.

In a new paper a group of experts led by the University of Michigan describe a distant object that they spotted in 2014 that could be as large as a dwarf planet.

The rocky body, dubbed 2015 BP519, peaked the team’s interest because its orbit is unusually tilted away from the plane that most objects that orbit the sun lie. 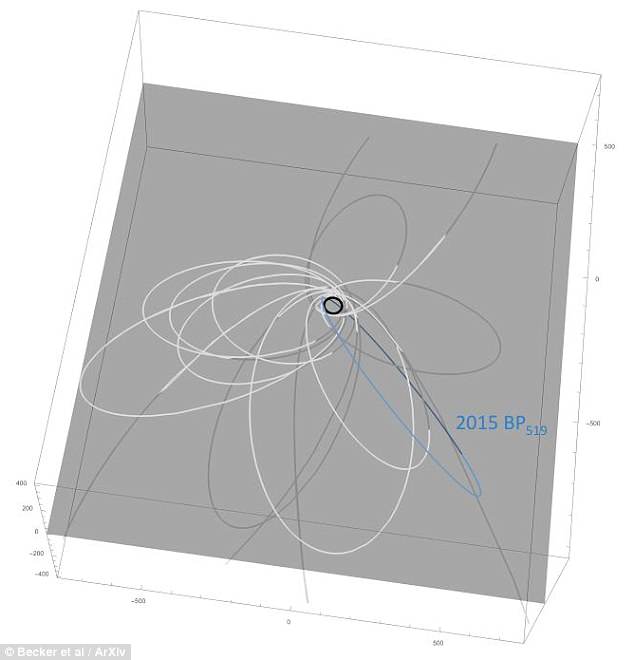 This image shows the orbit of 2015 BP519 (blue) as well as other TNOs as comparisons. For each orbit, the darker regions on the curve show where an object falls below the plane of the solar system. 2015 BP519 has the highest inclination of any extreme TNO discovered to date

They used computer simulations of the solar system to explore how this strange trajectory may have arisen.

Simulations where our star system had eight planets did not reproduce 2015 BP519’s tilted orbit.

When researchers added a ninth planet that matched the properties of those proposed by the Caltech researchers, the simulation reproduced 2015 BP519’s current orbit almost exactly.

‘It’s not proof that Planet Nine exists,’ Professor David Gerdes, an astronomer at the University of Michigan and a co-author on the new paper, told Quanta.

WHAT IS MYSTERIOUS PLANET 9?

‘But I would say the presence of an object like this in our solar system bolsters the case for Planet Nine.’

The study adds to piling evidence for the existence of Planet Nine, though astronomers remain latched to their telescopes in search of the object.

In October 2017 Nasa weighed in on the debate, highlighting five different lines of evidence pointing to the existence of the object.

It said that imagining that Planet Nine does not exist generates more problems than it solves. 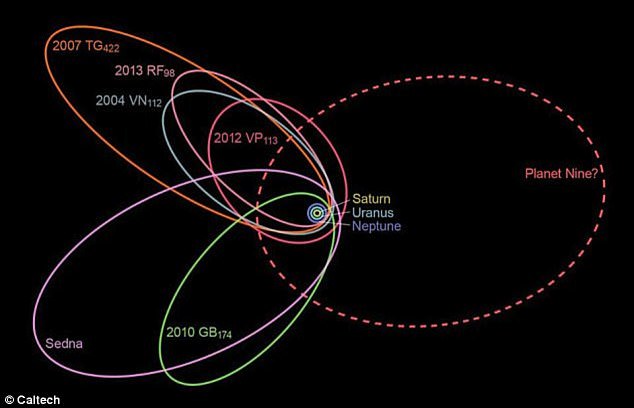 In 2016, researchers examined the orbits of six objects in a distant region of icy bodies stretching beyond Neptune. The objects had orbits that point in the same direction and are tilted 30° ‘downward’ compared to the solar plane in which the eight planets circle the sun

Dr Konstantin Batygin, a planetary astrophysicist at Caltech in Pasadena, whose team is closing in on finding Planet Nine, said: ‘There are now five different lines of observational evidence pointing to the existence of Planet Nine.

‘If you were to remove this explanation and imagine Planet Nine does not exist, then you generate more problems than you solve.

Researchers are now using the Subaru Telescope in Hawaii in the hopes of finding Planet Nine, and hope that its detection will also shed light on its origin.

In 2016, Dr Batygin published a study that examined the orbits of six objects in the Kuiper Belt – a distant region of icy bodies stretching from Neptune outward toward interstellar space.

His findings revealed that the objects all had elliptical orbits that point in the same direction and are tilted 30 degrees ‘downward’ compared to the plane in which the eight planets circle the sun.

To investigate this further, the researchers used computer simulations of the solar system with Planet Nine included, and showed that there should be more objects tilted at 90 degrees to the plane of the eight planets. 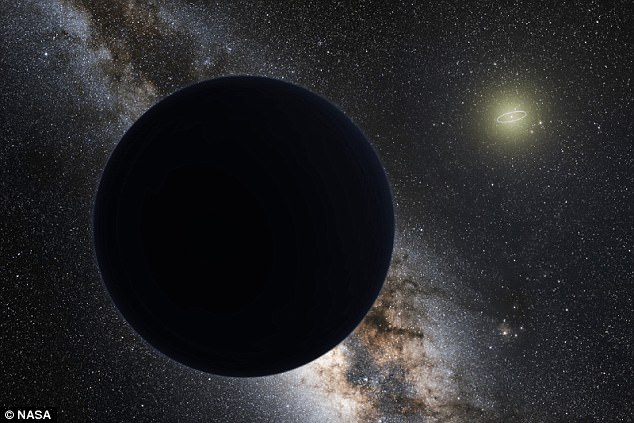 Researchers now hope to find Planet Nine (artist’s impression) using the Subaru Telescope at Mauna Kea Observatory in Hawaii, which they describe as the ‘best tool’ for the job

The team realised that five objects already known to astronomers fit the bill.

A second article by Dr Batygin’s team, led by Ms Elizabeth Bailey, showed that Planet Nine could have tilted the planets of our solar system during the last 4.5 billion years.

Dr Batygin said: ‘Over long periods of time, Planet Nine will make the entire solar-system plane precess or wobble, just like a top on a table.’

Finally, the researchers demonstrate how Planet Nine’s presence could explain why Kuiper Belt objects orbit in the opposite direction from everything else in the solar system.

Dr Batygin said: ‘No other model can explain the weirdness of these high-inclination orbits. It turns out that Planet Nine provides a natural avenue for their generation.

‘These things have been twisted out of the solar system plane with help from Planet Nine and then scattered inward by Neptune.’

The researchers now hope to find Planet Nine itself using the Subaru Telescope at Mauna Kea Observatory in Hawaii, which they describe as the ‘best tool’ for the job.

Dr Batygin added: ‘I think Planet Nine’s detection will tell us something about its origin.’