‘Evil spirits’ of racism and anti-Semitism are re-emerging, Germany and Israel’s presidents warn

The ‘evil spirits’ of racism and anti-Semitism are re-emerging, Germany and Israel’s presidents warned today as they marked the 75th anniversary of Auschwitz’s liberation.

President Frank-Walter Steinmeier said Germans had a responsibility to never forget their Nazi past and to stop hatred from spreading, at a special parliamentary session in the Bundestag.

‘The evil spirits of the past are reappearing today under a new guise,’ he said. ‘More still, they are presenting their ethno-nationalist, authoritarian thinking as a vision, as a better answer to the questions of our time.’

Israeli President Reuven Rivlin echoed those concerns in his own speech, warning that Europe was being ‘visited by ghosts from the past’.

President Frank-Walter Steinmeier said Germans had a responsibility to never forget their Nazi past and to stop hatred from spreading, at a special parliamentary session in the Bundestag (pictured: the president addressing the Bundestag today) 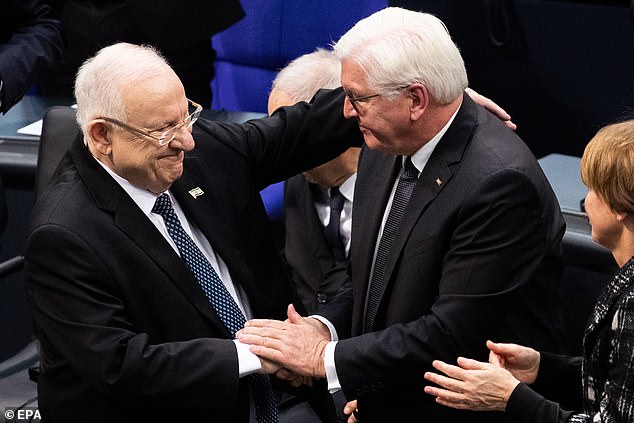 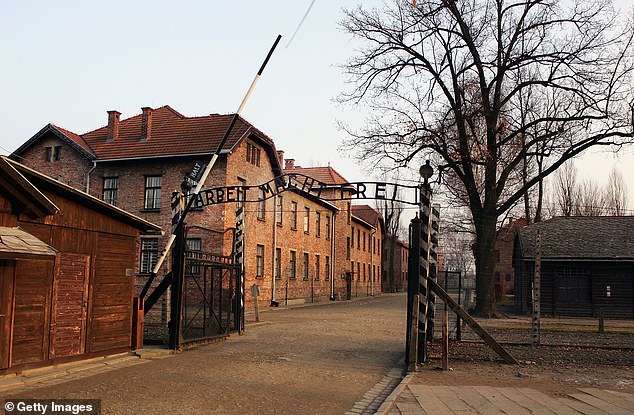 ‘Ugly and extreme anti-Semitism is hovering over the whole of Europe,’ Rivlin told German lawmakers.

Both men were speaking after attending high-profile anniversary events in Jerusalem and at Auschwitz-Birkenau in Poland in recent days.

The solemn occasions were dominated by fresh fears over the safety of Jews in Europe, more than seven decades after the Nazis murdered over six million Jews during World War II.

Sitting in the audience in Berlin were MPs from the far-right AfD party, whose leaders have openly railed against Germany’s remembrance culture and its ongoing atonement for the atrocities committed under Adolf Hitler’s Nazi regime.

Leading AfD lawmaker Alexander Gauland in 2018 described the Nazi era as ‘a speck of bird shit’ in German history. 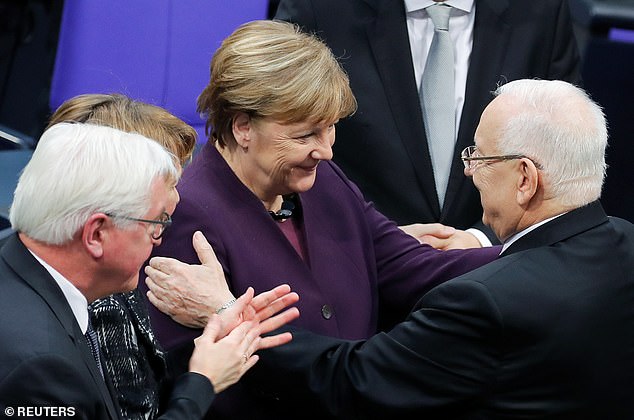 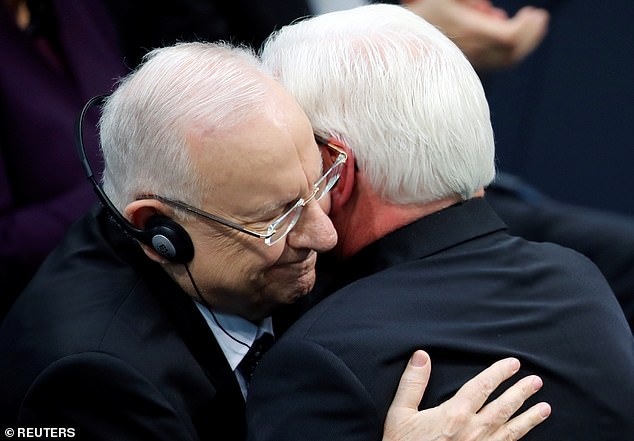 Israeli President Reuven Rivlin embraces with German President Frank-Walter Steinmeier during the commemoration service of the victims of the Nazi dictatorship, in the Bundestag in Berlin 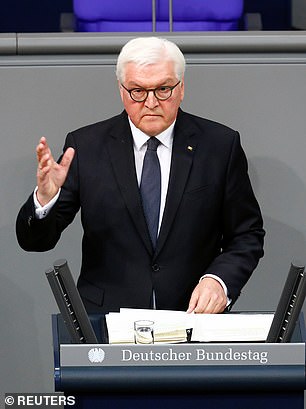 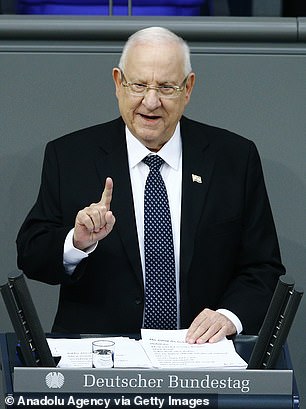 ‘The evil spirits of the past are reappearing today under a new guise,’ Steinmeier (left) said, while Rivlin (right) told parliamentarians Europe was being ‘visited by ghosts from the past’

Rivlin was only the second Israeli president to speak at the German parliament’s annual remembrance event, after Shimon Peres in 2010.

Peres used his speech at the time to issue an emotional plea for the world to bring the remaining perpetrators of Nazi crimes to justice.

But faced with a dwindling number of people who lived through World War II, attention is shifting to making sure that the horrors of the Holocaust are not forgotten.

On the eve of their Bundestag speeches, Rivlin and Steinmeier visited a centuries-old Jewish secondary school in the German capital.

‘We have the fourth, fifth and sixth generation after the Holocaust and World War II,’ Rivlin told students.

‘Now we have to find a way to let you, and to let your children know what happened, and prevent it from happening again.’

Steinmeier urged young people to complement their history lessons with real-life ‘experiences’ by travelling to Israel and visiting concentration camps like Auschwitz, where 1.1 million people were killed. 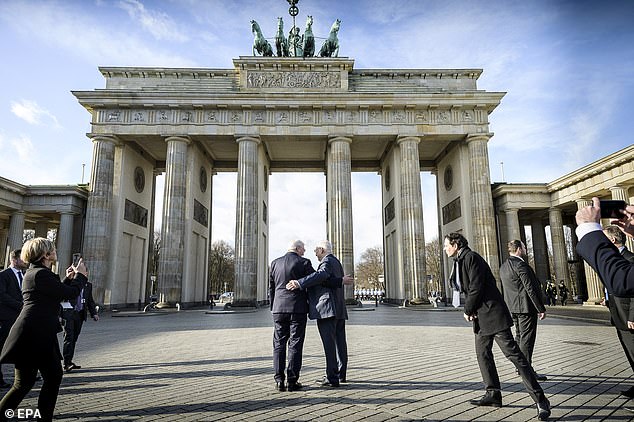 Steinmeier and Rivlin embrace in front of the Brandeburg Gate in Berlin, Germany, on Tuesday 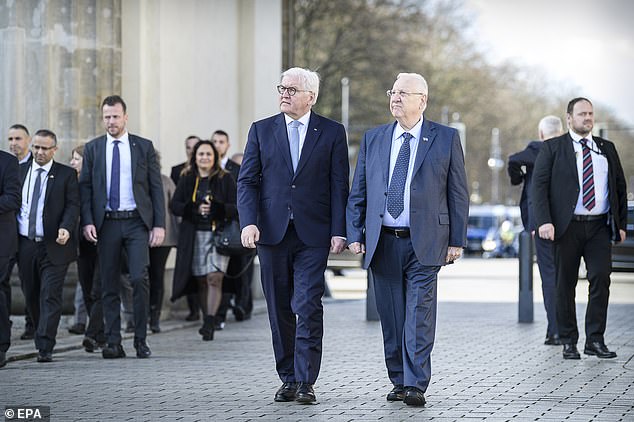 The German president, who serves as a kind of a moral arbiter for the nation, also voiced concern about the ‘very negative influence’ of social media.

He said his speech at Israel’s memorial event last Thursday, in which he urged Germans to confront their past, attracted an ‘unbelievable’ amount of negative reactions on Facebook.

Alarm about anti-Jewish hatred has catapulted to the top of Germany’s political agenda after a suspected neo-Nazi gunman tried to storm a synagogue filled with worshippers in the city of Halle in October.

After failing to break down the door, he shot dead a female passer-by and a man at a kebab shop instead.

According to government figures, Germany recorded 1,799 anti-Semitic offences in 2018, up nearly 20 percent on the year before. Of those, 69 were classed as violent attacks.

German Foreign Minister Heiko Maas warned this week that nearly one in two Jews has considered leaving the country. 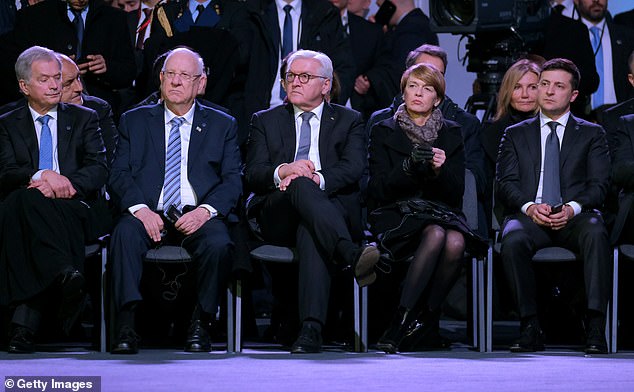 Rivlin (second from left), Steinmeier (centre), German First Lady Elke Buedenbender and Ukrainian President Volodymyr Zelensky attend the official ceremony to mark the 75th anniversary of the liberation of the Auschwitz concentration camp at the Auschwitz-Birkenau site on Monday 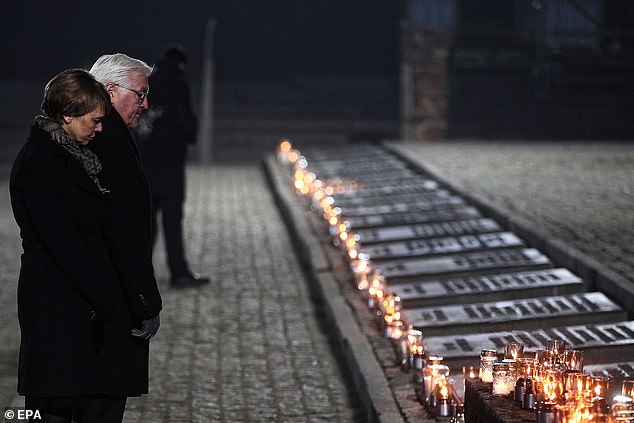 Germans ‘bear the responsibility of making everyone feel safe at home in Germany and in Europe’, Merkel said recently.

As a close diplomatic ally, Germany treads carefully when commenting on Israeli politics.

‘Only a negotiated two-state solution, acceptable to both sides, can lead to a lasting peace between Israelis and Palestinians,’ Maas said.