Australia’s top footy stars may be used to scoring big on the field.

But for many AFL greats and their wives, winning the game of marriage has proven far more difficult.

The glittering world of Aussie rules has witnessed a slew of failed relationships in recent years, with some of the game’s most glamorous couples parting ways in acrimonious circumstances.

From Nathan Buckley’s split from wife Tania Minnici – the woman credited with starting the WAG phenomenon – to Jimmy Bartel delisting Nadia Coppolino, here are some of the league’s most shocking break-ups.

Something in the water: Inside the recent bitter breakups of the AFL’s famous golden couples – after Nathan Buckley and Tania Minnici split in December. Pictured on September 25, 2017, in Melbourne

Collingwood head coach Nathan Buckley and his wife, Tania, became the latest AFL couple to call it quits when they confirmed their long-rumoured separation last week in a statement posted on Instagram.

Once known for their show-stopping red carpet appearances and seemingly rock-solid marriage, the pair shocked fans last Friday when they confirmed they’d secretly parted ways 11 months ago, after 18 years of marriage.

In a statement posted to Tania’s Instagram, the Buckleys confirmed they’d broken up in January, and have since been co-parenting their two sons, Ayce, 12 and Jett, 14.

‘It has been a tough and challenging year for every family and for ours included,’ the statement read.

‘It is with the utmost of love and respect for each other and a true commitment to our sons, that we made a decision to separate in January.

‘We remain dedicated parents and in the interests of our boys, we ask for our family to be given the privacy that is needed.

‘We thank everyone in advance for understanding our request and for the unconditional love and support we have received throughout our marriage.’

After the Magpies crashed out of the AFL finals in Queensland, Nathan, 48, moved out of the family home when he returned to Melbourne.

He is reportedly now staying at an apartment in South Yarra, which is owned by his friend Paul Roberts, a TLA sports executive. 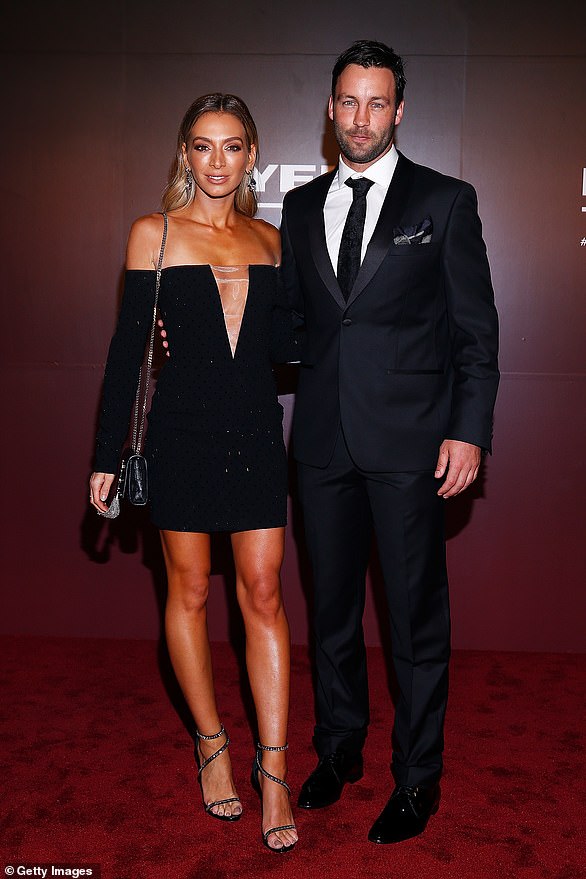 High-profile split: The AFL’s most talked-about split in recent years is arguably that of retired Geelong Cats star Jimmy Bartel and his wife, Nadia Coppolino. Pictured on February 16, 2017, in Melbourne

The AFL’s most talked-about split in recent years is arguably that of retired Geelong Cats star Jimmy Bartel and his wife, Nadia Coppolino.

For years the Brownlow Medal winner, 37, and the fashion designer, 35, were known for their Hollywood looks and seemingly picture-perfect family life.

But their fairytale marriage came crashing down in mid-2019, when the Bartels announced their separation after five years of marriage.

Nadia announced their separation on August 15 last year, but they are believed to have actually split two months earlier.

The Bartels first met at Melbourne’s F1 Grand Prix in 2008 and tied the knot on the Bellarine Peninsula in February 2014.

Reflecting on her marriage breakdown, Nadia recently told Stellar magazine: ‘This is never what I thought would happen. Every day is tough.

‘I was at the hardest point in my life and then to have articles written that weren’t true, and to have hundreds of hateful [comments] on Instagram and the continual pounding… it was difficult.’

At the time, she said her main priority was her children: ‘I want my boys to be aware of their feelings. And if they are feeling a certain way, they can show that feeling. 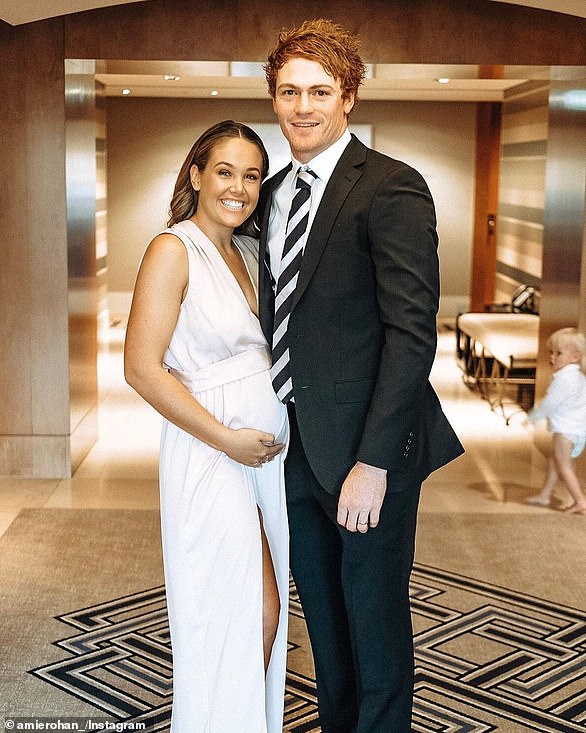 Sad split: Last year saw another Geelong player make headlines for all the wrong reasons. Fans were stunned when it was reported that Gary Rohan had split from his wife, Amie, just months after she’d given birth – and two years after losing one of their twins

Last year saw another Geelong player make headlines for all the wrong reasons.

Fans were stunned when it was reported that Gary Rohan had split from his wife, Amie, just months after she’d given birth – and two years after losing one of their twins.

Meanwhile, Amie stayed at home on Victoria’s Bellarine Peninsula with their young daughters.

He has reportedly moved on with a club staffer, which has supposedly caused angst in the locker room.

The Rohans had married in October 2016 on Hamilton Island, several weeks after Gary played in the AFL Grand Final for his former club Sydney Swans.

In November, Amie uploaded a cryptic Instagram post about ‘being strong’ despite the hurtful ‘actions of another’.

‘Please be strong in who you are and please don’t let the actions of another convince you that you are not good enough as you are,’ it read.

Her heartbroken post was in stark contrast to what she’d posted on her wedding day four years ago: ‘What a day it was finally marrying the man of my dreams, my soulmate, my best friend.’

Gary and Amie welcomed twin girls Bella and Willow in April 2018, but the joyous occasion was marred with sadness when Willow died five hours after she was born.

Willow was diagnosed with anencephaly, a congenital disorder in which a major part of the baby’s brain fails to develop.

They made the move from Sydney to Geelong later in 2018 and welcomed their second daughter, Sadie Rose, in March this year.

‘We welcomed our little daughter into this crazy world yesterday. Sadie Rose Rohan born at 8.27am weighing a petite 2970 grams,’ Gary wrote on Instagram at the time. 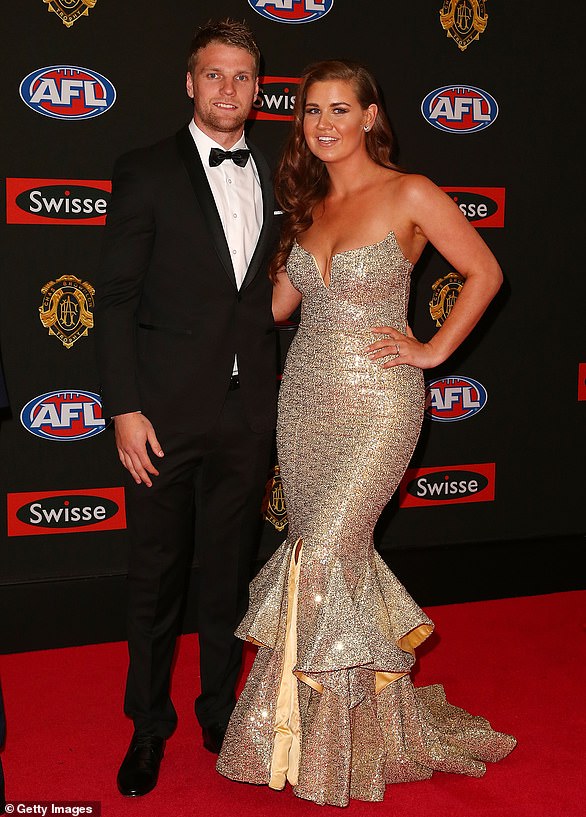 Case of the ex: Essendon Bombers star Jake Stringer went through a bitter split from his high school sweetheart Abby Gilmore in 2016. Pictured on September 28, 2015, in Melbourne

The pair, who were previously engaged to be married, later became embroiled in a public feud that was splashed across the Melbourne tabloids.

Abby, a controversial mummy blogger and Instagram influencer, recently admitted that her life had spiralled out of control following the split.

She told the Fearlessly Failing podcast in May that her family had been forced to stage ‘a bit of an intervention to get me some help’.

‘I was very much like, “I’m fine” and “I don’t need it”. I was going out every weekend and drinking myself silly,’ she explained.

Abby’s father and sister tried to talk to her about her partying, but she would just get ‘really angry’ whenever anyone raised the issue.

It wasn’t until her mother stepped in and told her she needed professional help that she finally relented.

In 2018, Abby raised eyebrows by taking a public swipe at Jake on Instagram by editing him out of a throwback picture from the 2015 Brownlow Medal.

‘Just your yearly reminder that I was fortunate enough to attend [the Brownlow] once,’ Abby wrote in the caption.

She is now in a relationship with Leighroy Wellington, and the couple share a one-year-old son, Mason James. 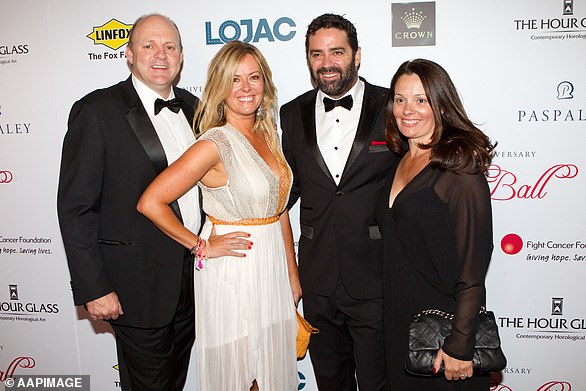 Love triangle: One of the most dramatic break-ups in AFL history involved Geelong veteran Billy Brownless (left) and his ex-wife Nicky (second from left), who had an affair with his friend Garry Lyon (second from right). Right: Garry’s ex-wife Melissa Lyon. Pictured on October 20, 2012, in Melbourne

One of the most dramatic break-ups in AFL history involved Geelong veteran Billy Brownless and his ex-wife Nicky, who had an affair with his friend Garry Lyon.

Garry, a former Melbourne captain, blindsided Billy in 2016 by starting a relationship with his wife of 18 years, just 12 months after they had separated.

After the scandal made headlines, Billy revealed how the affair had impacted his family, saying ‘a good mate wouldn’t do that’.

He also confessed that Garry and Nicky’s secret relationship could have been going on for up to four years.

‘I couldn’t believe it. I found out three or four months ago. I asked Garry and Nicky earlier on what is going on and they said they were just good friends. That’s what hurts the most,’ Billy said on The AFL Footy Show.

‘By law it’s legal. Morally it’s wrong. We all know our rights and wrongs. You don’t touch a man’s wallet, you don’t touch his wife.’

Billy and Garry had been friends for 15 years and worked together on the popular AFL Footy Show between 2009 and 2015.

In September this year, Billy revealed the two men had settled their differences.

Billy told the You Cannot Be Serious podcast that he was in a ‘good spot’ with both his ex-wife and Garry, but admitted the process of reconciliation had ‘taken time’.